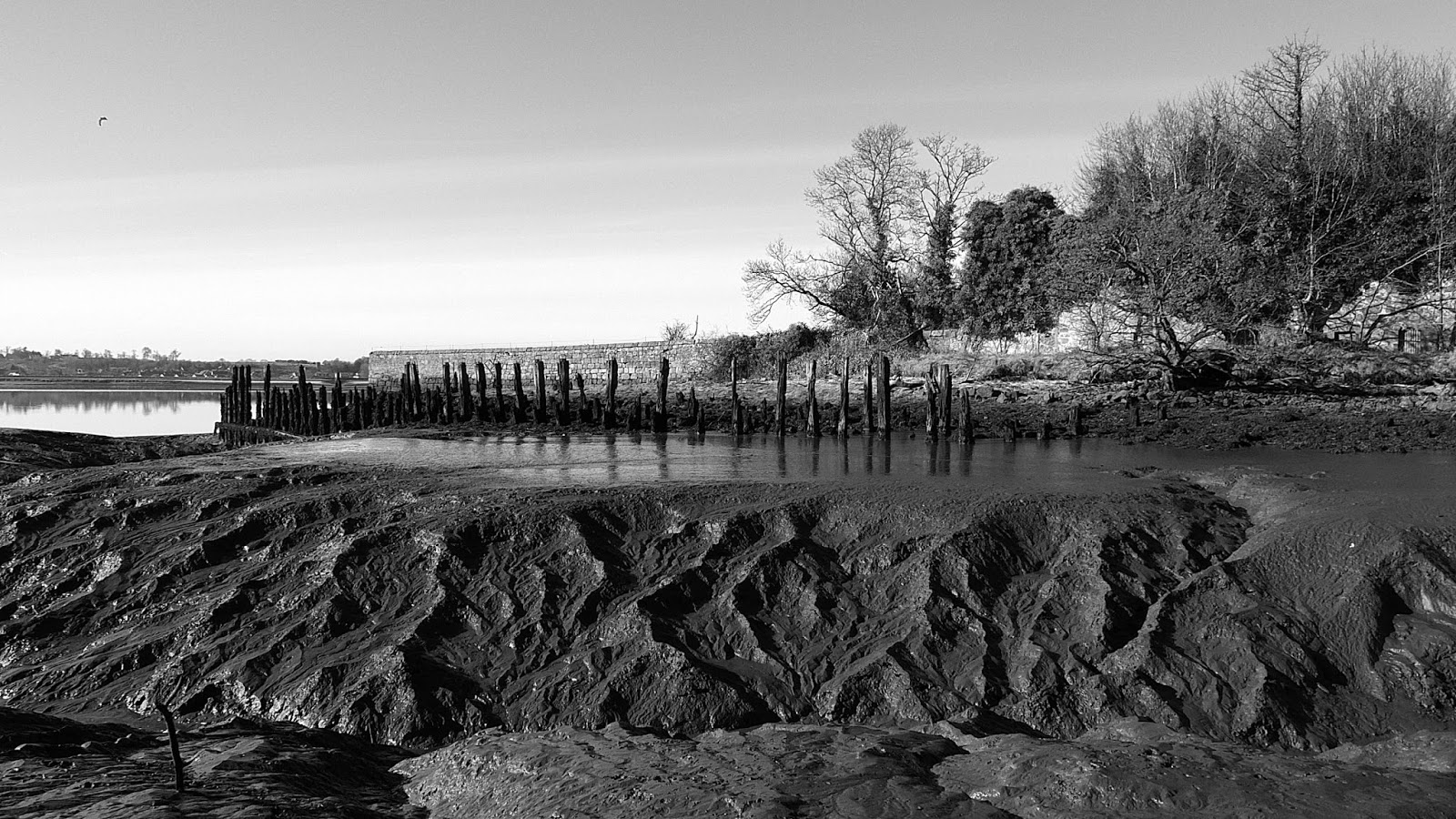 Earlier this year I discovered Kennetpans distillery and needless to say even now I’m still in awe of the site. My visit was akin to an Indiana Jones expedition as a mythical discovery was made and documented. It’s certainly the nearest I’ll get to such a feeling minus the fedora hat and bullwhip.
Buoyed by the initial visit I returned and took along Crystal who wanted to discover this lost distillery for herself. It was a stunning Sunday morning with the Forth tide firmly out thereby exposing the historical former port of Kennetpans. From here this once mighty distillery shipped its produce far and wide. Returning more prepared, armed with existing archaeological information, I was actually in a better position to take in what I was seeing. After a few hours on site we met the owners for a cuppa and discussion, before going our own way.
You’ll have heard of this #whiskyfabric concept if you’re a whisky enthusiast. I’m not sure if its an actual club but its more like a whisky-hood of goodness. I don’t necessarily subscribe to being a member of anything. Truth be told if you say right, I’ll more than likely say left and take a less beaten path. Ultimately we’ll all meet at the exact same destination and achieve whatever goals we had in mind.
In all honesty I’m more a subscriber to treating folk how I would want to be treated. Everyone I’ve met in the whisky world has been so kind and generous it makes you feel disappointed that the real world (that one outside of whisky) isn’t the same. It would certainly be a better place if it was. So whenever I can, I’ll show the same generosity and kindness that others have shown me. Whether that’s donating a bottle for a charity auction or driving #thetormore4 around Speyside for a few days, or even entertaining travelling whisky anoraks, it’s my small part of keeping that good vibe waterfall flowing.
Returning to the conclusion of our Kennetpans distillery tour, Crystal and I said our goodbyes and exchanged some whiskies. My Canadian friend handed over a very generous selection including the Lot No.40 Pot Still Canadian whisky which I recently reviewed. The sly dog also included a bunch of ‘secret’ whiskies which means a blind tasting and I’ll be discovering these in a moment. Well not exactly right now as its 0727 on a Saturday morning but you get what I mean. I only do Glenkinchie for breakfast. 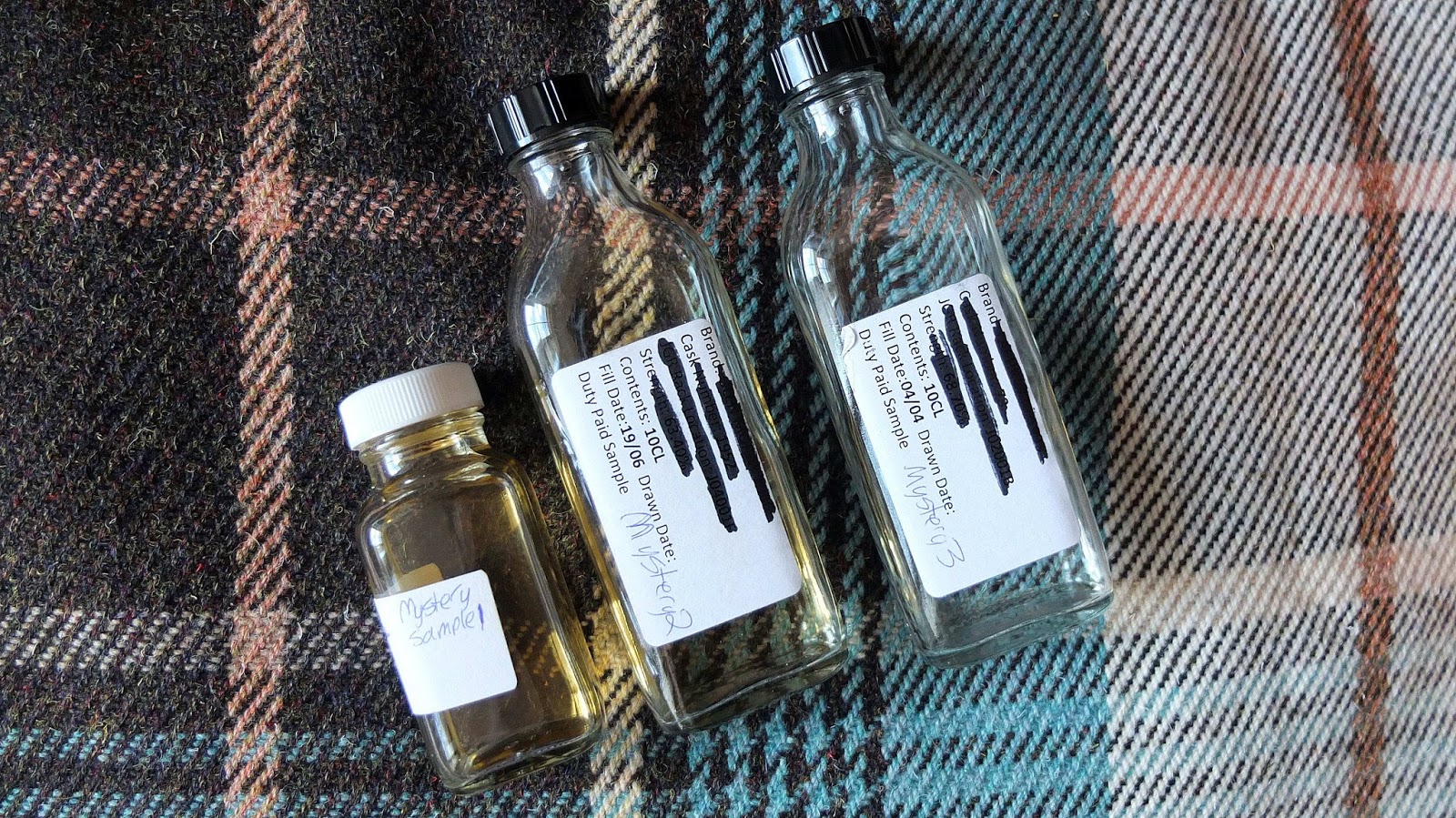 Before the drams an apology for the delay in writing this piece, as my whisky friends are always generous. So much so, there is actually too much whisky here at the Whisky Rover chateau at times. I’m very proactive and health conscious as we all should be. A little goes a long way, which means having a sensible intake and even skipping an alcoholic drink every few days of the week. Hence right now – before Crystal forgets what they are – we’re going into another voyage of discovery. Pass me my bullwhip, brown fedora and a few Glencairns please.
Mystery sample #1

Colour: a light tan brogue
Nose: roasted coffee beans and fennel, a little yeast. Rich Tea biscuits and a sense that this fella is a little tight. Water added. Now some rock salt and pine resin appear.
Taste: gentle and modest are my initial impressions. Nothing that grabs you immediately. The char of the cask, vanilla, a little furniture polish and walnuts. A fresh Scotch pancake garnished with melted butter. I actually prefer it without water on the palate but it remains very easing drinking.

Overall: one that’s perfectly drinkable without grabbing any headlines. A solid whisky but one that sticks with the crowd.

Colour: cream soda
Nose: a vanilla custard with caramelised apples. There is a hot cross bun given time in the glass coming through; that combination of a sweet bun with currants and icing. A little lemon and mint rounded off by a floral perfume note.
Taste: oh that’s really odd. Very fragrant and airy without much body it must be said. Parma violets, rose petals, more mint and frankincense. It almost reads like a gin but without that pungent industrial feel.

Overall: I’d lay this one out at a tasting as the starter dram. There isn’t much of a finish or any bold, palate freezing flavours but it is a great way to start a conversation.

Colour: spring water as its clear as
Nose: a little rusty around the edges this one with the alcohol noticeable.
Taste: very tepid and Jura-like on my palate, not feeling any loving character here. Some aniseed, brown sugar and floral notes but its just too watery.

Overall: nope not a fan. Is this Jura new-make?

So what were these mystery samples? Well, Crystal finally revealed all with the answers being:

Ah a Jura, I feel violated once again and doesn’t change my outlook on the distillery; I’m still on an expedition to discover a great one. I’ve not had mescal previously but I have heard it debated by whisky enthusiasts looking elsewhere given the recent price hikes. Fun but on the basis of these two, nothing I would seek out and purchase.

Thanks Crystal for trying to poison me!
CategoriesUncategorised