Followers of Whisky Rover via other channels such as Instagram or Twitter will know that the main focus of 2016 from a road trip perspective was the Spirit of Speyside Festival. This was a welcome return to Speyside following my last foray in 2014. This ultimate whisky gathering has continued to evolve and expand considerably. It is highly regarded by visitors many of whom come from across the world to the heart of Scotland’s whisky heritage.

A group of like-minded enthusiasts (now written into whisky folklore as #thetormore4) had booked a cottage on the grounds of Tormore distillery as our war room and accommodation during the festival. Yes, there was no escaping a whisky influence night or day! Sadly for 2016 the distillery wasn’t open to the public (events tend to be a rotational basis to ensure annual variety), but we had managed to blag our own private tour thanks to the considerable tweed charms of Mark at Malt-Review. This will feature in another piece when I’m able to sit down and compile my notes.

On my part I wanted to explore the whiskies of our host, as despite Tormore being regularly bottled as a single malt since the 1970’s, you rarely see it reviewed or discussed. The spotlight on Speyside tends to fall elsewhere to those high flying distilleries such as Balvenie, GlenDronach, Glenfiddich, Glenlivet, Macallan and Mortlach. This overshadows the wonderful distilleries in the region that seem content to do their own thing such as Aultmore, Auchroisk, Benrinnes, Benromach and Tamdhu just to highlight a few. For such a relatively overlooked malt there are a surprising number of bottlings officially spanning the decades from a distillery that commenced production in 1959. 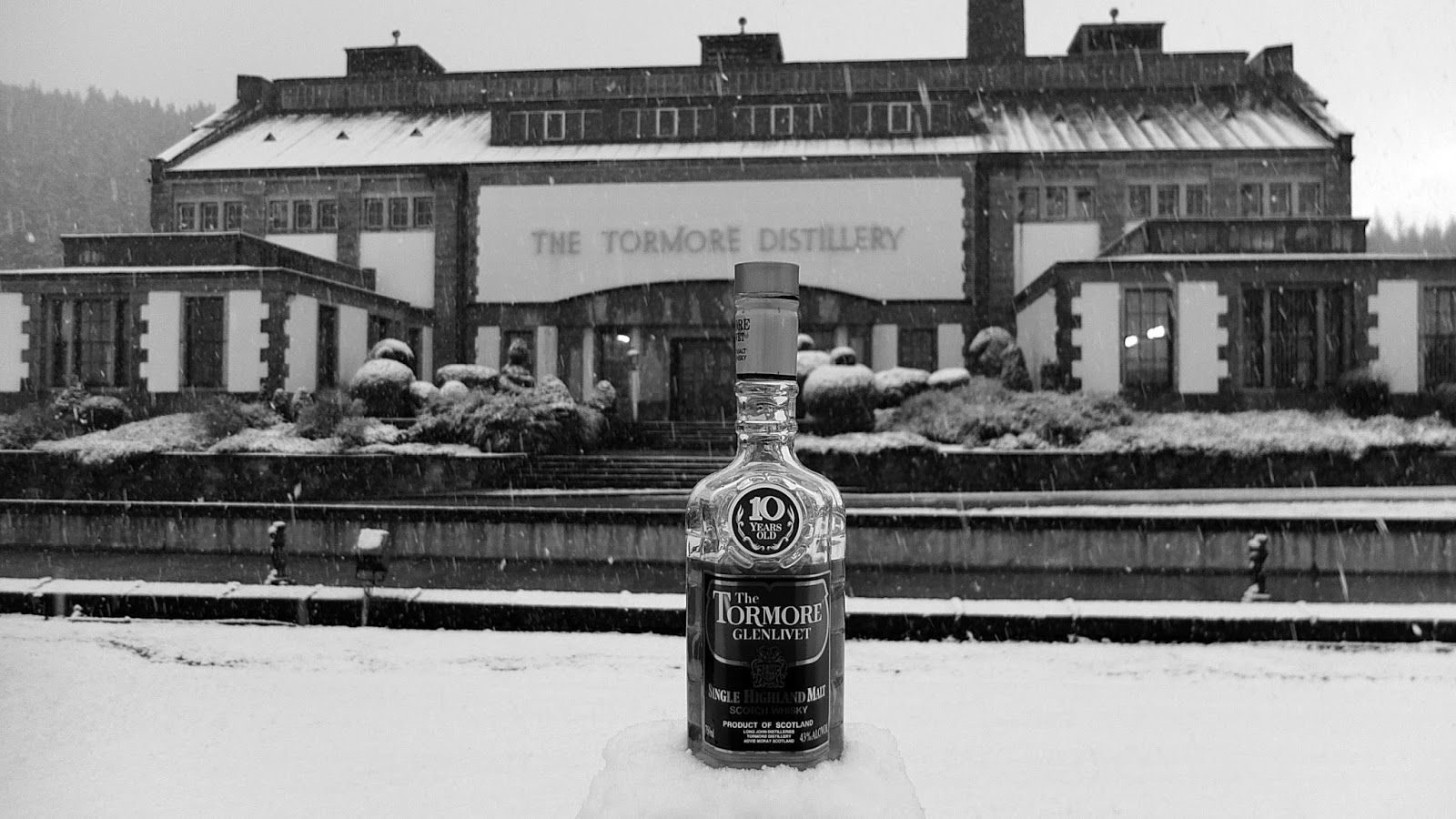 The only way to experience and develop an appreciation is I find through a vertical tasting whenever possible. Since confirming our Festival bookings in October 2015, I had slowly acquired several Tormore’s through a variety of cunning means. In fact it was my most commonly bought whisky in the run up to the festival, as I pursued what hopefully would be on paper at least a definitive assortment. A memorable tasting to honour our host and the returning of several examples to their place of birth to be opened.

In total our Tormore tasting numbered nine bottles that encapsulated the official range since it’s humble begins in the 1970’s with a rare 10 year old repatriated from the Spanish market.

This was certainly the most expensive bottle on my part. We were kindly given some of Tormore’s new make spirit after enjoying an exclusive tour of the nearby distillery. Any vertical worth its salt should start with the new make shouldn’t it?

We then leap into the 80’s with particular attention for what I dubbed the ‘hand-grenade’ bottle design that was available as a 5 and 10 year old some what influencing the neck of the current 14 and 16 year olds. For the tasting we’re going with the older hand-grenade example and I had some doubts over the fill level which seems to be as a result of the odd bottle design. Thankfully any concerns evaporated once we allowed the whisky to settle in the glass.

Into the 1990’s we have an example bottled for Victoria wines again at 10 years of age, before an older bottling from Allied Distillers. We then transcend into the new millennium with the 12 year old blue bottling before taking in a 16 year old from the current range only launched in 2014. We also have representation from the independents with offerings by Signatory and Hunter Laing.

All of these bottles were opened during our residency for our group and any visitors who wished to drop in and catch-up, whilst experiencing the produce of our grand looking distillery neighbour. My own tasting notes were initially commenced over the course of the festival. Being the designated driver I did look forward to returning to the whisky room each evening to final saviour a dram, or two, or maybe three if it was a long day. Particularly whilst #thetormore4 kept social media updated. A more thorough and sedate tasting was performed in the comfort of my whisky den post-festival. 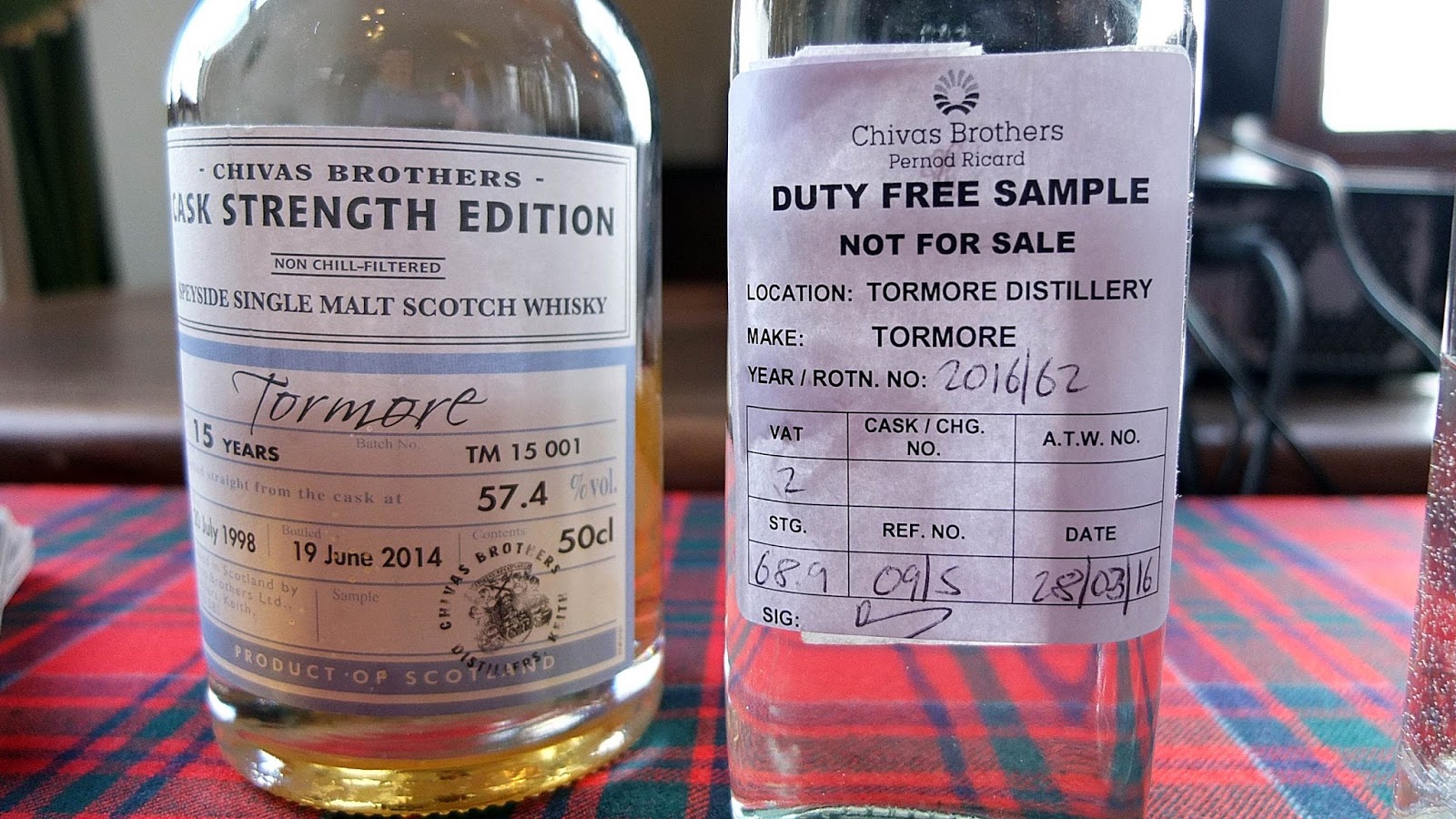 Colour: what’s the point?
Nose: a real chalky, lime aspect almost verging on herbal freshness with fennel, basil leaves and some aniseed. Sweetness from refined white sugar cubes and white milk chocolate.
Taste: a real carnival with an arrival of sweetness that goes sour and then a prolonged sweetness on the finish. A corn mash, fluffy potatoes, icing sugar, some caramel, dry crackers and again that herbal element towards the end.

Overall: a really interesting nose compared to some of the other new makes I’ve experienced recently. This Tormore takes a different route. It’s pungent but not reeking of alcohol or lacking character. I’d happily drink this!

Bottled in the 1970’s for export, this represents the first official bottling.
No strength stated but we felt its likely to be 43% vol

Colour: a chardonnay-like appearance
Nose: very green and malty initially. A strong emphasis on cereals and sharp green apples and green peppers. Given time toffee arrives, caramel wafers and with water coconut and wine gums.
Taste: a light caramel and some home made tablet. A slight spent match and Ovaltine. With water bitter dark chocolate. Given time vanilla pod and marshmallows with a prolonged aniseed finish.

Overall: hugely original and distinctive. I’ve never tasted such an avant-garde whisky as this before. Very bold and certainly like nothing being bottled nowadays. It might not be to everyone’s liking or palate, but its a maverick malt and I love it.

Colour: a light hay bale
Nose: muted initially with oranges and pineapples and Jacob’s crackers. Milk chocolate, barley sweets and a buttery feel but little else here.
Taste: very creamy with vanilla and Rich Tea biscuits plus a light and oily aspect. White pepper, oat cakes and plenty of malt 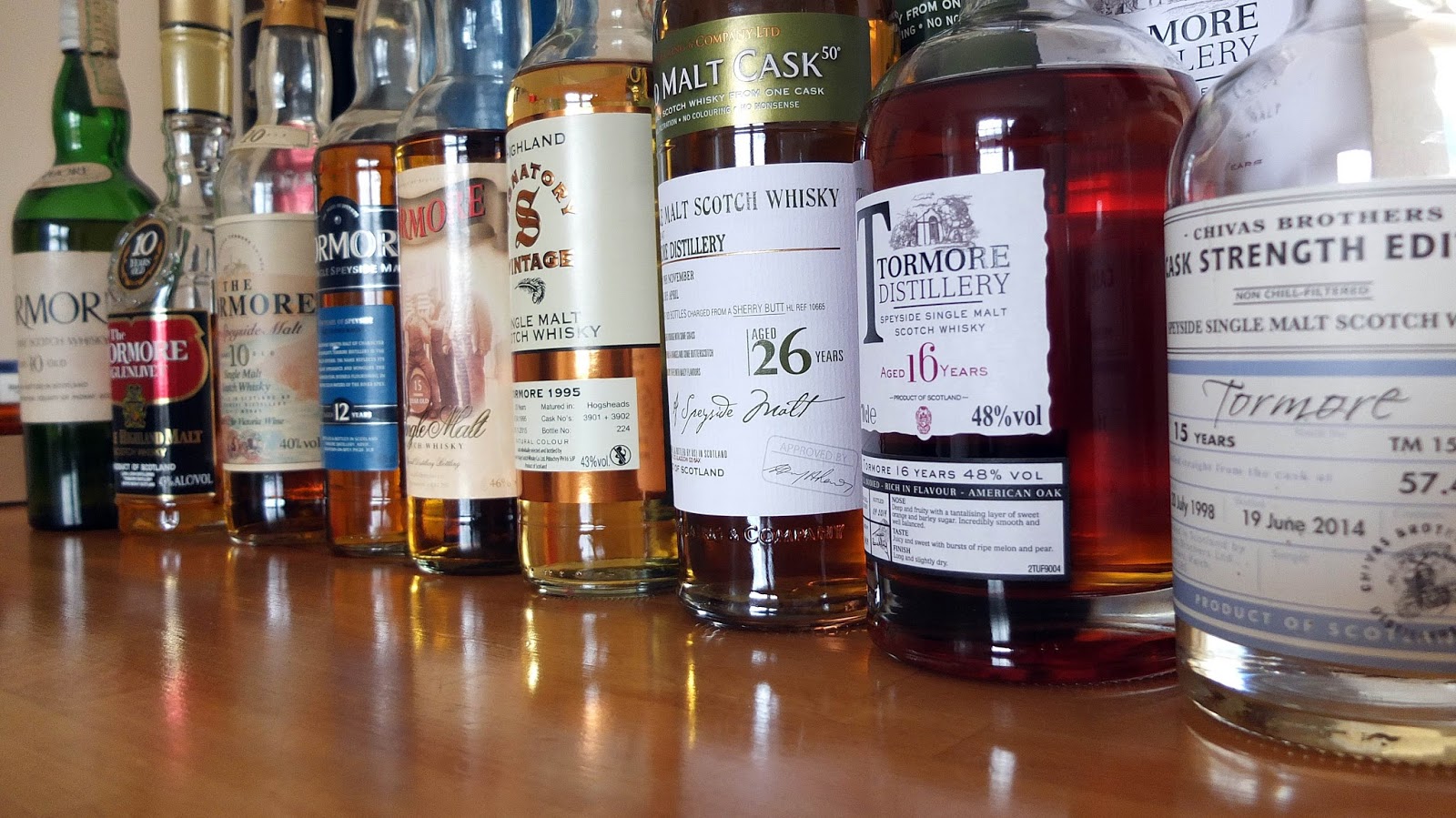 Colour: honey
Nose: apples and cinnamon with a woody wetness. Vanilla and white chocolate with a mossy aspect. It does smell dunnage with cereals again and more oranges.
Taste: again that malty aspect runs strong once more. Coconut is noticeable as is hob nob biscuits for that oaty aspect alongside a bit of rubber, milk chocolate.

Overall: enjoyable and a crowd favourite amongst our group. Restrained and understated its an anytime drinker.

Bottled circa 2003 with the distinctive blue design, official bottling, 40% vol

Overall: bottled as the Pearl of Speyside this was a favourite during our Tormore residency. Such an easy, relaxing drinker even though it is limited in some respects it does appeal as a classic Speyside example. One we kept on the table and returned to each evening.

A rare Allied distillers bottling, from the mid-90’s 46% vol

Overall: simple but effective. A pleasant enough sipper for an evening without too much effort required to appreciate.

Colour: builders sand
Nose: pineapple chunks, vanilla, some kiwi fruit and lemon posset. Ice cream wafers and a flowing waxy characteristic. Buttercups underlines this summer-feel of this whisky.
Taste: it just flows across the palate underlying its quality. A little more of that wax appeal, the char acting as seasoning giving it an edge lacking on some of the previous drams. Caramel, syrup and more oats. Aye could be a liquidised melting pot of flapjacks, caramel wafers and fudge. Pears poached with some vanilla pod and honey thrown in for good measure.

Overall: gentle and elegant. The height of sophistication? I picked this up on a trip to Paris (see I did hunt high and low) and it was around £40. A true bargain if you can find a bottling. There’s something about when 2 casks are vatted together it just amplifies all the goodness; something I’ve experienced in recent Cadenhead Littlemill releases. 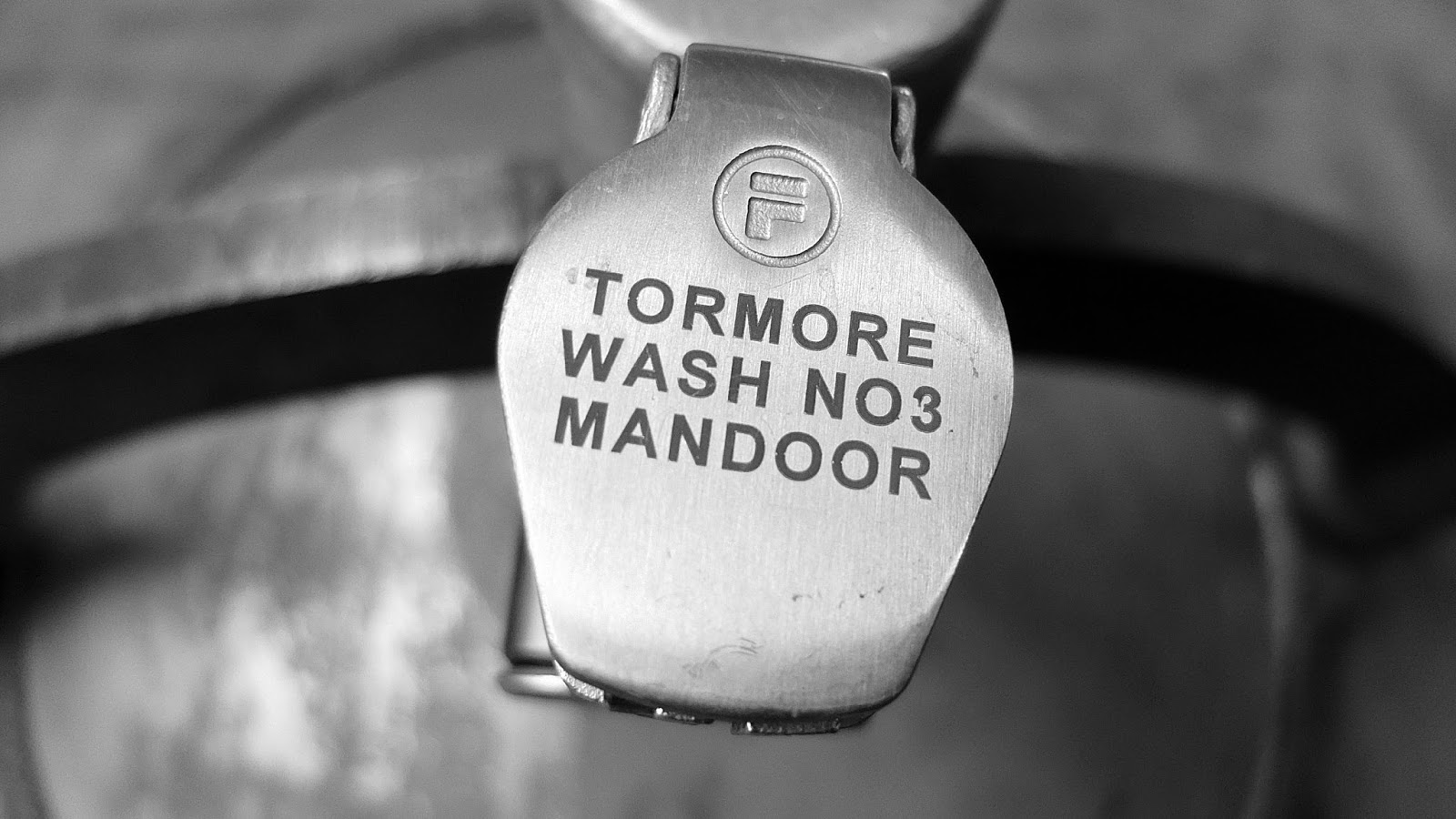 Overall: we had to feature a sherry cask and this is a great understated example of how harmonious Tormore can be with other cask types.

Colour: lemon juice
Nose: oh some lemons actually, pine cones, a minty freshness, wood chippings and a pink lady apple. Malted brown bread and a slight leathery note.
Taste: despite the high strength its refined and drinkable straight. Apples and vanilla remain strong on the palate. A nutty aspect, lemons again, a bag of sherbet and some orange peel.

Overall: some value to this bottling as Tormore has been freed of the shackles evident on previous official releases. A lot of fun and enjoyment here.

Colour: melted caramel
Nose: a mix up of dark chocolate with orange oil so a Terry’s Chocolate in a glass. A passing floral note, citrus fruits, a mixture of assorted bar nuts and barley sweets. Water draws out peaches and apricots alongside the orange.
Taste: a sherry taint so some cinnamon, ginger, oranges, breakfast cornflakes, red pepper and melon. With water more roasted coffee beans and wood chippings.

Overall: there must be some artificial colouring as its unlikely to be natural. Compared to earlier official bottlings this feels rougher around the edges somewhat. Lacking that gentle nature it’s more forceful and uncouth with some unusual features. A bottle that warrants further exploration I feel overall.

By collating this vertical each member of our group has a new found appreciation for Tormore that continues to be regularly bottled and is very affordable in what is an expensive time to be a whisky enthusiast. Whilst we will always be known as #thetormore4 and shall continue our residency at the distillery, there is a debate over which distillery should be our next vertical victim for the festival in 2017, or if there are more Tormore delights out there. I’m sure there are more bottles to discover. If you see us on Speyside make yourself known as we always travel with a bottle of Tormore at all times and love to spread the goodness.

My thanks to Chivas Bros for allowing us to tour the Tormore distillery thereby paying homage and for being such generous hosts. Also to Pery for organising such a wonderful festival experience.