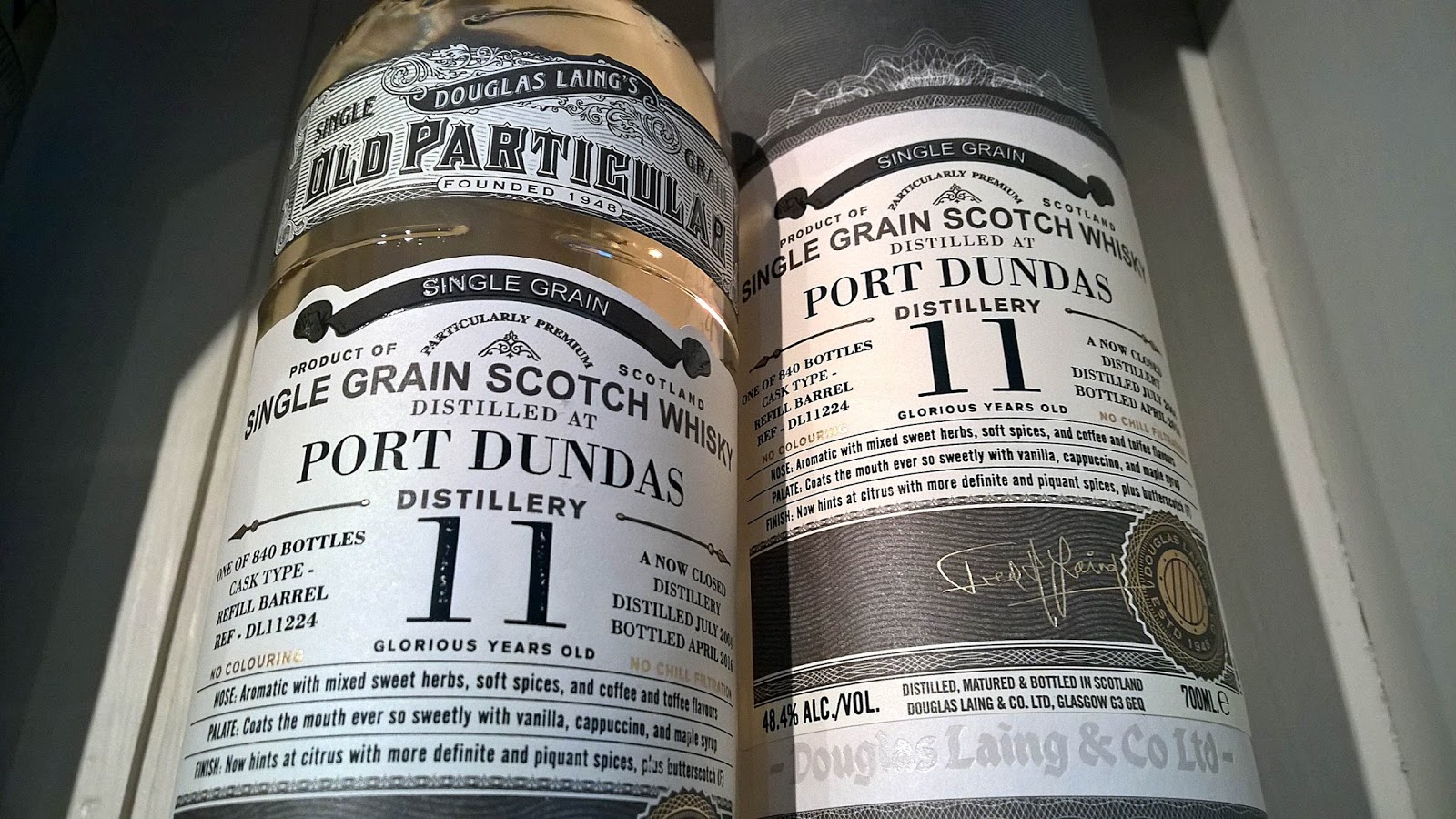 It’s always pleasing to see grain whiskies being bottled and enjoyed. At times its a secretive society of appreciation. Saying you enjoy a grain whisky is almost as detrimental as stating you enjoy a dram of Jura.

Normally grains in my experience don’t flick into their top gear until they hit at least 20 years of age. There are of course exceptions with a recent one being the excellent Signatory 16 year old Ayrshire grain that ticked quite a few boxes and represented great value. Today we’re back in Glasgow once again, which I recently reviewed as the Cadenhead 27 year old Port Dundas release; a very tasty sweetie of a dram.

This particular bottling comes from the Douglas Laing Old Particular range of releases. If you haven’t read my recent Douglas Laing vertical tasting as part of the Speyside whisky festival then please do so. A mixed rollercoaster tasting in summary, but ultimately one that shows you to have to persist and taste to find a whisky that meets your liking. A thumbs up for the presentation on display here as its informative overall with everything you need to know on the bottle.

Port Dundas of course is no longer with us having closed in 2010. It’s always disappointing to hear of any distillery ceasing production, but for grain distilleries they never seem to trigger the same outcry as a malt distillery. The methods may differ slightly and grain is by default more mass produced but they are both enjoyed and appreciated.

Much like any distillery, Port Dundas had a history stretching back into the early 1800’s and a proud one at that. For instance surviving the pricing issues of the 1860’s, where values fluctuated hugely for grain distilleries, prompting several to close such as Haddington and Seggie. Surviving grain distilleries including Port Dundas came to an agreement to control production and thereby lever some control over a decent and sustainable price for their whisky. Other grain distilleries within this agreement included such wonderful names as the massive Caledonian in Edinburgh, Cambus and Carsebridge (both now closed) along with Cameronbridge and a couple of others. 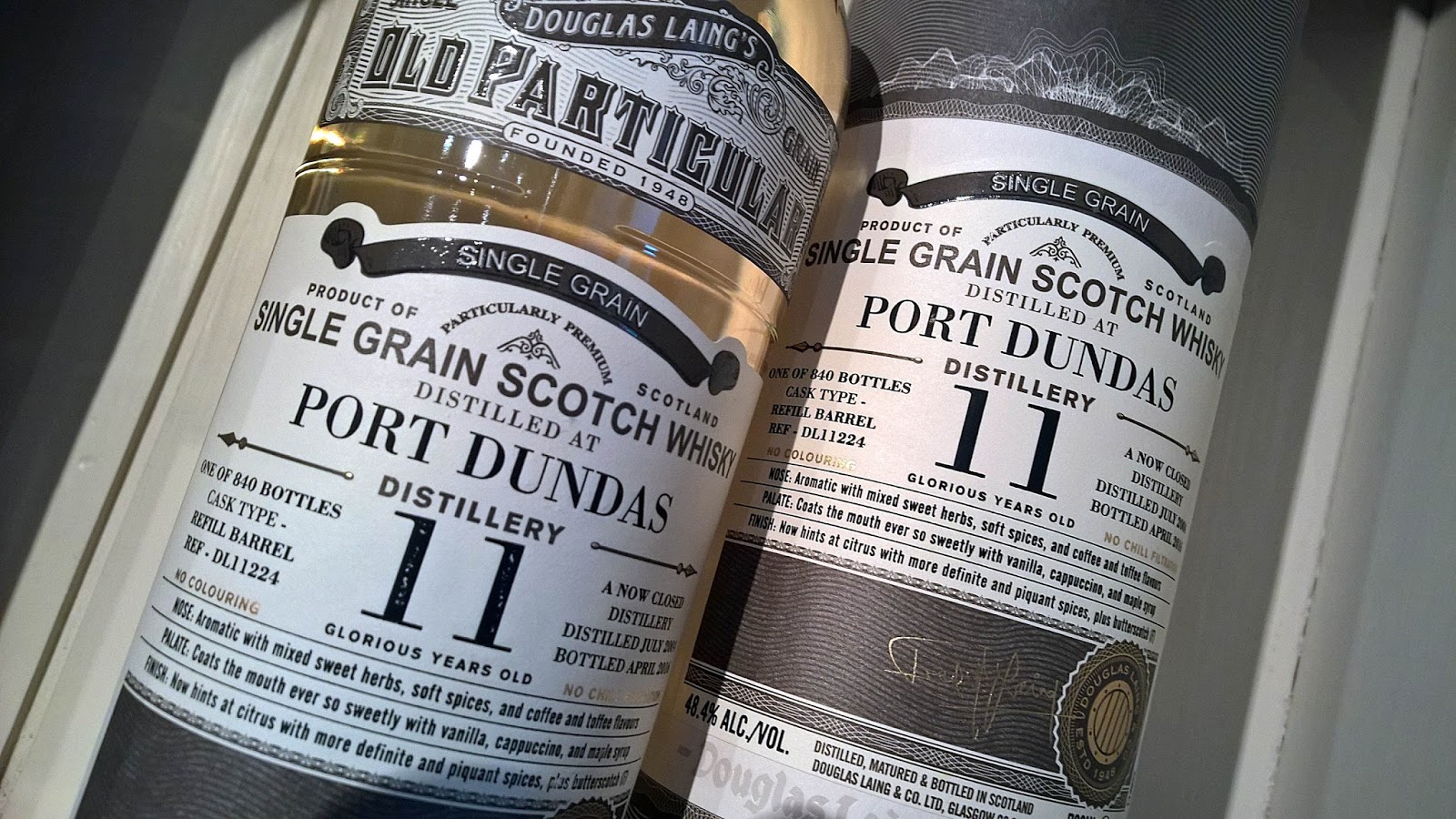 You know what, I’ve never actually had a bad Port Dundas. It always has character which many of the remaining grain distilleries lack. Your Port Dundas, Cambus and their ilk may have been very old and outdated, but the genesis was in the spirit they produced; it was distinctive. Nowadays many grain whiskies seem efficient and clean cut. In other words they lack that edge and robust nature that some of their forefather distilleries somehow exhibited.

Enough about grain whiskies for now, lets have the bottle details for this Douglas Laing release and then my tasting notes.

Colour: a lime cordial
Nose: pears and apples a real fruit salad concoction. A very light breezy floral freshness, cottons sheets drying on a hot day? Marzipan, cream soda and in the back row there’s a delicate layer of spicing with nutmeg.
Taste: a blast of sugary sweetness. Pears, condensed milk??? It has that texture and rush of melted sugar with apples and icing sugar.

Overall: on the palate its limited which goes back to what I was saying about grains and ageing. Yet there’s character here and the personality of the Port Dundas grain spirit showing cleanly through. It’s probably a little overpriced for what it is given the age but how often can you experience a closed distillery for under £100 these days?

Very enjoyable and easy drinking. A fine way to open up a tasting.