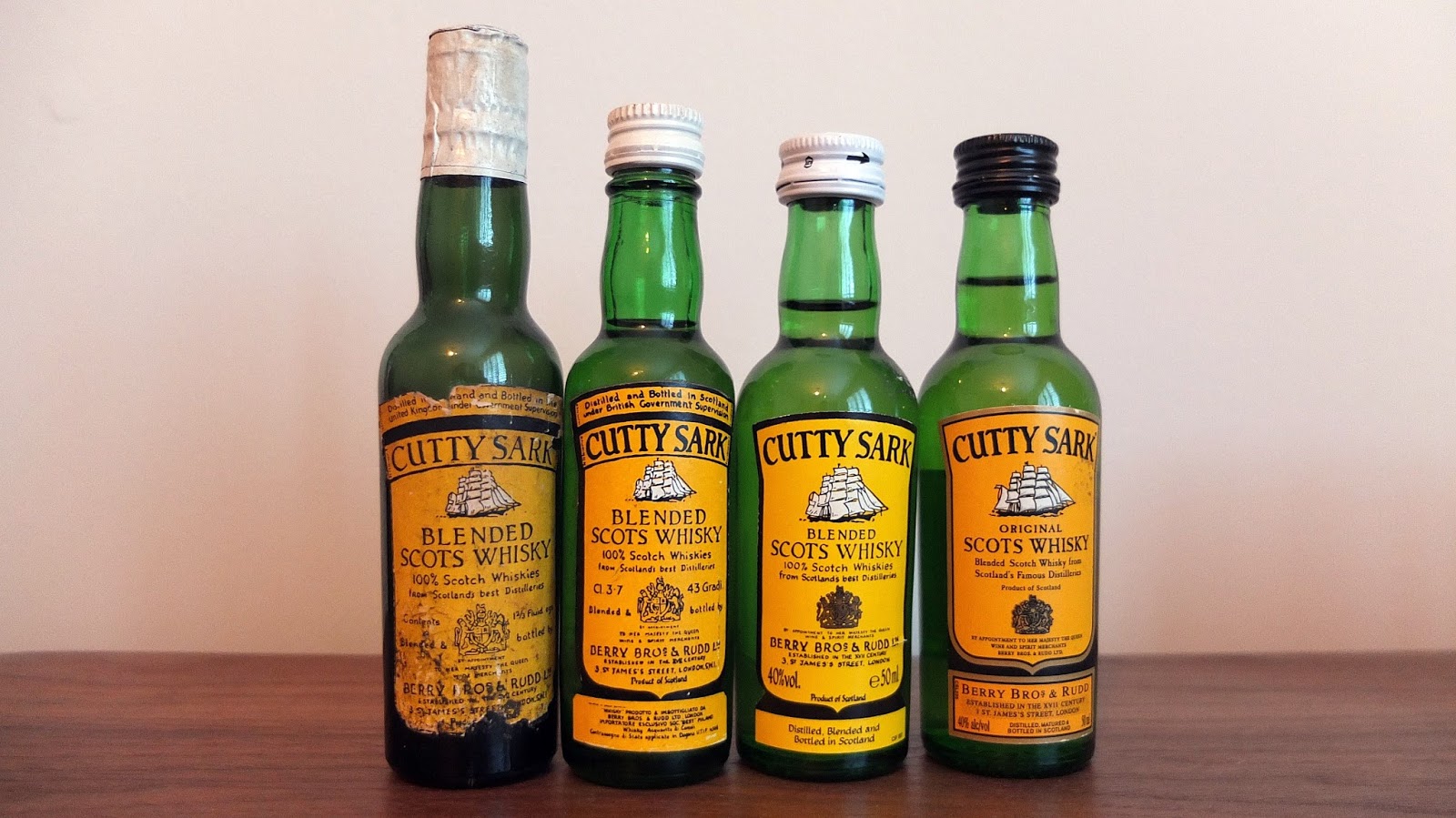 It’s another vertical tasting but I’m breaking away from the focus on a single distillery to instead concentrate on a famous blended Scotch whisky. In this case its Cutty Sark, originally created in 1923 by Berry Bros & Rudd to cater for the then, growing blended market.

The London merchants wanted a blend of the highest quality and it proved to be extremely popular. It remained in private hands until 2010 when Berry Bros swapped Cutty Sark for the Glenrothes single malt brand. Now under the guidance of the Edrington Group, the Cutty Sark range has been expanded and recommissioned.

My own interactions with the brand have been very limited until this vertical piece. The most memorable Cutty Sark by far was the sublime 33 year old Art Deco edition, which formed a part of a very enjoyable tasting evening. Created by Master Blender Kirsteen Campbell, it remains my most highly regarded blended Scotch whisky. In some ways this experience prompted this feature and the opportune acquisition of auction of several miniatures that form the older end of the spectrum here.

Whilst I know blends from the 70’s and 80’s offer more flavour than their modern day counterparts from experience. I wanted to sit down with a widespread selection from one specific brand and track that shift in greater detail. So here it is and please enjoy.

Colour: hay
Nose: forceful presence of grain initially with bananas. Then we wait for the yeast and lemons to arise from their slumber. Some golden syrup and a light and airy nature throughout with Rich Tea biscuits being most identifiable.
Taste: a refreshing nature but lacking character. Vanilla and honey with more yeast.

Overall: a disappointing opening for this once speedy tea clipper. This is the nature and standard of blends today and generally reflective of my experience before we step back into time. Only then can we appreciate what quality our purchases once offered.

Colour: honey
Nose: not much more here compared to the original blend. One thing is noticeable and that’s the impact of the grain is diminished. There’s a floral note in the shadows, a lightness once again. A whiff of orange then any sense of a storm peters out.
Taste: more creamy on the palate, slicker and less blend-like with the grain influence continuing to be held back.

Overall: if this is storm then its only in my kitchen sink. Better than the Cutty Sark original but nothing to change tack for.

Cutty Sark Prohibition
50% vol, around £23 a bottle
A premium expression, with an old-skool characteristic. Mmm, whatever but it is a release I’ve wanted to try, so here goes.

Colour: honeycomb
Nose: a little leather smeared in toffee – quite a mess but in a good way! Vanilla and what I’d describe as a robust malt loaf with a little banana.
Taste: very approachable really, a creamy toffee with a slight nutty edge. The extra strength doesn’t come through as pure alcohol.

Overall: all that marketing about old character and its something it truly doesn’t possess. However on our voyage of Cutty Sark’s this one is so far the most enjoyable and drinkable.

Cutty Sark Caskstrength & Carry On
51.4 vol, around £38 a bottle and limited to 500 but still widely available
The one the now defunct whisky blog brewed with Kirsteen Campbell – the Master Blender of Cutty Sark.

Colour: a middle shelf Chardonnay
Nose: more fruity than anywhere we’ve been so far. Apples certainly, a Caramac bar for sweetness and a sour green olives. A herbal feature as well; you can tell is more interesting than our previous ports of call. That Rich Tea note again and bizarrely Original Fairy washing up liquid so plenty of lemon.
Taste: a little salty me hearties at last we’re on a voyage! More lemon freshness and whipped cream. A little sherbet and peppery finish. The char of the wood again on the fringes.

Overall: now if this was £20 I’d be happy but it’s a special edition. My criticism would be its an oddity in the Cutty Sark fleet. It should be viewed as a separate entity and more of a mad scientist experiment with a used Cutty Sark label thrown on at the end.

Cutty Sark 12 year old
40% vol, expect to pay around £28
Signalled as more of a deluxe expansion on the main blended Cutty Sark. The Titanic of the fleet if you prefer, so fingers crossed its ship shape.

Colour: a welcoming sunset glow
Nose: a real sweetie with fudge, orange and caramel. Walnuts, honey and vanilla in the mix. A little water brings out peaches and pecan.
Taste: it’s all a little dull to be honest. It’s stuck between a very bland Speyside malt like Glenlivet and a bargain supermarket blend. It ticks the core approachable characteristics; honey, vanilla, almonds with lemon balm and a touch of basil.

Overall: well I can confirm this one doesn’t take water very well suggesting its fragile nature. Those masts have seen better days certainly. It’s all a little tired and insignificant. 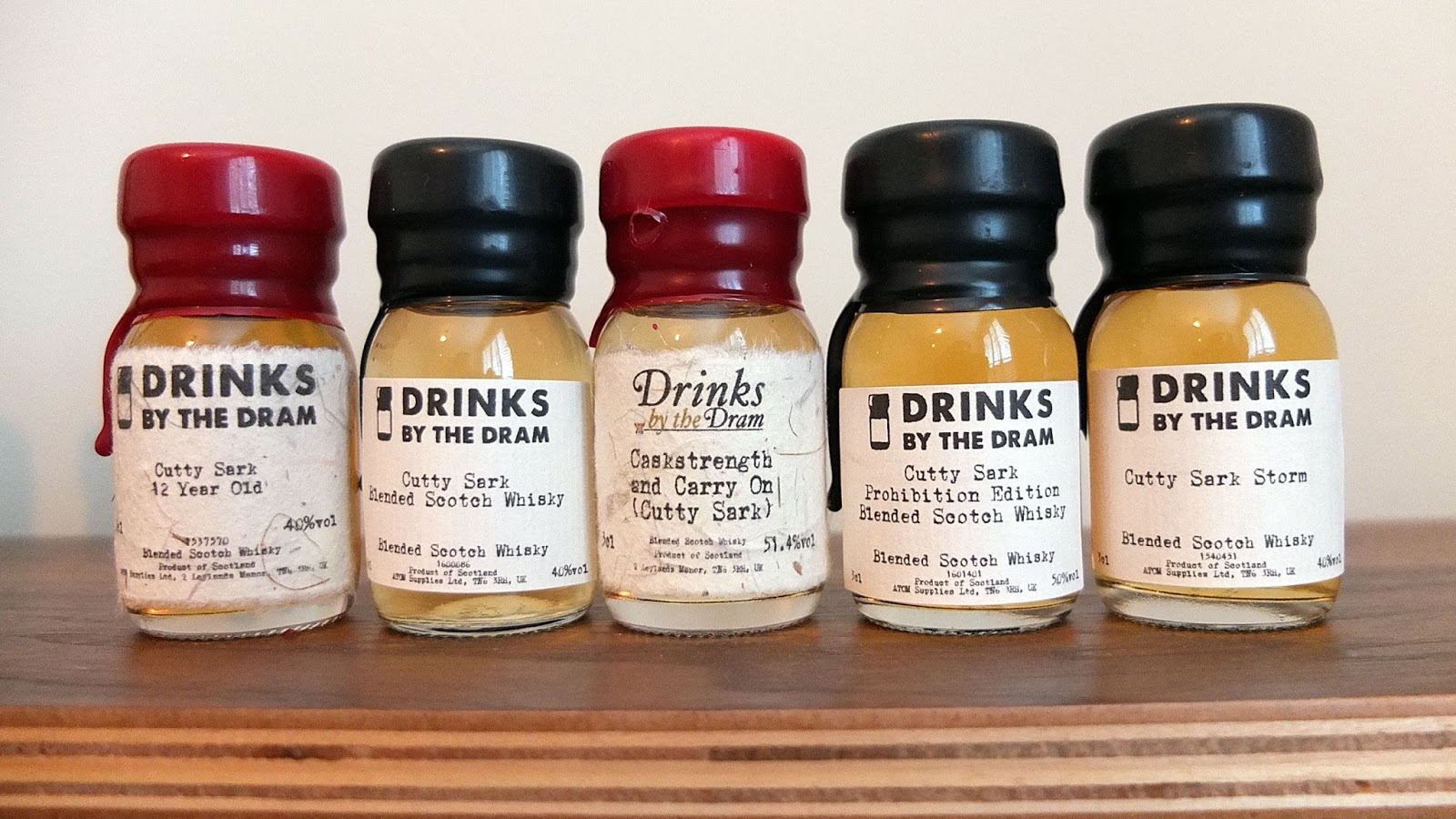 So we’re at the midway point of this vertical and we’re changing course and bringing out the big guns as we go back in time. Now this should be very interesting.

Colour: apple juice
Nose: buttery toffee, lemon, melon and a real thrust of wood. There’s also a distinct perfume aroma around the fringes
Taste: a little flat so this is a bottle effect despite a reassuring fill level and intact seal. Almonds and apples certainly, vanilla custard and an overall bland inoffensive experience.


Overall: harsh to judge this on this sample which I feel its slightly spoiled and that’s unfortunate.

Colour: dry straw
Nose: fresh apples, white pepper and caramel yet there’s a distinctive off-note that means this sample is spoiled.
Taste: for this piece I did taste this and its vile despite again an intact seal and good fill level. Makes me wonder how many of these miniature collectors are sitting on huge quantities of whisky that are only fit for the drain.


Overall: such a shame but at least this makes Jura look like a Brora. Fingers crossed the older miniatures have not decayed otherwise this vertical is finishing on a low note.

Colour: a darker oak than the previous 2 examples
Nose: a really sweet vanilla followed by juicy apples. A more promising introduction certainly. Pancakes and syrup. There’s a crispness, almost wine-grape-like freshness here. Malty toffee and ginger rise from the depths with the addition of water.
Taste: immediately I’m thinking a higher malt content and less acid-grain. By this I mean some modern grains are so industrial they cut through the palate, but thankfully here that’s not the case. A nutty note and more oat cakes. Herbs on the edges here, very odd but which one? Tarragon and sage I’d say. More creamy toffee with water and then walnuts. Very little of a finish it must be said,

Overall: I like but nothing massive to shout about really. Just a solid old-style blended Scotch, or is that Scots? Very drinkable and mellow that doesn’t tax the drinker into coaxing out deeper characteristics. A solid example.

Last but not least this very old example with a slightly reduced fill level. I’ve tried to date this going so far as to ask Cutty Sark (nae reply) themselves. Someone suggested 1930’s online or my initial assessment suggested the 1950’s. Either way its rather old, so fingers crossed.

Colour: now this is golden dark caramel
Nose: again a real freshness on the nose after all this time. Goes without saying vanilla but its the other spices that are kicking out here with black pepper, all-spice, cinnamon and clove. Almost sherry-like in its presentation. Blackcurrants and toffee with some malted fruit loaf. Delicious.
Taste: very gentle and just glides across the palate. More of that malt loaf and cinnamon. Wood tannins, brown sugar and caramel. Again that creamy aspect we’ve noticed before and a gentle finish.

Overall: best nose of the lot but the palate is very refined in comparison without an explosion of flavour. In saying that what is does offer is enjoyable and you’d be reaching for another without knowing it.

The two oldest examples of Cutty Sark stand out above the others. With the slightly younger version edging it, I feel overall in terms of taste. Working through these its noticeable how the blend has changed over the decades and it must be said not for the best. Prohibition was fun but the others are instantly forgettable.

I’m all vertical out now – what next to follow this one?

For this latest Tweet Tasting event Cutty Sark with the Whisky Wire decided to do something rather different. The core attraction was the inclusion of..

It’s all too easy to overlook a blend and head towards the single malt aisle, or mistakenly wander past a collection of dusty unrecognisable blended..