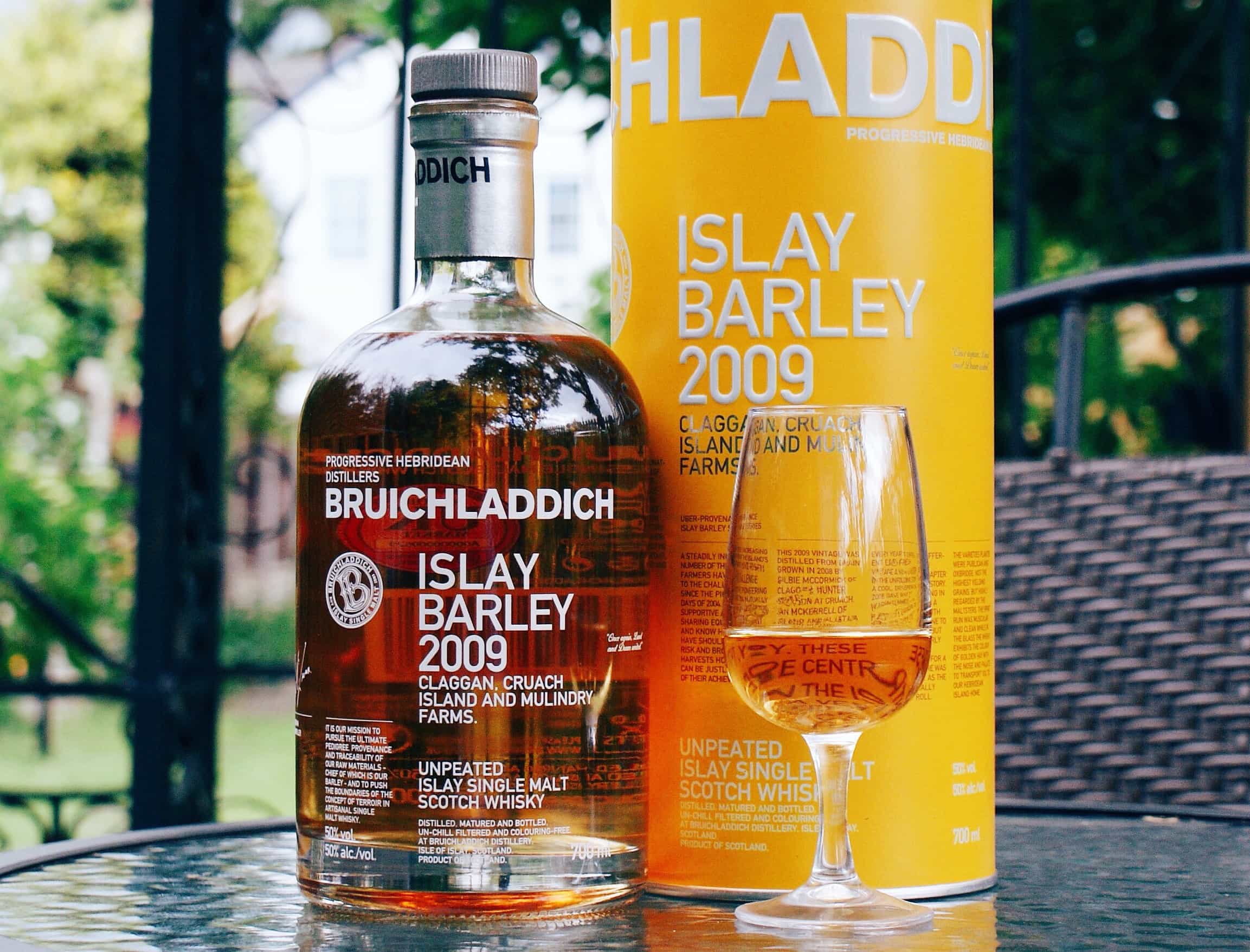 I have thrice before reviewed whiskies from Bruichladdich’s Islay Barley range. First was the 2004 – Kentraw Farm Foreland, then the 2006 – Dunlossit Farm, and a 2007 – Rockside Farm. So I feel I’ve pretty much exhausted all the superlatives about terroir and craft whisky production on those posts. I’ll have to put in £1 into a craft whisky cliché box for every re-hashed phrase I use during this review.

You see, Bruichladdich’s Islay Barley series is about as brilliant a craft whisky concept as you can get. It was pioneered by Mark Reynier, former CEO of Bruichladdich and a man who is still obsessed with barley. The idea is quite simple: to make whisky using barley that comes from a single farm. Whereas the majority of Scotch whisky is made using barley from all over the place, here there is an interest in how the location of the barley can impact upon the final flavour. It’s not exactly empirical stuff, given the fact that a huge number of varying variables constantly influence the taste of whisky, but it’s a good effort at investigating that.

I’ve always felt these Islay Barley whiskies are about more than the flavour though (£1 in the cliché box). The moment you push your money across the table, you’re actually paying consciously to walk away from the commercial considerations and into the world of proper experimentation: and experimentation not for the sake of a gimmick, or of a marketing hook or story – cask finishing has really gone this way in my opinion – but for the sake of… curiosity. Of opening your mind. (That’s another £1 in the box.)

So for this latest release, the Bruichladdich Islay Barley 2009, the barley used in production came from Claggan, Cruach, Island and Mulindry farms. Now, you might think there are quite a few farms in question here, not just the one, but that’s because the farms offered up small parcels of grain and they’re grouped centrally on the island. The contrast here is not so much about one farm to another, but inland to coastal. The barley in question is a mixture of Publican and Oxbridge barley varieties, and the spirit was matured in American oak. This cost £45 a bottle and, as with most modern Bruichladdich whiskies, it’s bottled at 50% ABV. 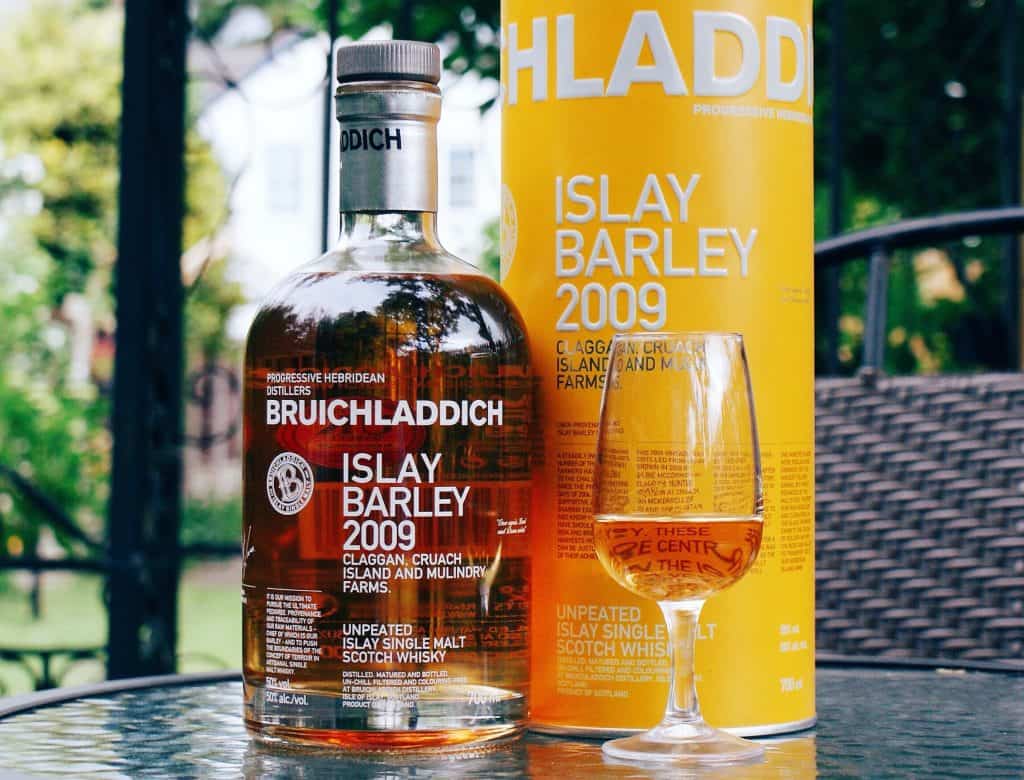 On the nose: honey, vanilla, a maritime note, but once settled it’d dominated by a range of fruits from more tropical pineapple to classic green apples. The fruits tend to change quite a lot, too, and occasionally there are wafts of strawberries, melon, grapefruit. Let it settle even more and there’s some wonderful heady maltiness there, and a beautifully dirty oily quality, and then perhaps fresh linen and laundry.

In the mouth: again a similar start, with the honey, vanilla and brine competing for dominance, before a rush of fruits. Red apples, grapefruit, melon, pineapple, gooseberry. That acidity of grapefruit becomes far more citrus, which in turn dances with the salty brine. Hazelnut praline. Lemons. Straw. Grassy, now: like an Aultmore. Warming ginger, with a little honey coming back. The finish is warm, but not at all woody.

Bruichladdich Islay Barley 2009 is much more of an intensely fruity whisky than any of the others in the series, and I feel there’s a little more going on. What surprises me about this one though is the changing nature of the whisky, a shape-shifting entity that’s risen up from the fields of Islay. It would be fantastic to do a tasting side-by-side with them all, but I consumed all the other editions.

Anyway. It’s a fine whisky indeed. I wouldn’t want the 2009 after or with food: it’s an aperitif, certainly, to be enjoyed on its own in the late afternoon. And it’s a fantastic summer whisky to boot. I need not say that at £45 a bottle, with as much information about the whisky as you can get, this represents very good value. 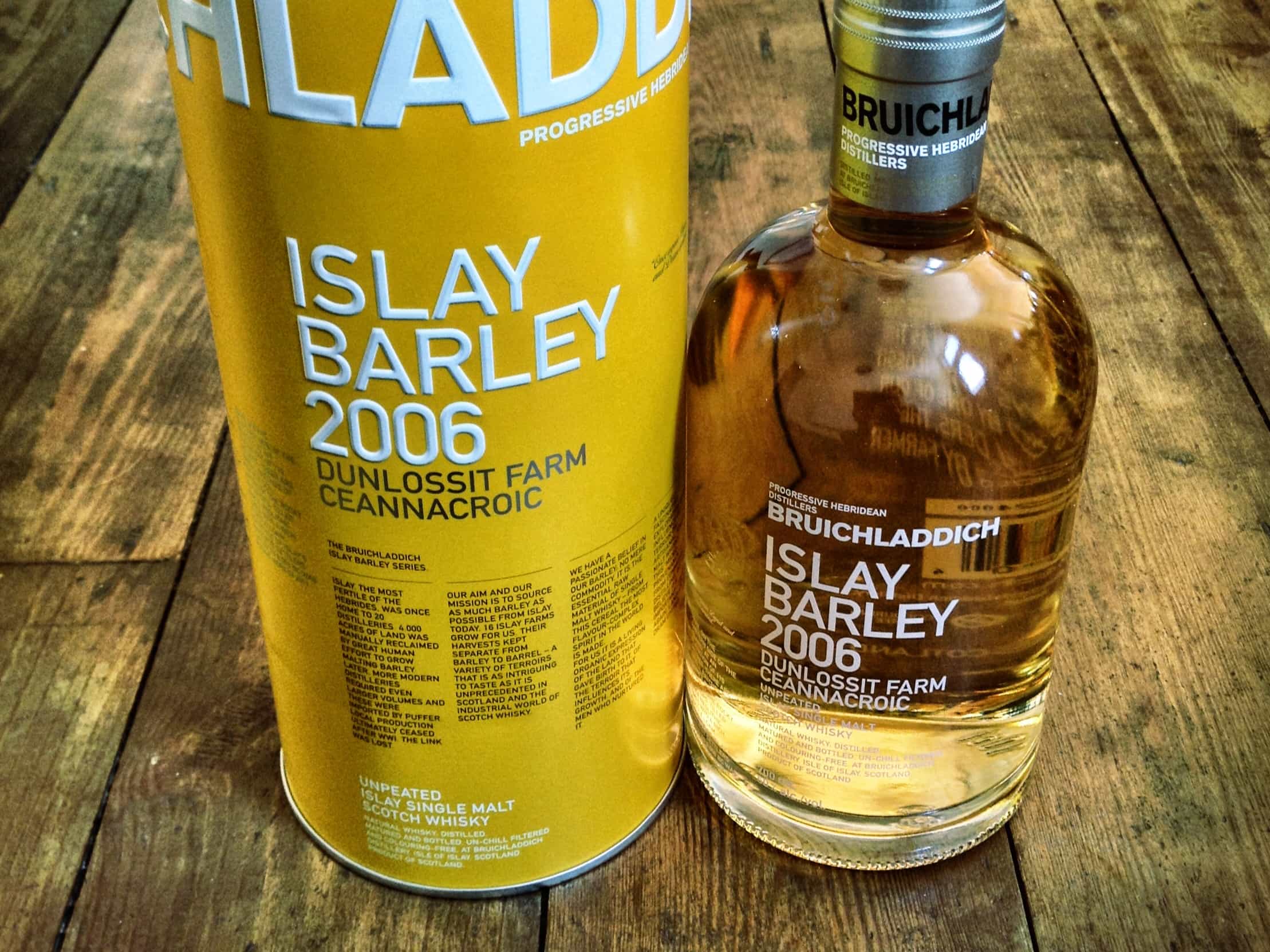