It’s a safe assumption that in the coming years we’ll be seeing many whiskies from the new contingent of distilleries in Scotland. Many of these will have factored into their business model the need to bottle at the minimum age requirement to open up a much needed revenue stream. This is especially true if they do not have a business plan that does not involve gin, a distillery café or a backer with very deep pockets.

So how do you tackle your debut bottling? It’s an interesting area of debate with many possible options with only a handful playing the long game firmly fixed on the motto it’ll be bottled when its ready. For examples see Daftmill or Ballindalloch who have kept or will keep enthusiasts waiting for longer than most. Ideally that’s the best approach as your initial product should be of sufficient quality and well-priced. In doing so your brand appeal isn’t damaged and expectations will grow as will any ground support.

Whereas bottling something that highlights the flaws of your initial distillation efforts and/or is excessively priced could fail to generate the necessary sales to continue the distillery project thereby plunging the site into a vicious circle. It’s a dangerous path that many distilleries are now finding themselves upon with gold bars hanging in the trees and pitfalls on every step. Such hazards are reduced through planning and outside consultants to ensure the new make spirit is of sufficient quality. The only negative might be we suddenly have several distilleries producing a similar type of spirit before it enters the cask.

I find this all quite interesting as you can tell and it brings us to Wolfburn distillery. As one of the earliest distilleries of the new wave, they’re first up on the platform to give us their whisky. Bottling at the minimum legal requirement the team decided to release two distinctly separate releases to celebrate the occasion.

The most limited of these is the Inaugural Special Edition that comprised of just 875 bottles selected from casks chosen by the distillery manager. It was reasonably priced and promptly sold out. The release catered for the collectors market and I’ve not heard any negative comments about the whisky; only the quality of the wooden presentation boxes used. Thankfully a more general release was bottled in March 2016 at 46% strength and can be purchased for around £45. That’s a fair price in today’s climate for what is a young whisky and gives enthusiasts the opportunity to experience it without having to debate whether its worthwhile opening a bottle. 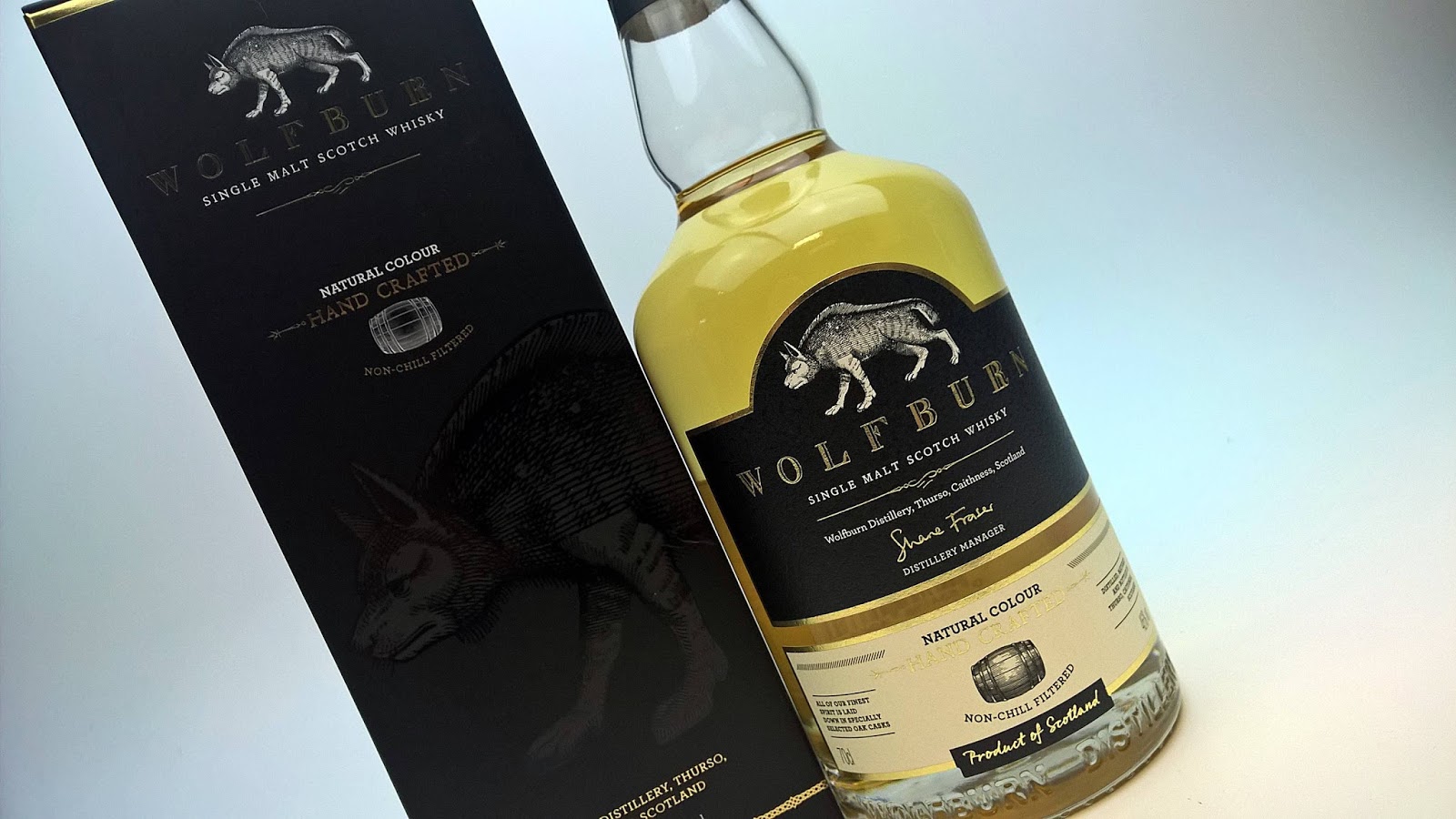 This is the release that I have here to review having purchased a sample from Sjoerd at Malt Fascination along with a couple of others that’ll be appearing online shortly. I could have obtained a bottle myself but after a few expensive months of whisky festivals and other whisky related purchases it’s time to save a few pennies. As the blurb on the right of the website says all the whiskies are mine unless otherwise stated. I don’t participate in the PR game and have no desire to do so.

This is all about my whisky journey and it has to include Wolfburn doesn’t it?

During maturation this whisky was also partially matured in ex-Islay quarter casks (Laphroaig anyone?) to bring a new dimension to what was originally conceived as a light and fragrant spirit. I’m interested overall as Thurso and the North of Scotland is such a rugged environment that a tough, distinctive dram is what I would reach for. Old Pultney has its own characteristics so I’m hopeful that Wolfburn have managed to reflect their setting within their spirit. Time to find out…

Colour: I applaud the team for bottling this at natural colour, its a very faint blonde but shows belief in their whisky.
On the nose: oh aye the first thing that reaches out is that Islay influence. Initially the faint echo of peat and the Highland wilderness. A coastal influence with sea salt and broken shells. Some decaying vegetation, black pepper oat cakes, dirty vanilla cream and honey. An element of fruit as well beneath the foliage with some grapefruit and green apples.
In the mouth: again its the Islay influence that arrives first with sea spray and coastal vegetation including a floral note. Crushed white grapes, icing sugar and vanilla pod scrapings.

I liked the nose even if it is too Islay-influenced for my liking. Given this is a debut whisky from a Highland distillery I would have preferred its own coastal influences along the lines of the Abhainn Dearg single malt whisky.

It seems like a shortcut to paper over the youthfulness of this whisky. It’s still perfectly enjoyable as it is with the palate showing its infancy more so. I’m more interested in Wolfburn whisky without the extra cask maturation. Whenever that day arrives we’ll see what the true nature of its whisky can really be. In the meantime I appreciate that revenue streams need to be opened and this is an acceptable if slightly disappointing debut.