If there is one piece of advice I could give to a fellow enthusiast or someone only beginning to discover whisky, then its always travel with a bottle of whisky that you enjoy. Coming a close second I’d suggest always travelling with empty sample vessels as unique opportunities arise sometimes out the blue.

Whilst up in Sutherland visiting family I happened to drop into the Carnegie Whisky Cellars in Dornoch. It’s a small world as this recently opened whisky shop offers a decent selection of current and past bottlings. What made it more appealing is the staff actually know their stuff and Michael was aware of the dreaded plague of the Whisky Rover. I find this somewhat unusual as I don’t proclaim anything or plaster my image left right and centre. For me its all about the whisky rather than the Tweed, beard or becoming a whisky consultant – whatever the heck that is?

I’ve seen the blogger fame having spent time in the radiant glow of Mark at Malt-Review it became a running gag amongst #thetormore4 when he’d be recognised again. The most hilarious aspect was a discussion around this on our way to Ballindalloch distillery for their superb tour. Within moments of entering the reception area another tour guest (Justine from Kask Whisky), a total stranger at this point exclaimed ‘I know you, you’re Mark from Malt-Review!’ Much to the hilarity of #thetormore4. You know what readers? He loves it as well.

Being more stealth and undercover is my preference but sometimes the cover is blown. A long discussion with Michael in the Cellar unfolded; great to meet someone so passionate about whisky and closed distilleries in general. Plans for the Whisky Cellar were discussed and being impressed I did my bit and purchased a sublime 2001 Clynelish from Gordon & MacPhail. Being observant Michael had seen me leaving the nearby Dornoch Castle Whisky Bar armed with 2 bottles of their immense 1972 Invergordon 43 year old grain whisky.

Unable to sample any whiskies due to my driving that day, I offered him a sample or two of some whiskies out of the car boot. A young forceful 7 year old Bunnahabhain sherry cask (review incoming) and the tremendously unique 1970’s Tormore original bottling. Taken aback he offered a couple of samples from his own personal whiskies that he enjoys in the comfort of his own home. You can never ask for a better recommendation then this, so returning the next day via the bar, I was rewarded with this Càrn Mòr 2000 Inchgower 12 year old and a 1995 Imperial 18 year old another incoming review.

Today we’re sitting down with this Inchgower bottled by the Càrn Mòr value range owned by Morrison & MacKay. The distillery itself was established nearby Buckie in 1871, taking much of its equipment from Tochineal distillery. Alfred Barnard visited Inchgower during its infancy, retelling a tale of local smugglers and distillers who utilised the water source (Letter burn) prior to the creation of a distillery.

Barnard offers a sizeable piece on the distillery and its origins with Tochineal, its predecessor from 1822. This transcended to the staff, with Barnard commenting that most of the workmen were middle-aged or elderly, and of a superior class only to be informed they had been with the firm all their lives and therefore worked at Tochineal.

Back then Inchgower was primarily a blending malt, being sold to England and the Colonies. Today it is owned by Diageo and still mainly produces for the blended market. Official bottlings are scarce with the Flora & Fauna 14 year old springing to mind or a 22 year old 1974 Rare Malt entry. 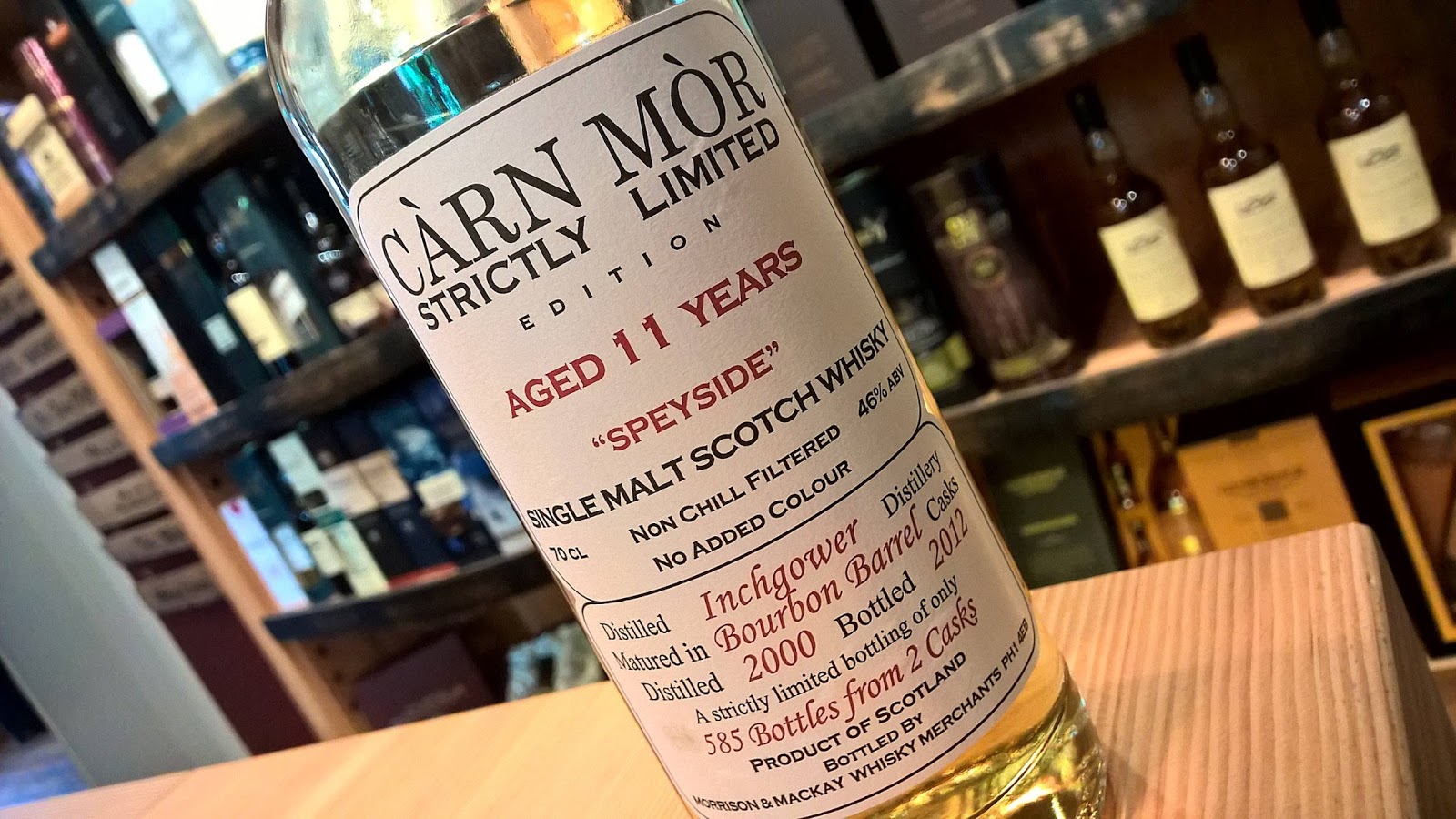 Colour: a light old fashioned lemonade
On the nose: incredibly light and floral with buttercups and highland heather notes. Cotton sheets dried outdoors, a summer walk through an apple orchard. Castor sugar, lemons and with water more cream soda.
In the mouth: the airy feeling continues onto the palate with a gentle approach. A fleeting, waif-like experience. A dusting of icing sugar, white grapes, apples, coconut, stale cheap white bread and with water more juicy pears.

An ideal starter dram or to entice someone new to whisky. A lightweight whisky but a refreshing summer’s storm that you cannot help but enjoy. It won’t shift mountains or win awards but I say bravo!

Oh aye another Imperial review I hear you mutter? I know, its turning into a wee bit of a repetitive circle as you can see..