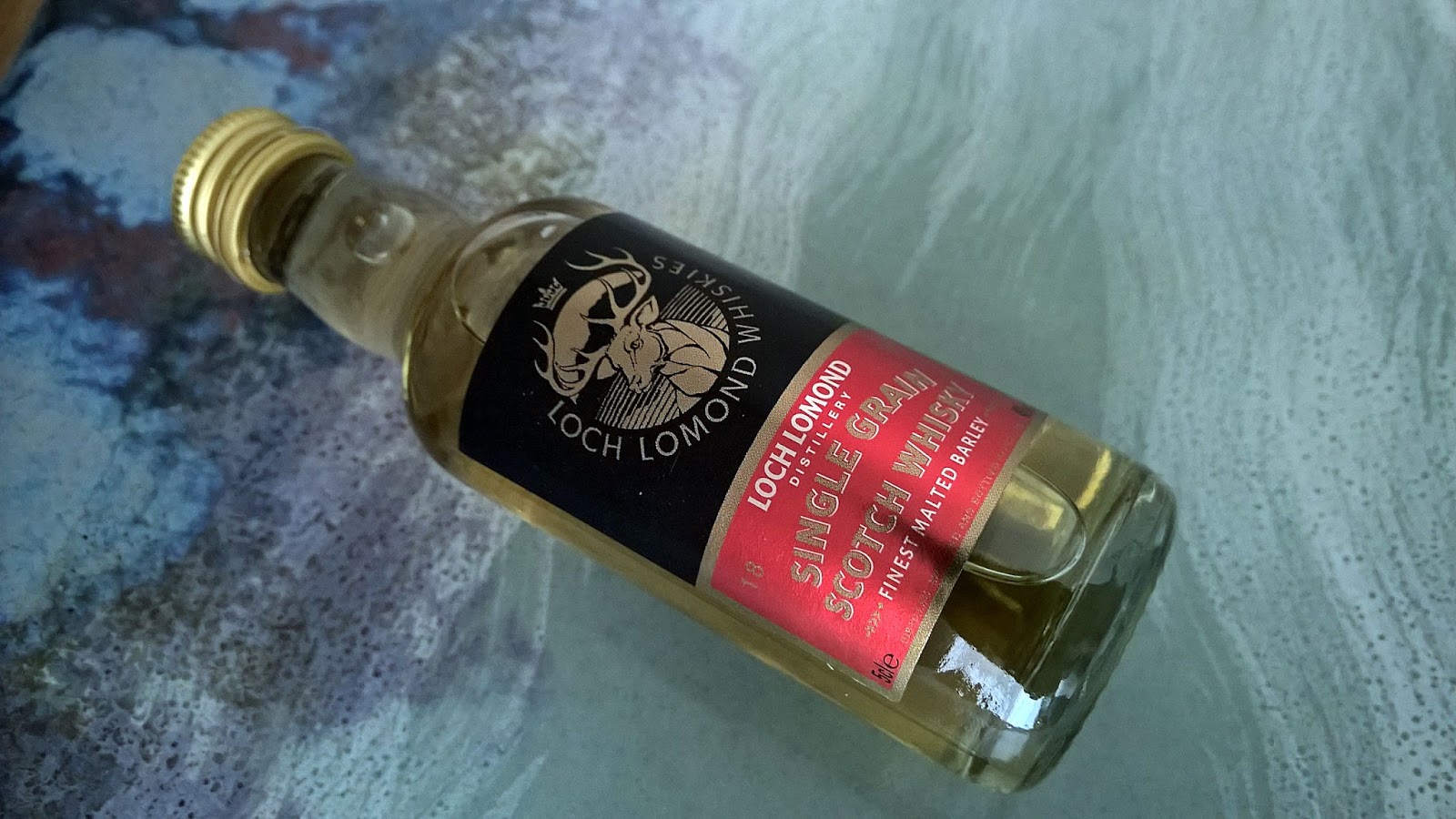 The onset of grain whisky and its popularity was knocked off track by the debut of the Haig Club. What should have been a wonderful opportunity to turn seekers into enthusiasts was wasted by an overpriced concept that failed to deliver the enjoyable characteristics grain whisky can produce. Others have tried as well with the Girvan Grain Patent Still range failing to inspire due to its pricing structure. Grain whisky arguably is a genre best handled and priced by the independent bottlers who really seem to appreciate its qualities.

I’m reviewing this new release as part of the flash blog event organised by the Whisky Wire. From the 7th September you should see several reviews online across the blogisphere so seek them out and source a widespread opinion of this whisky.

We have an official bottling from Loch Lomond of what they’ve dubbed a single grain; in other words its a grain whisky. This grain has been produced only using malted barley via their distillery coffey still. We should pause here for a moment to provide some detail about grains.

Grain whisky potentially could be made from any type of cereal. The most common components are rye, oats, maize or wheat. You could utilise one or several of these grains in whatever ratio you as the distiller prefer. Cost is a factor as well as flavour, but also other issues such as ease of use. Some grains such as rye or bere barley grown on Orkney are notoriously difficult to deal with and can place an increased burden on the distilling equipment.

The whisky can be produced in larger quantities far more quickly than the traditional pot still method you see at most Scottish distilleries. Grain by its nature is more neutral, light and ideally suited to forming the backbone of the blended Scotch whisky market. 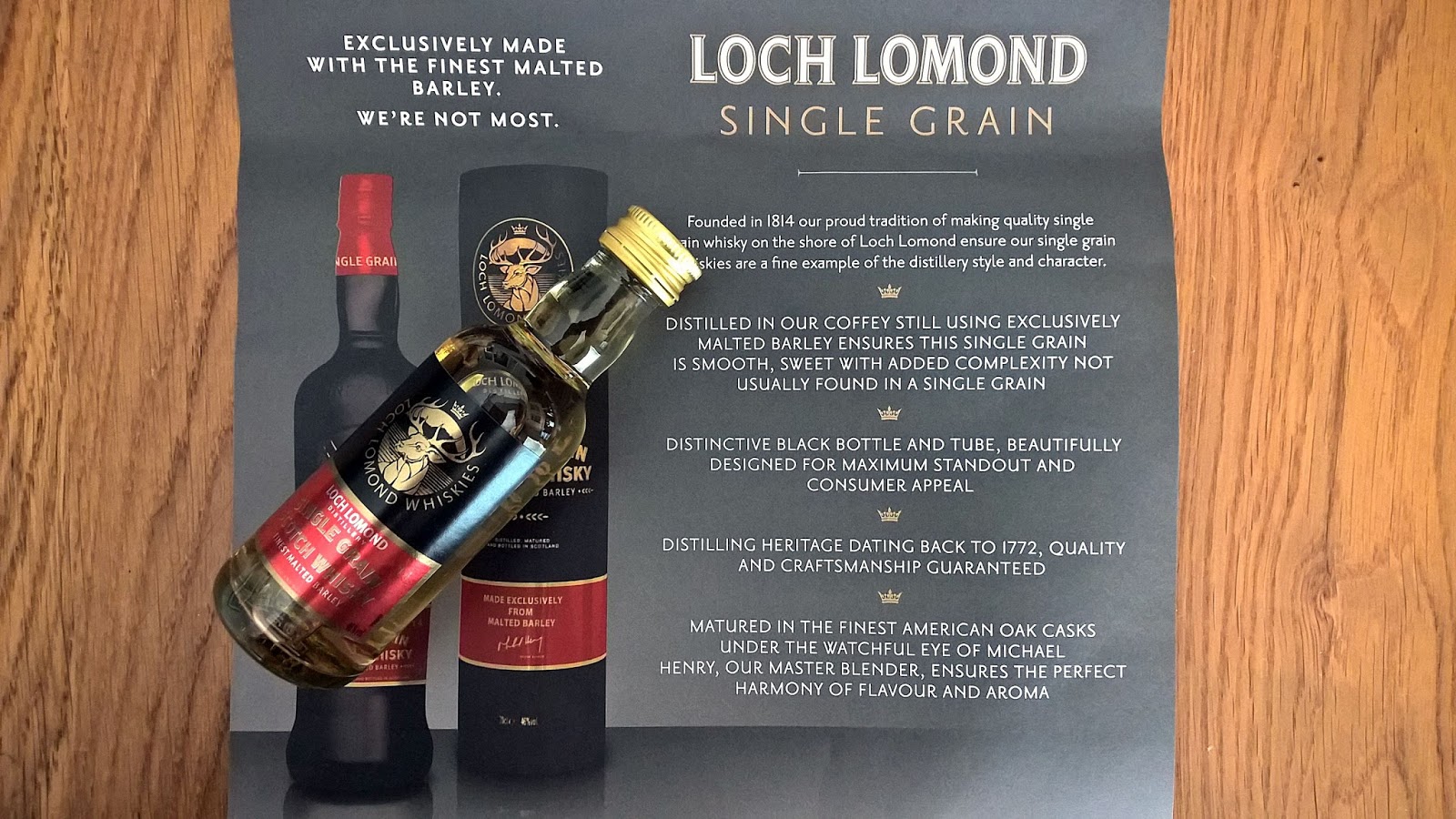 It is fair to say Loch Lomond distillery in recent times did not produce the greatest of whiskies and was in need of investment along with a long term vision. Part of criticism was the wide range of whiskies produced that did not allow the team to master principle core releases and what seemed to be no coherent plan. You may have tasted whisky from the distillery without even knowing it as it was bottled under names such as Craiglodge, Glen Douglass, Crotengea, Inchmoan and more commonly Inchmurrin or Loch Lomond. Note this isn’t a complete list of names either which highlights the problem.
A management buy-in in 2014 prompted much needed change at the distillery and Glen Scotia distillery that was included in the sale. Last year at a whisky event I tasted a couple of the new Loch Lomond rebranded whiskies and was impressed overall. I can recall how positive and optimistic the staff member was about the change in ownership and how knowledgeable they were regarding the whiskies on offer.
This whisky has no age statement or comments around colouring or chill filtration; with a young grain I can accept the need for colour to some degree. This single grain is bottled at 46% so that’s a positive aspect. I have debated whether a grain whisky would actually warrant excessive filtration with the natural oils and compounds produced in a Coffey still – would these even exist to the same degree? Enough of my ramblings, time for the review.

Colour: tanned hide
Nose: immediately its hazelnuts and crushed digestive biscuits. A vanilla nougat bar that leads me back to the nutty aspect. Icing sugar and meringues follow. Water brings out a spent matchstick box aspect which will be the char from the casks. Not hugely detailed which you’d expect from a grain whisky but perfectly pleasant.
Taste: a nicely leisurely texture and the higher strength is beneficial. Water is required and brings out grapefruit, ginger and flaked almonds. Throughout I’m pick up a floral summer meadow feeling; perhaps assisted by the very clean feel of the whisky.

Overall: an easy sipper which comes with the grain territory and a solid example. I just find myself leaning towards grains with that extra dimension such as the Signatory 1998 Ayrshire Grain that just offers a bit more.