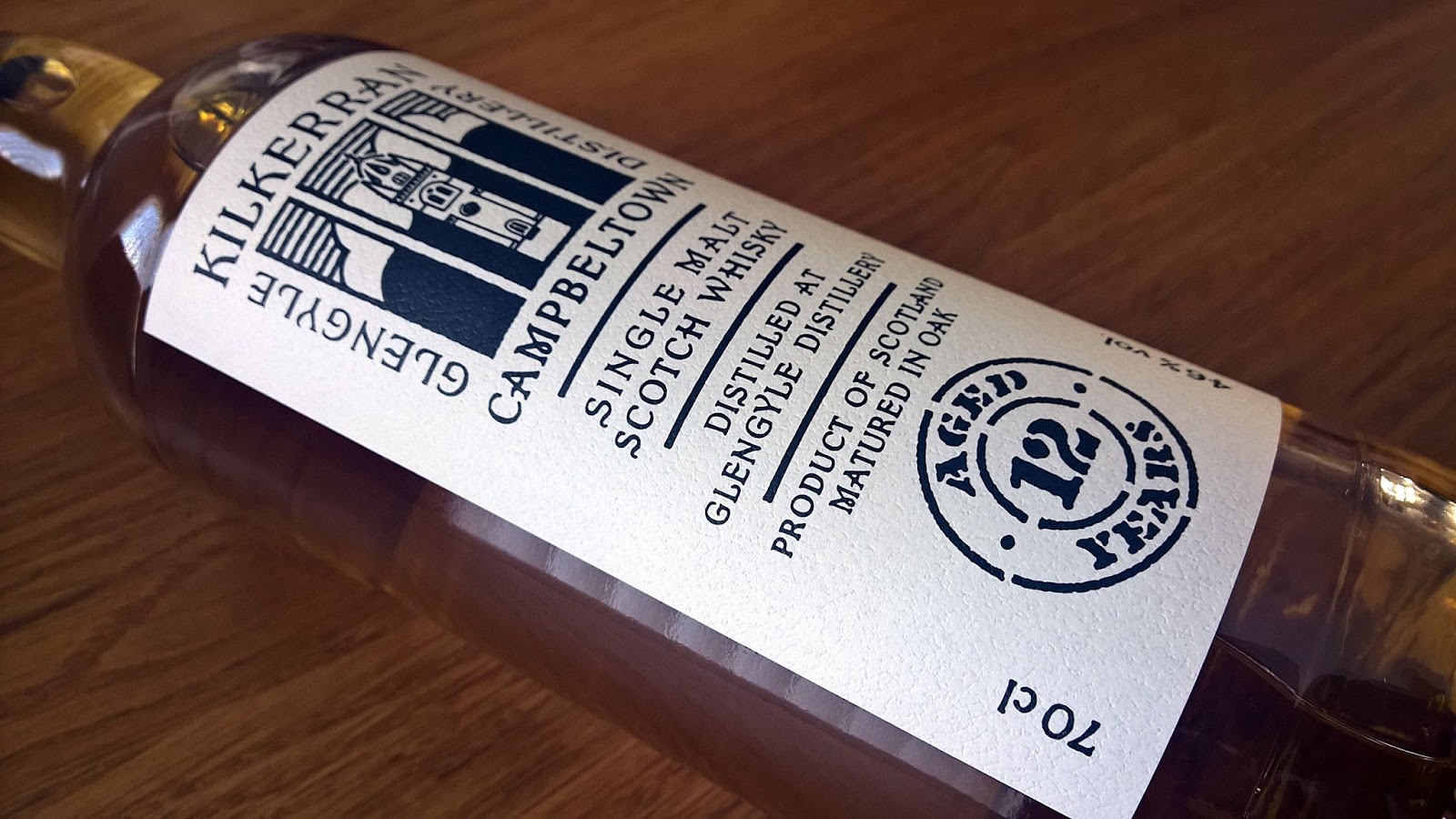 Finally we’re at that moment when the Kilkerran 12 year old is sitting in front of you, waiting to be opened. When the Glenglyne distillery was revived from its 75 year period of slumber, the summit was this definitive 12 year old release.

Campbeltown deserves to be a whisky region of its own and has echoes of distilling history it seems on almost every street. Such was its powerbase for production in a glorious bygone era. I touched upon the Glenglye distillery history during my review of the Work in Progress 7 Sherry Wood before being blown away by the WIP7 Bourbon wood release, which was my whisky of 2015. Full of flavour and character, it was priced very modestly in a period when some distilleries (or owners?) view enthusiasts as cattle and try to milk every last drop of revenue from their limited budgets.

It’s a true revival of a lost distillery unlike say Wolfburn who adopted the name of a former producer and set about building their facility as near as possible to the original site. Kilkerran has risen from the ashes with the ambition of producing a characterful whisky for the modern age with an old style flavour profile. We’ve been able to follow the develop of the whisky via the Work in Progress series that has teased us annually until now.

We’re sitting on the eve of an onslaught of new distilleries producing their first whisky. Some will bottle as soon as its able to be labelled as such, whilst others such as Ballindalloch or Daftmill have taken the it’ll be ready when its ready stance. I can appreciate why many will bottle after 3 years and I don’t blame them at all as that’s the age we live in. Not everyone has the financial safeguard necessary to take the long term approach. However when I do sit down with a debut whisky I want to experience a distillery profile and not something bottled to please the market such as the Wolfburn single malt whisky.

In essence Kilkerran has taken a very resourceful and practical approach to reach this 12 year old milestone. We’ve been able to taste their whisky annually in the full knowledge that in their opinion it doesn’t really matter until that 12 hits the shelf. Those that have followed the WIP journey will tell you that Kilkerran could have bottled their debut whisky years ago and more than satisfied enthusiasts with the end result. That’s the advantage of calling upon a wealth of knowledge from Springbank distillery (down the road) including Frank McHardy. I just hope that other distilleries in their formative years take note of the WIP method and consider it whilst waiting for their spirit to mature. 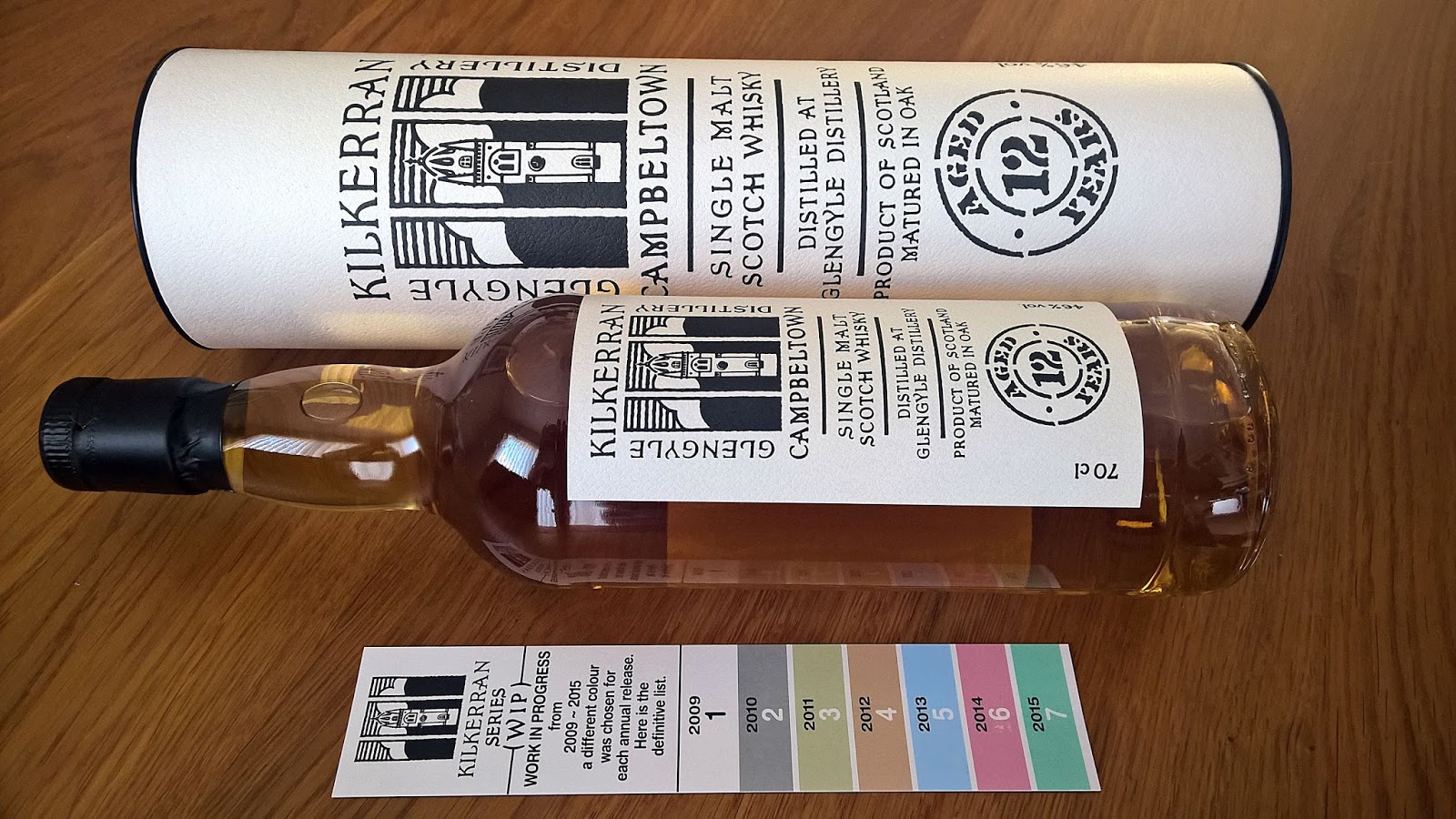 Moving on the packaging of this release is simple and effective continuing the WIP theme. Here we’re not paying for marketing, fancy design or flannel as this is a streamlined release. It says exactly what you need to know on the tin. We have to be thankful as well for the pricing strategy as this bottling will set you back just £35 or thereabouts. I can safely predict that this will be the cheapest initial whisky from any distillery we’ll see in the coming years. Kilkerran could have charged double the price and it still would have sold extremely well; what a refreshing approach.

This release is bottled at 46% with no chill filtering and is natural coloured – the way nature intended. It’s a mix of 70% bourbon and 30% sherry casks in the recipe. Enough talk, lets get down to the main review…

Colour: dried reeds
Nose: it’s the delicate smoke that greets you or should I say hickory wood that I use on the BBQ for that one day of Scottish summer. The unmistakable aroma of lemon drizzle cake with plenty of icing and may I add a twist of orange peel. There’s some honey and vanilla of course but its not as amplified as you experience in other distillery releases; there’s far more going on here. Such as sherbet, cranberries and a helping of salty brine.
Taste: its the texture that’s enjoyable initially light it moves into more a weighty oily tome with ease. Lots of black pepper and those sharp lemons. It’s very distinctive. The sea salt is very pronounced as if its from the Isle of Skye, which in my experience of salt is a real blockbuster. Then the passing of peat and dirty vanilla. A real concoction with sugary shortbread and then a hint of bitterness from the wood. The salty finish just goes on and on…

Overall: hugely enjoyable and priced to bring shame upon other distilleries. There’s little here to criticise. Personally I do prefer the WIP7 Bourbon Wood but that’s on rations for the foreseeable future as I’m down to my last box. The Kilkerran 12 gives you so much for so little outlay its a marvellous thing indeed. A new chapter has begun.

It’s about time I tackled Glengyle distillery and what they’ve been doing via the Kilkerran range as they work their way up through the years..