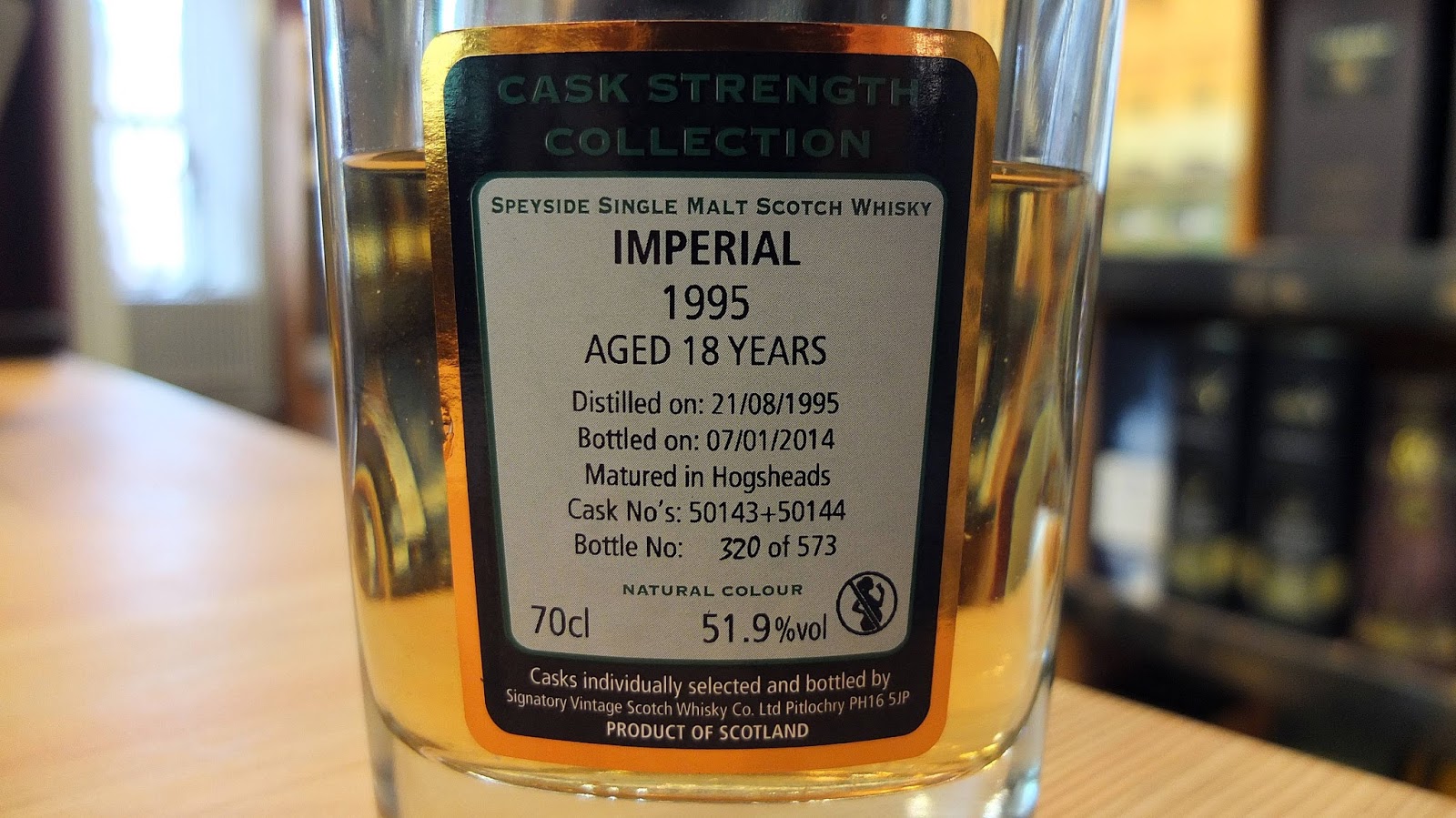 Oh aye another Imperial review I hear you mutter? I know, its turning into a wee bit of a repetitive circle as you can see here. My common descriptive for Imperial distillery (god rest its soul) is that I’ve never had a bad one yet.

It does fill me with sadness that it is no more. However as far as closed/lost distilleries go its still one of the most affordable and miles better than filth like Pittyvaich that deserved to die. Rather than run through the distillery history and its possible reasons for closure can I instead direct you to my review of the Robert Graham 1998 Imperial 17 year old which has all the gen.

Instead now I’ll set the scene in my whisky den. Sebadoh and their sadness fills the air, the house is empty apart from the clatter of this keyboard. Everything is calm and still. A perfect setting to explore a sadly departed distillery that really wasn’t given much of a chance – you’ll know if you have clicked that aforementioned Robert Graham link!

This sample was kindly given to me by Michael at the Carnegie Whisky Cellars in Dornoch. It’s a new whisky retailer within the atmospheric confines of Dornoch with the legendary Dornoch Castle whisky bar nearby. It’s perfect for me because I can purchase bottles and then go drink whisky I cannot afford to purchase as a 70cl. I talked about how an impromptu exchange of samples led to this Imperial and a Càrn Mòr 2000 Inchgower 11 year old amidst its review.

I’m always interested in whisky recommendations whether its a fond memory for the person involved or a special event or just an overlooked quality dram. Word of mouth is the best method that marketers can only dream of harnessing. Unfortunately most pieces of feedback I hear about on the whisky jungle drums nowadays are whiskies to avoid.

there is history in this place, there are dragons to be chased, and although I don’t know who you are, an easy flow and a strong heart, and the charm in the way you hide, gently take my skull for a ride

With those words the Sebadoh album comes to an end setting the mood perfectly as we chase down this whisky ghost.. 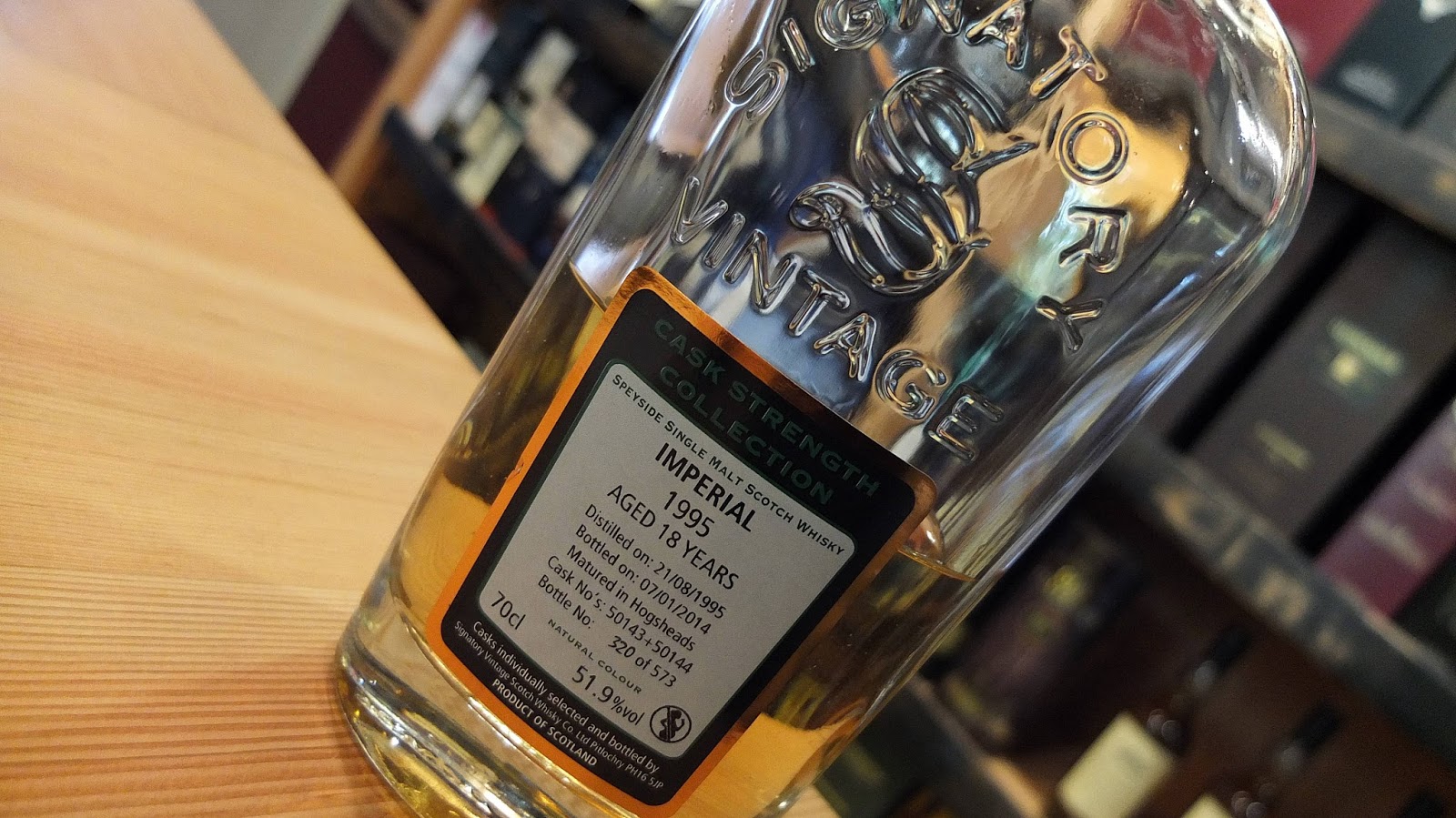 Distilled on 21st August 1995, this whisky was laid down during the twilight years of Imperial which finally shut down its stills for good in 1998. Bottled by the excellent Signatory at an attractive 18 years of age on 7th January 2014. It’s a vatting of 2 casks (50143 and 50144), brothers in arms if you will at 51.9% strength. Through experience I’m coming around that the vatting of at least 2 casks produces a more definitive distillery experience and helps iron any flaws in a bad cask. For instance the Cadenhead small batch series with particular relevance to its Littlemill whiskies in recent times springs to mind. They’ve been generally excellent verging on superb and utilise a similar method to that harnessed by Signatory.

Overall: what did I say again? I’ve never had a bad Imperial? Yes that’s it and for now that remains true. 100% hit rate and level of satisfaction. Only Tormore can claim such a feat alongside the great one.

It’s an unfortunate sign of the times that the remnants of closed, lost or silent distilleries exist nowadays in bottle form only. There is something..