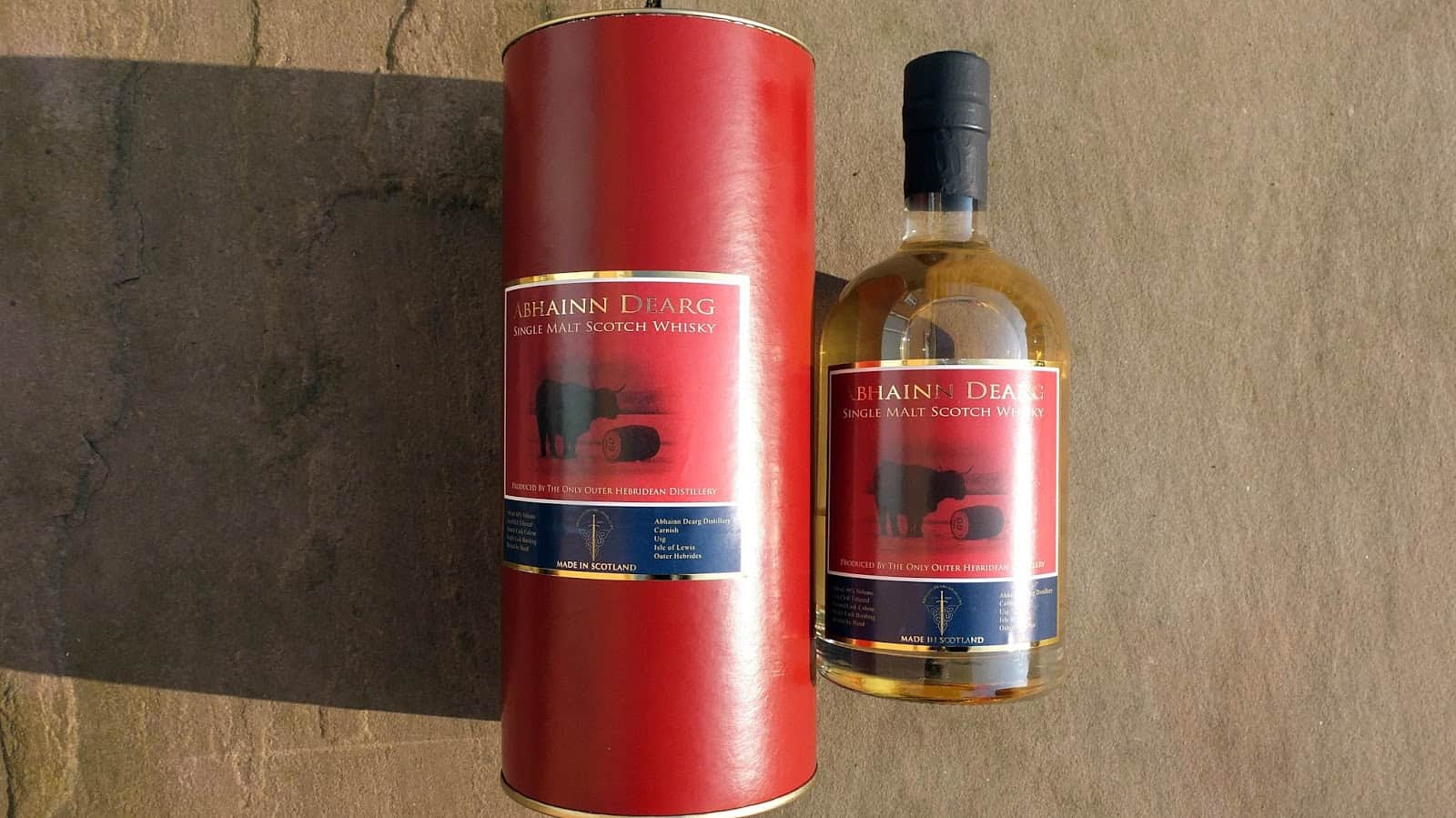 It has to be said that they’re doing something a bit different at Abhainn Dearg distillery. Abhainn Dearg, which is pronounced Aveen Jarræk, stands for “red river” in Gaelic. It is located in Uig, on the western coast of the Isle of Lewis. That makes it the most westerly distillery in Scotland, and when it was built in 2008, it became the first legal distillery in the Outer Hebrides for the better part of two centuries.

Now that gentle preamble is out of the way, here’s a photo of their weird-as-hell stills, which was taken by fellow whisky writer Whisky Rover, during his distillery tour. 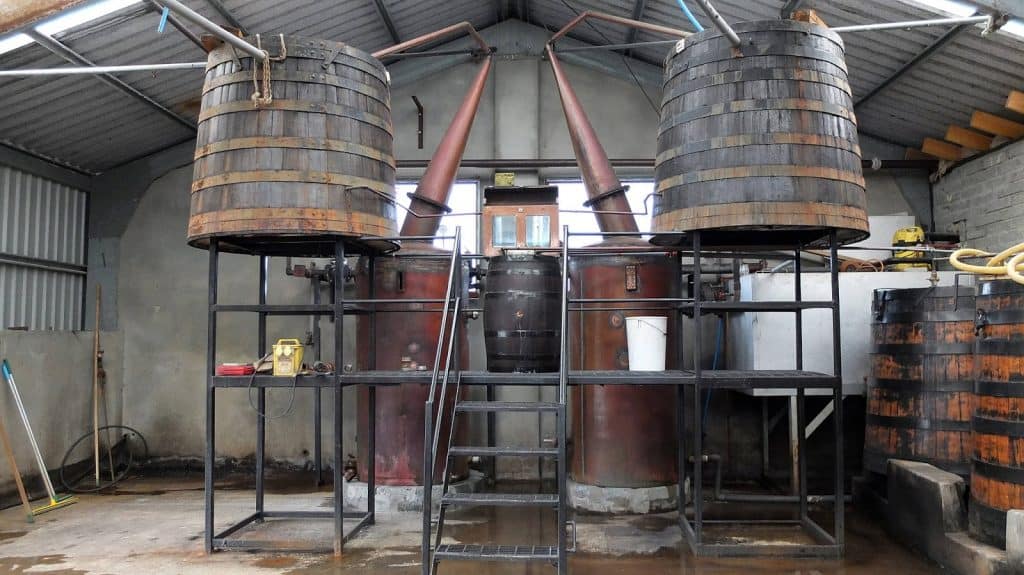 As you can see, this place is not like many other distilleries. Not in the slightest. The stills were designed and built by Marko Tayburn, distillery owner, himself. They’re based on the design of an old illicit still, the kind used by rogues back in the day. Combined with that is the fermentation time – a little talked-about, but huge influence on whisky – which is a lengthy four days. They are doing things rather differently.

The aim of the distillery was to make a whisky that was made from field to bottle, solely in the Outer Hebrides. They’ve only been making whisky for a short while and that means there’s not a huge amount available so today’s whisky, the Abhainn Dearg Single Malt Scotch Whisky, is rather limited. Made in 2011, it was bottled at 46% ABV and costs around £150 a bottle. 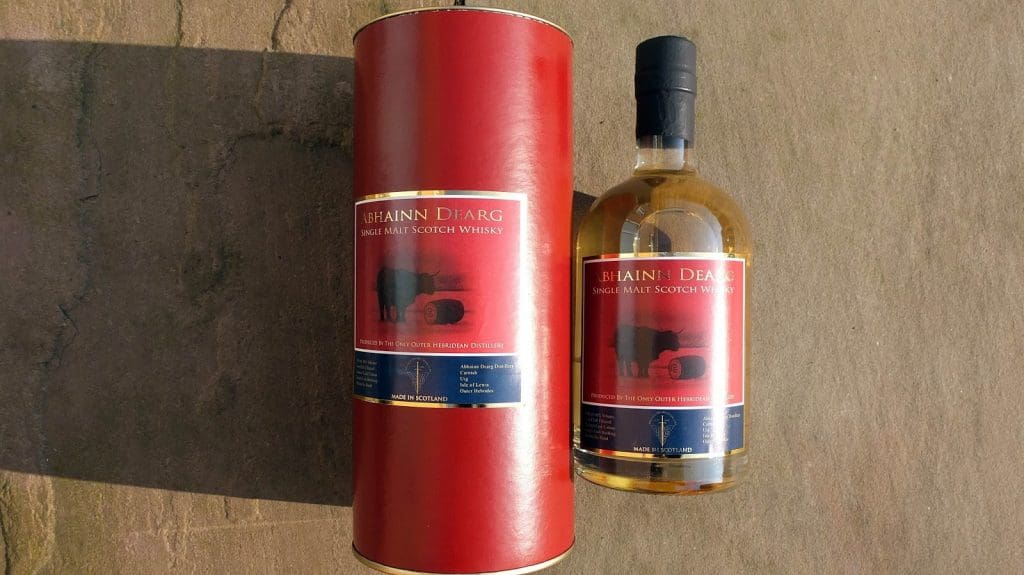 On the nose: well that’s a bit different. Huge lime cordial introduction, followed by a quite raw straw, nutty character. Very malty. Vegetative. Needs time to calm down a bit. Then green apples, pear juice. Grape juice. Grassy and vegetative once again towards the end.

In the mouth: still mad! A weird fizzy mix of grapefruit, ash, malt and brine. Straw. A little bit sulphury, brackish, and vegetative again. Grassy. Weird notes of onions? And I don’t think I’ve had that in a whisky. Faint notes of vanilla, then lemon and brine once again, with quite a short finish.

No idea what to make of this one. There is a leery extremeness to the Abhainn Dearg single malt. It’s an insane dram, the whisky equivalent of Zed from Police Academy.

It’s weird – not in an utterly disgusting Fujikai kind of way, but I suppose rather weirdly interesting. I waved a glass in front of my wife, who said, “It doesn’t smell like something you’d want to drink.” But then again, she doesn’t like whisky anyway. Clearly, they are doing something very different here and that absolutely shows in the final spirit – some people may like that, some people won’t. I doubt very much you’d see a polished whisky ambassador pouring glasses of this at a festival and, in a way, the whisky world is all the better for its presence. Having character is nothing to be ashamed about – with whisky as with people.

I will be very interested to taste single malt from this distillery after a good time of maturation, to see if the Best of Uig can be tamed.

It’s always exciting to try a single malt whisky from a new distillery for the first time. Given the recent boom it is in danger..

As annoying as flight delays are, one shouldn’t let it sour a good holiday. Sitting here in the sparse yet functional Stornoway airport departure lounge,..