Remember the days of value whiskies? Where you weren’t being fleeced for packaging or some bizarre cask finish or no age statement bottling? Vaguely perhaps or just the stuff of legend?

Fact is good value whiskies are still out there but do require some effort to locate and appreciate. In 2016 we’ve had the excellent 8 year old heavily peated Bunnahabhain for instance that for around £30 just hit the right notes. Many independent bottlers offer a value range of whiskies within their portfolio of brands such as the MacPhail Collection, Douglas Laing’s Provenance or in this case the Càrn Mòr label from Morrison & Mackay.

Recently I reviewed a Càrn Mòr release in the form of an 11 year old Inchgower and was pleasantly surprised. Hence my purchase of this 6 year old whisky from Knockdhu distillery otherwise known as anCnoc set in the Highlands region of Scotland. Part of the appeal other than a reasonable price of £38 or thereabouts, was you don’t see too many independent bottlings from Knockdhu hence my purchase.

Take a look at the packaging (there isn’t any) and all the information is conveniently displayed on the label; not hidden away amidst marketing camouflage. Great isn’t it? Ticks all the boxes and makes Cadenhead’s packaging and design look lavish.

Knockdhu distillery was founded in 1893 but it wasn’t until 1990 that it released its first official whisky, before being rebranded anCnoc shortly afterwards. Since then the current owners (Inver House Distillers) have released a series of expressions building a new brand in essence to reasonable success.  Inver House spotted an opportunity to revive the distillery in 1988, which had been closed since the culls of the early 1980’s. The name switch avoids confusion with another distillery such as Knockando, with the transition making sense as Knockdhu (Black Hill) becoming anCnoc (the hill). The team value the distinctive nature of the spirit maintaining the two stills that also feature worm tubs. 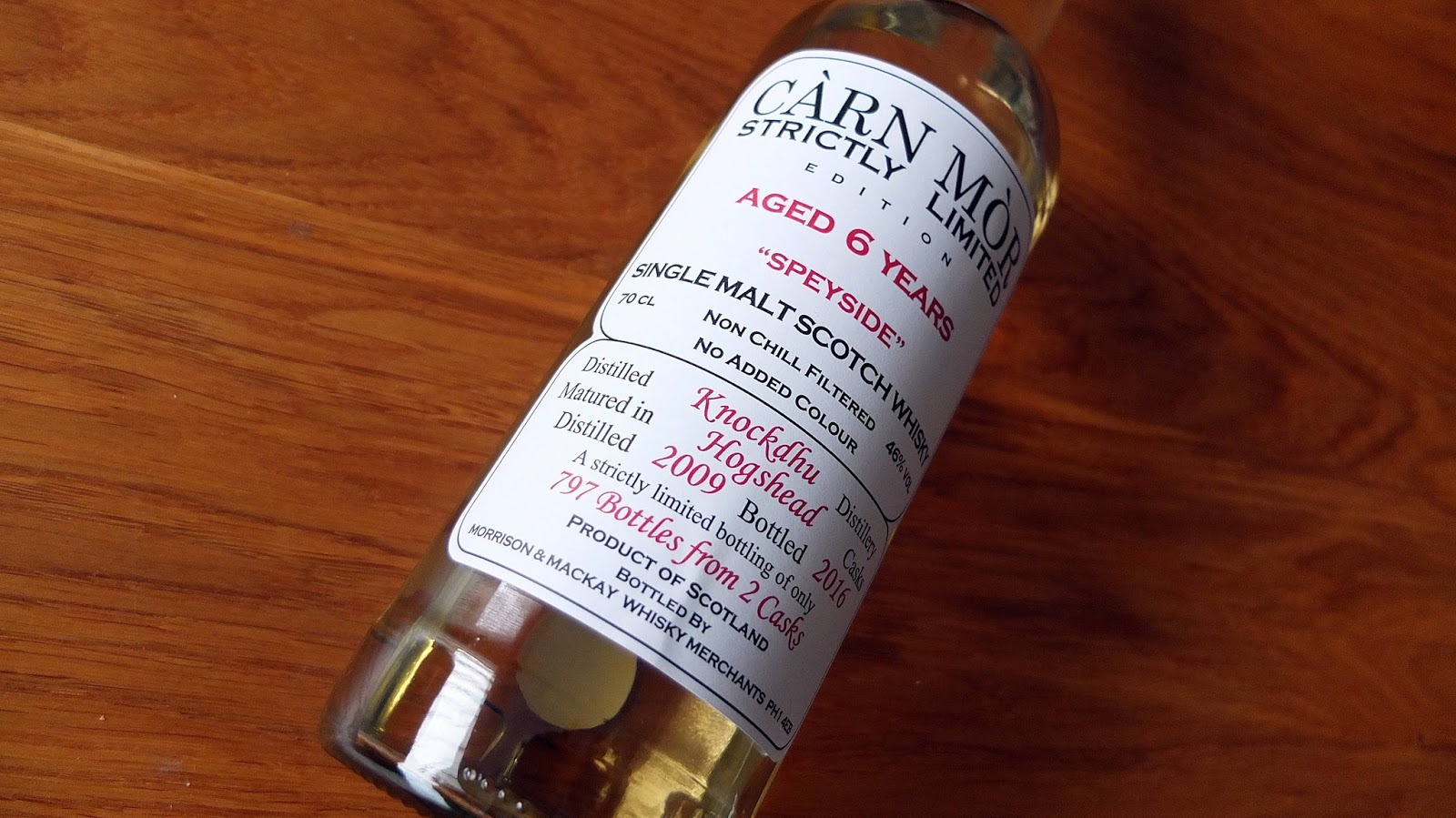 Bottled at 6 years of age might seem young but when I was on Islay recently I tasted a dram not old enough to be legally called whisky straight from a bourbon cask, which blew away several whiskies I tasted that day. My thoughts are its ready when its ready and forget about the age as its just a number. It’s also a vatting of 2 casks that I presume are both hogsheads? I’ve heard theories that the approach to vatting can given you the best features of a distillery while slowly reducing the elements you don’t want displayed. It’s something Cadenheads have done with their excellent Small Batch range in recent times.

This Knockdhu is bottled at the ideal 46% strength, is devoid of added colour and does not warrant chill filtration. That ladies and gentlemen is pretty much the Holy Trinity of whisky right there. All we are missing is the label saying Tormore. A decent figure of 797 bottles were struck from the casks and its interesting the label saying Speyside, as Knockdhu is widely seen as a Highland distillery. Time for the whisky itself…

Colour: vanilla glaze
On the nose: punchy vanilla as expected, then toffee not make that salted caramel upon reflection. Its the presence of wine gums and pineapple that draws you in. Lemon meringue pie for sure, melted vanilla marshmallows and creamy fudge. In the background an almost slight peaty influence acting as seasoning and a hint of perfume.
In the mouth: gloriously sweet and sticky texture. A little aniseed on the finish with fennel. Lets back up to the start again. Round 2. Blood oranges moving into grapefruit. Just a touch of water is beneficial bringing out more vanilla

I’m glad I took a punt on this purely because you see very little Knockdhu amongst the independents. At 6 years old it already possesses character and poise. It’ll be one to share with friends until we reach the bottom together.