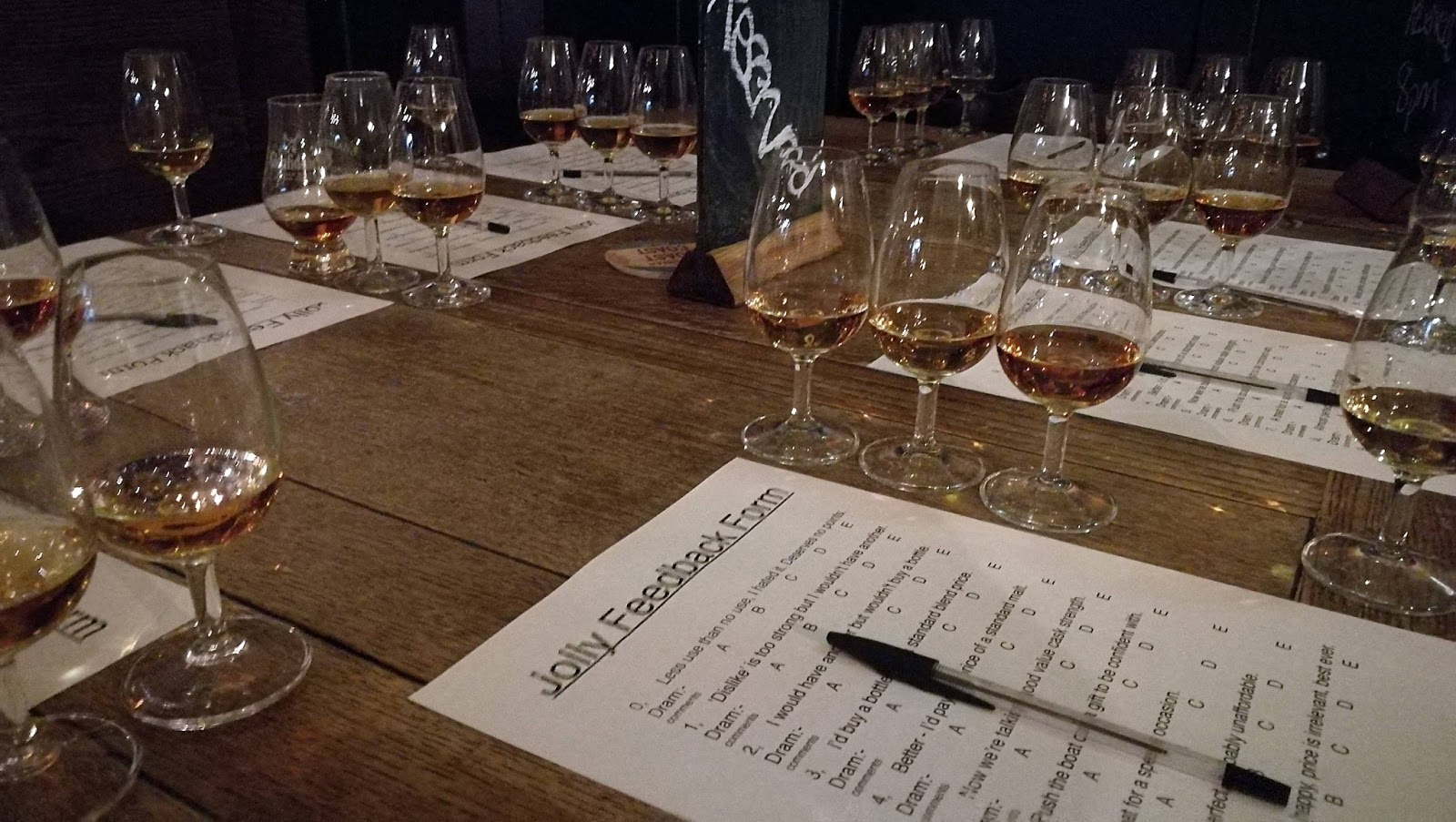 A dreich evening in Edinburgh heralded the return to a Jolly Toper tasting. I’ve been especially poor attending this year for a variety of reasons that just seemed to mount as time passed. Determined to experience Edinburgh’s leading whisky tasting exponent and a few familiar faces in the process, I wandered down to the Kilderkin on Edinburgh’s Royal Mile. Avoiding the enticing whisky shops on route and the option to just jump on a train and depart to the warmly comfort of home.
Held every 2-3 weeks, Mark as the Jolly Toper ensures a variety of pours that form his whisky tasting evening. A typical Edinburgh pub plays host to the event with a side room being cordoned off for enthusiasts. The Kilderkin itself offers a fine selection of drinks and an imaginative pizza menu with all sorts of unusual toppings. For whatever reason this evening we were taking over the front of house in the Kilderkin. 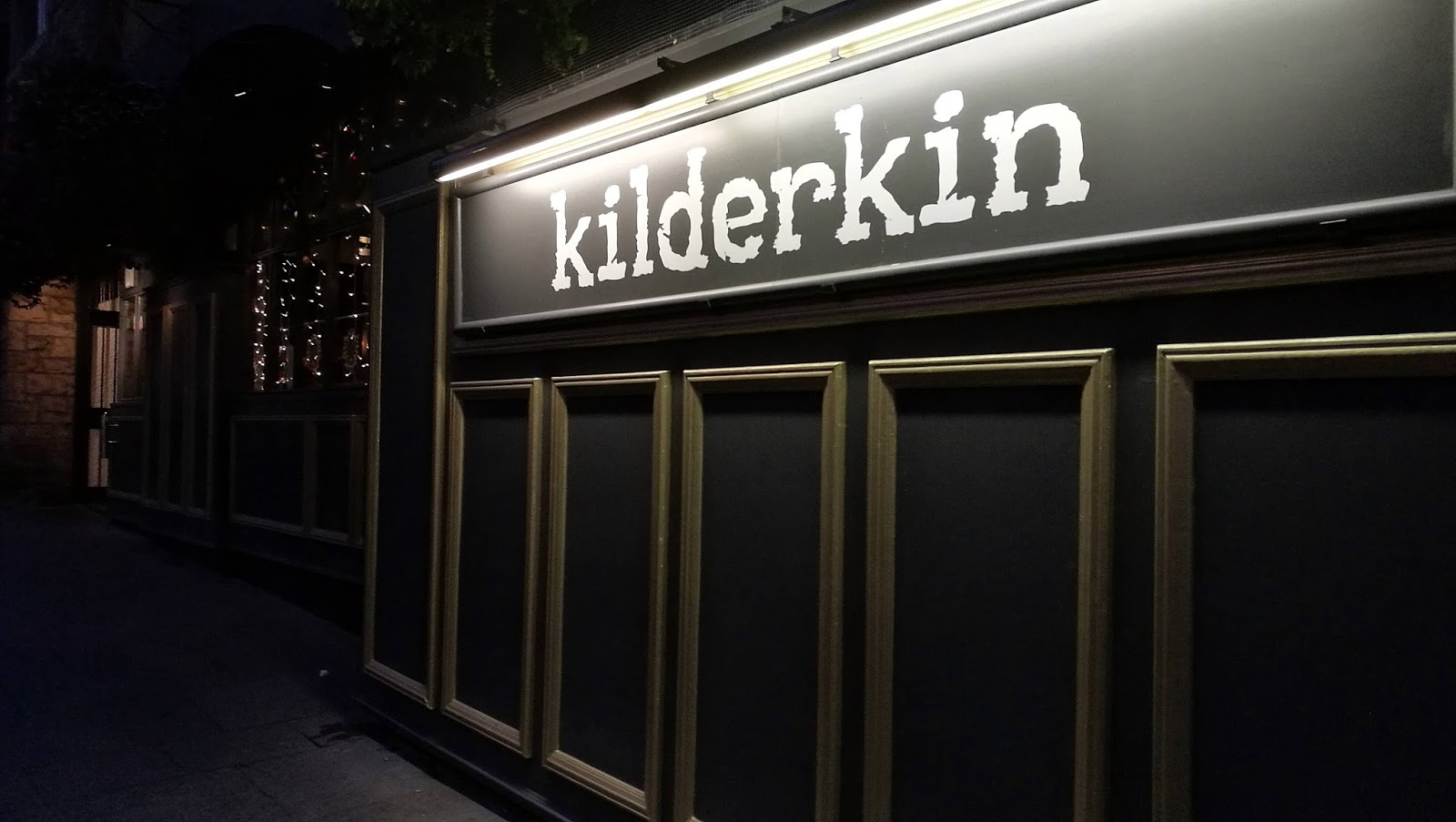 Each event is based around the principle of POURS (Peaty, Old, Unusual, Rare and Sherry) cask matured whiskies. On the odd occasion Mark will put together a very special event such as a tasting of closed distilleries or the Lochside extravaganza that I missed due to a Fleetwood Mac concert. I still haven’t forgotten that clash of the titans! He’s even taken to the waves on barges and a put together a well-received Edinburgh walking tour.
Ticket prices for each evening vary on what’s being poured. For instance this evening didn’t have a particular theme but 5 drams that should accommodate a wide variety of tastes. The price for the 5 drams below was just £23 which given some Edinburgh pub prices is frankly a bargain. As always these evenings are more than just the whisky, which is the initial framework that unites attendees. Over the years I’ve met new friends, worldly characters and plenty of tourists with a passion or interest regarding whisky. They’ve always enjoyed the experience and immersing themselves into the banter of an evening as thought provoking comments are traded across the floor.
Mark just doesn’t pour and give his thoughts; you’ll be given some background on the bottling or distillery and then asked what you think and what you’d pay for a bottle. It can lead to some surprising results and shows the wide range of palates and ultimately that your opinion is just as valid as someone else’s. Without further ado, here are my tasting notes from the evening thanks to scribbling down my impressions mid-event and taking a couple of samples home for further pondering. I did put up a couple of streams via Periscope live on the night just to give those followers across the world a flavour of the atmosphere and vibe of a tasting which you can see here. I may do this again at a future event so its worth seeking me out on Twitter initially. 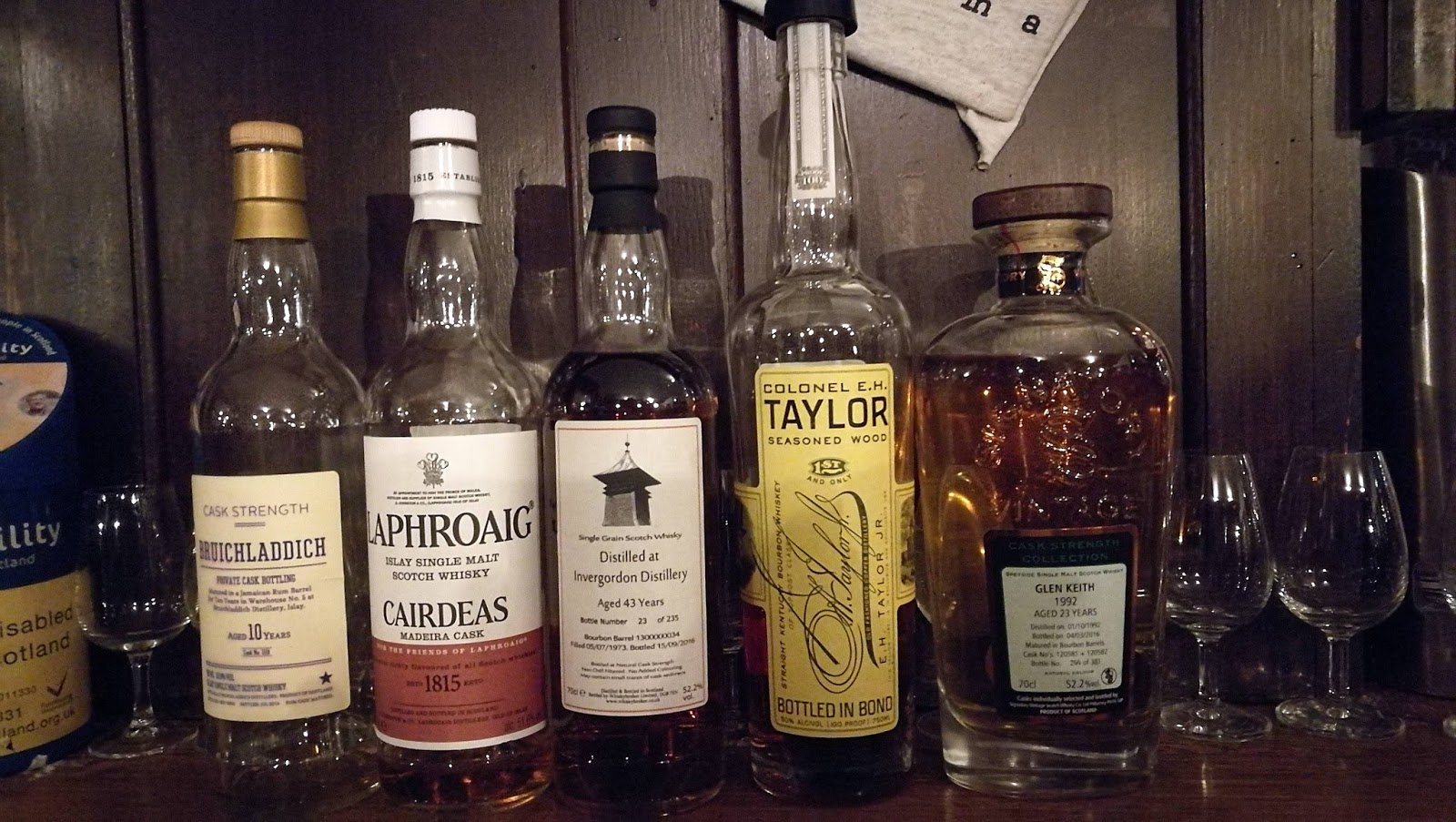 Colour: a light wine
Nose: peaches and icing sugar with wine gums and a little marzipan. Memories of pine cones, vanilla and marshmallows. Time in the glass revealed honey glazed ham.
Taste: at its core are vanilla and honey so much so its difficult to break through the barricades. It’s certainly summery and creamy with crackers evident.

Overall: solid would be my summary and not worth the £87 or thereabouts. However what was interesting was that 2 members of our table had tasted this previously and raved about the whisky. Yet tonight faced with the same liquid they were disappointed.

Colour: melted toffee
Nose: hints of treacle and toffee with a little rum in the mix. A noticeable dusty aspect with vanilla, sweetcorn and syrup. Plasticine with cotton, a little bacon fat and buttery ginger.
Taste: a large dependence on vanilla once again. A twist of black pepper and suggestion of cola cubes. Very woody with a hemp-like finish.

Overall: felt this one lacked the elegance of the 43 year old Invergordon bottled for the Dornoch Whisky Bar but it is much cheaper. A little rougher around the edges as well; was expecting more.

Colour: butterscotch
Nose: full on vanilla with a bronzed rubbing quality. Paint stripper? A leather strap across the face with some strawberries and cranberries. With water I felt a little rose came through.
Taste: rough like a badger’s arse goes the saying. Nothing refined here this is a dram for that moment after a hard day out grafting. A mouth full of eraser, sandpaper with some cardboard thrown in for good measure.

Overall: America you can keep this one. Surprisingly did go down well with some on the floor but I note some attendees were also drinking beer at the time. I actually vatted this with some of the above Invergordon and it improved things dramatically! The vanilla still won out though.

Colour: caramel
Nose: floral and yet full of herbs. Blue vein cheese was our initial summary. A real salty aspect as well. Lots going on in fact, wish I had some more. French mustard and raspberries – what a ride.
Taste: great texture and a salty bacon with Hovis biscuits, Japanese rice crackers and more cheese. Gorgonzola of all things definitely one to pair with cheese pssst! With water more honeycomb sweetness, aged bananas and feta cheese pops up plus a bit of cola. Great legs as well.

Overall: don’t go out looking for this as its a private cask and not available in normal whisky circles. Shame really as I find Bruichladdich on recent form vastly overrated and warranting a real kick up the ass. Part of this belief comes from the series of very average private casks flooding the market. Whether its the quality of the spirit or tired casks I’ve been let down so many times. Finally though here was a winner thanks to full term maturation in a rum cask.

Colour: apricot
Nose: its like someone has spilled Laphroaig over a really old and dusty fabric sofa. Talcum powder thrown across a fir tree and fudge. A real earthiness quality which will be that old tartan fabric sofa from the 60’s I’m visualising.
Taste: a little marmalade and walnuts. Throughout a milky coffee with chocolate and red currant jelly. Shallow and without the cask finish rather naked, instead we have this botched effort.

Overall: I’ve tasted this one previously and it’s the worst of the Feis Ile 2016 releases and I’ve tried a few let me tell you. The cynic in me believes that faced with a sudden need for this bottling Laphroaig quickly put together this offering finishing decent whisky in madeira casks. What’s the saying again? If you’ve got nothing worthwhile to say then just shut up? This is the whisky equivalent.

So there you have it. Five drams and a great deal of laughter and entertainment later, we’ve reached the end of this latest Jolly Toper tasting. Drop by the site and see what’s on the agenda, even now the early November tasting is starting to take shape and the pre-Christmas bash is always worth attending.

The Jolly Toper whisky tastings are a regular Edinburgh event and a must experience for any visitor to the capital. Having attended these on an..

Whenever I’m asked about whisky I always encourage others to keep on looking and trying to find the whisky that agrees with them. It’s not..