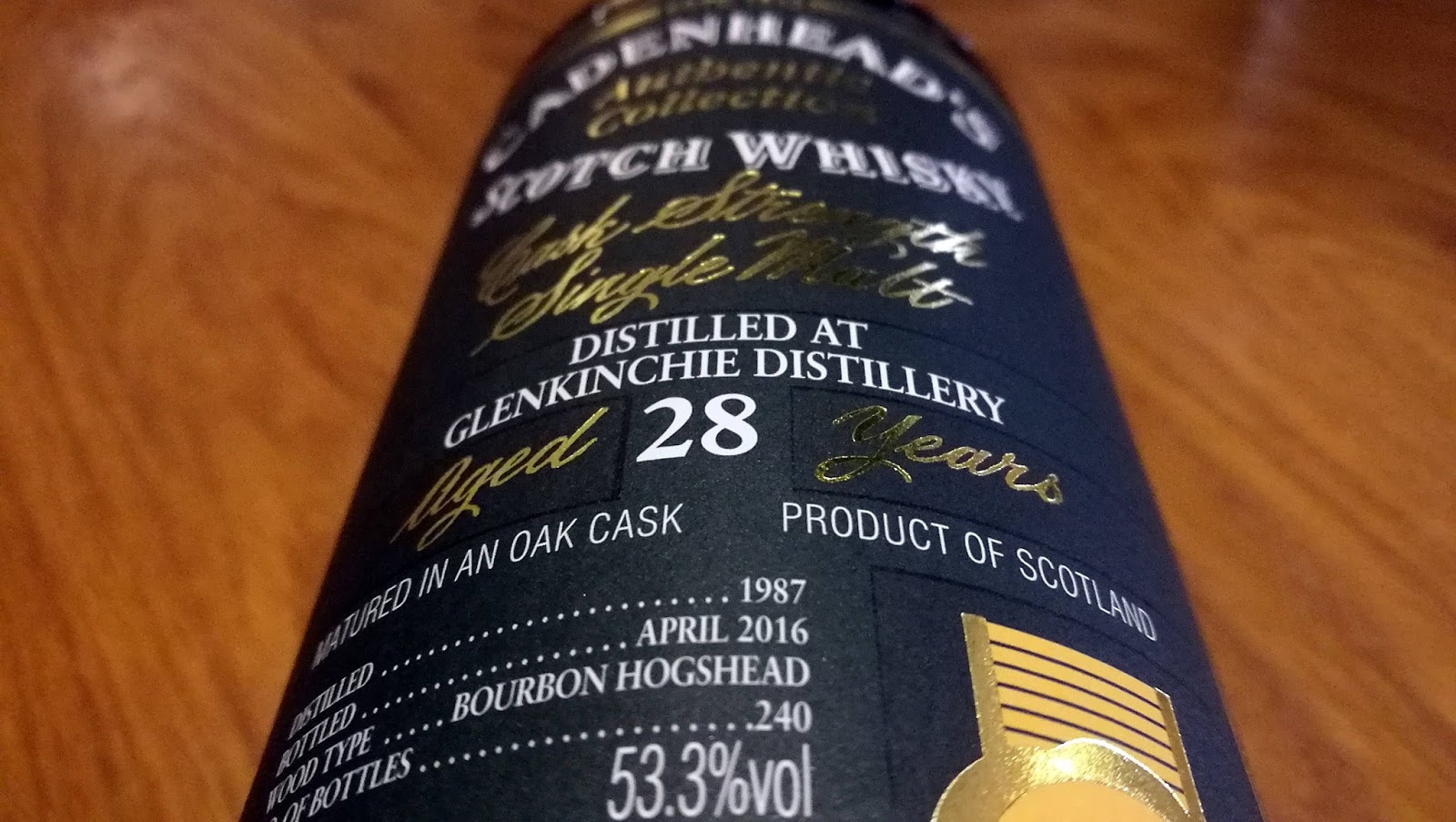 Oh my, here’s a special event in the form of a Glenkinchie bottled by Cadenheads. One of the most rarely seen distilleries outwith the official bottlings, the last time I can recall seeing another cask released outside of Diageo was a couple of years ago. Funnily enough, Cadenheads were also responsible for that release and the whisky was full of character.

Say Glenkinchie to me nowadays and I immediately thing of a quaint distillery and a series of disappointing whiskies. Often referred to the breakfast malt, it’s light and an ideal starter dram if you’re new to whisky. A huge percentage of its annual production goes into blends – I’m sure the tour guide suggested it was as high as 98% when I visited Glenkinchie. This leaves very few casks destined for the single malt market and even less amongst independent bottlers.

Cadenheads are one of the premier independent bottlers and have an incredible treasure trove of casks in Campbeltown. From memory I’m sure the only distilleries they don’t have amongst their inventory are Lagavulin and Talisker. Starting out in Aberdeen, Cadenheads built up a formidable reputation for quality spirits before relocating to the other end of Scotland, or Campbeltown as its known. If the rumour mill is to be believed this bottling is from the last Glenkinchie cask that Cadenheads possess meaning its just joined an illustrious list.

Glenkinchie is a real survivor having been in production since 1837 from its base in East Lothian. This includes during the Second World War as it was given permission to maintain output during the conflict. It’s never been a huge presence in the single malt market yet has avoided the closures of the 1980’s that ended distilling at St Magdalene and Rosebank. Both of these closed distilleries are sadly missed and you could query why Glenkinchie managed to outlive its Lowland brothers. Various factors were at play including its appreciation by blenders and the accessibility of the distillery site compared to Falkirk and Linlithgow.

Distilled in 1987 and bottled at 28 years of age in April 2016, this is one of the oldest Glenkinchie’s we’ve seen. Just a year after it was distilled, Glenkinchie became part of the debut Classic Malts series that has proven to be a very successful concept for Diageo. This bourbon hogshead provided 240 bottles at a strength of 53.3% and as usual its natural colour and non chill filtered. Expect to pay around £130 if you can track down this rarely seen whisky. That’s a good deal when you consider the 24 year old Glenkinchie recently revealed as part of the Diageo 2016 releases will set you back around £300. Yes, amazingly overpriced despite the effort with the packaging and labelling from Diageo. Plus friends who have tried the 2016 Special Release tell me its a little boring and far too woody. 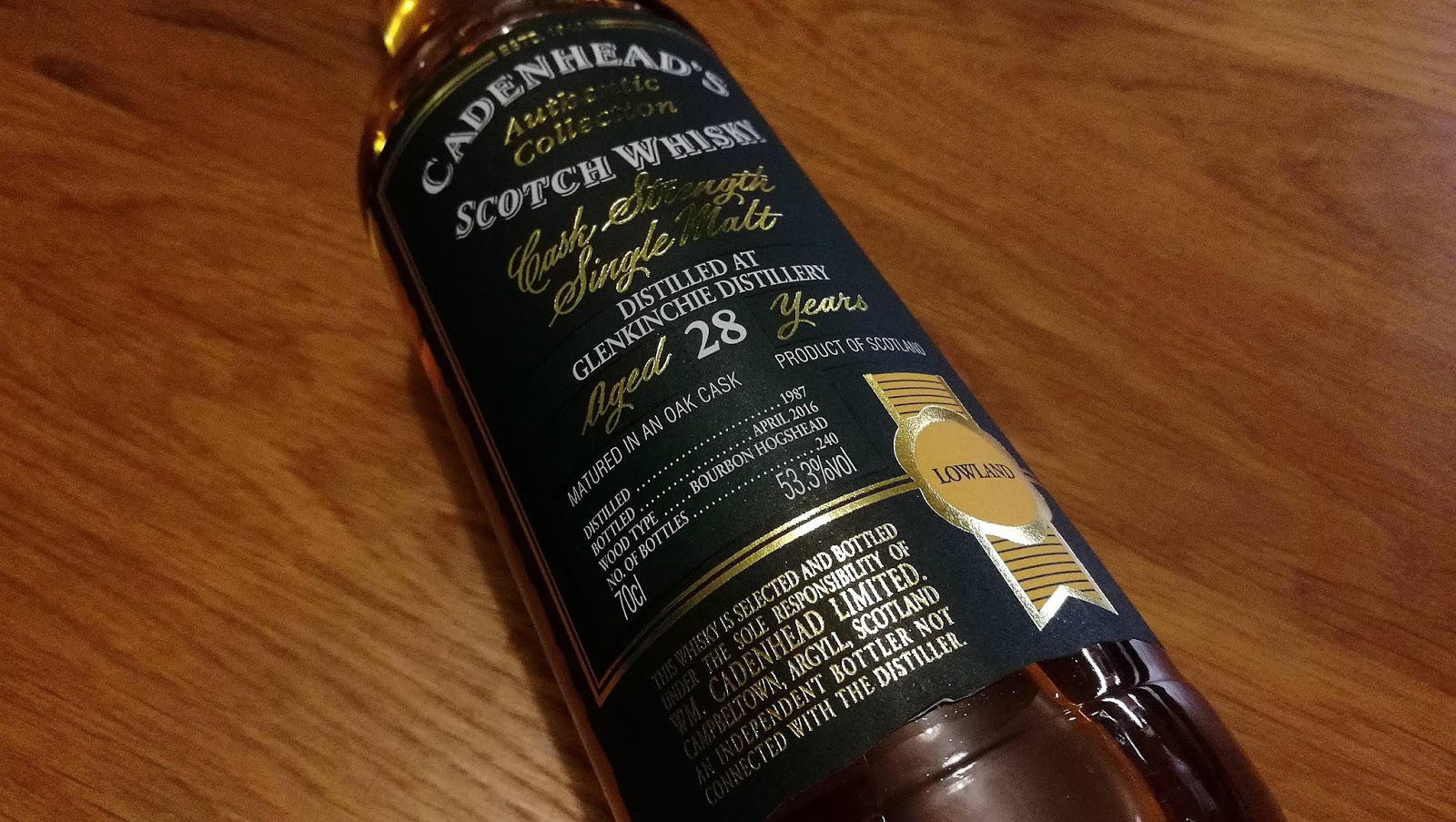 Colour: light auburn
Nose: peaches and tinned pineapple. Very juicy which you’d expect from a Lowland distillery but not the everyday Glenkinchie we know. That tropical feel continues with coconut, icing sugar and then meringues with a buttery aspect. Just there amidst the undergrowth a touch of smoke, mint freshness, a little melon and a rich honey.
Taste: a big emphasis of ripe fruits again with grilled pineapple and vanilla sauce. Malty as well, this is a whisky that makes you question what Glenkinchie is doing wrong today. Barley sweets, sour cream, green apples and it does benefit from water.

Overall: seriously if you tasted blind you’d never pick out this as being from Glenkinchie. A great old style Lowland nose. I really enjoyed this one but the strong flavours on the palate may not be to everyone’s taste. Still, the best Glenkinchie I’ve had, which isn’t saying much I know, but a new benchmark nevertheless.