Prior to visiting Tamdhu distillery as part of the 2014 Spirit of Speyside festival I would not have been able to pass comment greatly on its whisky. Apart from official bottlings in the 1970’s and a couple of new additions in 2005, it’s been a background player in the industry rarely seeking attention.

The distillery was mothballed in 2009 by the Edrington Group that subsequently sold the distillery to the current owners (Ian MacLeod Distillers) in 2011 before production commenced a year later. Under the new ownership much like stable mate Glengoyne distillery, an upturn in fortunes has soon followed with 2013 heralding the debut of the 10 year old expression that I’m about to review.

The distillery tour itself is already on Whisky Rover here and is worth checking out for the experience. Sadly Tamdhu is not regularly open to the public favouring open days during the popular aforementioned festival. It’s a fun tour with all the staff being involved and a real effort to make the experience hugely enjoyable. I also sensed a real pride in what they produce and their dunnage matured sherry cask whisky is the equal of many a famous neighbour.

The genesis of Tamdhu is very interesting as in 1897 a group of local businessmen including those involved in classic whiskies such as Johnnie Walker, Dewars and Bulloch Lade united as investors to help establish this new distillery. Its purpose was then to provide much needed whisky for their popular blends whilst not sacrificing quality. The cost in today’s terms was around £20 million which even today is not a figure to be overlooked, never mind in pre-1900 Britain. No expense was spared including the hiring of Charles C Doig to design the distillery and its distillation processes. Even the distillery train station has a few marvellous flourishes of detail and extravagance. It is said that Charles designed no fewer than 56 distilleries including Aberlour, Balblair, Dufftown, Glenlivet, Lochside, Old Pulteney, Parkmore and Talisker. The complete list reads like a who’s who of Scottish distilling with the exception of Tormore distillery; Charles would have been proud to be associated with such a marvellous iconic design.

Unfortunately with all these vested interests Tamdhu has never been able (until recently) to strike out on its own. This is an all too familiar tale for Speyside distilleries that form the backbone of so many blended Scotches. Its early existence was blighted by periods of closure.  When Tamdhu finally went back into production in 1948, after 20 years of silence, it wasn’t until the 1970’s that a single malt was released. Even then Tamdhu didn’t capture the imagination of the public despite offering a solid good value whisky. There was some speculation in recent years that the distillery would be closed for good as the Edrington Group had no interest in the value and heritage of Tamdhu whisky. Instead focusing on the all show and little substance Macallan or the Norse God devoted Highland Park. Tamdhu needed a new custodian and one with a desire (Edrington is not short of money or time) to promote the distillery in a new light. 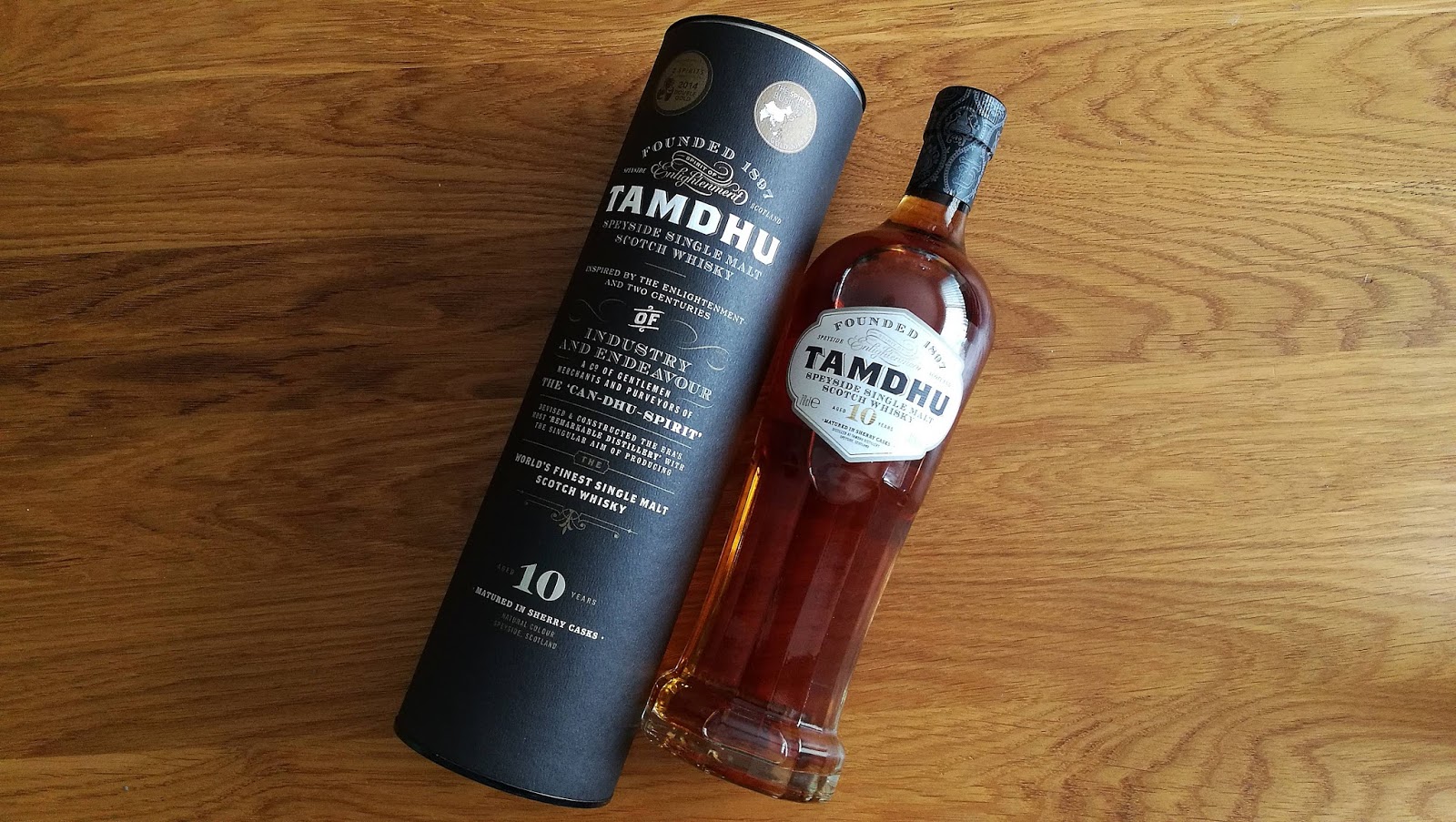 The deal for Ian MacLeod made perfect sense as Tamdhu would be able to support their blends such as the Isle of Skye and King Robert II. The deal included existing stock that meant this 10 year old could be released otherwise we’d be waiting until 2022 for the new spirit to reach this landmark age.

The 10 year old was joined in 2015 by a Batch Strength release that I will pick up in due course given my notes here. The 10yo will set you back around £34 and I actually managed to pick this up on special for £30 adding to the overall good vibes. I’m a fan of the rebrand and Victorian steampunk retro styling which oozes quality and is suggestive of a high quality malt. The design comes from a brand specialist simply known as Good who have also worked with Glengoyne distillery. There’s an interesting explanation of their rebranding process available via their website.

I do find these rebrands fascinating, as a whisky enthusiast as they tend to dominate much of our bar chat and some are successful whilst others prompt debate such as Mortlach and the Haig Club. Unfortunately it’s a necessary evil and may add to the cost of a bottle but when the end result is still an attractively packaged release such as this Tamdhu, at an affordable price with a decent standard of whisky – what’s not to enjoy?

Speaking of which, time for the review.

Colour: natural colour how about that and gloriously radiant it is.

On the nose: a little rust hints at older whiskies in here, an orange on its last legs and dark chocolate. Less emphasis on the vanilla and almonds, instead it has just enough sherry influence to step over these core features. A gentle voyage of cloves, raisins, nutmeg and cinnamon unfolds with a little earthiness from ground coffee in the background. This is more layered than rival offerings.

In the mouth: initially its a creaminess that rolls across the palate, then the orange peel appears and freshly cracked walnuts. More milk chocolate, a hint of ginger, brown sugar, cardamom, vanilla and a dry finish.

If I was being picky then a slightly higher strength would be a great addition here but I suppose that’s what the cask strength exists for. Instead this is a wonderful sherry influenced whisky that isn’t bold or screams with a youthful vengeance. Some patience has been spent here in maturation and I’m sure excellent casks. There’s very little not to dislike with this Tamdhu 10 year old; a high standard for the entry level release. A Taste of Tamdhu Whisky