Yes, you read that right, Caroni and sure that’s not a whisky or a distillery but actually a rum. I’ve seen an increasing number of friends switch to rum or cognac because of the rising tide of whisky pricing. Effectively they’ve been priced out of the market and have the added ball and chain of remembering what the good old days were like.

It’s an easy opt out to state that things ain’t the same as they once were. Granted prices have grown but the whiskies themselves haven’t improved with quality. Things nowadays are very efficient, age doesn’t matter and its all about the wood which turbo charges that spirit more than ever. Or at least that’s what my friends state.

There are echoes of the truth in their beliefs. The latest rebrand and premiumisation of Longmorn potentially adds to those looking for the whisky exit door. It’s a dangerous game that the corporations are playing chasing new markets and customers. Get it wrong and you alienate your faithful core market and then you’re left with Mortlach; a whisky that no one really gets or wants.

A new destination is as I mentioned is rum. My own experiences here are very limited but I do know whenever I visit Cadenheads in Edinburgh they offer a decent selection with age statements and affordable prices. You can appreciate the temptation. The one rum distillery that is name dropped on a regular basis is Caroni.

A recent fleeting visit north to Dornoch offered the opportunity amongst other things to acquire some samples of the recent bottlings from the Dornoch Distillery. Complete with distinctive artwork these are small in outturn and big on flavour including an excellent Arran bottling and a tasty Ledaig. Fans of rum and in particular – yes you’ve guess it – Caroni, we have these two recent bottlings to review.

Before all that I wanted to look into Caroni itself. Situated on Caribbean island of Trinidad, it was a hive of activity with at least 50 distilleries on the isle producing rum. Then the attrition kicked in from the early 1900’s, leaving just 8 by the 1950’s and sadly today there is all but one with the Angostura rum distillery in Laventille. Caroni itself closed in 2002 when the main sugar refinery on the island shut down. This effectively killed off sugarcane production as many local plantations relied upon its services. With no refinery there was no molasses. Today the Angostura distillery has to import its molasses from Guyana. 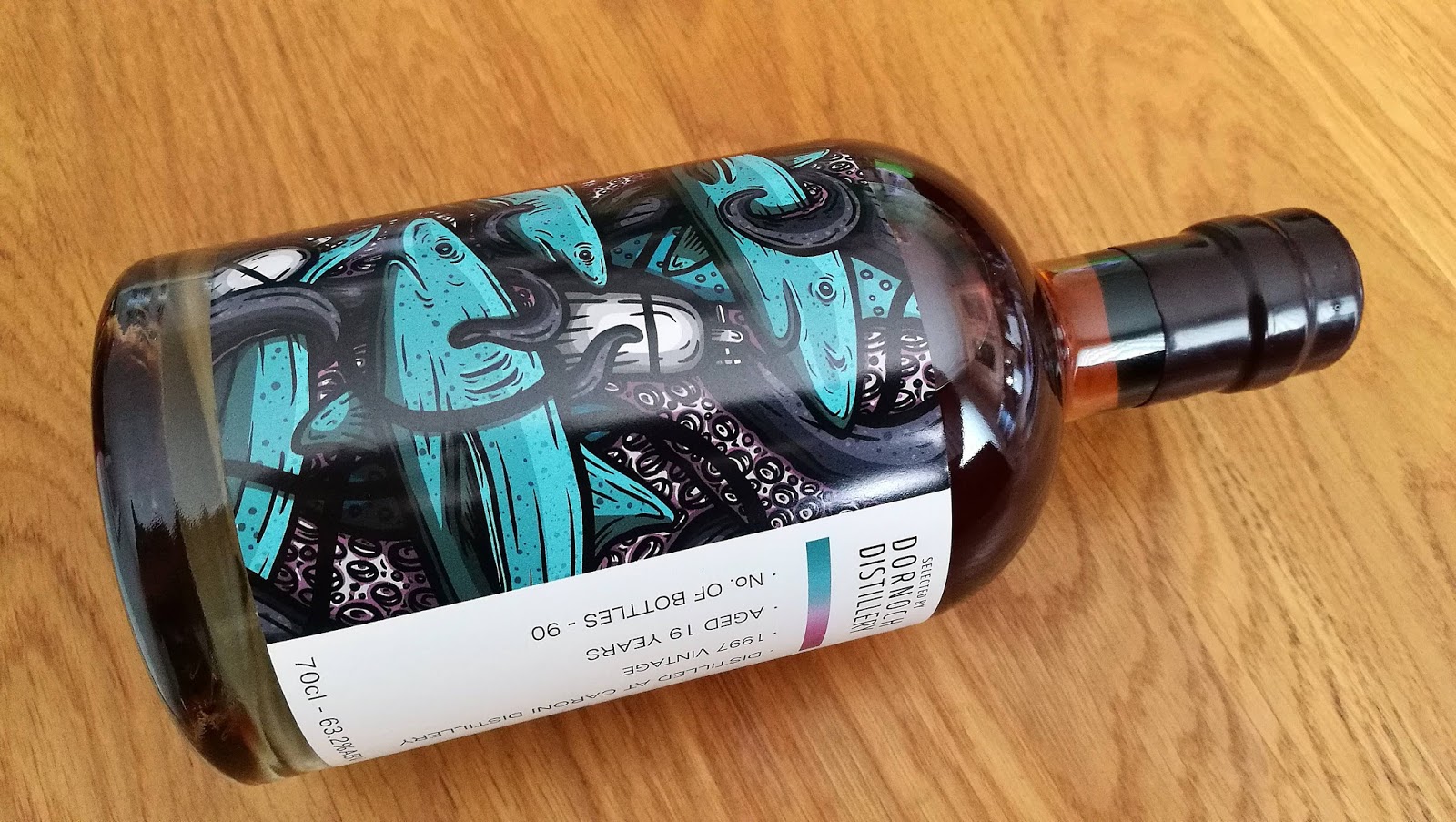 Caroni produced a heavy style rum and at one time supplied the British Navy. Its date of inception varies with 1918 or 1923 being quoted. It’s a style of rum that many whisky enthusiasts find familiar characteristics with. Appreciation is growing as bottlings reduce and casks become increasingly harder to source, so plaudits to the guys at Dornoch for bottling these two offerings.

bottled at 46% vol, outturn of just 48 bottles from a single cask
Colour: hazelnut
On the nose: a dark sugar arrival and then Christmas cake with all the spice and fruity aspects. It just flows nicely. There’s an earthy cola underpinning it all alongside syrup and liquorice. The presence of sage cuts through it all.
In the mouth: lighter than I was anticipating, some caramel, all-spice and maple syrup. Resin with plenty of vanilla and cinnamon bark. More of the liquorice I was picking up on the nose with chocolate and a little menthol.

This is the bottle in the lead photograph with the old school diving helmet designed by Katie Shiach. A rum with enough presence and character to make you think what else is out there when whisky prices are soaring?

bottled at 63.2% vol, outturn of just 90 bottles from a single cask

A hefty upgrade and presence over the 18 year old. Cask strength is the way to go, but either option is pretty enjoyable if you can track down a bottle. Failing that, go out and find another Caroni.