Skip to content
This Littlemill was the star attraction of the Cadenhead October outturn for many purely based on the fact it’s a closed distillery. I admit it’s easy to be swept away with the romanticism of experiencing a piece of liquid history from a bygone producer. However in this current era of bottle flipping and investments, the Cadenhead pricing policy of affordability attracts a new kind of prospective buyer.

This fact isn’t lost on Cadenheads, as on an email message they jokingly revealed that Mark Watt (who selects the casks for bottlings) suggested they should just cut out the middleman and send the bottles directly to an auction house.

It’ll be interesting to see how many appear at auction and if the price sets in around £250-£300 a bottle. It’s a sad reflection on the current times and the ensuing scramble to obtain a bottle of something – god forbid that you might want to actually sit down and enjoy the contents with friends. Hopefully on the eve of their 175th Anniversary celebrations, Cadenheads will keep up the good work and ensure bottles go to home that will appreciate them. Even as I type this the Christmas outturn is about to arrive in their shops and is full of goodness. I’ve sidestepped the obvious attraction of a 23 year old Ardbeg in favour of a sherry cask Mortlach and possibly that Clynelish.

Closed distilleries are a favourite of mine and one day I’ll organise a marvellous tasting involving some of the bottles I want to share with others who will appreciate them. This was partially responsible for my interest in this release, but in recent years Cadenheads have ensured a new perspective on Littlemill and its whisky. Through the Small Batch or single cask releases they’ve consistently released rewarding whiskies and elevated the benchmark that I associate this former Lowland whisky is capable of.
There are some let’s be honest pretty rank bottlings of Littlemill out there. This is especially true of the official bottlings that were on the young side and even some independent releases in the teenage years. These lacked any worthwhile character or sense of a distillery character apart from being rubbish. The reasons for this could be poor distillation, variable casks or just pursuing profit. It certainly seems that Littlemill does improve with age as we reach the dizzy heights of 24 years with this release. It does beg the question how many casks does Cadenheads have within their formidable arsenal? 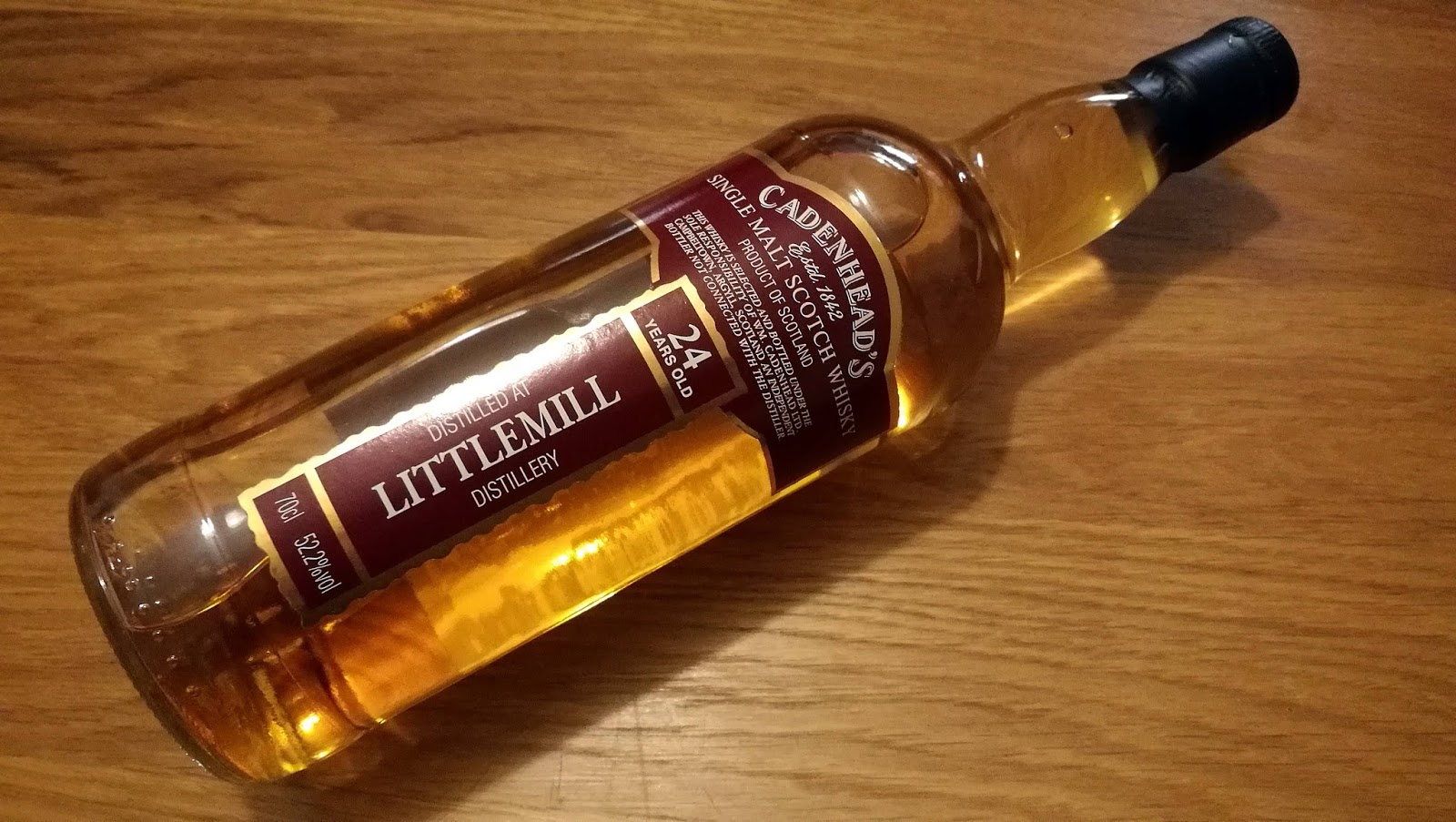 This particular Littlemill was distilled in 1992 and bottled in October 2016 at the grand old age of 24 years. The bourbon hogshead resulted in an outturn of 294 bottles at 52.2% vol and would have set you back £145 originally. Unsurprisingly it sold out upon announcement never mind the actual release date. As ever here at Whisky Rover is comes down to the contents and generally these Cadenhead Littlemill’s have been excellent!

Colour: gold bullion
On the nose: there’s a warm summer’s day to this Littlemill. A light honey interspaced with a floral buttercup aspect. A gentle vanilla presence followed by the sugar rush of tablet and a freshly baked shortbread.
In the mouth: more honey but aptly assisted by Italian lemons. A real fresh vibrancy again taking back to summer with drying cotton sheets, juicy green apples and pears. There’s a hint pepper and a drop of olive oil that carries onto the texture itself. Custard cream biscuits add a vanilla creaminess before an impressively lingering finish unfolds reviving more of the lemon.

It’s a lovely example of a Lowland whisky demonstrating subtle tones of summer and a rewarding balance throughout. A whisky oozing confidence, poise and thankfully free of robust flavours and wood dominance. A welcome tonic to all these peated whiskies and cask finishes.