Cardhu is one of Diageo’s biggest selling single malts and a vital component to its range of Johnnie Walker blends. It’s priced accordingly and for many is too expensive for the experience within the bottle. Cardhu is one of those initial whiskies where many commence their appreciation of malt, before moving elsewhere.
In essence you can see the attraction of bringing No Age Statement element to the core range. This would be more affordable and offer a new dimension to what is hugely respected malt surely? Well in theory yes, but read on. This Gold Reserve was one of two NAS Cardhu releases in 2014, joining Amber Rock in the portfolio. A couple of years on now it’s fair to say that neither has set the world on fire or been proclaimed as a wonderful example of a No Age Statement however I’m just coming to the party now.

I’ve talked a little about Cardhu distillery and its history in a previous article when reviewing a lovely 1980’s 12 year old bottling. In summarising I did say that I’d like to delve more into the current range in 2017, so I’m slightly ahead of the game here with this recent purchase of the Cardhu Gold Reserve.

An opportunity presented itself at a local supermarket with the Gold Reserve being reduced to £25.

At that price I’m more inclined to try and see what the whisky is all about knowing that at £25 my anticipation has been lowered somewhat and keeps my wallet reasonably intact.

Normally this No Age Statement bottling will set you back in the region of £40-£50 depending on where you shop. That’s quite steep when such a range will easily provide you with the option of the Lagavulin 16 year old or surpasses the price point of the excellent Talisker 10 or the Cragganmore 12, which are both classic malts. This Gold Reserve offers a similar presentation style to other entries in the Cardhu range. Instead it’s all about the specially selected toasted oak casks that on paper bring a new dimension to the whisky. It also offers the Axis of Evil when it comes to whisky; namely bottled at 40% strength, chill-filtered and artificial colouring deployed. Come on Diageo just stop such things and give us Cardhu in its natural glory.
Generally we place too much emphasis on colour when it comes to whisky. I tend to keep my imagination engaged when reviewing trying to think of new ways to describe the limited range of colours seen in most drams nowadays. I did read a recent insert in a supermarket brochure about whisky where the self-acclaimed expert suggested that the lighter the whisky, the lighter it will be on the palate, which is frankly utter nonsense. However it does prove that colour sets the wrong expectation. Richard Paterson aka the nose is generally acclaimed in most quarters and yet only deals with the extreme tanned end of the colour spectrum. Other whiskies also have this unhealthy obsession with colour. 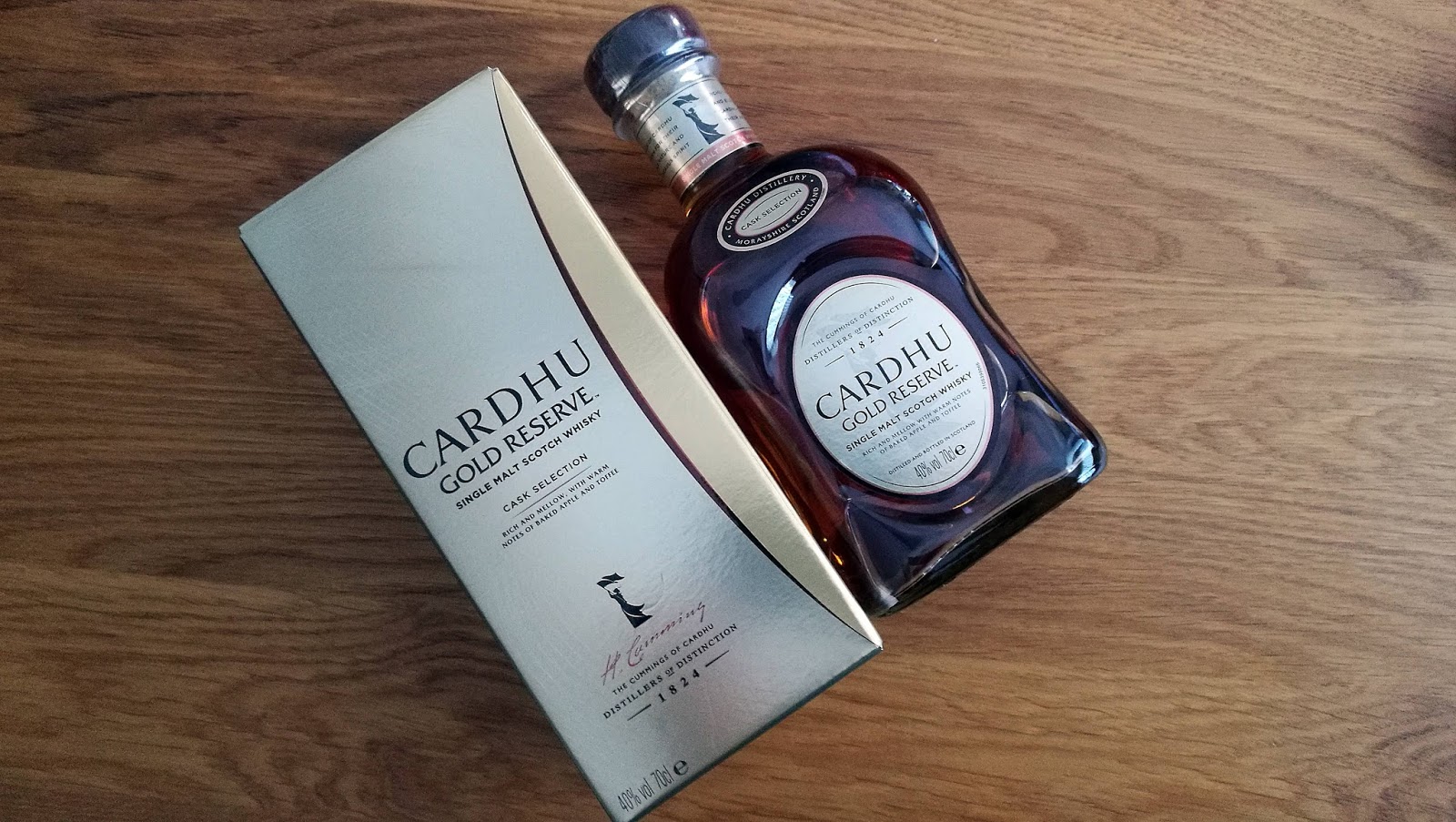 If the whisky was not an appealing colour then the old practice was to stick into a brown or green bottling for retail, or thinking more recently a blue bottle when it offers next to nothing at all. My favourite whisky tastings are those involving coloured glasses that remove the initial bias of the colour. Colour is the least important aspect of a whisky when judged against the nose, taste and finish. That’s because it brings nothing to the experience. Some do claim that too much caramel colouring (E150) does impair the actual taste of a whisky.

Colour: good old karamel its on the box
On the nose: it’s very subtle initially and even then its gentle aromas of freshly cut wood. The faint aromas of oranges, apricots and a buttery quality. Time delivers toffee with a little seasoning and cinnamon bark. A touch of water delivers hazelnuts but little else.
In the mouth: the first sip has you reeling back against the oaky wood influence. Then that slight tingling of alcohol on the tongue suggestive of the youthful nature of this whisky. However I’m persistent if anything so we return for another. Popcorn and varnish. A little chocolate, with honey and a resin almost maple syrup quality. The finish is short and peppery.

A bitter disappointment in more ways than one. Lets try to be positive so I like the bottle stopper featuring a proper cork. I tried coming back this several times and it just didn’t sit well with me. It’s drinkable certainly but the price point at £40 is excessive indeed. I’d forgo the nice cork as a trade for an improvement in the contents, but alas its not to be.