I’m often asked what’s my favourite whisky or distillery. This for me is a difficult question as I tend to hold most distilleries in esteem and have a soft spot for a particular handful. The easiest way I suppose is to consider which distilleries I’ve reviewed the most here over the last 7 years at Whisky Rover and take this as the straw poll.

In essence with my vertical tastings included this will give rise to distilleries such as Bunnahabhain, Brora, Talisker, Tormore and Deanston. It’s not a reflection of my tastes but distilleries I’ve been able to cover – or prefer to cover – on a regular basis. Brora and Tormore need no introduction and neither does Talisker. Bunnahabhain is almost universally loved and supported strong by official bottlings and those from the independent sector. All of this brings me to Deanston.

Set on the outskirts of Doune it’s a reasonably swift 40 minute drive from where I live towards the foothills of the Trossachs. This is a very picturesque region of Scotland and often overlooked by those heading further north or off the mainland. At Deanston you’re always guaranteed a warm welcome and an excellent meal thanks to the café within the distillery. This makes it a popular meeting place for locals and tourists as its still within touching distance of the main cities of the central belt of Scotland.

Established in 1965 beside the banks of the rapid River Teith, Deanston was originally an 18th century cotton mill that was converted into a new distillery. For the initial part of its history Deanston produced for blends and whiskies that ticked the box and little else. Then various changes backstage and the opening of a visitor centre at the distillery marked an upturn in fortunes and confidence. The distillery exclusives are of particular note and I’ve tried to cover these over the years with fond memories still of the Spanish Oak and Toasted Oak.  Oh, that Toasted Oak was sublime but sadly sold out like many of these exclusives to the distillery. And I haven’t even mentioned the amazing 1974 Oloroso sherry cask which is one of the most expensive bottles I’ve purchased to date and was totally worth the outlay.

Needless to say I tend to visit Deanston several times a year and with the approval from Mrs Rover for the outing. I’ve actually lost count how many times I’ve taken the tour in various guises from a chocolate theme to the ghostly Halloween experience with all being enjoyable. I’m due a return shortly as well, but for now let’s make do with this distillery exclusive that was kindly provided by the folks at Deanston and their parent company Distell. 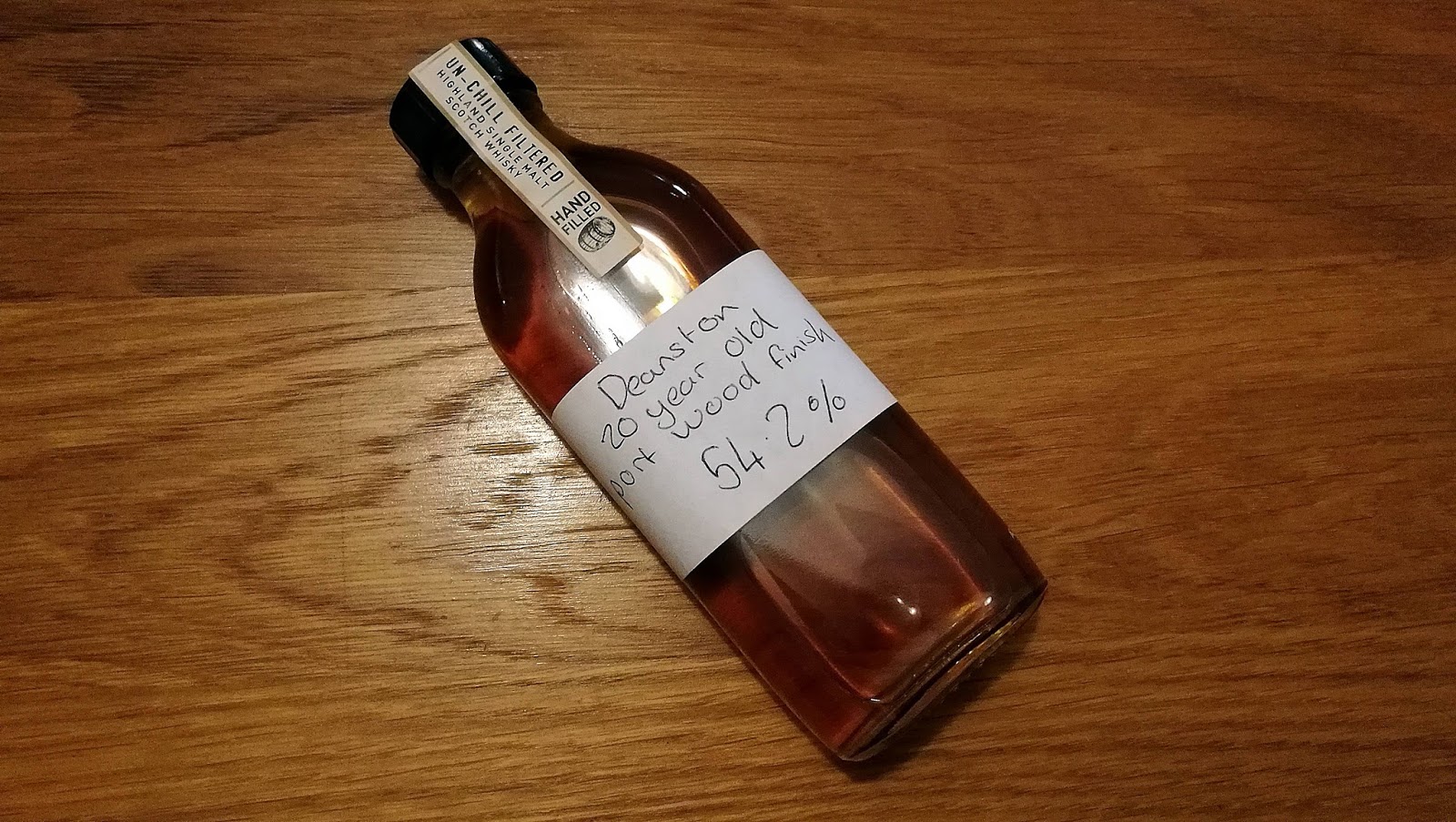 Currently available at the distillery exclusively, it’ll be shortly appearing online from early 2017 when the online Deanston shop launches. This will set you back £110 and incorporates the core beliefs of the team by being natural colour and non-chill filtered. Bottled at 20 years of age and at healthy 54.2%, it’s been finished in Port Wood for 4 years after spending an initial 16 years in ex-bourbon casks. That’s a longer finish than some actual whiskies we see on the market today.

Colour: caramel popcorn
On the nose: a refined port influence here with red grapes, orange and red liquorice but its a gentle coating over caramel. There’s density to the sugar presence and stickiness almost verging on toffee pudding with maple syrup. Subtle spicing with coffee granules, resin and tobacco. Water reveals raspberries, butterscotch and honey.
In the mouth: a weighty arrival with plums and stewed fruits. A transition into cranberries, more caramel, dark chocolate, raisins and mocha flavours. A brief floral note followed by the bourbon cask oak, vanilla and cigars. Cocoa persists into the finish.

Another winning entry in the Deanston distillery exclusive archive. It confirms the adaptability of the Deanston spirit whether its bourbon, sherry, Spanish oak or a Marsala cask. The end result is always worthwhile and engaging.

My thanks to Deanston for the generous sample of this new release.