Official releases of Clynelish are particularly rare with the staple 14 year old often being overlooked for other contenders in the Diageo stable. I’m a fan of the aforementioned 14 year old and I’d put it above the Distillery Exclusive bottling that just didn’t rest well on my palate. Clynelish is predominately destined for the Johnnie Walker range of whiskies with particular emphasis towards the Gold Label Reserve bottling.

Nowadays Clynelish is well supported by the independent sector and continues to have a cult following amongst enthusiasts. Clearly there is an appetitive for its produce and one that Diageo felt the need to tap into and highlight its quality by releasing a Select Reserve in 2014 and again in 2015. Sadly the combination of a high price tag (£495) and a No Age Statement release as a debut did not go down well generally. Paying a considerable sum for a whisky with no details on its makeup it was a roll of the dice by Diageo and needless to say you can still find this bottling very easily.

What we do know is that the 2014 Edition comprised of five vintages and five different types of casks. Normally Clynelish is associated with your classic American refill and the odd sherry butt release from the independent sector. Instead beyond the core inclusion of American refill casks, also included were American first-fill, rejuvenated oak, bodega and European refill casks. On paper it does seem to be like some rather clever blending and engineering has been utilised for this recipe.

Artificial colouring has been used which is a disappointment, but on the plus side it is bottled at 54.9% and 2,964 bottles were produced at that rather misguided price. I’d suggest whenever you put a high price tag on something regardless of whether its whisky or a sports car; tell the prospective customer why that pricing strategy is warranted. All we do know beyond the standard information on the packaging is that the youngest whisky in here is 16 years old. So technically by the Scotch Malt Whisky Association rules this is a teenage whisky with an over 30’s price tag.

I was fortunate enough to purchase a ticket for the Brora VIP tour in 2016 as part of the Dornoch Whisky Festival. This included a tasting of the 14 year old and I actually skipped on the distillery bottling itself having not enjoyed it greatly previously. The final section of the tour was a glorious tasting of the last 3 years of Brora Special Releases commencing with the 2014 release. Before this magnificent trio were unleashed we were invited to try the 2014 and 2015 Clynelish Select Reserves as the support act. They could not compare to the Brora’s that day but having a sip of each I felt they did at least warrant their own dedicated article. Squirreling away a decent sample – note just enough as  I’m not a greedy grab it all kind of guy unlike some – where I could sit down in the comfort of my own home and really give these whiskies the attention they deserve. 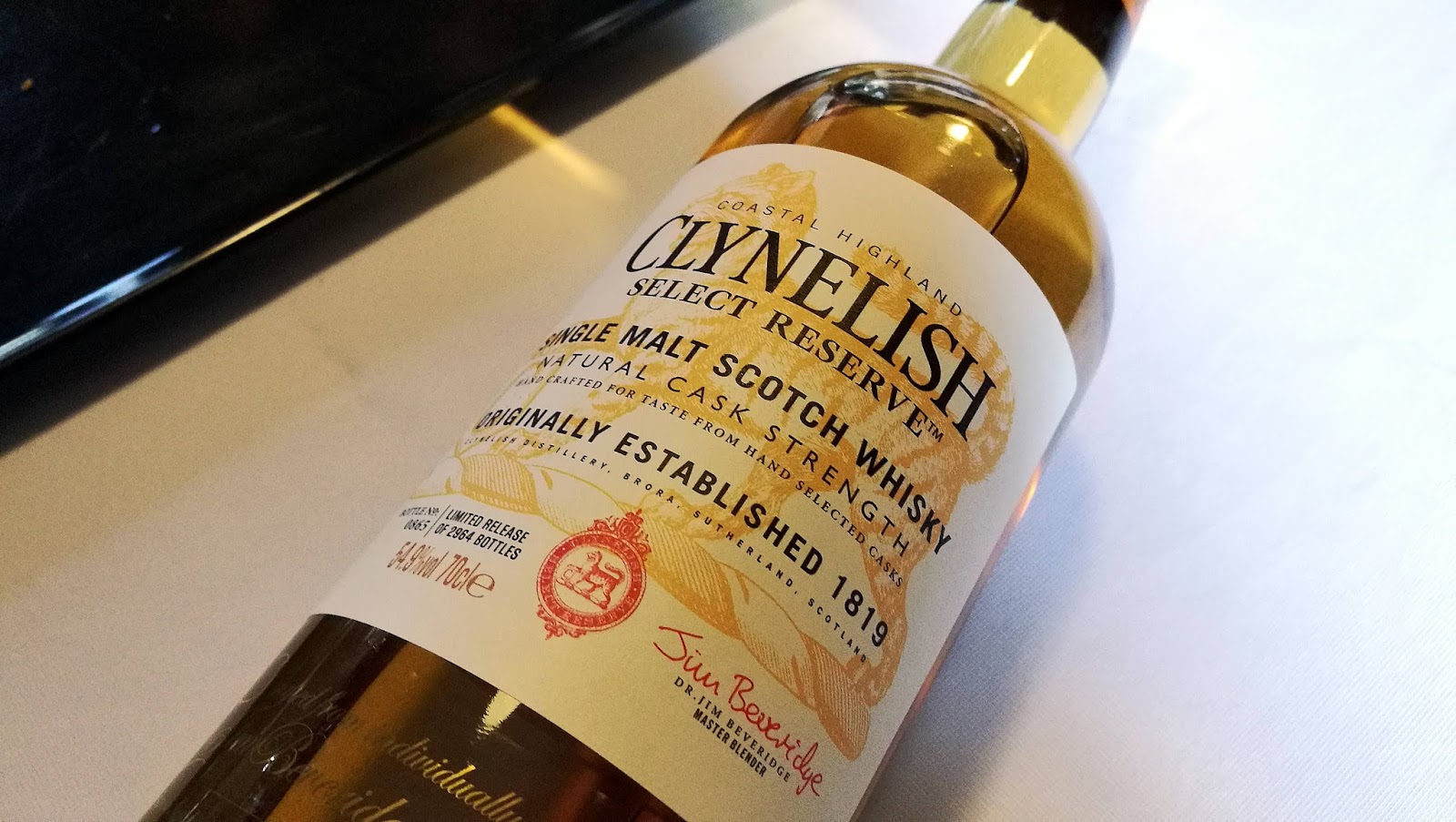 On the nose: a light arrival, very delicate with aromas of honey, caramel chew and Rich Tea biscuits. Suggestion of apples and butterscotch in the mix with a little ginger.
In the mouth: on the palate are juicy apples and a plasticine presence that moves across into the finish. Some pepper and dark chocolate the wood kicks in with vanilla and a little cinnamon and nutmeg.

Well its no surprise to see this discounted at some retailers as its hopelessly overpriced. I’m not even that taken with it in the glass either and there was a sense of disappointment amongst our group at Brora. It’s a bit of a whisky dodo in reality and overpriced by about £400.

Moving onto 2015, Diageo tried to roll the dice once again with this second edition Select Reserve. For this version Jim Beveridge selected American refill and first-fill casks, plus rejuvenated refill American oak hogsheads. The European contingent was represented by ex-Sherry and refill oak butts. An outturn of 2946 bottles at 56.1% was released at an increased retail price (£550) with colouring used once again.

We know that there are four different vintages within the DNA of this whisky recipe as Diageo released more details than in 2014; perhaps due to the hostility of the feedback as well as their sales reports? The youngest in the mix is 15 years of age so again you’re paying even more for a teenage whisky by SWA rules. Hence why age has been totally avoided in this series. What matters is the whisky itself and if it matches the price tag? There’s only one way to decide whether 2015 was an improvement isn’t there?

On the nose: very different with initially juicy fruits and a sappy quality. A hint of smoke beneath the hay, lime and vanilla custard.

In the mouth: a very pleasing thick and luscious texture. This carries the vanilla once again and shortbread. A little marzipan and a touch of bitterness with some cocoa and peanuts. A little lemon in there and grapefruit with flint, orange peel and that characteristic waxy finish with a touch of salt.

A very good effort and enjoyable to drink but it all comes back to that asking price. Eh, no thank you.

I’m just not taken with either of these in reality. I’d have been absolutely furious after purchasing a bottle and then actually tasting its contents… A bit of a swindle going on here. Both are drinkable with the 2015 being a better whisky but neither even come close to satisfying that price tag. Purchase a really old Clynelish from an independent bottler; it’ll be streets ahead of these official disappointments.