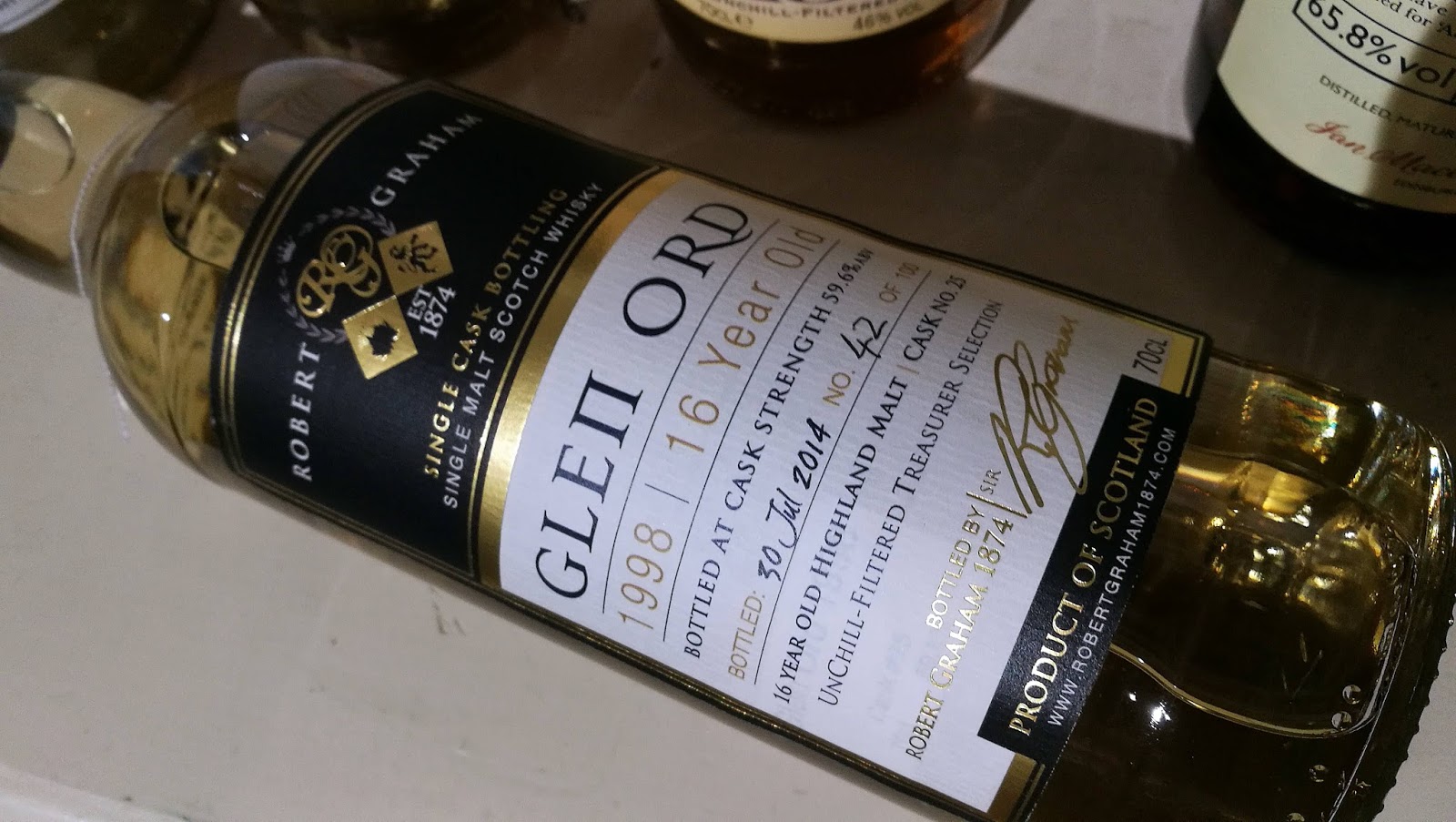 Now here is something interesting as you don’t see too many Glen Ord’s bottled independently and that’s a shame. The distillery is a massive player in the Diageo stable supporting the incredibly popular Singleton range that is the corporate giant’s secret weapon to torpedo the likes of Glenlivet and Glenfiddich from the top of the sales charts.
We could descend into a debate over the Singleton not actually being strictly a single malt from one distillery with other varieties being assisted by the ugly sisters of Dufftown and Glendullan. It wasn’t until recently when I had the opportunity at the 2015 Dornoch Whisky Festival to taste the core Glen Ord Singleton expressions (including age statements exclusive to the Far East), that an appreciation was developed. Later that evening the guys behind the Dornoch Distillery put together A Dram Less ORDinary that offered participants the opportunity to experience Ord whiskies from the 1960’s onwards.
Suitably informed, you then appreciated just how little Glen Ord sneaks out into the hands of the independent bottlers. The distillery itself has been the subject of a massive upgrade and I’m pleased to say that some respect was given to the existing buildings that echo Glen Ord’s history. Established in 1838, it’s a Highland survivor when many other distilleries have fallen by the wayside. Today it can now produce 11 million litres annually, which on paper currently is ahead of Glenlivet but still behind Glenfiddich. Game on ladies and gentlemen.
Since 2015 I’ve experienced the Dornoch Castle Whisky Bar private bottling and enjoyed a youthful and engaging 2004 11 year old release from Cadenheads. It seems clear that whenever you have the opportunity to try a Glen Ord at cask strength it offers character and the mystery of why we cannot have more of the stuff. Perhaps that’ll change in the forthcoming years with all this whisky maturing for markets that may move onto gin or something else eventually.
This Glen Ord was selected by independent retailer and bottler Robert Graham for their Treasurer’s Selection. This is the pinnacle of their current expressions and recently I’ve also enjoyed a 1984 30 year old Invergordon and a 1985 28 year old Littlemill to highlight just two from this range so the emphasis on quality if certainly apparent. Whilst this Glen Ord isn’t particularly old, it’s a rare whisky in this form. Bottled at a mouth tingling 59.6%, this comes from a hogshead cask numbered 25 that resulted in just 100 bottles. This will set you back £120 and I’m on the fence regarding the price as it comes down to the contents itself.

Colour: cream soda
Nose: crushed almonds and a fresh mint arrival. Green apples with echoes of marzipan and the sweetness of caramel almost merging into a creamy coffee. Leaving in the glass for an extra while reveals wine gums, boiled sweets, nutmeg and syrup. With water Rich Tea biscuits, basil and cinnamon.
Taste: initially its the thrust of alcohol but returning confirms the presence of vanilla, apples and green tea. Water tones the arrival down and ushers ripe melons, mangos and a little cheese into the arena. A burst of sweetness with white chocolate and pineapple cubes round off a fresh and revitalising dram.

Overall: a Glen Ord with something to say which isn’t often the case with the official bottlings. It does require a little patience and practice with water but there’s plenty of whisky to go around. The only downside being at £120 I think this fella is the wrong side of £100.

The mighty Glen Ord, or just simply Ord, is one of Diageo’s powerhouse distilleries. Providing a huge output of spirit it ranks amongst the top..