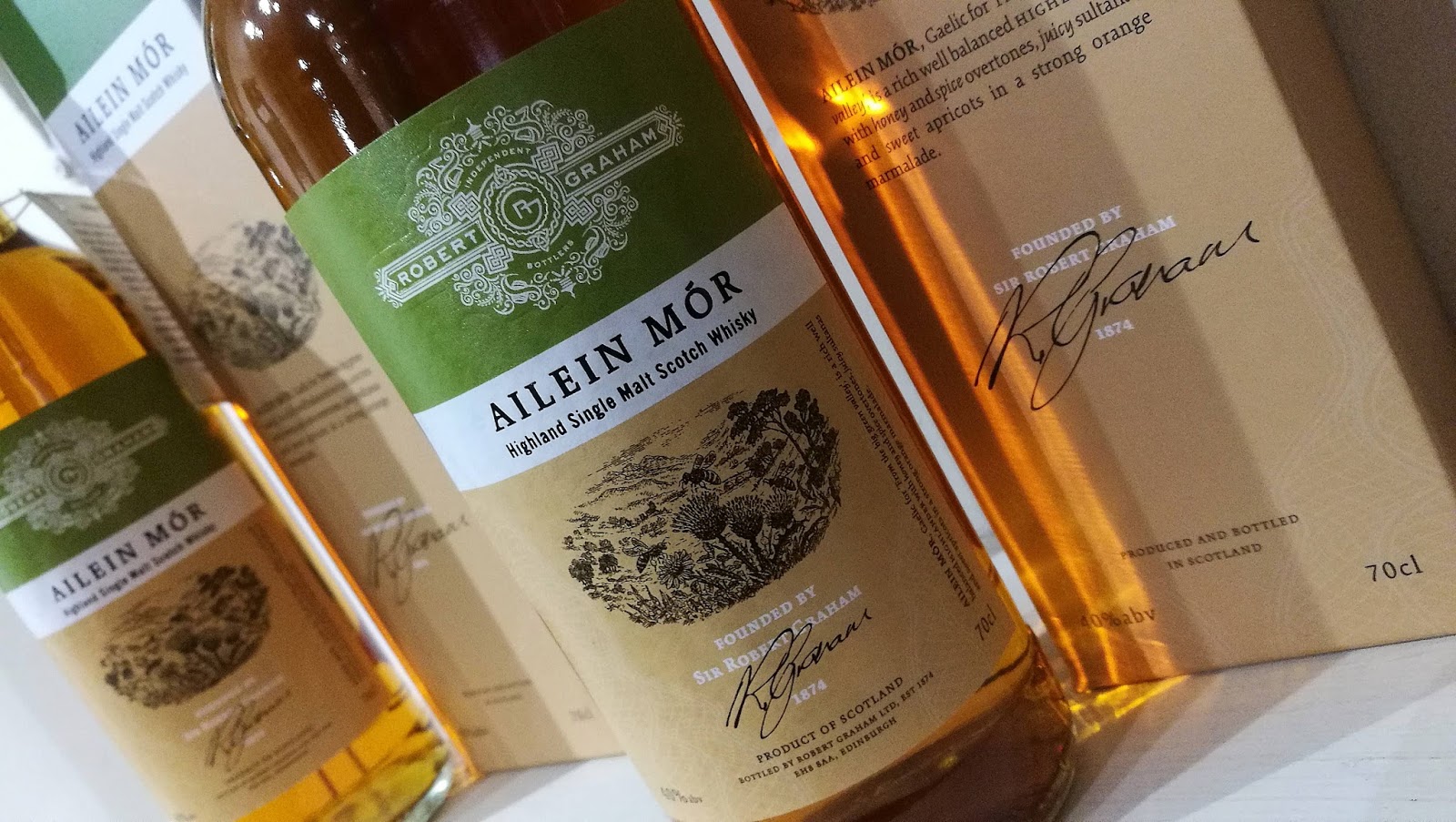 I’ve been chipping away at several of the Treasurer’s Selection releases that form a major part of the Robert Graham arsenal. Beneath this exclusive range exists other bottling’s from the award winning retailer that deserve a little of the Whisky Rover spotlight. So when recently when the trio of expressions that form their unspecified single malt range received a visual revamp, it felt like the ideal opportunity to take a stroll into the mystery realm of Ailein Mor.
This is a single malt from the Highland region of Scotland so you can already limit the potential candidates that will be behind this bottling. I’m not going to speculate or guess the source, as what matters at the end of the day is the whisky experience divided by the actual cost of the bottle. Here it’s on paper a reasonable £37.99, but bottled at a slightly disappointing 40% strength with I suspect some chill filtration involved but I’m unsure regarding colouring. To be fair these are fundamentals of this price point and many who enjoy white label or supermarket single malts are price driven rather than minor quibbles such as filtration, colour or the alcohol level.
It’s an award winner from 2014 which is always worth quoting, but as I explained to a critic via Instagram who was defending the honour of Kilchoman, awards are so numerous and widespread now that sometimes I feel as if I could win one by simply making my own blend. It is remarkable how just a little addition of Tormore lifts up any blend.

Detour aside, what I tried to explain to the Kilchoman Defense League was that awards generally are great for marketing but have become so numerous and widespread that few actually matter. For any enthusiast word of mouth is a fantastic resource and the nearest equivalent of this online Whiskybase where you can gauge opinion from a widespread demographic and not just some nutter from Fife.
Ailein Mor is Gaelic for from the big green valley minus the Jolly Green Giant. There are plenty of valleys (or glens) in Scotland so that’s not a specific clue so instead let’s talk a little about Robert Graham and their latest award. If you didn’t know they recently won the Icons of Whisky award for Scottish Multiple Outlets Retailer of the year. That’s an honour actually worth talking about for a moment as Scotland is the bastion of whisky and it still actually matters. I know it’s difficult to envisage at times with all the focus on London and the soft handshake brigade. North of the border we know how to make whisky, drink whisky and therefore sell the stuff. 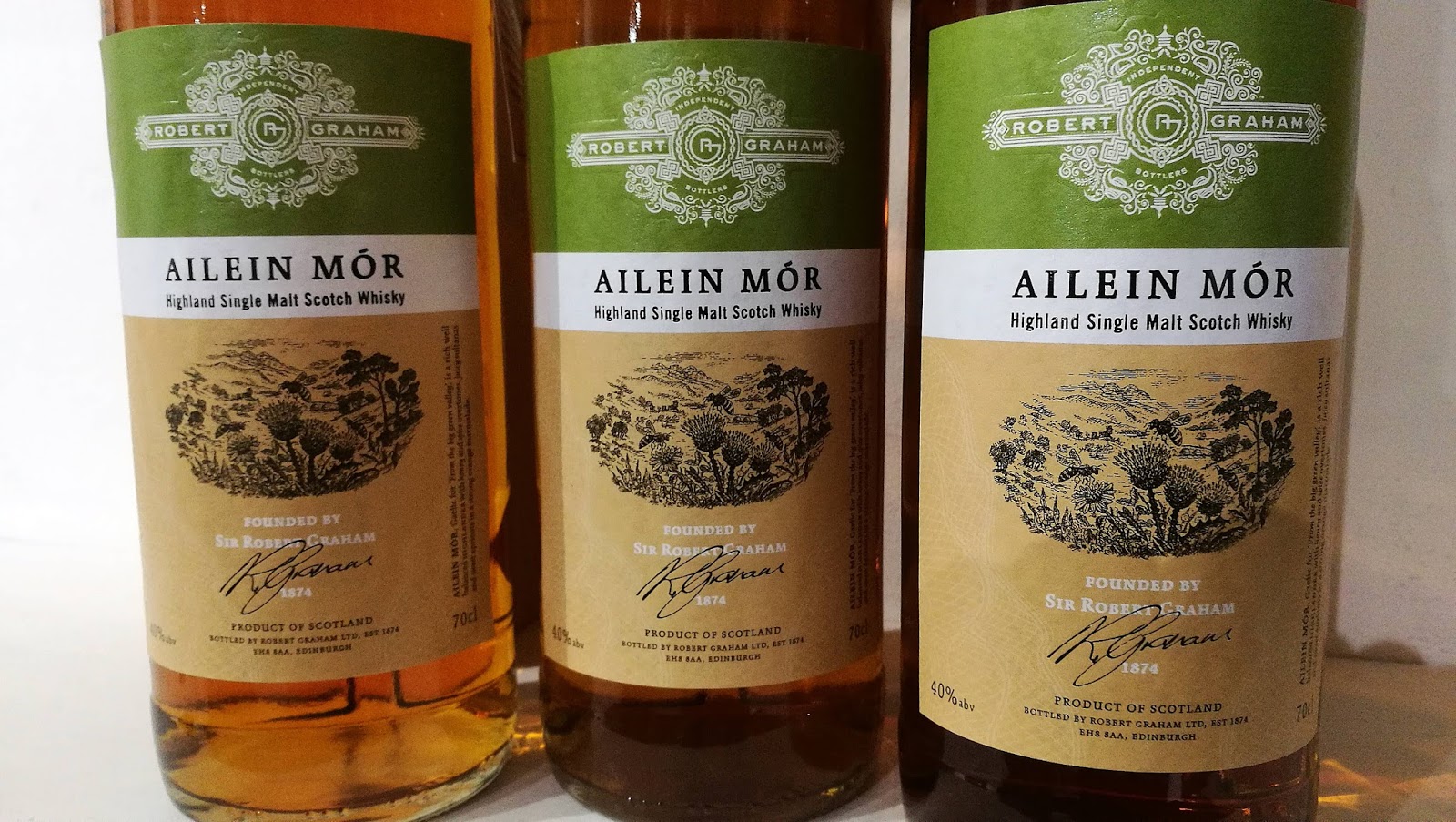 A walk down the High Street in Edinburgh will present you with several outlets all offering a huge variety of whiskies at various prices. Royal Mile Whiskies are a stout presence and making inroads online whilst further down the hill is Robert Graham and then beyond the mecca that is Cadenheads. To win this award such competition had to be overcome and when it comes to whisky retailing Cadenheads is almost invincible. Cadenheads is the Death Star in terms of variety, quality and pricing. It literally devours the opposition for breakfast and then goes and bottles a cask of Littlemill that afternoon simply because it can.
The award is potentially a marker and as Robert Graham bottle their own whiskies, an important beacon in attracting potential regular customers beyond the tourist swarm. You achieve this by bottling your own whiskies and maintaining a high standard with attractive pricing. The Treasurer’s Selection is aimed more at the enthusiast but beneath exists more opportunities for impulse purchases in the £30-£40 bracket hence Ailein Mor. Enough waffle as I’ll have to write another two introductions for their other entries in this range shortly, so for now let’s have a dram of the stuff.

Colour: golden syrup
Nose: quite malty at first with resin and the aforementioned syrup coming through. Then ginger nuts, dried oranges, white grapes and almost verging on Chardonnay-like zing. Fudge sweetness and some caramel goodness. Water brings out more of the orange with added honey.
Taste: a real buttery texture and a tinge of the alcohol (in a good way) despite being 40% strength. Honeycomb, shortbread and vanilla nougat enforce that creamy aspect that lingers. Fruits with oranges and apricots especially towards the end with a toffee finish. In fact more of an orange toffee finish with the addition of water.

Overall: an excellent single malt from an unnamed Highland distillery. Whilst the origins remain a mystery I can confirm its very well made and full of flavour. Ideally I’d like this pitched a little lower on the price scale but the experience wins you over and I suppose a little mystery and intrigue is always refreshing?

The body may lack a little weight which reflects the strength and youth of this whisky but in reality I’m just nit-picking as overall I’d actually be happy enough to purchase a bottle of this. It’s a very approachable with friends and one you can produce during an evening that will go down well with whisky drinkers of all tastes.