This is one of the more unusual places to write some tasting notes as I’m currently flying across the Atlantic and the choice on Virgin when asking for a whisky consists of the Dewar’s White Label blended Scotch. So here goes then.

Firstly, some background as Dewar’s if you’re not familiar is one of the classic blends tracings its roots back to Perthshire. It was founded in 1846 by John Dewar who also involved his sons – you can see their names mentioned on the bottle cap.

Dewar’s is closely linked to Aberfeldy distillery, which I reviewed the revamped 12 year old bottling. Reflecting back on that whisky its easy to see why the distillery was established to support the Dewar’s blends; its characteristics lends itself so well to a blended Scotch profile. Bacardi acquired Dewar’s and its distilleries in 1998 after a bidding war for the handsome sum of £1.15 billion. This move immediately gave Bacardi a foothold in Scotch whisky. Recently we’ve seen the distilleries within its portfolio given new exposure as standalone single malts. Aberfeldy aside, we’ve also had the opportunity to experience Aultmore, Craigellachie, Deveron and Royal Brackla.

So far I have failed miserably to cover these whiskies as I just haven’t gotten around to purchasing them. Ok we have the aforementioned Aberfeldy 12 year old and also The Deveron 12 year old release. These have been solid, well packaged and designed whiskies that just lacked that extra dimension. I envisage as I rise up through the age statements things should accordingly improve. I’ll be trying my best to cover the Aultmore range in the coming months as I’ve already purchased 2 bottles.

Today the White Label it remains an affordable Scotch sub-£20 and speaking from a UK perspective not one I can recall actually seeing much on the supermarket shelf. However a recent trip to America confirmed just how widely available it is and the popularity of the brand. Pretty much every store I visited offered this as their staple blended Scotch alongside Johnnie Walker Red Label. As I suggested this blend is at the bargain end of the market with Dewar’s currently pushing their Double Aged 12 year old expression. It’s the gateway to the range and should in theory tick all the major boxes without causing offence. 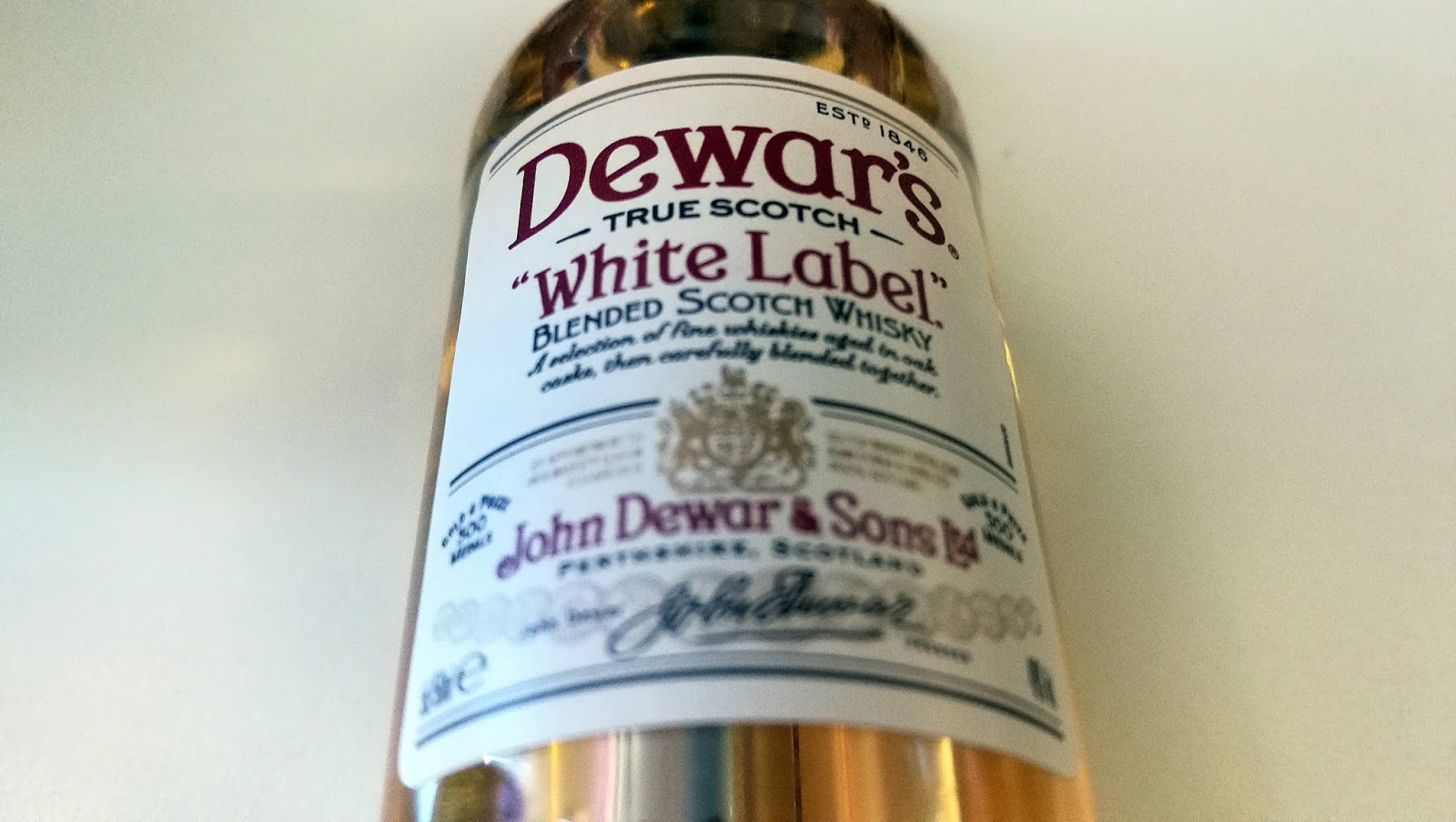 With the hum of the engines and air conditioning, a moment of tranquillity with a whisky – whatever its origins – is a welcome moment for reflection. High above Greenland this was a taste of home and drifting into holiday mode. Time for that review then…

Colour: butterscotch.
On the nose: a classic presentation
of toffee, honey and a hint of orange. The more experienced whisky drinkers will pick up the grain but it’s only a brief presence in the background. I’m also picking up icing sugar and white grapes.

In the mouth: a very mellow blend created not to challenge or intrigue. A fleeting portfolio of flavours with more toffee, honey and a little pepper. It’s on the finish that the grain resurrects.

Ultimately you may have low expectations of the White Label and in reality it’s very much a standard inoffensive blend. Given the choice I actually prefer the bog standard Grants Signature blended Scotch in comparison, which tends to be a similar price point.

Since this review I’ve purchased the Dewar’s 18 year old so watch out for that review next month.
CategoriesBlends
Tags
dewar's