By some weird twist of fate I may have become one of the leading authorities on Tormore. I’m not talking here about the lavish distillery but rather its official produce. Since sitting down at a former distillery cottage on the site with the Tormore brethren, my appreciation of Tormore has grown from the first initial bottling to the current range.

It’s only when you put together these vertical tastings that you can truly appreciate the essence of any distillery and not just Tormore. From that marvellous vertical there were just a trio of official bottlings missing. We had the 5 year old hand grenade 1980’s bottling absent but as we had identical release at 10 years this seemed acceptable. Then there was the current 14 year old, but we had gone that extra mile and purchased the current 16 year old anyway. That left a rather rare bottling from the 1970’s which was the second official release from the distillery and this is what we have here.
This is one of those whiskies you can pass around to general widespread appreciation. I’ve done this on the side of a couple of recent tastings and no one could guess the distillery. The reaction when I revealed the source was always worth seeing as the individuals comprehended the essence of Tormore. A few comments along the lines of shock or not having tasted anything like it before were common. This may of course be based on the limited experience of the individual but positivity ruled.
I must thank again my friends at WhiskyLifeStyle for picking this one up in the Netherlands for me and delivering it Scotland intact and for exactly what they paid at auction. A very kind gesture and one that you have to replicate. Folk talk about the #whiskyfabric which I find utter nonsense as you treat people how exactly you expect to be treated. That’s my motto with or without whisky.
Back to the bottle which is a totally different design and its contents have accordingly changed. The debut Tormore 70’s release was a distinctive whisky full of green apples and unusual characteristics. A design revamp and the introduction of the Pure Malt statement also seems to have ushered in a change with the liquid providing a richer experience as you’ll soon discover.
Tormore has been appreciated by the minority for sometime now. I recall a tale about the Highlands and Islands Malt Whisky Club which I’m unsure exists today. However to summarise the whiskies of Scotland they selected six whiskies featuring two from Speyside. One was the Macallan and the other was the Tormore. From its early days Tormore has been a quality whisky appreciated by blenders and the independents. Sadly today’s range is a little disappointing with the cask strength Chivas entry being the best of the trio. 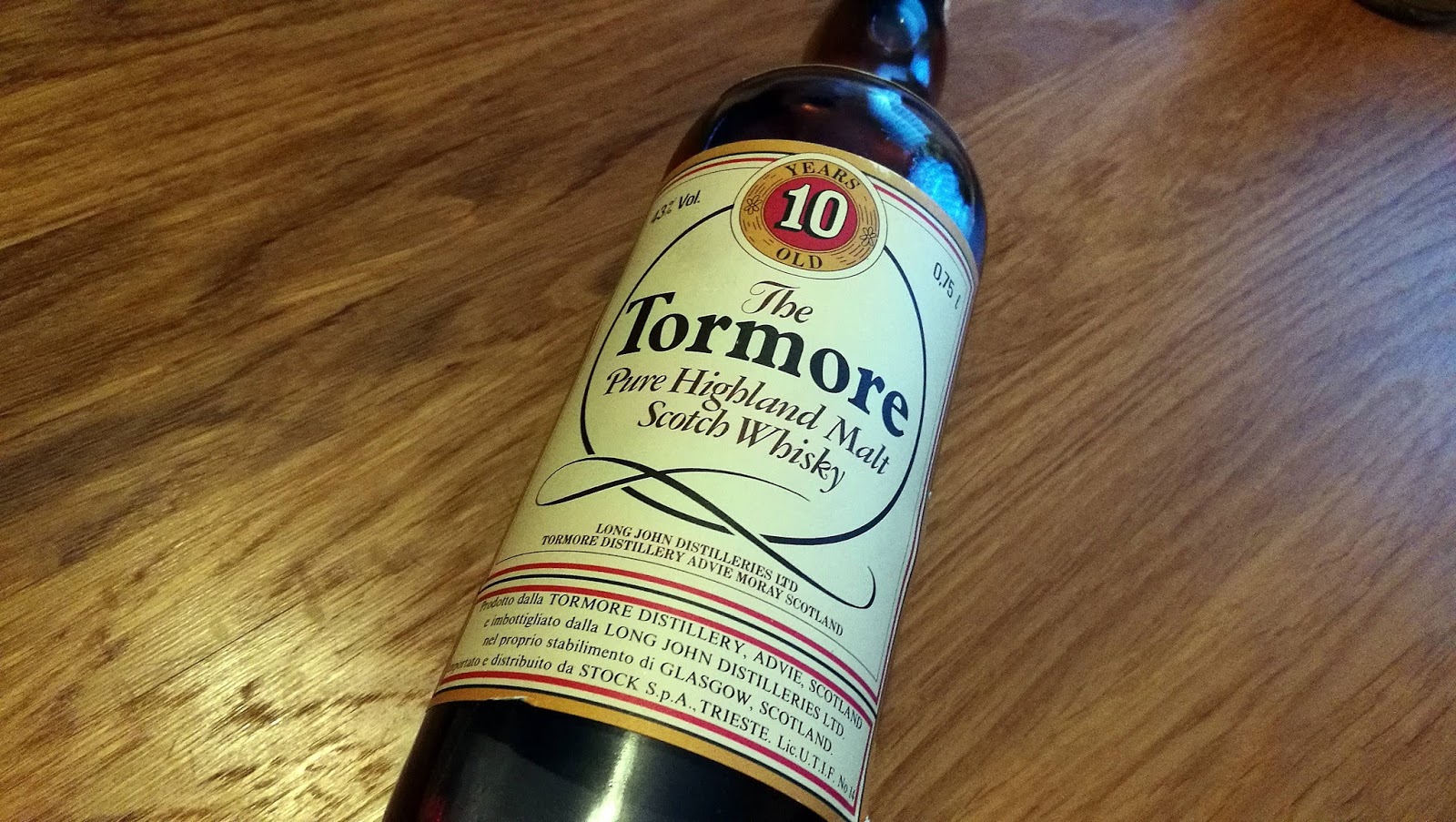 This Tormore was bottled during the ownership of Long John Distilleries who built the distillery at the tail end of the 1950’s to provide whisky for its range of blended Scotches. Long John itself was taken over by Whitbread in 1975 which helps us date this bottle more specifically. As there is no mention of Whitbread it’s very likely this example was bottled prior to 1975. Whilst the label proclaims 10 years old, this will be the minimum age of the whisky within. It’s another certainty that older whiskies from the distillery will be in this recipe.

Distillation didn’t commence until 1961 by all accounts so the window of age will only be a couple of years unlike more recent examples with GlenDronach and Ardbeg who used excessively aged stocked to keep maintain the standard of their core releases. Another consideration is that Tormore’s still’s were doubled in size from 2 to 4 in 1972, so here we have a whisky from the original duo.

Bottled at 43% volume for the Italian market this is one of the rarer expressions of Tormore and frankly the best official bottling I’ve had to date. We know Tormore in the 1960’s is pretty overlooked and rarely seen, but when there is a bottling such as the 1966 Samaroli sherry cask, it can be sensational.

Colour: worn bronze
On the nose: oh my this just says an old style whisky. There’s plenty in here with maltiness, figs, stewed plums, dark chocolate and raisins. Walnuts and worn leather, a brass rubbing, oranges and cloves. There’s a touch of tobacco smoke and baked apples with honey as well. Just epic!
In the mouth: a luscious texture is apparent featuring more oranges, barley sweets, figs and apricot jam. It’s madness that so much flavour is noticeable at a decade in age. A mineral quality, followed by a sugar rush with dark chocolate and cherries.

Immediately a top 10 whisky for me. It’s a true eye opener and in all likelihood there are whiskies older than a decade in here but not by that much given the date Tormore starting producing. It begs the question why the current range tastes nothing like this whatsoever? A perfect example of how whisky has changed in the past few decades and not often for the better.