Truth be told this isn’t the original Brora vertical I’ve been promising for a while now. In early January somehow Blogger decided to transpose my Tormore CasQueteers review text complete with photographs over the Brora work in progress. Much like dropping a bottle of whisky that smashes upon impact, it was a devastating loss.

A great introduction thanking everyone who kindly provided samples for this epic tasting and documenting some of the history of the distillery to put these whiskies into context. Gone. I still cannot explain it nor did any amount of tinkering revive the sacred text. How, when and why I suppose doesn’t matter now as its done and perhaps my Tormore whisky decided to kick Brora off top spot. Processes will be changed internally at Whisky Rover and such an event won’t happen again. It’s not as if I can literally pull more Brora out of thin air given its prices these days! Thankfully I haven’t smashed any bottles…

It was a knockout blow after writing several great (or I thought so) summaries of these fantastic whiskies and then being faced with having to do it all again. I just don’t have the heart to recreate what’s been lost so this is something else. The tasting notes that I had written down for most of these Brora’s were still to hand. I had kept some samples of those I’d already written so I’ve had to go back again whilst also reviewing the couple I had left to do.

So I hope you enjoy the notes and the ride. Actually for once, I’ll be glad to see the back of this article. The original concept was to go through these in order of the year of distillation, which we’ll keep intact. Doing this vertical and sitting down with these Brora’s just underlined the quality of the distillery. A friend told me a tale set in the pre-investment days of whisky and a Brora tasting they did in a pub in Edinburgh many years ago. The night was engulfed in silence as each participant tried to digest Brora after Brora that just grew in quality. All the whiskies that night were A class and in some ways by doing this tasting I can appreciate what a marvellous evening that must have been and the captivation whisky from this distillery demands.

A special mention to Jacqueline at Clynelish who hosted the Brora VIP Tour last year as part of the Dornoch Whisky Festival that provided some of the material for this vertical. The lead photograph above was taken in the Brora bothy on the distillery site. It’s just across from the Brora still house so a marvellous occasion to drink a couple of whiskies from the distillery whilst within its confines. A marvellous malt moment. Also to Noortje at WhiskyLifeStyle for a 1981 sample and Claus at the Malt Desk for his offering. Also not forgetting the guys behind the Dornoch Whisky Bar for the 1977 Rare Malt. If you’re interested in Brora then do check out my other reviews over the years and if you’re in Sutherland please visit Clynelish and especially the sleeping giant across the road.

Now then, let us begin. 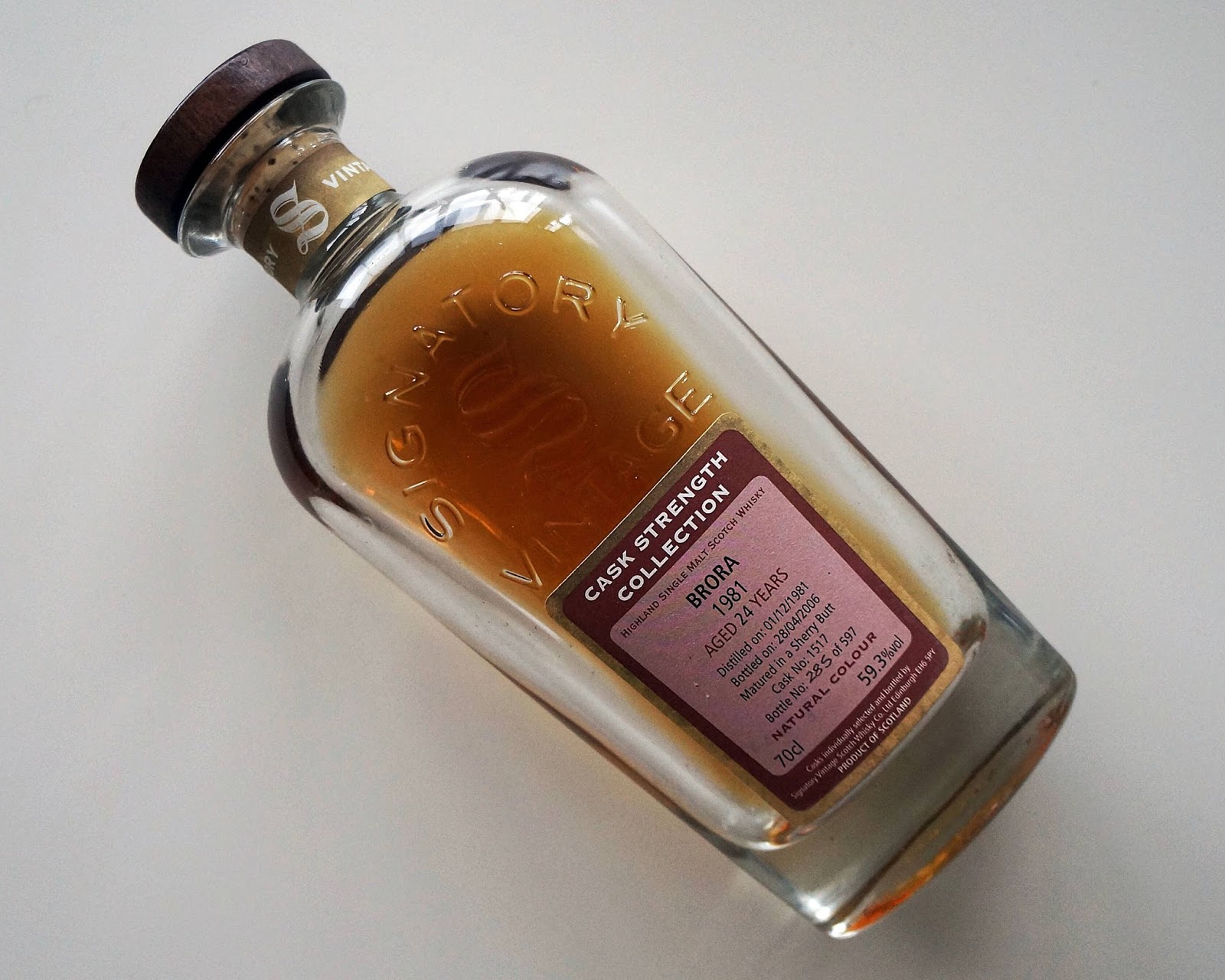 On the nose: far from a sherry monster, a nice harmonious arrival with stewed apples, some pineapples and cranberries. Now orange marmalade oozing into a waxy character and then the Brora earthiness. This is matched with the coastal salt but not hugely to the degree you’ll read about later on. A lemon freshness cuts through the vegetation. Water brings out more creaminess I felt and a light spicing of ginger and all-spice.
On the mouth: joyous really with butterscotch almost maple syrup in its sweetness, roasted nuts and more sea salt. Plenty of cask influence with dark chocolate, red grapes, raisins and a waxy leathery aspect but not overpowering the spirit. A decent peppery finish has me reaching for another (if there was one).

I know Noortje preferred this with water as you can read in her review, but I quite liked it straight although water did add another layer. Certainly agree this one needs time to reveal its true delights. A very good opener to proceedings I feel.

Colour: honeycomb
On the nose: initially restrained with orange marmalade then spices towards the end with ginger. Apricots are noticeable as is aniseed and more honey notes. Barley drops, toffee, chalk and a little of that salty spray but not too much.
In the mouth: a zingy quality with lemons and oranges, a little cranberry juice as well and just an echo of peat with definitive Brora earthiness. A rich luxurious caramel, dark chocolate flakes, cinnamon and remnants of cloves almost a ham joint glazed and studded with them. Oranges return for the sweeping gentle finish.

Interestingly this is only just a couple of casks behind the first Brora in this vertical. So we can probably say with reasonable certainty that this was distilled sometime towards the end of April in 1981. It feels that the cask has exerted more of an influence and was therefore more active during maturation.  As a result it feels the least ‘Brora’ of all the whiskies in this vertical. Still, pretty good and a worthwhile experience. 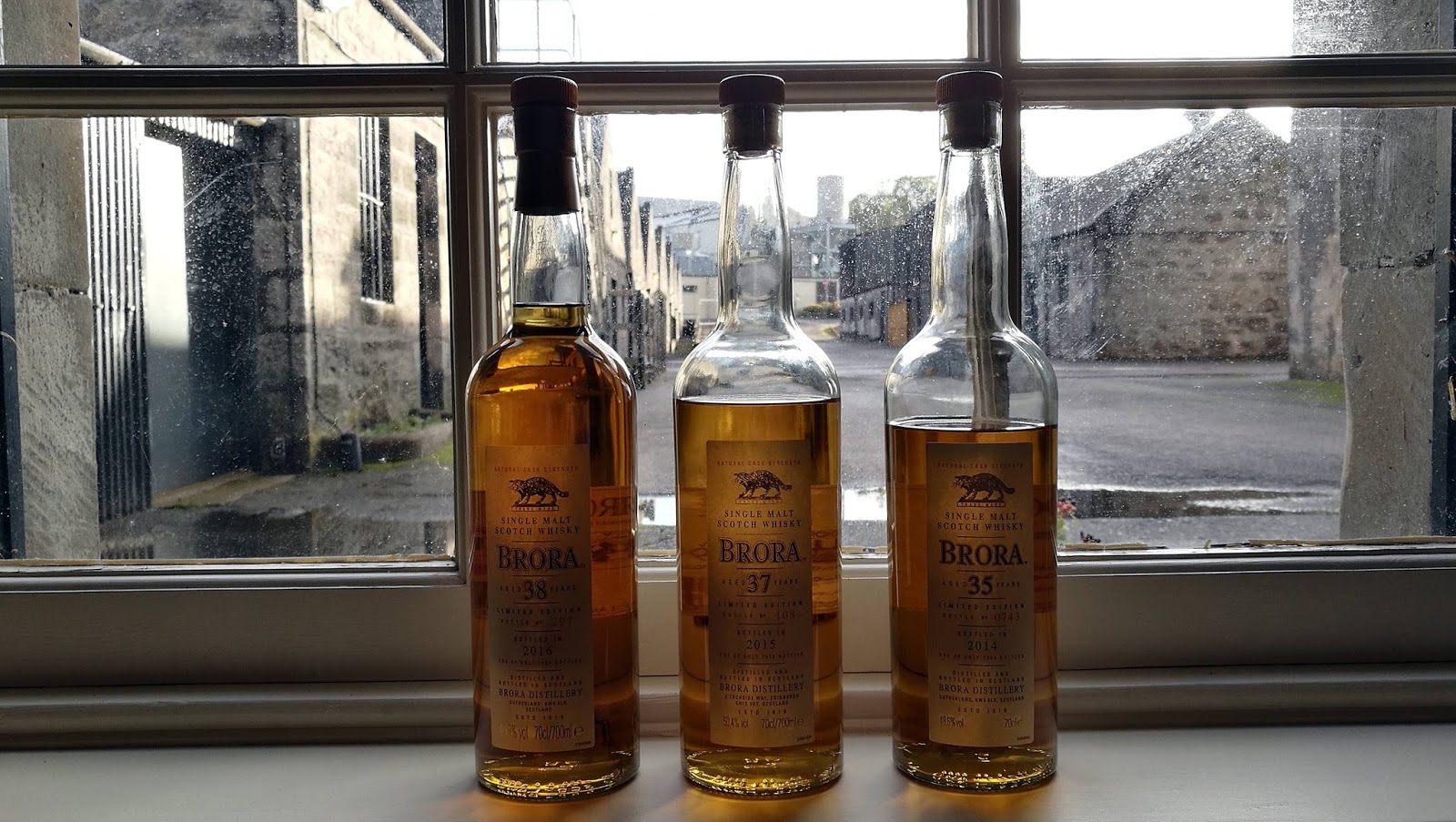 Colour: a golden hue
On the nose: an element of smoke reaches out of glass drawing you into deeper delights. A fleeting salty brine leads into oranges, toasted almonds and vegetative peat. More fruit with apricots, pears and lemons layered on a freshly done drop scone.
In the mouth: this oozes confidence and there’s peat certainly but not in yer-face-Islay style. More of that salty aspect again and given its coastal location it shouldn’t be a surprise. Linseed oil, bacon fat, red apples, charcoal all come and go before the peppery finish takes us into the smoke once again

An utter delight and a very high benchmark for our remaining official bottlings. Almost the complete package offering us coastal and peat elements with the subtle aspects of the cask. Nothing feels forced or generated. Epic.

Colour: beech wood
On the nose: oh jeez this is something else. More of those costal aromas but this time I’m finding the smoke is leading the charge. Tinned pineapples and peaches, almost a fruit salad. Somewhere along the line vanilla marshmallows from a barbeque, bacon fat, dirty vanilla and a fleeting waxiness.
In the mouth: its all here and beautifully presented with poise and balanced; how much is this again? Salted caramel or more rather smoked salted caramel reaches out, some rolled tobacco, Highland toffee, liquorice, thyme and we’re heading back into the garden for decaying foliage.

It’s not often I’m lost for words but this was one of those whiskies and what I believe the afflicted refer to as a Broragasm. My favourite of all the special releases I’ve tasted. I’m going for a lie down rather than try to summarise the depth here.

Colour: olive oil
On the nose: it’s the saltiness that strikes home here with that brine costal quality. The smoke shrouds the glass as well. There’s an earthy aspect as if you’ve scooped up a handful of compost and that decaying vegetative aspect. It’s rugged but also possess pineapples and red apples with a diesel almost Springbank aspect.
In the mouth: more salt and smoke come through with this rugged powerful whisky. Yet it has layers of subtle flavours with all-spice, walnuts with the skins on, apples, cinder toffee and a finish that continues to linger long after you’ve finished the last drop of whisky.

It’s a close run thing but the 2016 is a more forceful dingy character than the 2015 release. Both show the great elements of Brora at work, yet I’m still drawn towards the 2015, but wouldn’t knock back the charms of 2016. Yes, I suppose that makes me a Brora slag? 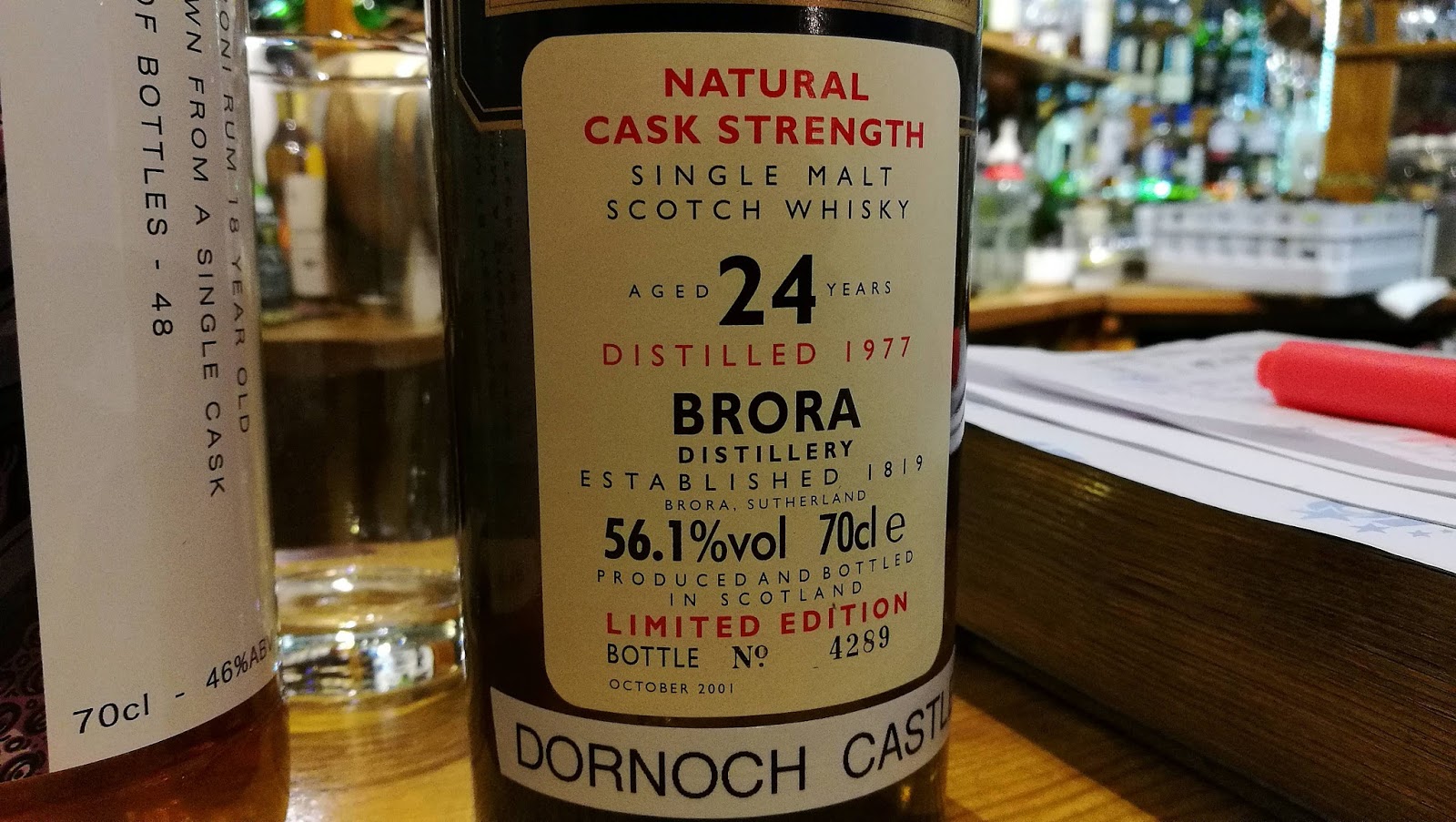 Colour: auburn blonde
On the nose: that earthiness once again but not as pronounced more of a smoky influence. Tick for the coastal salt spray but again, somewhat restrained here. Almost a haggis-like spicing with plenty of pepper as well, with fennel, golden syrup and a minty dark chocolate. Honey dripped over pineapple cubes and red apples with fleeting floral aspects.
In the mouth: a lovely texture with more honey and a full-on middle orchestra of the Brora farmyard earthiness and citrus notes. More peat, some oiliness and dirty vanilla. The journey into the finish is marvellous and then that lingering fruit loaf essence of what has been lost and a touch of dryness followed by smoked pepper.

In some ways it feels more organic and less directed (or engineered) than the trio of special releases yet possesses much of the same characteristics. A relative youngster in this vertical, 1977 is one of the classic Brora years and it shows clearly.

In summary its been a blast for many different reasons. I’d like to think that I can put together another Brora vertical as the effort is truly worth it. On this experience its reputation is well deserved. If I was forced to pick out a favourite from all of the above then it would actually be the 2015 Special Edition as it had the most sustained impact on me. Truth be told the rest are pretty special as it is.