Finally, some Tomatin coverage as I know it’s been lacking. I had hoped to attend an evening with the distillery manager at Royal Mile Whiskies in 2016 but family news put paid to that and rightly so. Family comes first, then Tormore and then the other whiskies.

Tomatin brings back memories of driving north which I do several times a year, as I know when I see the distillery sign, we’re not far from Inverness and the final section of the drive. Needless to say I rarely feel the inclination to pull over due to the unsocial hour these trips occupy sometimes. However, I have made a conscious effort in 2017 to cover the distillery to some degree and I have a few single cask releases here kindly provided by Barry over at the Whiskyphiles. I’ll talk more about the distillery itself in subsequent articles so we’ll move on.

For now, the Tomatin Legacy seems the perfect place to start being the entry level No Age Statement bottling from the distillery. It’s designed to be your introductive whisky to this Highland outpost. A chance supermarket purchase as it was on special at just £20 rather than the average price I’ve seen circa £25 which always helps. Off the record the chat is that this is around 4 years old and that for some distilleries is enough if the spirit is good and the wood decent.

Legacy is matured in a combination of ex-bourbon barrels and virgin oak casks. The use of the latter is a popular trend as originally virgin oak generally tends to be too dominant for whisky. The degree of this varies depending on which continent the oak was felled as some varieties remain too encompassing versus the spirit. However here the blend and it is a single malt blend of sorts as its from one distillery has been smoothed out with the inclusion of those ex-bourbon barrels, which are the staple of the industry. Also worth considering is the style of the spirit. Some distilleries that prefer a Lowland tradition with more floral, citrus and lightness characteristics may not be ideally suited to virgin wood. Those producers with a more robust style of spirit may adapt to greater success. 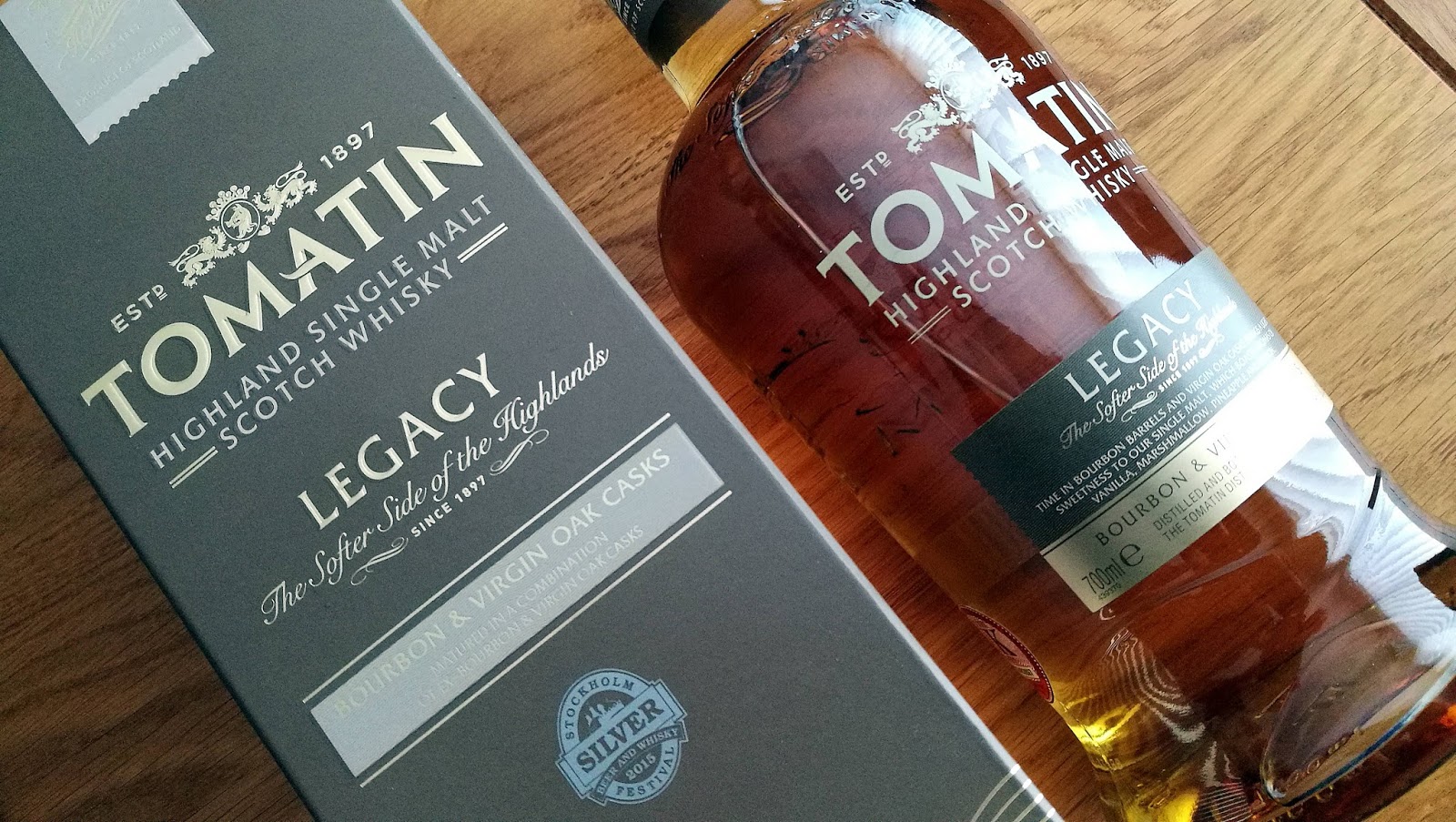 Ultimately the details on the make-up of the Legacy are scant which the Scotch Whisky Association prefers. We could in theory just have a specific time mainly in ex-bourbon barrels before being finished off in the virgin oak. That’s the stimulating part of whisky as there are various ways and means and it comes down to the end result.

Bottled at 43% strength, I believe this also features artificial colouring and chill-filtration. Readers in North America will find this on the shelves as the Tomatin Dualchas, which is Gaelic for heritage or tradition so along the same lines as Legacy. I guess it sounds sexier? Legacy was revamped in 2013 and this here is the new bottle shape and styling that is quite likeable really albeit you’re paying for this. Visually it ticks the boxes especially at this price-point. Little details such as the bottle cork also give a good impression so what about the contents?

On the nose: really punchy with the vanilla and pineapples. A hint of orange and Custard Cream biscuits. Some chalk dust, green apples and shortbread. Water brought out some caramel but also I felt highlighted the youthful spirit also.

In the mouth: creamy initially then vanilla and then a tinge of young spirit alcohol, toffee, lemons and a white pepper finish. There’s some greenness in here best expressed as Kiwi fruit. Water was beneficial delivering more honey, it felt much more creamy and reduced the spirit and green influence.

The nose is a little flat in that it just offers a handful of characteristics from the outset and there’s little progression. The palate offers even less. It’s a solid, well made whisky, but exceptionally young and the result of aggressive use of virgin casks to inject flavour.

At its original price point at my local supermarket shelf (£27.99) its overpriced despite the favourable presentation. Supermarket white-label whiskies are offering much more for about £10 less. It’s still better than some of the mass produced blended Scotches I’ve recently yet not hugely. I’m sure Tomatin can do better than this so we’ll move on and that’s a big issue as ultimately you want the Legacy to entice further interest in your whisky. With that in mind the Legacy isn’t successful, but for many will be a pleasant enough everyday whisky.