A cheap, young bottling from a generally very average distillery is not the most exciting whisky to talk about after the holiday season. But I’m guessing you’re out of cash after Christmas so a cheap whisky may be just the thing. I bought this bottle before the New Year as it happens, whilst Christmas shopping. I was hunting down a sub-£40 bottle that would qualify as a guilt-free purchase.

Sometimes it’s quite nice to play whisky roulette when you’re in a whisky shop. I would only ever do this with cheap bottles. I wouldn’t have a bit of gamble on something unless safe in the knowledge it would not make a significant dent in my wallet. £36, or thereabouts, is the price I paid for this Càrn Mòr Strictly Limited Dufftown 7 Year Old. I purchased it from Gauntleys of Nottingham – my nearest specialist whisky shop, even though these days it’s a bit of a trip for me to get there (always worth it though). Also it’s from indie bottler Càrn Mòr, whose whiskies I had looked at and enjoyed recently. This one was a bit younger than those however.

I’m not against young whiskies by any means (so long as they’re not young grain whiskies, which technically speaking need stacks more time in order to develop flavour). Indeed, young malt whiskies can be very good. What interested me about this bottle though was that speaking to Chris at Gauntleys, he suggested that this one had in fact been finished in Austrian Riesling casks, although they hadn’t actually put this on the bottle.

Austrian Riesling! That’s bound to make Dufftown whiskies taste more interesting. Dufftown – I realise, even though I’ve visited the distillery – is something I’ve not covered at all on Malt. Its whiskies are generally a bit rough and ready. So my impulse purchase gene kicked and I came away with this Càrn Mòr bottling of 7 year old Dufftown single malt, drawn from a pair of bourbon barrels (officially). 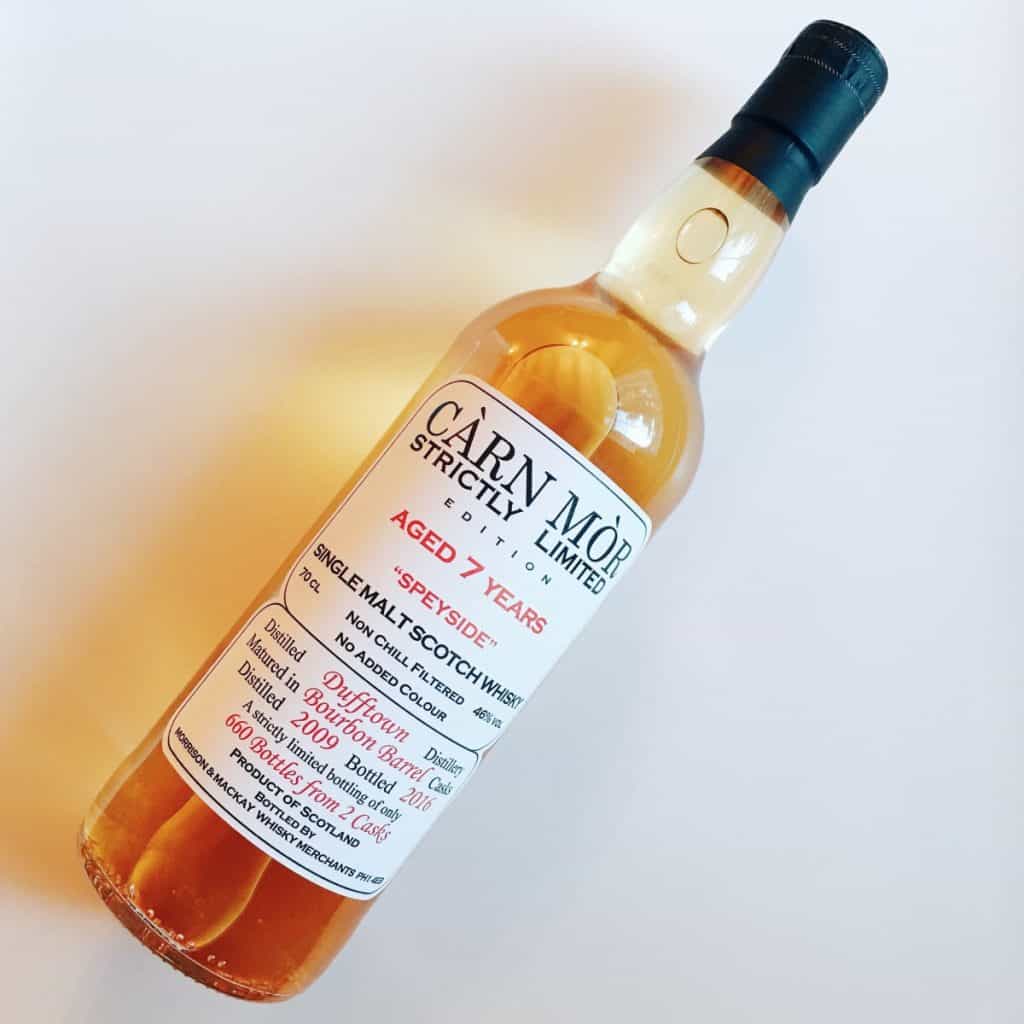 Colour: yellow gold, but rather cloudy. They can’t be accused of chill-filtration!

On the nose: that slight petrol whiff combined with lime, pineapple and floral intro does bring to mind Riesling. (I don’t know if I’m projecting that onto the whisky, but it is different.) The fruitiness is very nice and manages to subdue the dusty malted barley, hay barns, grassiness and ever so slightly industrial notes. Back up to gooseberries and apple pie. Unusual stuff.

In the mouth: an intense, stone-like minerality (if you’ve ever put a piece of slate into your mouth), and some dirty Dufftown industrial notes, metallic and solvent-like combined with rough huskiness and barley. Dried hops. Apple pies. Pineapple and gooseberries again, with tonic water. Cider that’s been left out in the sun.

A bit rough, not especially complex, but this is still interesting. I’m glad I bought a bottle to see what it was like, though now my curiosity has been piqued, I’m not really sure I want to drink the whole lot. I might palm off a few samples to friends to see what they make of it.