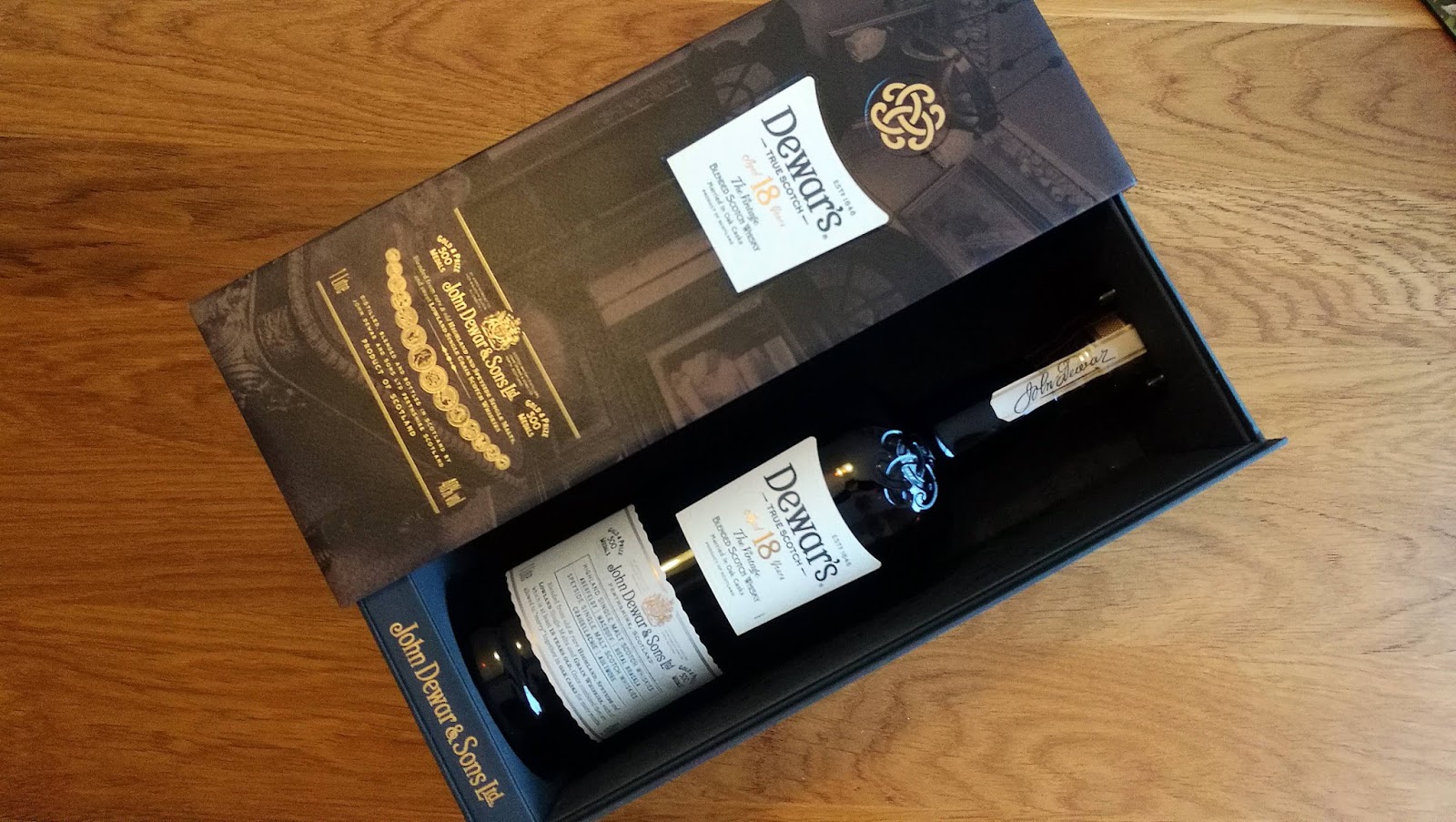 Truth be told I was a little confused about the title of this review. Cast in stone was the Dewar’s aspect and the age statement but beyond that how many phrases are on this box? Is it the vintage or a true Scotch (whatever that is) or just a plain old blended Scotch whisky. Answers on an email as I’ve played it safe for now.

This was a travel retail bargain following my December jaunt to Vegas. Waiting in the airport for the flight I wandered over to the whisky section not expecting that much in terms of worthwhile purchases. Ignoring the Octomore and Bruichladdich and even a discounted Macallan of all things, this left the candidate we have here. The suggested price was $99 for a litre bottle in this substantial packaging, but for travellers you could have it for around £50 in proper money. Bargain.

I’ve talked a little previously about Dewar’s and the distilleries that make up this popular blended Scotch whilst reviewing the Aberfeldy 12 year old. Barcardi the current owners acquired the Dewar’s blend and all the distilleries named on the bottle as part of a massive purchase. I have to say its a nice touch to have the distilleries listed on the bottle that go towards making up this blend. Then about 2 years ago Bacardi put a much needed spotlight on these acquired distilleries as single malts in their own right. As I write this we seem to be in the midst of the whole range generally being discounted, which addresses the criticism of pricing levelled upon it. That and also some freebies with certain purchases such as a free glass or Quaich.

The Dewar’s range itself was the focus of a rebrand in 2015 and this 18 year old received a facelift for a new generation. I quite like the packaging which is beyond what you’d expect for a blended Scotch in this price range despite the difficulty in opening the box. The litre bottle is impressive even when adorned with the various phrases and marketing buzzwords. All of these revamped Barcardi bottlings have been visually appealing and tactile with the whisky (so far) being of a decent quality. The only thing that has let the whole Last Great Malts range down and perhaps this is also applicable to the Dewar’s blends as well is the pricing.

The whisky market is so competitive nowadays that few brand loyalties persist and many consumers are driven by pricing, discounts or special deals. When you start advancing into the age statement ranges and trying to launch what might be a new distillery name to consumers then you have to engage their interest. Aberfeldy and its brethren have been around for decades if not hundreds of years but if the price oversteps the mark, the consumer will move on. 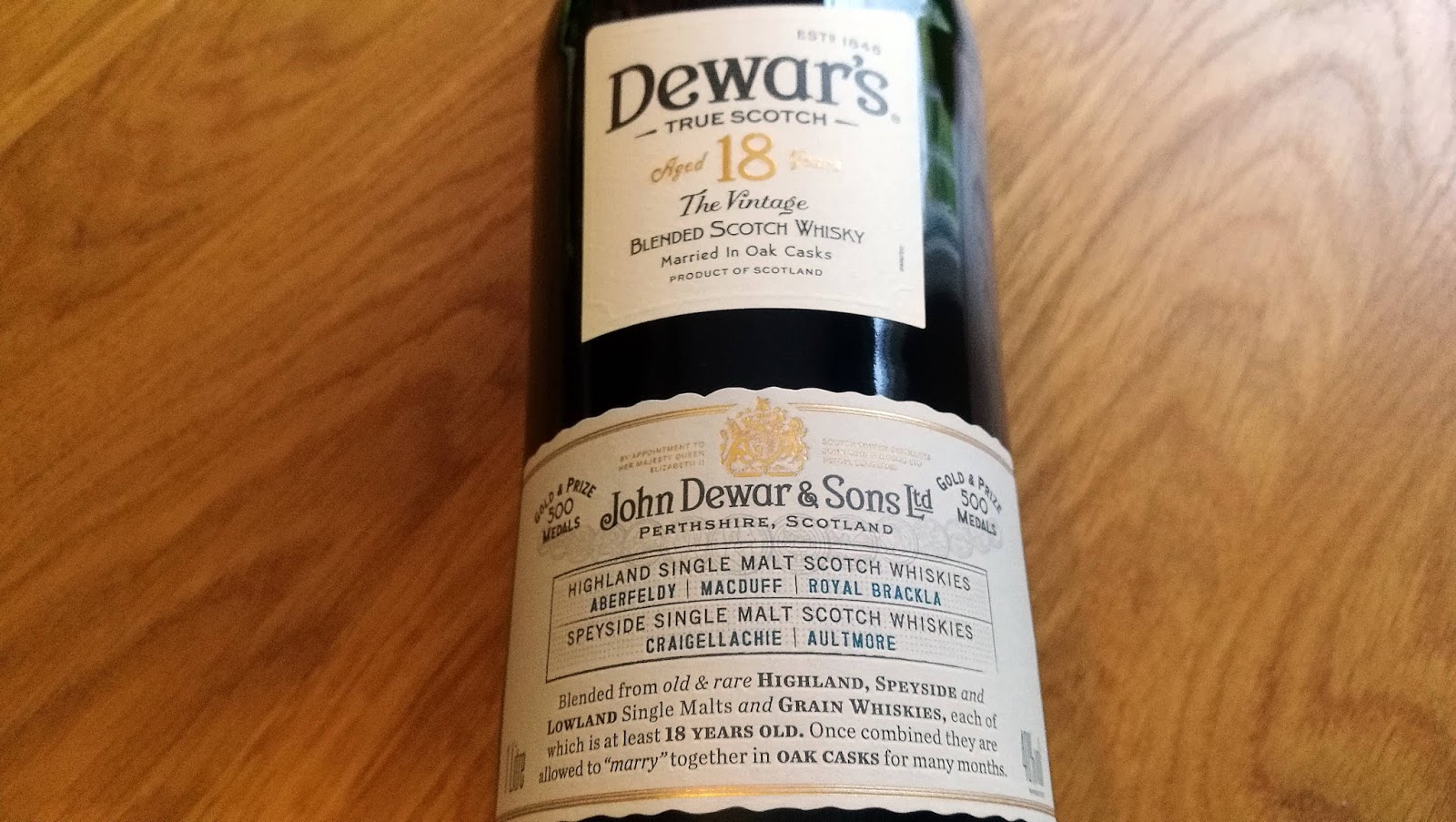 Currently in the UK we have access to the Dewar’s Founders Reserve which his different bottle styling to what we have here. As a blend Dewar’s has received more awards than any other so there is a certain confidence and bravado underlined by the packaging. This export style bottling was designed by Stranger & Stranger who have also handled Jack Daniel’s and Aberfeldy in recent times. As impressive as it is, the whole concept rests upon the contents so with a litre of the stuff let’s take a deep delve into its merits…

Colour: a drizzled honey
Nose: very light and engaging. A hint of orange, ginger, cinnamon,Fox’s glacier mints and honey. Water brings out the vanilla element and a buttery pastry.
Taste: a fresh citrus arrival and more of the honeyed orange with vanilla meringues and ice cream wafers. There’s a lavish buttery texture and an assortment of delicate spices such as ginger, pink peppercorns and all-spice. Water brings out rhubarb and a floral note.

Overall: it’s on the palate that the assured quality of this blend comes through. I find myself questioning whether its more a sum of its parts than the final whisky? It’s subtle in places, gentle and reassuring, but for an enthusiast like myself I demand a little more orchestra from my blended scotches. A point underlined by my recent review of a 1960’s Black & White blend. Now, don’t get me wrong, this Dewar’s 18 year old is likeable and reliable but if you want a really good time you’re going to call up someone else.