The Tormore. This should be a name that provokes memories of the grandest of distilleries and a Speyside whisky that encapsulates the region and what whisky can offer. Sadly to this day Tormore and its wares remain firmly beyond the radar of most enthusiasts.

It’s not for the want of trying with various owners since the distillery was established in 1958. Compared to many distilleries it’s actually been well supported with a range of official releases throughout the decades. You can actually appreciate some of these right here during our Tormore vertical tasting which was held on the distillery grounds. This planted the seed amongst the core group of the Tormore4 to seek out new versions and boldly go where many whisky enthusiasts have not gone before.

It was a fairly comprehensive vertical taking us from the very first official bottling right up till today’s 16 year old. Is modern whisky rubbish? Is modern whisky driven more by marketing? Questions for any roundtable discussion but on the basis of our Tormore vertical the odd one out was the current official bottling. It just didn’t sit well within the character of the distillery we had experienced.

Our quest continues to appreciate this fine distillery and that means tracking down a handful of official bottlings. Today we have one in the form of the 5 year old that was bottled from the mid-1980’s. This was released around the same time as its older 10 year brethren, which appears during the aforementioned vertical. This became referred to as the hand grenade bottling due to its shape and long neck. The same design has been used for the 5 year old and can in examples I’ve seen lead to some evaporation of the contents. Thankfully this edition is in pristine condition and was kindly repatriated by WhiskyLifeStyle who came across some Tormore’s in Holland. Thanks guys and keep ’em coming.

Tormore as you’ll soon appreciate does things its own way. The distillery itself is provocative and grand beyond belief. Already its achieved listed building status. The distillery is not normally open to the public but given we are theTormore4 Chivas the current owners showed us around with a wonderful tour and glimpse inside the cathedral of whisky. 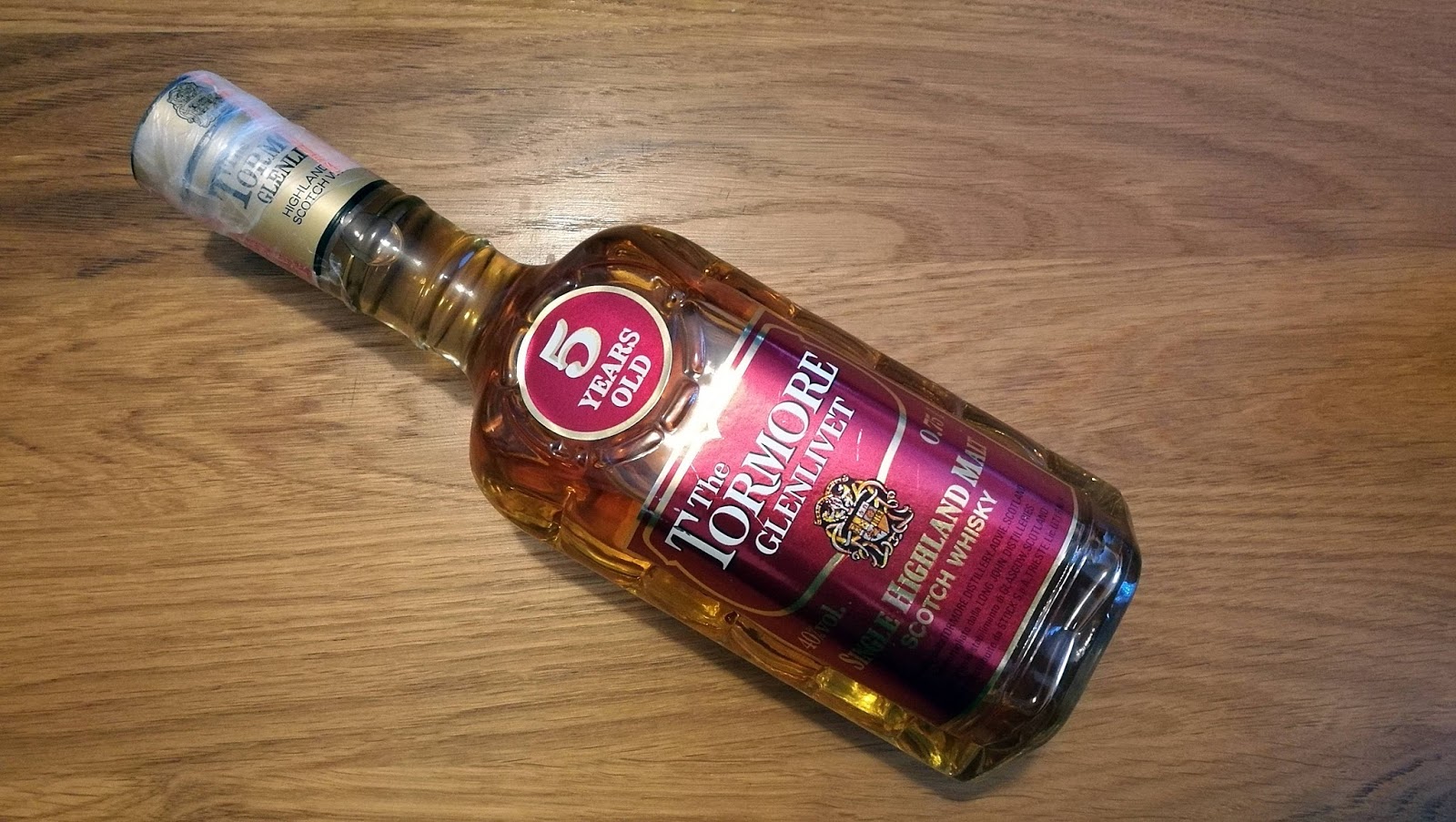 This 5 year old was bottled during the Whitbread period of ownership which wasn’t anything spectacular with the distillery producing mostly for the blended market. You can pick this bottling up at auction in its two guises on a frequent basis. From memory its the only time officially that the distillery release used the Glenlivet attachment on the label, which when you compare both isn’t required. Tormore surpasses whatever Glenlivet can muster.

This version is bottled at 43% strength with the UK edition coming in at 40%. Unlike the 10 year old which also came with cardboard tube packaging, the 5 is from my research the bottle only. Time to delve in.

Colour: olive oil
On the nose: an incredible malty arrival with a minty freshness. A floral note, then syrup with a hint of lemon and ginger. More summer flavours with honey, apricots and red apples. Water releases caramel and orange.
In the mouth: more meadows with apples and juicy pears. There’s a lovely coconut finish but it doesn’t tolerate water too well.

An engaging nose and a limited palate to some degree that reflects the youthfulness of the whisky. However given my Tormore expertise I have to say I actually prefer this 5 year old over its older 10-year-old sibling. Both are kept in eye catching bottles but this youthful fella ticks most of my boxes for an easy Speysider.