I read a very interesting article in the FFT, Ireland’s Food Service Platform. The article explored the staggering numbers of Irish whiskey brands in existence selling aged stock – say, 10 years old, like this one I have in front of me. However, because of the oligopolistic nature of the Irish whiskey industry at the moment, there are just a handful of distilleries that actually possess whiskey of that age. In a decade things will be very different.

The article summarised this phenomenon neatly: “… any Irish whiskey you see on the shelf will be spirit acquired from Midleton Distillery, old Cooley Distillery stock (now owned by Suntory/Jim Beam) or old Bushmills stock (which was sold off after Diageo surprisingly sold Bushmills to tequila giant Jose Cuervo)”.

I’ve mentioned this before when I’ve looked at some recent Irish whiskeys, and I’m still surprised that not many online commentators want to talk about it. There are plenty of distilleries in Ireland, but they’re works-in-progress and don’t yet have aged stocks. One day they will, and that will be good. What we see now is a blossoming of whiskey brands selling spirit that – more often than not – just comes from Cooley distillery, until those distilleries themselves have whiskey that’s old enough. There’s no reference to Cooley anywhere on these bottles. One can’t really imagine the Scotch Whisky Association permitting this situation across the water, although that said you do see supermarkets selling their own-label whiskies, Ben Bracken and the likes, giving the illusion that these products come from a real distillery of that name.

It does make things rather difficult for drinkers who want to pursue provenance. What are they drinking and what are its origins? What we have is a quasi-independent bottling scene. Well, it’s more than that, as new distilleries are selling whiskey made elsewhere under their own brand name. The lines of blender, bottler and distiller are blurred. And it reminds me very much of the MGP situation in the US, though I believe by law any bottlers must now reference the fact that the whisky was made elsewhere. (American readers, feel free to correct me on this.)

Does this really matter? That’s your call.

As I say, this is an industry wide topic – and I like to ensure questions are being asked of the industry.

But let’s focus on the new whiskey itself that sparked this line of thought. The Dublin Liberties Copper Alley Irish Whiskey is a 10 year old single malt that, after maturation in ex-bourbon casks, has been finished in a rather Dalmore-esque manner – 30 year old Oloroso Sherry Casks for six months. It’s named after Copper Alley, one of the oldest streets in Dublin. Now, Dublin Liberties Distillery does exist at Old Mill Street, but it has only just been founded, and it looks like they’re assembling a fine team to great a fine brand. I’m inferring from what the press material says that this whiskey has been blended on the new premises. Copper Alley whiskey is bottled at very respectable 46% ABV, and costs £65 from Harvey Nichols of all places. 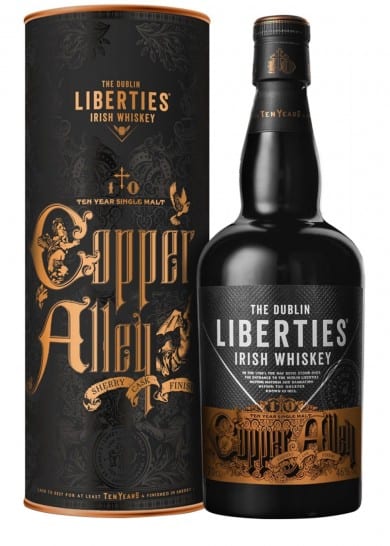 On the nose: a lot of wine notes. Milk chocolate, hazelnut praline, a little bit of orange juice, grapefruits. Once that passes there’s sultanas and dried apricots. Some fresher fruits in there: strawberries, perhaps, with plenty of vanilla (in the modern way).

In the mouth: much better than the nose suggested. Really quite flavourful and well-balanced. Tons of honey, orange, apricots and sultanas, and plenty of vanilla. The chocolate and praline notes do follow, but it’s lingering mainly in fruity territory. Again quite wine-like, and a slight strawberry-laced aftertaste of a decent rosé perhaps.

Very easy-drinking stuff: light, elegant, not massively complex but then again I don’t suppose this has to be. In short, it’s a decent whiskey – both very Irish yet with a touch more grit than average. Good to have on the shelf. Touch on the pricey side perhaps? Anyway, for a 10 year old whiskey there’s plenty to like here. The chaps at The Dublin Liberties Distillery can be duly proud of what they have made.

Note: this was based on a sample kindly sent to me on behalf of The Dublin Liberties Distillery.