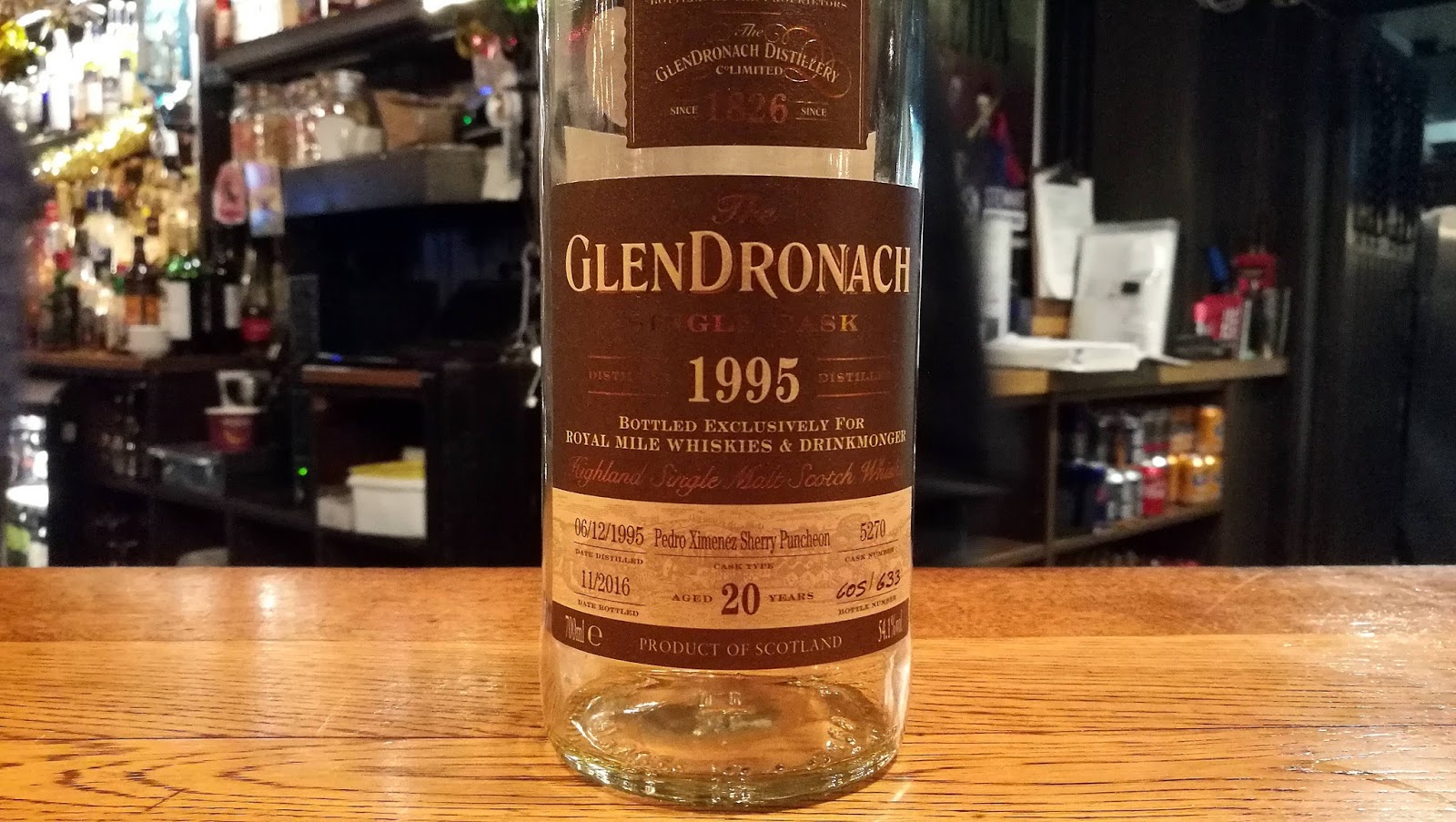 Ah GlenDronach, you can feel the love oozing out from some quarters can’t you? Yet from these dark recesses of sherry-ville, I also feel a disturbance amongst the bourgeoisie. Since the distillery was acquired as part of – let’s face it – the absolutely massive price paid by Brown-Forman also comprising of BenRiach and Glenglassaugh. Rumblings from the whisky jungle drums have reverberated with speculation and fear.

Whisky enthusiasts who have been in the game for a while will often highlight that it’s all part of the enjoyment. Distilleries will come and go, as will owners and particular bottlings. The strong will survive and the weak will be destined for coach tours till the end of time, and Jura will be exactly that. Yet given this composed outlook many have a tear in their eye when the topic of GlenDronach slips out from the shadows.

As I write this piece the current news about GlenDronach is that there is no news. Representatives from Brown-Forman are no doubt well into their due diligence and taking note of their stock and inventory. Some bottlings may have been put on a delayed order for retailers whilst a plan for the long term is formulated. It would be easy to engage in speculation. Yes, some age statements may slip as the American company has enjoyed great success in the supermarket realm through their Jack Daniels approach. To reach into this market and achieve the desired levels of success, it is entirely foreseeable that a new range is created and one that is more palatable to new drinkers at an affordable price point.

Much speculation has been around the annual releases with the recent outturn prompting a stampede in the UK, but arguably not across Europe where stocks are easier to acquire such as in Italy. It could be the case yes, that these special single casks releases are coming to an end, or take on a new form. What I would expect going forward that the single cask releases for any retailer that asked for one, may also become more limited until investment at the distillery has resulted in an increased level of warehouse stock.

Visiting GlenDronach in 2016 as part of the Spirit of Speyside festival, it was clear from talking to the staff regarding the recent takeover announcement that many were looking forward to GlenDronach seizing this investment opportunity. Exploring the site, it was noticeable that it is a wonderful time capsule and a faithful producer of quality whisky, but it could do with a cash injection. This seemed to be the consensus of our group and our conversations, as GlenDronach seeks to find more worldwide appeal in the marketplace. So the moto is buy and enjoy while you can if you dabble in the fear stories.

Distilled on 6th December 1995, 20-year-old GlenDronach was a sample from a recent Jolly Toper tasting where I departed towards the end and kept for another day. It is exclusive to Royal Mile Whiskies based in Edinburgh and was entirely matured in a Pedro Ximenez puncheon (#5270) resulting in an outturn of 633 bottles priced at £124.95 at 54.1% strength and it’s still available online from their new flashy website here.

Colour: brushed bronze
Nose: a handful of raisins, maple syrup sweetness, honeycomb with a hint of treacle. A sprinkling of cinnamon, dried oranges and a drying vanilla influence from the wood. Ginger, toffee and those fig roll biscuits from my younger days. It’s quite succinct in places lacking that boldness many prefer.
Taste:  a prolonged arrival and decent peppery finish but it lacks that middle or body somewhat. Marvellous mix of chocolate and resin initially, redcurrants and blackberries. Golden syrup and caramel follows with crushed nuts.

Overall: a perfectly pleasant GlenDronach and an approachable example lacking the harsh boldness you sometimes experience with single cask bottlings from this distillery. Whether it’s worth £125 of your hard earned pounds is really your decision; I’d save a few bob and purchase something else that offers better value for money.