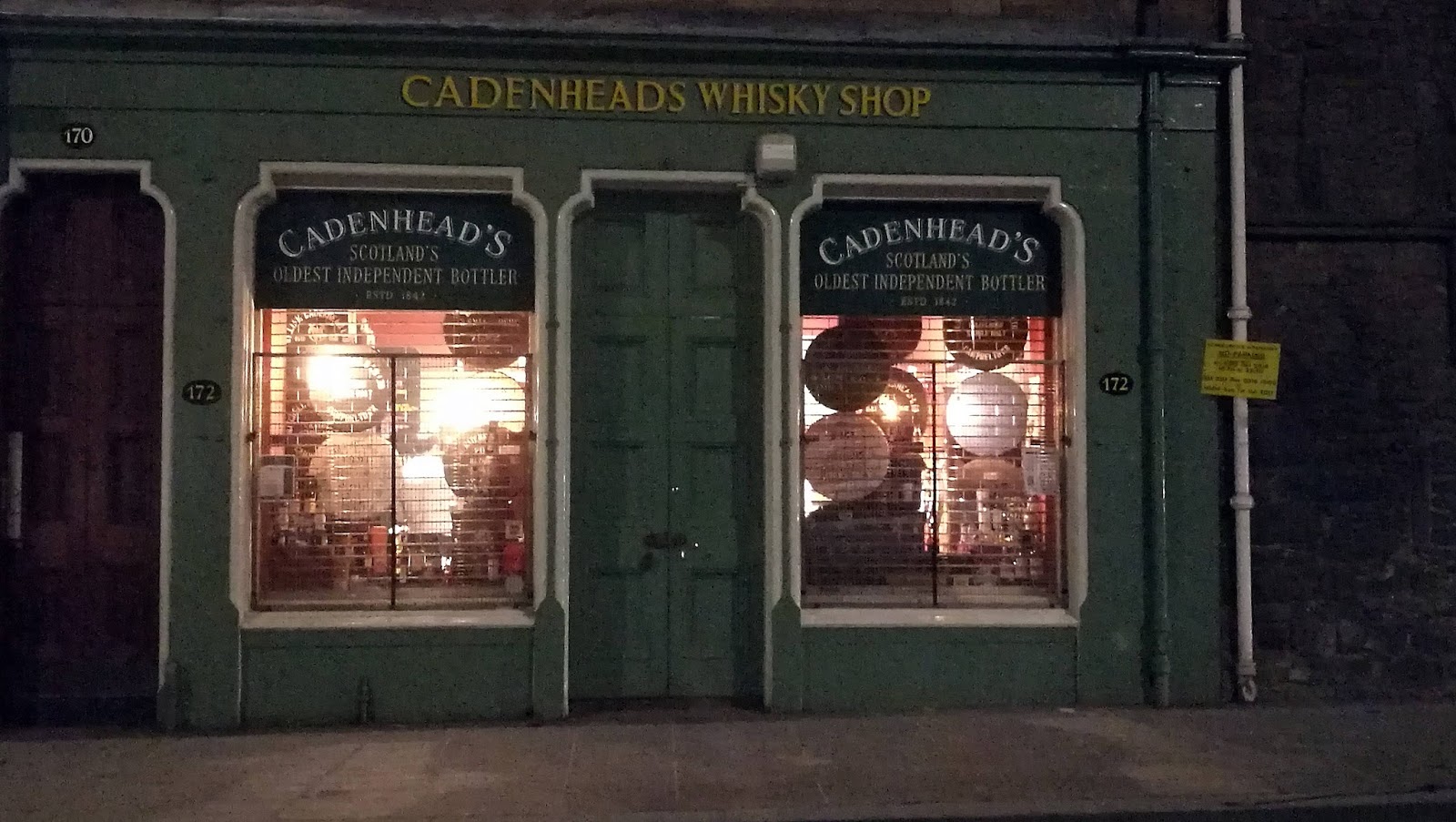 Following the prolonged excesses of the festive period, the whisky world slows down a revolution until the arrival of 25th January. This heralds Burns supper territory and in Scotland prompts a shaking off of the winter blues thanks to a fine meal and a revitalising dram of whisky, or more likely whiskies. The poems of Rabbie Burns for many are an afterthought when faced with the haggis, neepes and tatties.

My week around the main day itself tends to fill up with possibilities rapidly. The consistent work event that colleagues try and persuade me to attend each year without success; it’s just a handful of bog standard whiskies. The various tastings that crop up and whisky-themed events in Fife and Edinburgh. There are plenty of choices and I’m fortunate to be faced with such a vast range of options.

The decision this year was straightforward when my favourite whisky retailer in the capital announced an event to be held on Friday 27th January; thereby avoiding clash with the traditional serving of haggis at home complete with my infamous whisky sauce. The Cadenheads shop set on Edinburgh’s Canongate is an institution to local whisky enthusiasts and visitors from across the globe. A visit to the capital isn’t complete if you haven’t ventured into this perfectly formed whisky outpost.

In 2017, Cadenheads is celebrating their 175th anniversary with various events to commentate this landmark date along with a spectacular array of monthly bottlings. The year ahead is starting to seem pretty expensive even with Cadenheads’ affordable prices just because they put out so much good whisky. The shop itself is small but perfectly formed; offering the atmosphere that many whisky retailers try to replicate but fail to capture. Such is its size that for their celebratory Burns tasting just 12 tickets were available. Priced at £35 per person, this included 7 drams along with Burns themed nibbles with several coming from the recent 16th International Small Batch release. The whiskies were all cask strength and many had linkages to the life of Rabbie, whether it was his place of work or where he once lived. Also included were a couple of specially bottled whiskies just for this event from the formidable inventory of Cadenheads

On paper the evening offered a grain whisky from Ayrshire, a recent Aberfeldy 19-year-old from Cadenheads; a distillery I’ve appreciated with the official 18-year-old being particular excellent. Then an array of sherry cask whiskies including I expect a dirty Glen Scotia, a rarely seen independent release from Blair Atholl and something from Arran, which is not one of my favourite distilleries despite the hype. Then rounding off the evening was the promise of a 22-year-old closed distillery bottling from a Speyside distillery that would be revealed on the night and a mystery 1990 Dumfries bottling. The prospect of a series of excellent whiskies set in my favourite shop accompanied by food and fine company who could refuse? 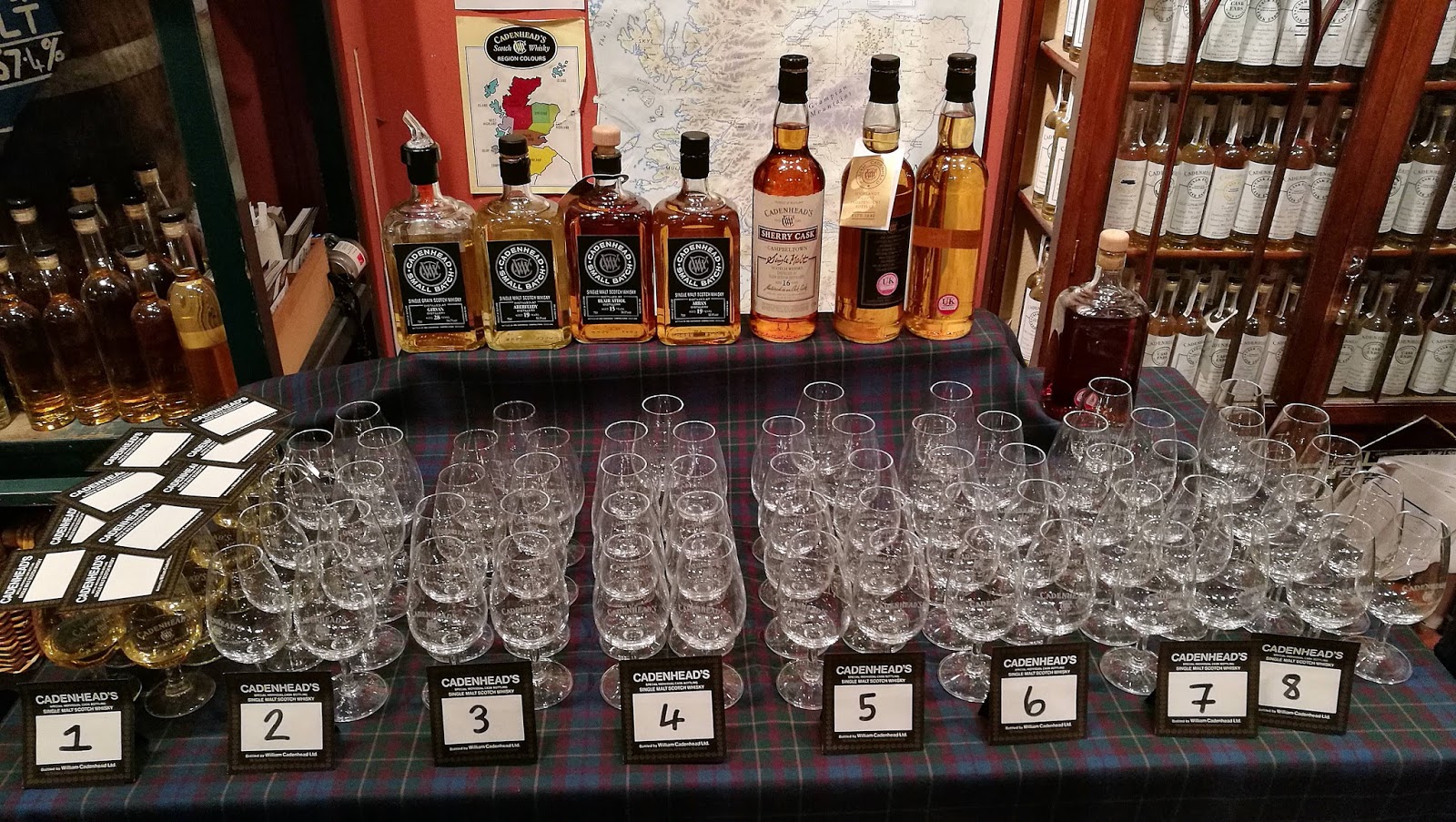 Girvan 28 years old
Bottled at 51.3% from a single ex-bourbon hogshead resulting in 228 bottles
Expect to pay around £103

Colour: saline
Nose: a very fresh arrival with white grapes, icing sugar, almonds and a little marzipan. A hint of mint cuts through the initial aromas, a little pine resin, coconut milk and pot pourri.
Taste: a very delicate arrival even at this age with wine gums, a twist of lime, white wine vinegar, green apples and pears.

Overall: a gentle opener, I’m not a huge fan of Girvan grains as I find them lacking ultimately being far too neutral. Whereas North British offers a little more substance. Still, if you’re a fan and enjoy light, floral grain whiskies this will be one for you.

Aberfeldy 19 years old
Bottled at 55%, a vatting of 2 ex-bourbon hogsheads, resulting in an outturn of 528 bottles
Expect to pay around £67

Overall: I quite like this Aberfeldy, its gentle and very approachable. Yes, it lacks the additional colouring of the official range and those dominant honey notes, but is a whisky all can appreciate.

Blair Athol 15 years old
Bottled at 54.6% from a sherry cask, this was originally an exclusive bottling for Taiwan.

Colour: weetabix
Nose: orange pips and some earthiness followed by coconut and plums. It’s a juicy nose full of fruit characteristics supported by dark chocolate and a twist of lime. Some new tupperware aromas and shortbread finish it off.
Taste: oh yes what a delivery. Big handfuls of vanilla cream sprayed with orange zest. I find it rather revitalising. A gentle assortment of spices with cloves, cinnamon and all-spice tingling the taste buds. A waft of tobacco and crushed walnuts has me reaching for another, if there was one.

Overall: I hesitated with this bottling towards the end of 2016 and the 5 bottles flew off the shelf. Fortunately the team kept a bottle aside for this tasting. Fact, I’ll be visiting Blair Atholl in the near future so expect a distillery bottle to appear here sometime soon.

Arran 19 years old
Bottled at 52.4% from a vatting of a sherry cask hogshead and an ex-bourbon hogshead
Expect to pay around £69

Colour: apple juice
Nose: cream initially, then the oranges kick in becoming almost Turkish Delight in places, with a floral nature. Juicy pears are evident alongside melted butter.
Taste: gentle arrival with oranges, which moves into vanilla and the char from the cask. The oranges return, with caramel, sherbet and chocolate before moving into a sweeping peppery finish.

Overall: it’s a solid whisky, which for an Arran coming from me is a big compliment. The sherry component certainly lifts this one up but remains balanced. A very easy drinker, it should find favour with Arran enthusiasts yet I remain on the fence. 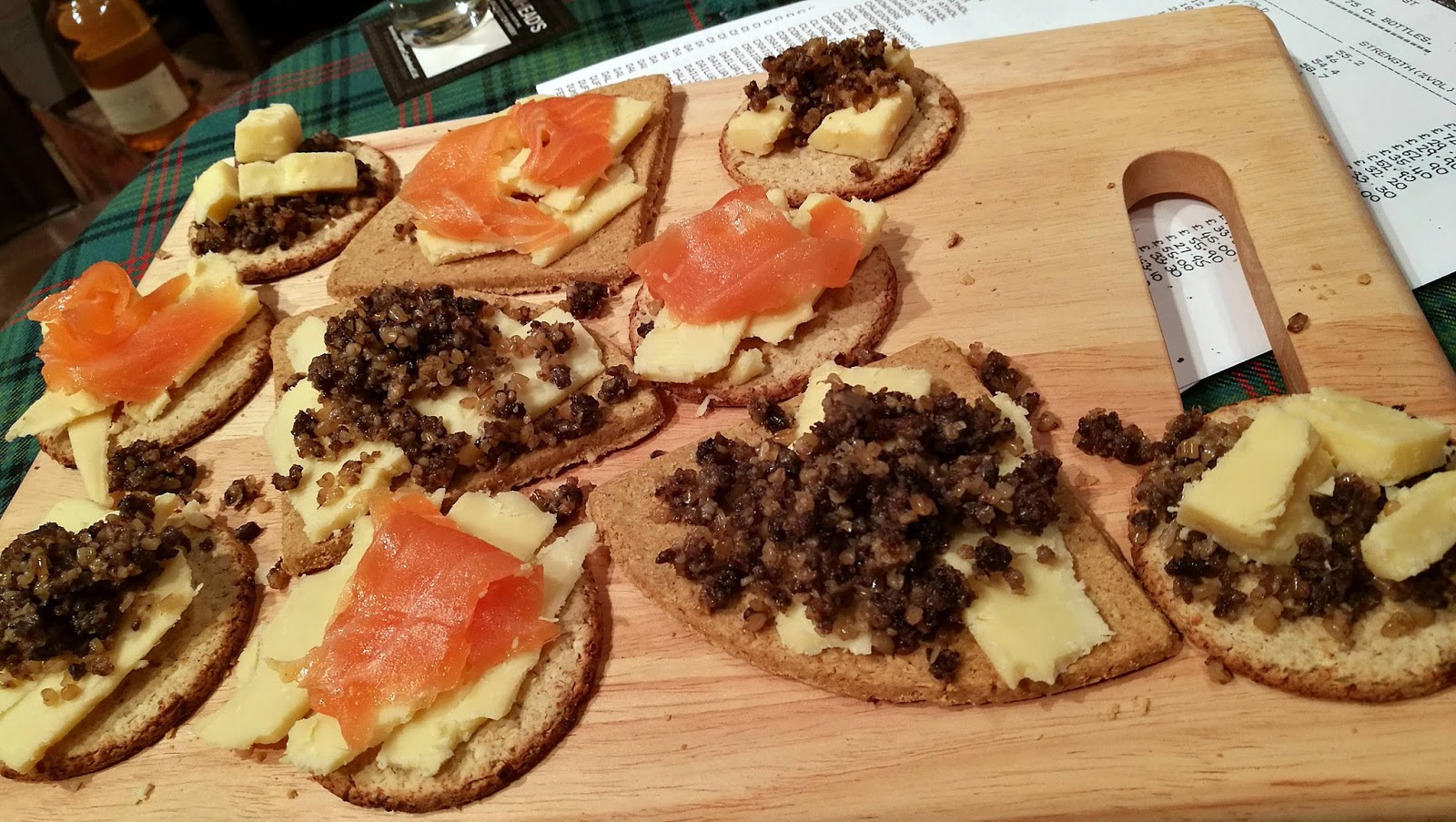 Glen Scotia 16 years old
Bottled at 57.8% from a sherry butt resulting in an outturn of 612 bottles
Expect to pay around £67

Overall: a full maturation sherry butt from Glen Scotia. Yes, it’s a dirty slag. This whisky isn’t for everyone and from a tale on the evening, a grandfather would prefer to drink from the local Loch than anything from this distillery. It’s a Trump-malt, divisive, polarising and I love it. Hence on the night this was my purchase thanks to the generosity of fellow enthusiasts stepping aside so I could acquire the last bottle in the shop.

Colour: apple juice
Nose: it arrives like a cart full of apples seasoned in pepper. Toffee, lime, almost a gentle peppermint tea in some places with honey. It’s a concentrated, focused nose.
Taste: more apples but stewed, a herbal influence basil or thyme is a close run thing. A light caramel then vanilla custard towards the end, its quite a subtle whisky, caressing in places the spirit clearly in harmony with the wood.

Overall: I know this whisky having bought a bottle in 2015 when it was released for £140. I find Caperdonich quite peppery at times but this one is more refined and gentle. Very much a whisky from a bygone age.

A Mystery 1990 Dumfries Whisky
Specially selected by Mark Watt for this tasting, its a Bladnoch not yet released by Cadenheads
Currently 26-years-old from cask 4631

Colour: a dulled syrup
Nose: that fruity lowland assault with apples, white grapes and pears, some ginger thrown in as well and lychees. Vanilla is the backbone but more integrated like Custard Creams and golden syrup.
Taste: a very assured whisky, more of those fruity aspects and just the most inspiring finish that refuses to wither. Wine gums, pineapple, castor sugar and a peppermint freshness with a resin zing.

Overall: I’ve always had a soft spot for Bladnoch especially their sherry casks, but those days are gone while we witness the rebirth of the distillery. This cask predates the previous ownership and has a wonderful fresh and vibrate quality. I’ll be watching out for this when it arrives in an outturn.

Colour: cherry wood
Nose: an assortment of charcoal, cherries, vanilla and dark chocolate. Ginger biscuits, tobacco, a hint of diesel with bronzed rubbing.
Taste: it’s the spices that draw you in with cinnamon and all-spice. Then the array of sherry flavours with leather, raisins, chocolate and maple syrup. The diesel influence resurrects towards an epic finish.

Overall: this bottling was originally part of the warehouse tasting before being made available during last year’s festival. Needless to say it was very popular and offers that thoroughbred experience that can only come from Springbank. This was another mystery whisky that received universal praise from the table and I was fortunate enough to guess the distillery with those diesel notes (that’s what I call ’em, but others may suggest something else) giving it away.

I think I can safely say everyone had a great evening in the shop with the whiskies on offer and conversing at the table. The live music was a real highlight, which went down well on Instagram Live as well. Sadly there was no lock in with all those shelves full of Cadenhead goodness; maybe next time?

Given the monthly onslaught of Cadenhead releases throughout 2017, I thought it somewhat necessary to enhance the financial overkill by attending the second of the..