Another Bowmore review? Yes indeed, the quest continues for the quality we once associated with this distillery. It has been a difficult challenge to date uncovering various disappointments including recently the Bowmore Small Batch Bourbon Matured.
There’s nothing wrong with aiming high and for long periods of its existence Bowmore has been one of the leading distilleries in Scotland. In recent times things have gone wonky for Bowmore and to this day it does remain a mystery as to why? The problem first presented itself in the 1980’s when unpleasant characteristics with their whisky were noted. This certainly continued into the 1990’s where soapy qualities were present in bottlings such as this 12-year-old Bowmore. Somewhere internally as part of the distillation process, something had changed for the worst.
This tainted stock for a period was an issue as the distillery had to use it up and arguably may still exist in one of its warehouses. In 1994 the distillery was taken over by Suntory and great things were anticipated. The curve since has been positive and upward, but I doubt I’m alone in stating that I would have expected much more from this distillery. Especially after 20 plus years, whisky greatness still illudes this Islay icon.
One barrier has been a recent focus on No Age Statement whiskies that are often driven by wood emphasis and feel forced. These lack the fruity qualities of the great Bowmore’s of the past and an overall sense of quality. I’m the eternal optimist and the latest Bowmore to be judged at Whisky Rover is this 15-year-old. Called Darkest this brings back memories of the Bowmore Black Rock. This in my review felt overpowered by artificial colouring and was indicative of how Bowmore was struggling to re-establish its identity to a new generation of whisky enthusiasts. 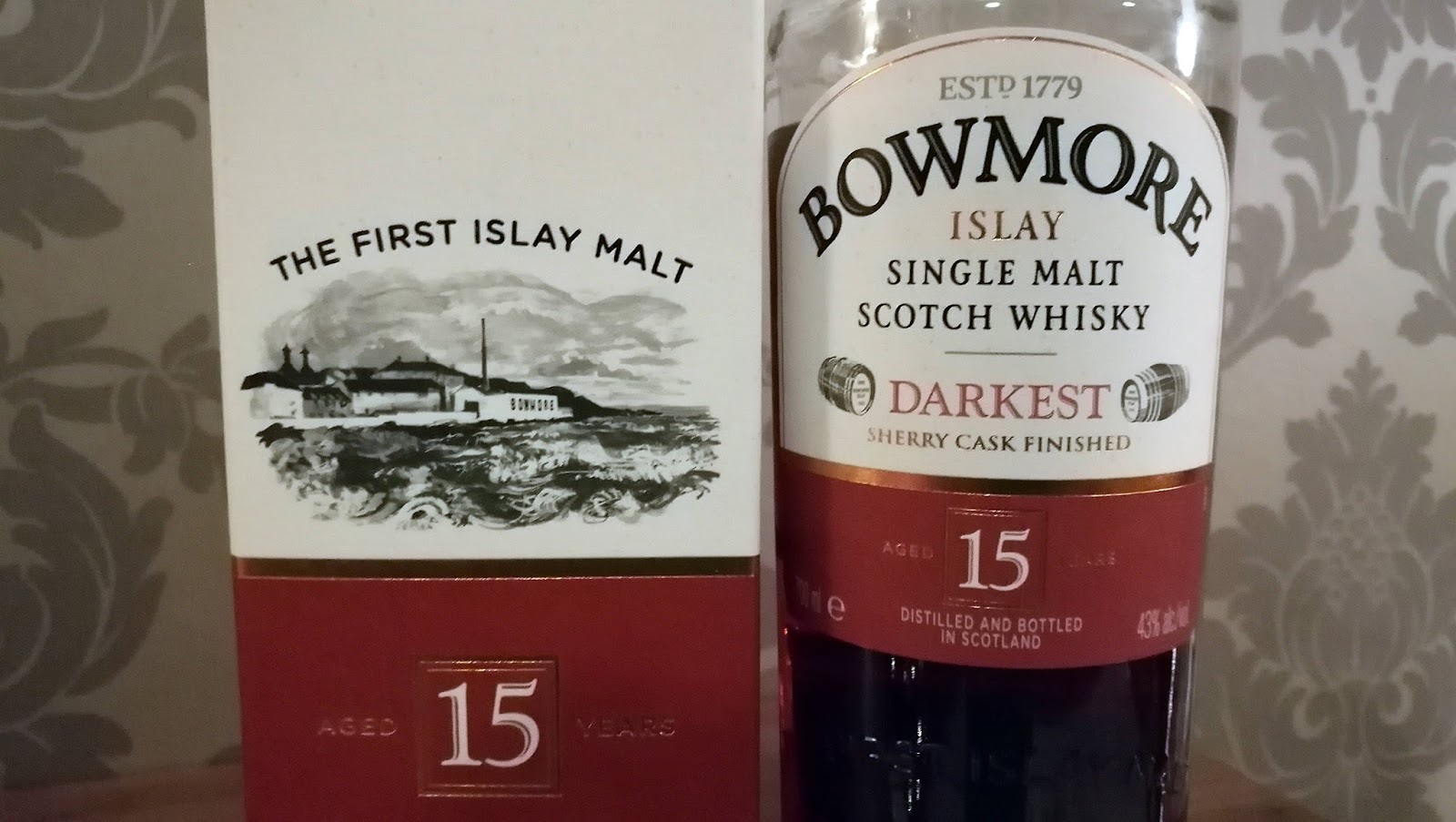 Darkest has a 15 year age statement and is essentially a sherry cask finish bottled at 43% strength and forms part of the core range priced around £55. For the first 12 years of its voyage, the whisky has matured in a combination of ex-bourbon and sherry casks. Before being vatted together and matured for an additional 3 years in Oloroso sherry casks. I also expect we’re dealing with some artificial colouring and chill-filtration.
Time then for another Bowmore review.

Colour: amber danger
On the nose: unsurprisingly peat more towards vegetative tined with brine, chocolate and ginger. Toffee, some pine and a hint of salt but no real depth I feel.
In the mouth: very gentle, almost soil-like with a delicate peat and a touch of bitterness. Very drying in places, honeycomb, coca cola, resin and a hint of mint. Literally evaporates quickly on the palate with a chocolate pepper finish. Water only highlights its fragile and lightweight depth.

This doesn’t really do much for me or really draws you into Islay and its whiskies. A little lacking especially given its decent teenage age statement. The price asked if you’re seeking Islay peat you’re better picking up the Ardbeg 10, the Lagavulin 16 or something from Kilchoman. For Bowmore I much prefer the recent 21 year old Whisky Broker bottling.