A fresh Glasgow morning welcomed whisky enthusiasts from across the world to the warm and plush environment of the Grand Central Hotel. The promise of The Whisky Exchange show heading north of the border for its debut in homeland of whisky prompted a welcome sell out Saturday.

For those fortunate to purchase tickets, this unlocked the possibility of experiencing a world class array of whiskies from bygone eras, distilleries and rarely opened classics; all contained within one venue. This is not your normal everyday whisky show where punters for the price of the ticket could drink themselves into oblivion. Rather this was an event for the connoisseur and true enthusiast with ample opportunity for new experiences and reflection. The ticket price of £100 included an initial salvo of £50 in tokens to spend at the various stalls, which truth be told didn’t last very long. A tasting glass was also provided; sadly not the distinctive 1920’s blenders type that formed the mainstay of the masterclass.

I’ve already covered the debate regarding the ticket pricing, measure sizing and other aspects in my previous article here. We’ll cast aside such doubts and dive straight into the event itself. I was fortunate enough to secure a ticket for the Saturday masterclass. The Sunday event hosted by Serge was also a prompt sell out and one I would have gladly attended, but perhaps next year? My cunning plan is to cover the masterclass here and then salvage another article for some of the standout whiskies I experienced via my tasting notes, followed by my thoughts on the whole experience.

The Saturday kicked off bright and early with the masterclass at 11am with Angus MacRaild and Jonny McMillan. This knowledgeable duo took us through a fine assortment of whiskies from a bygone era hence the title Old & Rare 101, offering nuggets of research and historical context. The ticket price for this event wasn’t too far off the name, coming in at £120 and as such was a bargain. Despite some marvellous whiskies in the main venue, you wouldn’t have been able to recreate this line-up nor the asking price. These formed an undeniable six historic whiskies that potentially on paper combined to be the greatest tasting so far for Whisky Rover. The samples poured were 1cl in keeping with the overall stance of the show itself. I’ve tried to summarise what I could from each of the samples and hopefully you enjoy reading about the experience. 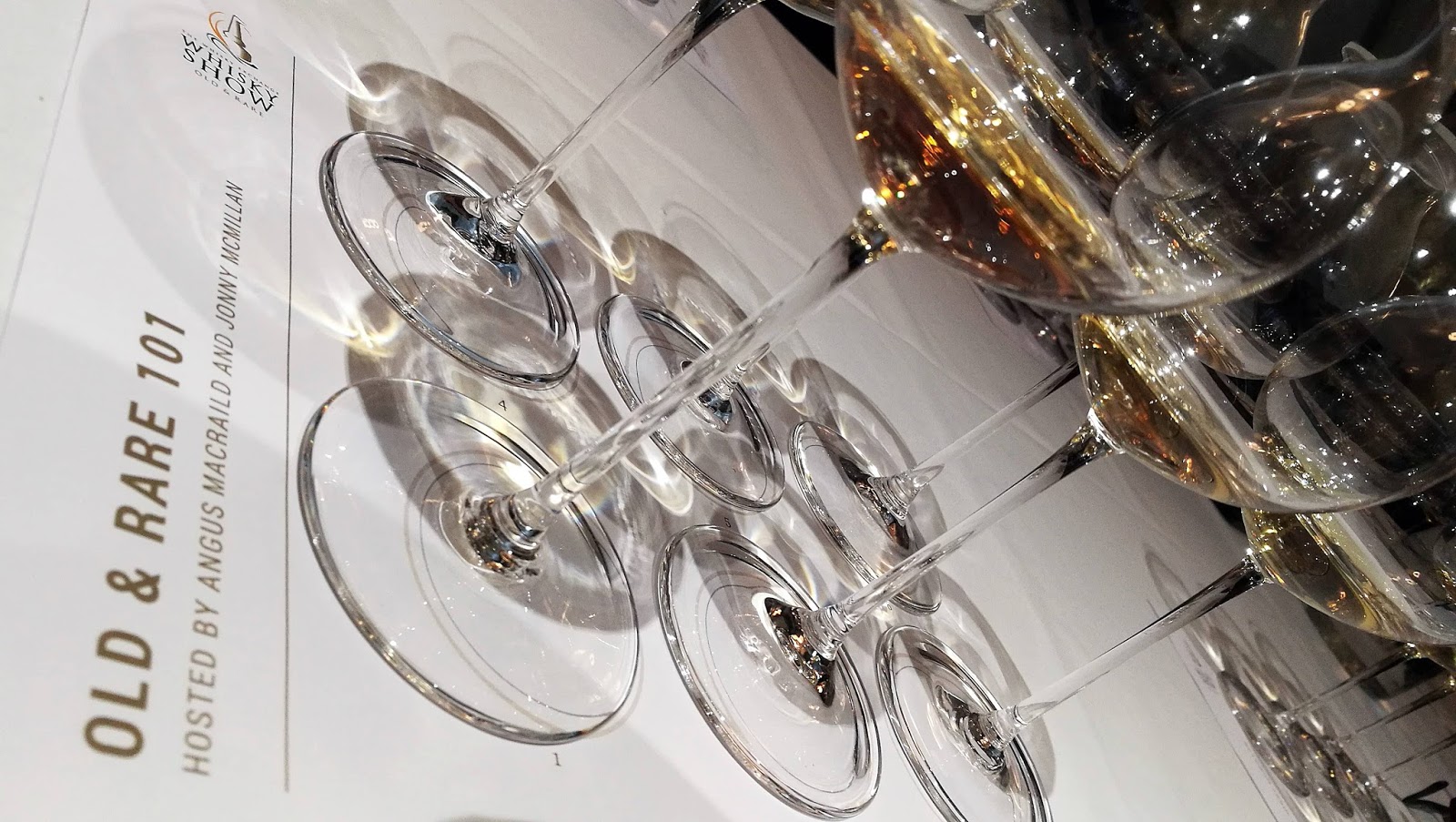 Pre-war strength (80 proof) bottled circa 1930 by Gordon Graham & Co Ltd. Bought at auction and in amazing condition having been stored upright in its original wrapping paper. Possibly the oldest Black Bottle in existence which you can read more about here.
Colour: hazelnut

On the nose: dry peat with an enforced herbal aspect. A noticeable touch of menthol amongst the earthiness. Hint of liquorice, black jacks and a very fresh arrival. A farmyard character but also some chalk, heavy malt, toffee and a touch of salt. Then spent gunpowder with some fruits arriving towards the end.

In the mouth: jeez it’s a Brora farmyard to some degree with a lovely layer of complexity. That dry crumbly peat aspect again, a dirty vanilla, pecans with toffee and a real density on the palate. Also the grain ingredient of the blend comes through on the palate but its subtle.

What struck me about this opener was how fresh and vibrant it was after 80 years in the bottle. Dating from when the Black Bottle name was owned by an Aberdeen company, its more than likely it contained whiskies from around this region many of which are now lost from 1910-1920’s. Angus felt this contained whiskies 8-12 years of age on average with some 5-year-old potentially as well. Very much a museum piece and a marvellous opening experience.

Distilled 1967 and bottled in 1981 at 45.8% strength. One of 1500 bottles from Major P.R. Reid’s Special Reserve. Angus and Jonny provided some background on the Major himself, one of the few men to escape from Colditz and how potentially he came into ownership of several casks from Glen Mhor distillery.

On the nose: very fruity with tinned peaches in syrup and a gentle herbal minty aspect. A light floral note, sawdust and caramel. There’s some chocolate and a vibrant black tea influence with a hint of bitterness followed by a meaty quality.

In the mouth: from the nose I was expecting more density however its light despite being laden with fruit. Scottish tablet verging on caramel with the sugars and eucalyptus oil followed by a vanilla char finish almost reverting back to the black tea on the nose.

Glen Mhor can be a chameleon at times to many being wildly difficult to unpick. This whisky lined you up with its aromas and then hit you with a sucker punch of the fruit elegance. A lovely example from this distillery, which is sadly no more but is still being bottled by the independents such as Cadenheads earlier this year.

Distilled 27thNovember 1967 and bottled by the First Cask range at 28 years of age and 46% strength. This is from cask number 2202 and is bottle number 82.
Colour: a golden barley
On the nose: noticeably creamy with a big dollop of fruit salad. Plenty of sweetness with honey and syrup underlined by a hint of smoke and a coastal peat.
In the mouth: gorgeous arrival with a salty coastal peat, the earthiness moves into vanilla and then tropical fruits. A phenolic aspect certainly, a touch of smoke and a noticeable drying finish. Islay in a glass at its most majestic.

A gentle Laphroaig but truly elegant. Unlike today’s examples it doesn’t need to ramp up the peat levels to cover over the cracks. This whisky from research has peat levels around 5ppm and feels more balanced, confident and layered because of it. A totally different Laphroaig to a 1940’s version I experienced recently but nevertheless as someone suggested this 1967 version is orgasmic. 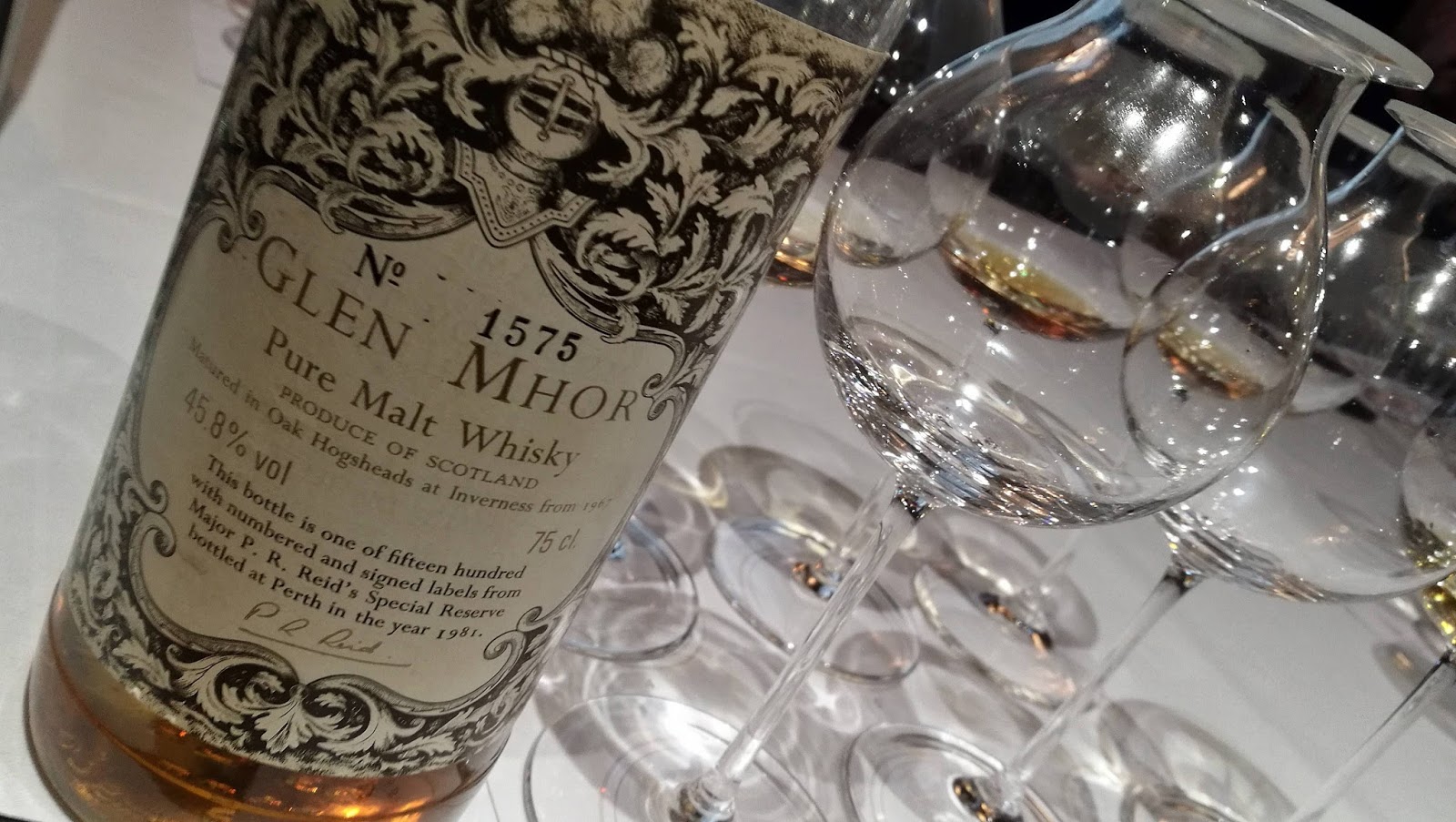 Distilled in February 1972 and bottled in July 1988 by the Scotch Malt Whisky Society to mark their 5thAnniversary. Bottled at 60.4%, an outturn of 298 bottles.
Colour: a light honey
On the nose: a huge hit of alcohol tinged with peat has some attendees retreating. Certainly water offers benefits here. Toffee and as Jonny suggested dirty pennies, or rusty nails if you prefer. A real earthy aspect verging on metallic. Somewhat chalky with syrup and toffee as well.
In the mouth: a real freshness arrives with the coastal peat and a firestorm. Those tropical Bowmore fruits exist with tinned peaches. Water enforced the fruitiness but also some treacle and mushrooms. A long kindling finish unfolded.

A bit of a bruiser this Bowmore. In some aspects I was reminded of the Sea Dragon I reviewed recently. It has that potent character and sea faring sense but also doesn’t take prisoners. In this tasting it was the most modern of the whiskies we tasted yet still detached from today’s era.

Distilled 1937 and bottled in 1959 in an ex-stone flagon which came up at auction in Scotland from an old Dundee estate. Serge has more of the details and his thoughts here if you care to discover more.
Colour: a decadent honeycomb
On the nose: some chalk initially but certainly not lime scale; this soon gives way to a creamy sugary character that had me looking for fudge at the table. Then that herbal minty aspect present in the 1967 edition, almost a pepper mint tea but more floral. No surprises for guessing more fruit, what is it about these old whiskies and the fruit? What character the barley and yeast strains provided.
In the mouth: remarkably elegant and poised after all these years. Many avoid Dundee for good reason, but this fella has thrived in such an environment. A nutty toffee quality wrapped in smoke and some seasoning. A resinous character that sinks beneath the earth and you’re left grasping at bunches of herbs.

Some old bottle or stoneware effect here? I’ve not had enough to make a comment but this Glen Mhor captivated the audience. The fellas at the Dornoch Castle Whisky Bar may have some of this on sale – it was at on their stand during the event – so you can seek it out. I’d certainly consider spending more time with this piece of liquid history. The joint winner from the masterclass group. 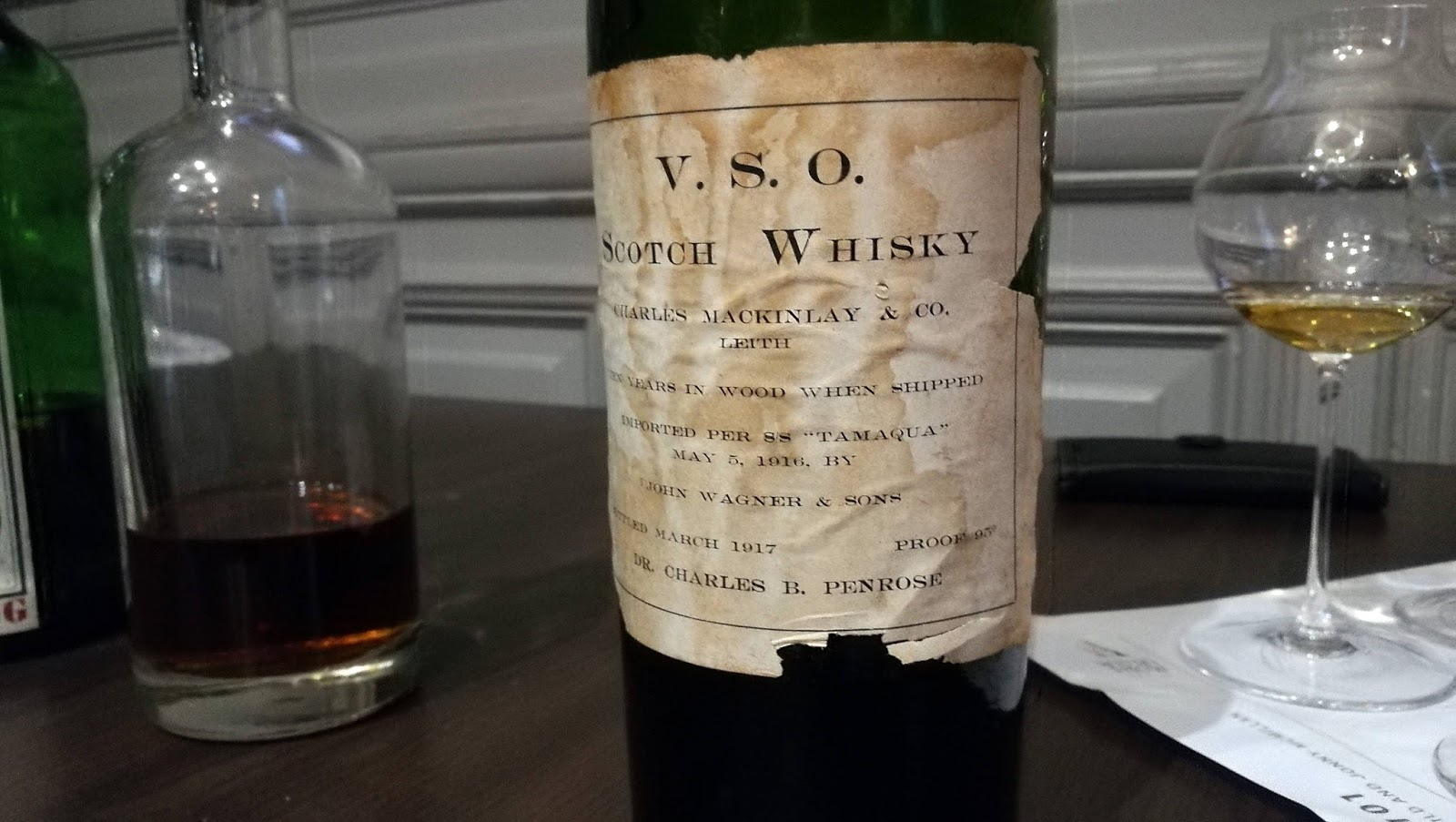 Bottled in March 1917 after being shipped across the Atlantic by the S/S Tamaqua on 5th May 1916 by John Wagner & Sons. 95 US Proof or 47.5% UK strength. You can read more about the bottle here.
Colour: a light resin
On the nose: oh man, I wasn’t expecting such a tsunami arrival; a cartload of fruit falls upon you. As you climb out from underneath, a waft of rolled tobacco assisted by a slight perfume note. There’s fudge and an intriguing clay-like aspect.
In the mouth: white grapes initially, some apples and pears as well, with creamy fudge and more of the clay character. I’m sorry but at this point I put aside my pencil and just lapped up the experience for what it was worth.

The speculation is that this features some Glen Mhor and Very Old Scotch motif was unusual at the time. The joint winner amongst the group and another marvellous example. A confident whisky with an array of flavours far beyond its mere 10 years of age. This prompted a discussion about what’s gone wrong with today’s whiskies. There is at least another bottle in existence thanks to one of my Instagram followers. I’d like to say its rubbish and I’ll take it off you for a small sum (as would many in the masterclass), but that’d be far from the truth.  Just a gorgeous, inspiring taste of a bygone era.

I’m sure I speak for all the attendees of this masterclass that we were truly privileged by the efforts of our hosts to take us on a journey through these historical and incredibly rare whiskies. In whisky terms this was the best £120 I’ve spent even when shopping for Tormore. Personally I found each of the whiskies – despite the various decades, distilleries and backgrounds – were united by their depth of character and pungency after the passing of time. The yeast and barley strains married with more traditional methods and the skill of the distillery workers unleashed layers of complexity with fruit flavours, earthy and smoky characteristics that just highlighted how detached modern day whiskies are.

Another point worth making here is that the 1cl samples were ideal measures although I wouldn’t have turned down a top up. This was assisted by the excellent conditioning of the whiskies which were still vibrant and ravishing, but also the use of the 1920’s Blender’s glass. I had considered purchasing such a glass from The Whisky Exchange over Christmas but was dissuaded by the cost of postage in all honesty. However, this hands on experience ensured my first port of call was the onsite show shop to purchase my own Blender’s glass. Delicate in nature they are tremendous amplifiers of aromas and flavours. I had myself moved on from the tradition Glencairn shape several years ago, favouring a more tulip style before discovering this new champion.

My thanks to Jonny and Angus once again for sharing these bottles with us and their efforts in bringing a memorable whisky show to Scotland, which I hope is the first of many.
55.8603581-4.2584732
CategoriesBlends Features Single Malt
Tags
Black Bottlebowmoreglen mhorlaphroaigsmwsThe Whisky ExchangeVSO Charles MacKinlay

The much maligned debut of the Whisky Show in Glasgow, or Scotland for that matter takes place later this month at the Grand Central Hotel…