The core age statements from Talisker are very fine whiskies indeed, perhaps not to everyone’s taste but I find the 10 year and the 18 year old bottlings most agreeable. Where things have gone off on a tangent in recent years has been with the series of No Age Statements from this distillery. I’ve actually lost count of how many Diageo has deployed from this corner of Scotland.

Perhaps there is something adaptable in the Talisker spirit that lends itself well to such an approach. Certainly in the Diageo stable of distilleries, I cannot think of another that has exploited enjoyed so many different releases. These have received a variety reaction from those who have sought them out. My own problem has always been the pricing of such releases that are consistently way in excess of the 10-year-old and during my Talisker vertical this was reinforced.

Independent bottlings of Talisker were almost unheard of for several years. I can recall Cadenheads sometime ago bottling an example but generally the distillery was off limits to the sector, nor was the practice of tea spooning utilised. In recent years there has been a trickle of non-official bottlings mainly from Douglas Laing and their Provenance range. This category focuses on the younger age spectrum and features distilleries bottled at 46% strength and without colouring or chill-filtration as seen in my Speyside vertical of the range last year.  Admittedly there is a premium associated with this experience with this particular bottling coming in at around £55, which pushes it back towards the realm of the Talisker NAS genre.

Talisker distillery dates back to 1830 and while Islay likes to play upon its illegal origins and avoiding the dreaded taxmen of the era. Talisker I recall from a book I once read, was something else. Due to its remote geographical location and the torturous route north, it was very much a whisky outpost almost beyond the control and influence of Westminster. Here the local distillers were very adept and making their own whiskies and once an official distillery was established by Hugh and Kenneth MacAskill, the whisky still flowed.

Talisker sits on the shores of Loch Harport, near the village of Carbost and enjoys a spectacular view across the Cuillins. It was rebuilt in the 1890’s before a fire in November 1960 destroyed the still-house. The iconic warehouse that has been converted recently to enable visitors to enjoy a dram in historic surroundings, is only a stone’s throw away from the shoreline. Perhaps it’s this coastal location that gives Talisker its salty influence and distinctive character. Thankfully when the distillery was rebuilt in 1962 the emphasis was on trying to maintain the style of whisky produced with exact replicas of the stills being created. The arrangement of a five still approach is an oddity today but harks back to the early days of the distillery when it used to engage in triple distillation, which stopped in 1928. Worm tubs are thankfully still used and these are a rarely seen feature now across Scotland’s numerous distilleries. 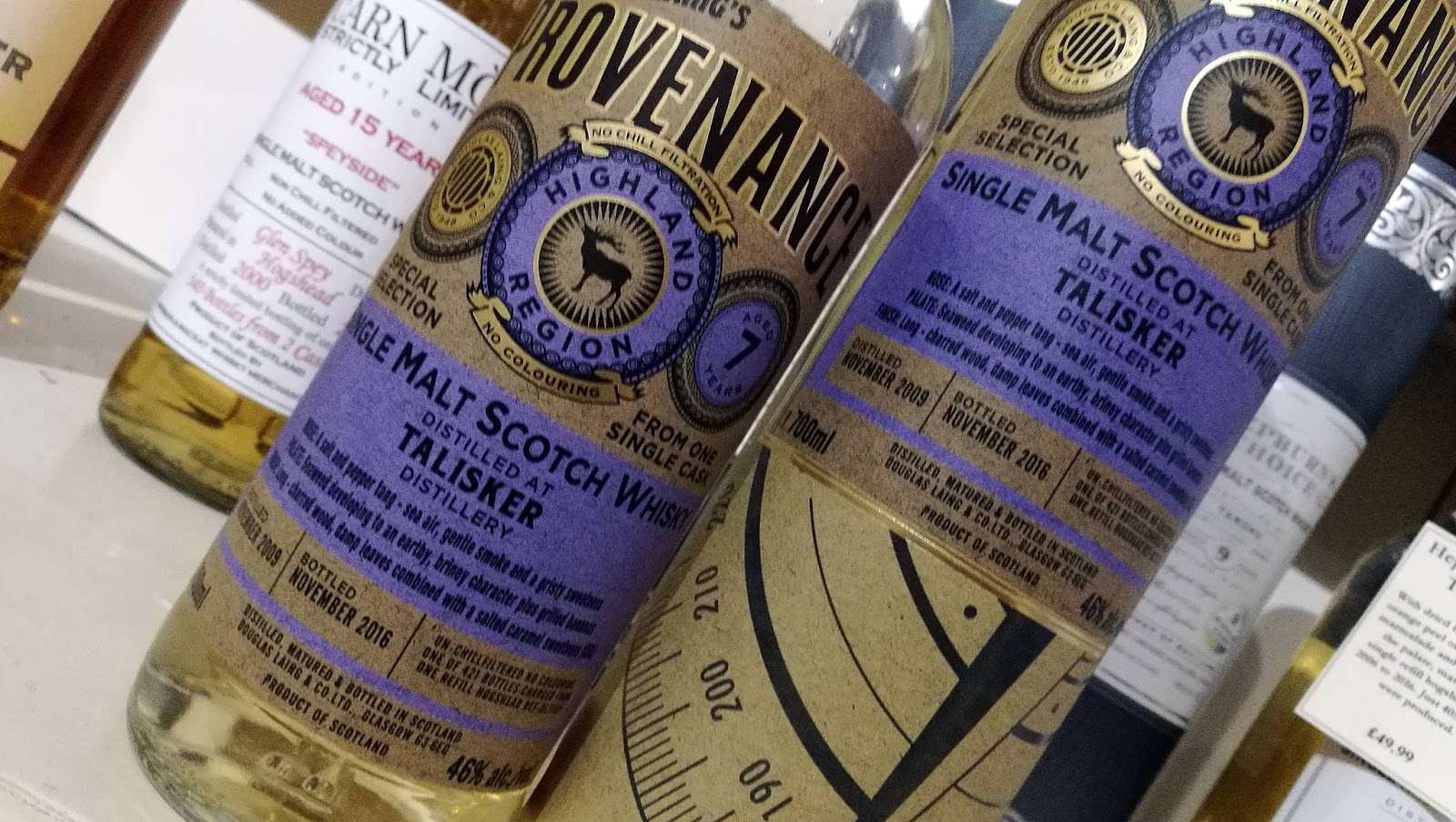 This Talisker was distilled in November 2009 before being bottled in November 2016 from a refill hogshead (11521) that produced 421 bottles. Thanks to Tomswhiskyreviews for a wee sample of this youthful Talisker. I had considered keeping it until I return to the Isle of Skye later this year and enjoying a few drams at the cottage. It’s a wonderful region to visit and full of character, great food, stunning scenery and friendly locals. Well worth the drive north, but I shall take something else to my annual residency on Skye instead, maybe one of these No Age Statement bottlings? I tend to drop by the distillery, if not the shop at least anyway.

Colour: a naked Talisker, makes you appreciate the use of colouring in the official range. A blanched almond-like vibe upon appearance.
On the nose: sea shells off the beach, sunflower oil, ginger and a malted loaf. There is an evident saltiness that makes me think of a handful of salted peanuts. Also present are green apples, cauliflower and pencil shavings.
In the mouth: incredibly salty and coastal but lacking the creaminess of say Caol Ila. This feels drier and coarser. An autumnal body with a smouldering camp fire surrounded by damp logs and spent matchsticks. There’s also a vanilla aspect as toasted marshmallows and only a short finish lets it down.

I quite enjoyed this Talisker. Yes it’s youthful but the benefit of a single cask is that its untampered with. Clearly at 7 years of age Talisker is good enough to be bottled and enjoyed.