Time for the treble and as a Raith Rovers fan this isn’t achievable in the important realm of football so we’re dealing with whisky instead. Except that I’m not a glory hunter or supporting a distant team from far far away.

The same can be said for the fashionable whisky brands and distilleries; often those wrapped up in seductive marketing or personnel. We’re expected to be led like sheep towards the lavish bottles and high profile releases often brainwashed. Therefore unable to dispute the pricing or what really makes this bottle different? I expect many bloggers have been critically infected with this ability to avoid criticising the whisky in front of them. Thank goodness for the independent bottlers who give us a wide variety of whiskies that are often at cask strength and none of that tampering Master Blenders like to engage in.

If it wasn’t for their work then whisky would be a rather dull, restrictive and overpriced reality. In fact, I’d probably be off running wild on the rum if this was the case, but thankfully companies such as Douglas Laing, Cadenheads, Gordon & MacPhail and so on, keep the whisky flame burning. This brings us back to the treble and another independent in The Whisky Broker.

It’s fair to say since its inception that the Whisky Broker has offered various single cask bottlings at remarkable affordable prices. These are natural coloured and at cask strength with no hefty chill filtration, thereby giving you the most natural product as possible in your glass. The fact that these are devoid of packaging with only the necessary details on the label keeps the costs low. This is something to consider as I tackle the latest trio of releases which including shipping cost under £200. Given that 2 of these bottles are over 20 years old, it shows that whiskies can be sold at an attractive price on both sides whilst still remaining profitable.

Let us move onto the first of the trio which comes from Ardmore so this means a little peat that has been reinforced with the maturation in an ex-Islay cask, thereby enticing us with the prospect of more coastal influence. 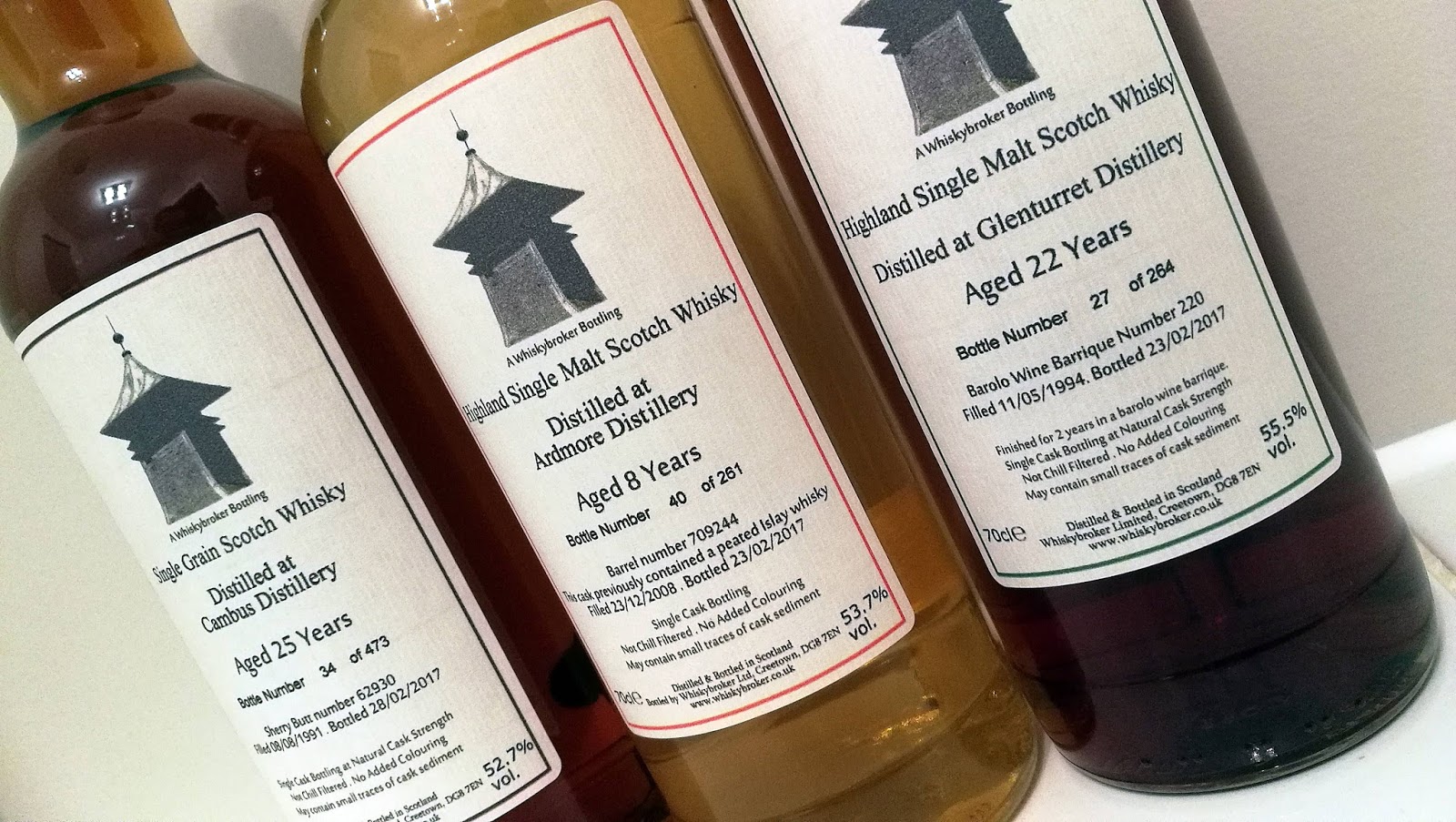 Colour: Chardonnay
On the nose: porridge oats and a rugged tweed aroma. There’s syrup and vanilla pod with subtle banana chips, sandstone, dried straw and salted peanuts. Hovis biscuits with boot polish, honey and a hint of earthiness.
In the mouth: a real peaty earthy arrival with a hefty toss of salt but its a sugary sweet peat better balanced than seen in the Ailsa Bay bottling. Sunflower oil, sandpaper, salted butter and a little thyme.

Overall: when I’m considering the whisky experience, the above journey is a huge influence, but also that of the price. As I type this of the trio is the only one to have sold out and was priced at just £30 a bottle. Given how disappointing the current range of No Age Statements are from Ardmore currently, this represents very good value indeed.

Colour: treacle
On the nose: just a lovely presentation with ginger and crushed walnuts. There’s some cherries with dark chocolate and cola cubes, noticeable cinnamon and blackcurrants. Water delivers treacle and more toffee notes.
In the mouth: resin, chocolate and cinnamon bark arrive with a little roasted coffee beans. I’m also picking up cherries and honey with a peppery finish. Water hazelnuts and Scottish strawberries.

Overall: another excellent Cambus, I really miss this old grain distillery which is no longer in production. Give me this any day over Girvan or Invergordon that produce a lighter and more neutral type of grain spirit. Priced at £55 this has since sold out but a sister cask is being bottled any day now.

Distilled on 11th May 1994 and bottled on 23rd February 2017 at 55.5%, initially it was matured in cask number #220 before being moved a Barolo wine barrique for the final 2 years of its maturation. This resulted in an outturn of 264 bottles.

Colour: cherry wood
On the nose: a very punchy arrival with raspberries and cherries. Rolled tobacco and plum jam, a real dense presentation with cinnamon and cacao.
In the mouth: initially I’m thinking soapy oh no, but it mixes into other characteristics with Turkish Delight, candied fruits, Parma Violets and cherries. Water doesn’t improve matters and I’m reminded of an early 90’s Bowmore with its perfume issues.

Overall: for me there’s something that’s gone fundamentally wrong here, whether it’s the original or second maturation cask. You rarely see Glenturret’s bottled independently and as the most expensive of the trio (price £99) I have to say it’s lagging behind the others by a country mile. This has also sold out.

So there you have it a mixed trio that I’ve shared with others. If these were still available I’d recommend the Ardmore as an everyday drinker and the Cambus as a taste of a bygone age. The Glenturret didn’t suit my palate and I’m unable to recommend it.

Ten is the magic number, or at least it is for many whiskies. Talisker comes of age as does Benromach or Glenmorangie. A decade at..