The vast range of possibilities that this whisky offered before I sat down in front of the keyboard were sizeable. Miltonduff is a rarely bottled distillery so that was one potential avenue, then there’s the history of the producer or even the bottler, in this case being Sestante. Interesting reading I’m sure, or even the art of gorgeous label design; something so rarely seen in official bottlings.

Then there’s all the changes in the whisky industry since 1966 when this 22-year-old was distilled. Subtle minor aspects all in the pursuit of efficiency and reduced costs have led us towards this bland avenue of whiskies we now see dominating the horizon. This bottle would represent a prefect introduction for all of these changes and continuing the debate. Yet the true thrust of this piece only became apparent when I started to nose and taste the whisky itself. At this stage I knew there was only one destination that was truly worthwhile.

Firstly, thought lets briefly run through Miltonduff itself, which forms one of several distilleries in the Chivas empire. Primarily a distiller for blends it can trace its history back to 1824, if not before with an assortment of illicit stills in the area. Fans of closed distilleries will immediately associate the site with Mosstowie which sparked into life in 1964 when a couple of Lomond Stills were installed; you can read a previous review of this rare whisky bottled in 1975 by Spirit of Scotland. This bottling would have been shortly after the distillery was rebuilt in 1974, before the Lomond stills were removed in 1981.

Today it’s one of the quieter distilleries in the Chivas arsenal, content to go about its own business without a single malt profile of its own. From memory, officially I can recall an Allied bottling that was fairly average and a 12-year-old expression that did little to change my opinion. It’s worth keeping an eye out for the Cask Strength expression from Chivas that they’ve introduced in recent years to highlight all of their distilleries including the magnificent Tormore. This official range asks a modest price for a satisfying experience.

Finally, we’ve reached the topic that I felt appropriate and it’s all about the wood. No, I’m not talking about solid oak furniture or some TV advert. Rather the quality of wood in today’s or the bygone era of whisky. We’re force fed the lines that wood management is key to today’s whisky and it makes up X-amount of the flavour. I think it’s realistic to state that wood has taken a stranglehold on whisky today with many varieties being dominated by a select few characteristics. Dare I say some have become almost bourbon-like with the domination of vanilla and youthful casks? Even the dangerous ground of virgin wood territory? 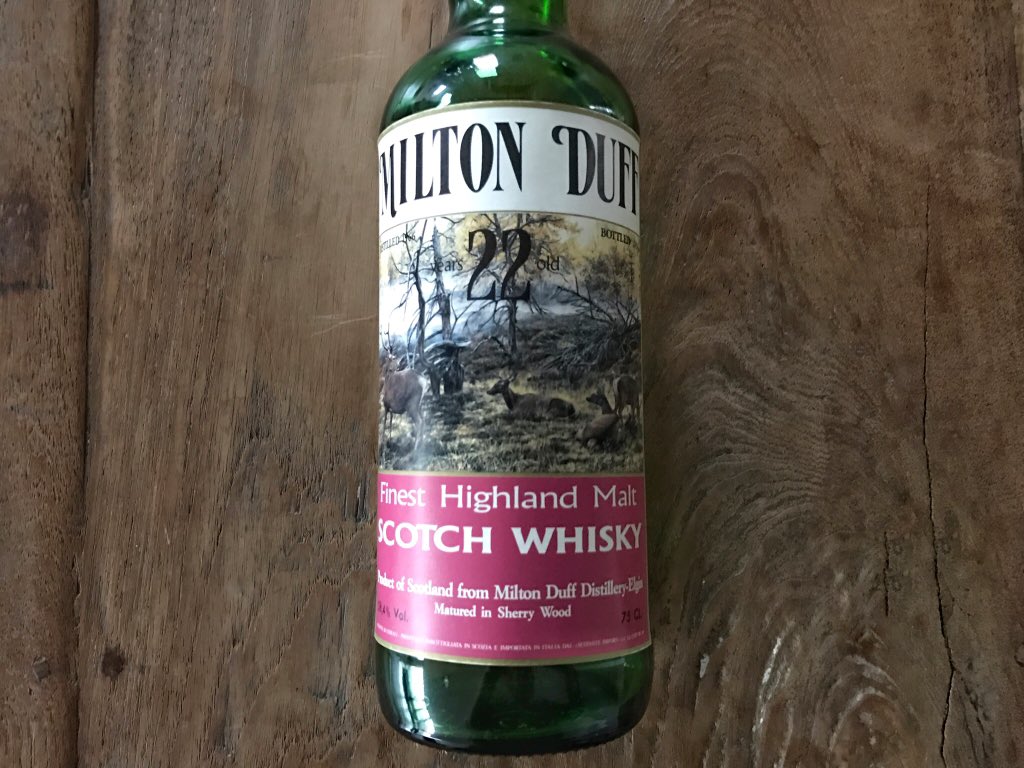 I don’t dispute that distilleries manage their cask supplies and wood better than ever given it’s a key component in their business, it’d be madness not to. The efficiencies of micromanagement that have littered many distilleries have now taken a hold in forests and planting programmes. I envisage that the wood going into casks nowadays is more nurtured and youthful than ever before. The problem being that this comes through via the whisky. I do love a sherry cask and these are capable of assisting the creation of great whiskies however it’s all become too focused and streamlined. This became truly apparent when sitting down with this 1966 Miltonduff, which I have to thank the magnificent WhiskyLifeStyle for a sample of once again and the rather good photographs in this piece. Remember this is the original WLS and not some fashionista incarnation from a neighbouring country. The site offers substance, style and informed opinion and I’m a ridiculously fussy git so words of praise are rare from me, regardless of my Dutch heritage.

Bottled in 1988 at an impressive strength of 55.8% – remember in those days there wasn’t much watering down of casks to the low levels of today – it forms part of the Pluscarden Valley series. This is the region where Miltonduff resides and the bottling was one of several in the series all from the same distillery. It’s sadly very collectable and rare, plus the downside of being very drinkable and expensive. It’s the cask here that transports us to a bygone age with an array of flavours lacking in most sherry casks I experience today. Enough of me and down to some tasting notes.

Colour: abused copper
On the nose: there’s an astringent bombardment of redness but it’s lacking your traditional sherry notes of the modern age. There’s rhubarb laced in cinnamon, with red apples and cranberries plus tonka beans. A little resin and a sun withered orange alongside mango and coconut. There’s a noticeable metallic aspect taking us into bronzed territory. Cranberry juice and toffee follow in a mesmerising experience.
In the mouth: not as pronounced as the nose but an echo from the past. A light coating of dark chocolate with orange giving it an almost liqueur aspect before the walnuts and figs step in, then an organic vegetative quality followed by liquorice. A fleeting syrupy sweetness, menthol and a chalky aspect arise. Then salt with blood oranges and cranberries conclude this beauty.

Just one of those whiskies that wouldn’t have been out of place at the Glasgow Rare & Old Whisky Show. For me it just confirms when we’re talking about the glory era of whisky, then the 60’s feature prominently regardless of whatever distillery you consider. They were all arguably producing great stuff and maybe even Jura was, then again it was only revived in the mid-sixties so it missed a fabulous party, which is ironic.