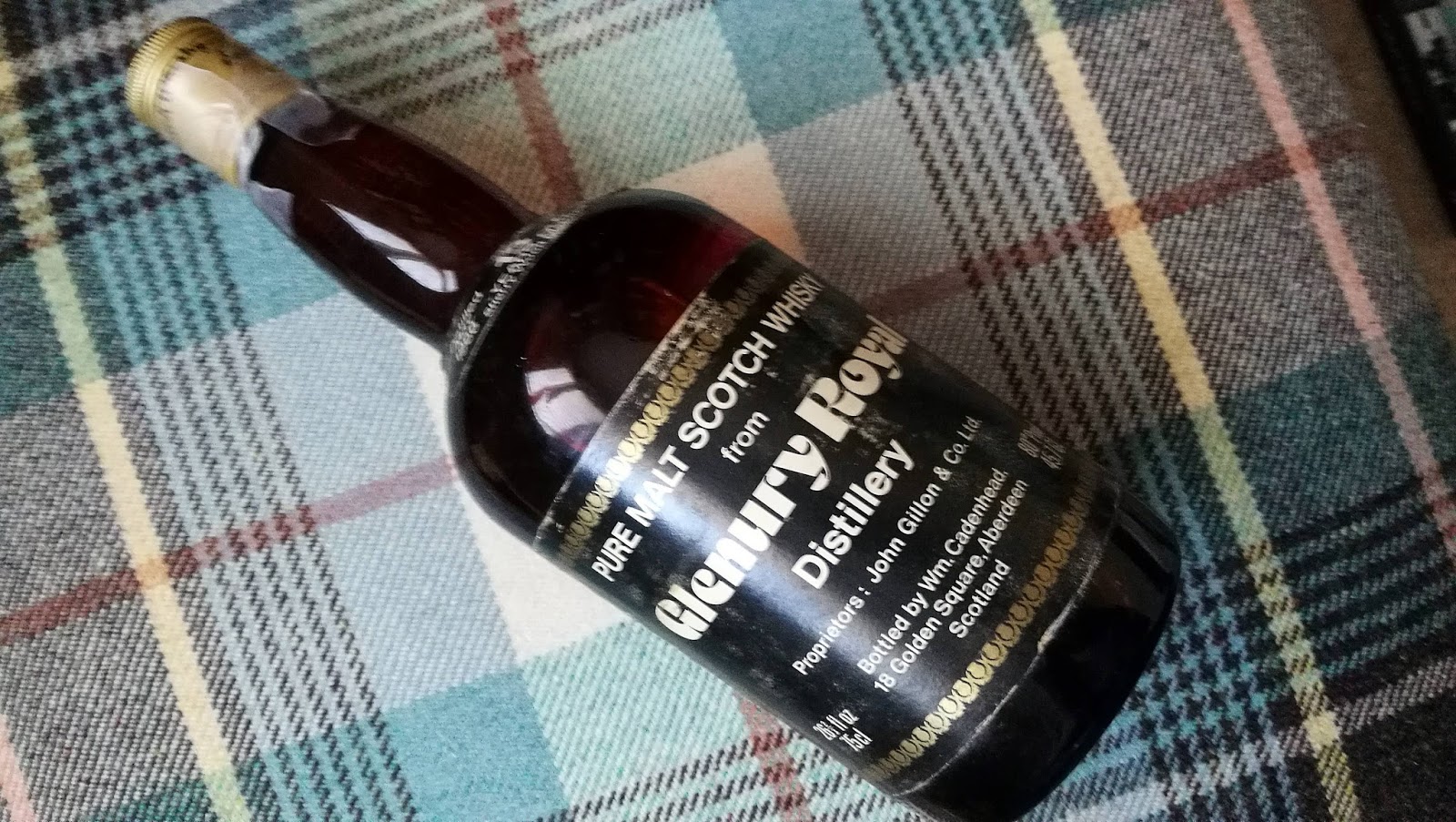 Before we jump into this review of a particular old bottling, can I just say how difficult it was to photograph in the Scottish sunlight? The brown glass and a label that wears its age with pride meant for a difficult photoshoot. Conversely whenever I’m at auction or bottle hunting, its these rugged examples, or those with a slightly reduced fill level, that are screaming to be opened.

And yet with this bottle in my possession at the time of this piece I haven’t opened it yet. Why is that exactly? There is an intrinsic value certainly and once I was guilty of deciding whether to sell a bottle to pay for a new boiler (suburban lifestyle versus whiskylifestyle) for the house, or open the bottle and just wear more clothing when it became colder. In the end the hardest option is more often than not the correct one to take. So the bottle was effectively swapped for a new boiler that keeps the house warm efficiently. With no more breakdowns this effectively means no more nagging from Mrs Rover; so that’s priceless.

The point being here is that the value of a bottle is what you place on it personally. I own bottles that have more than just financial value to them. One of my most prized is an old 1.5 litre of Teacher’s Highland Cream from the 1970’s. At auction it’s an insignificant lot, sitting just beside the Bell’s Decanters. Yet to me knowing that this bottle has come from my late grandfather’s cupboard and was his favourite dram; it’s an artefact beyond a price tag. The fill level is excellent and there’s no reason to suggest that it won’t make for a fine dram one evening, but I’ll just have to invite a whole load of people around to empty the bottle.

This Glenury Royal comes from my closed stash and is one of the infamous and prized Cadenhead dumpies, as they’re referred to nowadays. I just love the whole presentation ethic and the different fonts used for each release. They’re prized by collectors and enthusiasts of particular distilleries. I myself have such bottles for this mythical tasting one day where (and this is important to me), when I do open such bottles as this, they’ll be appreciated and the gesture noted. Whenever I’m asked to do a tasting, I do have a wee rummage around the cupboards as it does turn up some remarkable surprises such as a North Port, or 2 bottles of North Port. It’s like Christmas all over again.

Everything has a price to a certain degree but whisky is about sharing and experiencing. I’ve yet to create that event to host bottles such as this one, but the recent Glasgow Whisky Exchange Rare & Old Showoffered me the opportunity to experience this Glenury Royal without breaking the seal on my own bottle; for now, anyway. So how could I refuse a taste before the main event? 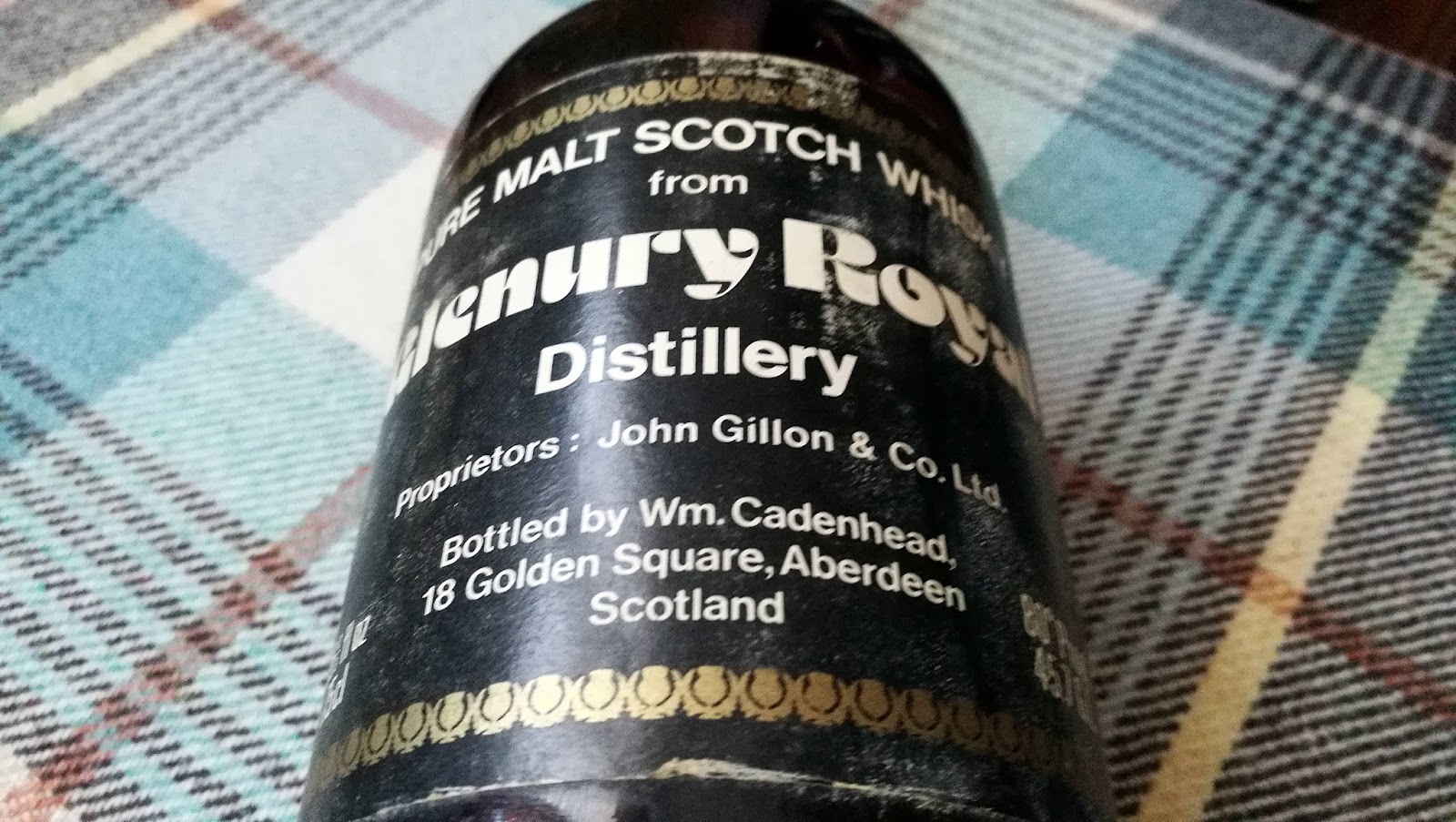 Glenury Royal is exceptionally rare nowadays and its likely very little of it is left in cask form. I’ve found the official Diageo releases that are of an advanced age, exceptionally woody where the host has overpowered and twisted the spirit itself. In comparison this example was distilled in 1966 (an awful year for any Scotsman) and bottled at just 13-years-old from sherry wood. This will give us more of the nature of Glenury Royal with the addition of an old sherry cask, which is what they used back then compared to today’s young bruisers.

The distillery was established in 1836 but was certainly around in the 1820’s and generally had a pretty unimaginative history. Being closed during the Prohibition and Great Depression eras was a common feature across Scotland, before being acquired by DCL and eventually Scottish Malt Distillers. Interestingly it was rebuilt in 1965 and 1966 when the number of stills were doubled so potentially on paper this whisky was distilled shortly after these changes. It was then closed in the 1980’s like so many other distilleries in Scotland, sadly never to reopen, the site was sold for residential development in 1993. All that exists today of Glenury Royal are bottlings such as these and a plaque commemorating its existence in Stonehaven.

Colour: Riesling
On the nose: very gentle arrival and subtle with a light caramel, shortbread and Scottish heather honey. A perfectly judged strength at 80 proof. There’s a vibrant fruity aspect with grapefruit, kiwi fruit and orange pips hinting at its sherry host and a body of pine cones and an earthy clay.
In the mouth: for the experienced you just know this is an old distillate on arrival it’s a gentle mineral quality but extremely light. Then a touch of orange, cinnamon, cardamom and lemongrass with an aged vanilla and waxiness. The finish is long and very dry with the haunting echo of the mineral and this lost distillery.

A remarkable experience and the best Glenury Royal I’ve had so far. Even back in the 70’s Cadenheads were producing bottlings of remarkable quality. I just love the lightness and flavours that you rarely stumble across in today’s whiskies. Another bottle proving how good the 1960’s were including that disappointment in 1966.