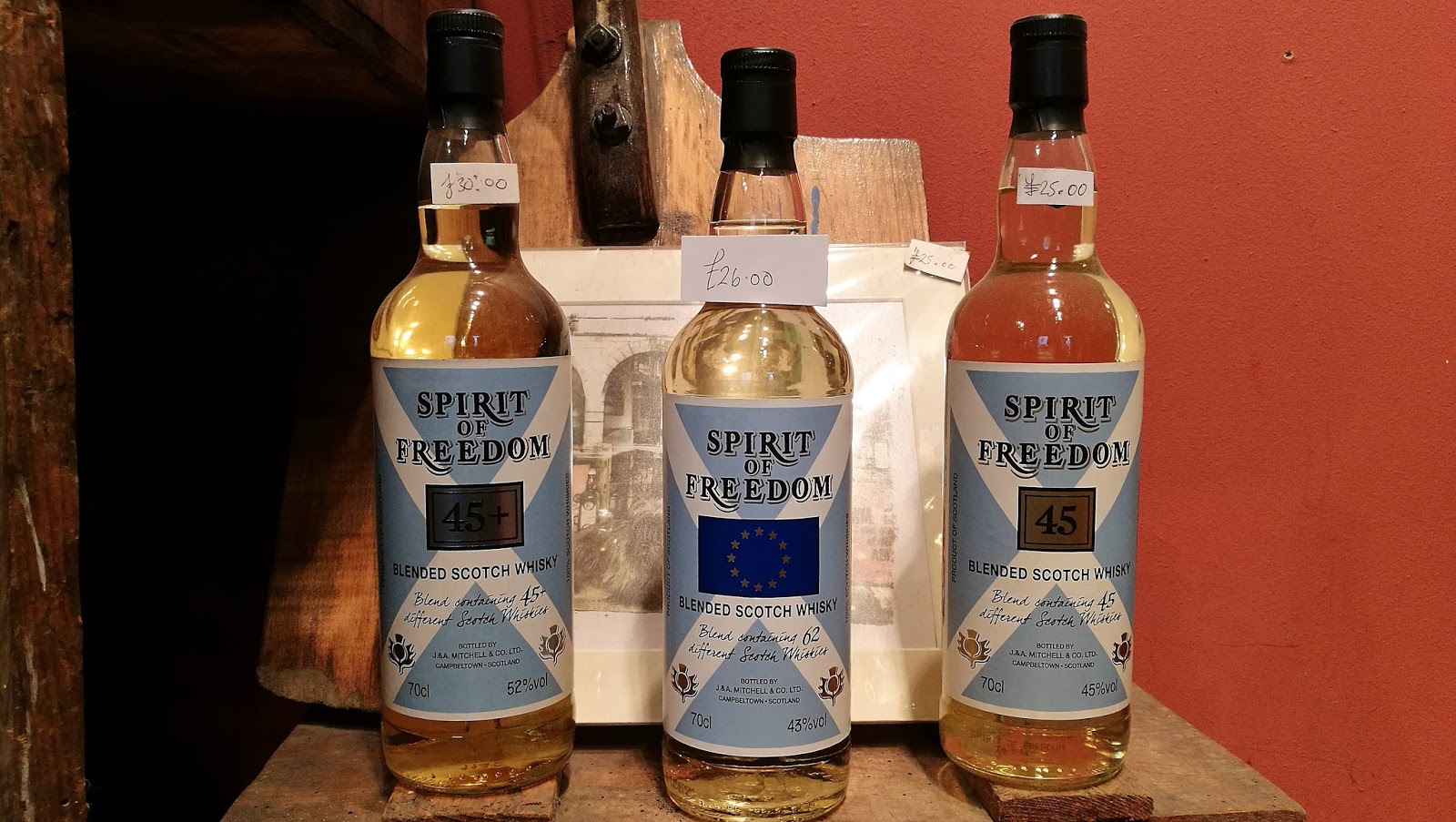 Given the current political client with the Scottish Parliament triggering their desire to have a referendum and the United Kingdom as a whole submitting their tender to leave the European Union. It seems an apt time to review the Spirit of Freedom 62 bottling from Campbeltown’s finest, which follows on from their Spirt of Freedom 45 bottling in 2014, to mark the 45% who voted yes. In comparison this 2017  ’62 edition features whiskies from (yes you’ve guessed it), 62 Scottish distilleries but it also symbolises the 62% of the Scottish public that voted against leaving the European Union. So armed with this latest bottling I guess it’s time to talk about politics…

Rightly, this isn’t a regular topic on these pages, but this bottling has to be put into context and now seems like the moment to do it. Generally, I’ve yet to see a sound financial or solid economic argument for independence. Last time the cash cow was the North Sea oil revenues but this has conveniently slipped form the verbatim of the SNP with 2016 revenues actually posting a loss for the UK taxpayer. Terrible timing, or ideal depending on your point of view after many years of surplus. For me, it just shows how the economic forces can be bent to the will of an oligopoly with little disregard for the effects out with those lining their own pockets in the Middle East. Then, there was the whole latching onto Sterling chatter as a hybrid currency that in 2017 looks like it was formulated at Secondary school.

Now don’t get me wrong there is a romantic image of being independent and what that entails. Voting purely for independence only at any cost based on recent presentations seems like a jump in the dark, or trying to pin the tail on the donkey. So after a close run thing a couple of years ago, we’re potentially looking at another referendum in the near future. There’s no denying that this is the ultimate SNP aim regardless of how it comes about. Romantic imagery aside I’m left to consider being out of the UK, at the back of the queue for European membership and once more what this may entail. What would help is a sound economic argument or outline but this never seems forthcoming. We just have Nicola and her sidekicks pursuing their goal of independence with the Brexit vote as its current camouflage. I’m honest to say that I’m firmly with the 62% here and there is an element of being dragged out of Europe due to economic and blinkered viewpoints in some areas south of the border; but I respect that’s democracy and it is the result. If you visit England and also Scotland, they are two distinctly separate countries with their own beliefs and views

So what do you do? That’s only for each and every member of Scotland to decide. I’ll admit the prospect of another vote in the near future doesn’t prompt much motivation from those I interact with. Voter despondency is quite rightly high, as is the thought of being asked the same question until the questioner receives the answer they were looking for. Then there is the possibility of another no result in the second referendum; what would that mean for the current government and their plans going forward? There is already some division amongst the public with many (quite rightly) proud Scots proclaiming their political views, whilst many others like to keep things private. Like any good marriage, or relationship, there has to be compromise and acceptance on both sides.

I have thought a little more recently about politics given the recent events and being faced with bottling. If Scotland is to make the argument for independence then I feel what must come first is some idea of what Brexit looks like and its effects. Then weighing up the options overall, as much as we can in theory we should show some patience and see what may happen. A sound economic argument would have to be made and to increase its effectiveness, I feel that the high echelons of the SNP have to step aside and let a new leader and team prevail. As much as I appreciate the stout robust leadership Nicola provides she is in the eyes of many damaged goods and a large proportion of the population will never vote for her, as its more a personal thing than what’s being debated. I feel if she showed more humility and acceptance of when things go wrong that this would be beneficial, but realistically it’s down to the next generation to carry things forward. However if the vote does materialise and the same answer is given then that should be the end of it not just for a generation but for generations. It was disappointing that the SNP tried to bury the new Forth Crossing being delayed again news by releasing this information in the midst of the Brexit. 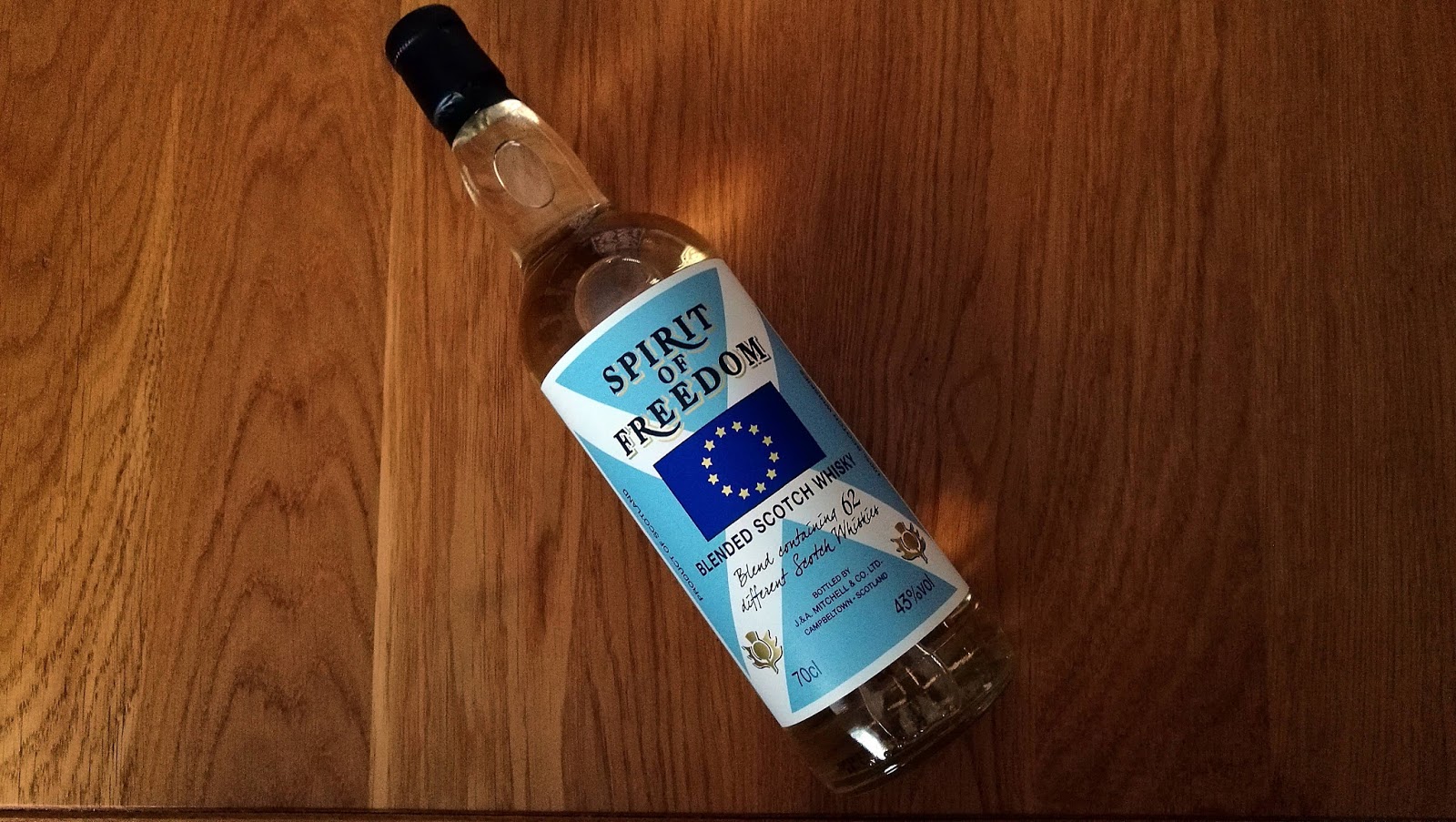 Politics aside, we’re now back with this whisky after all that political chatter. Sometimes with the rhetoric north and south of the border, you just want to detach yourself from it all and just enjoy the simple things in life, such as this 62 Edition. We’ll get on with this release right now and I promise no more politics until we’re faced with another similar political bottling. This is bottled at 43% and will set you back just £26.

Colour: steamed lemon pudding
Nose: freshly sliced green apples and a sprinkling of icing sugar. A little beeswax, pears and mint leaf. With water sawdust, spent matchsticks and crackers.
Taste: very fruity actually, more so than I was expecting from the aromas. Very juicy pears, some olives and kiwi fruit. Adding water brings out the vanilla and sugary shortbread.

Overall: yeah its a concept but also a statement. It’s a tasty blend that at £26 and 43% delivers just enough. Whatever your political beliefs or voting preferences, its a whisky to reflect upon and to enjoy with others regardless of their own beliefs. Scotland united in a bottle and hopefully as a nation, one day.

Does age matter when it comes to whisky? In recent years consumers have been on the receiving end of a marketing barrage to justify after..