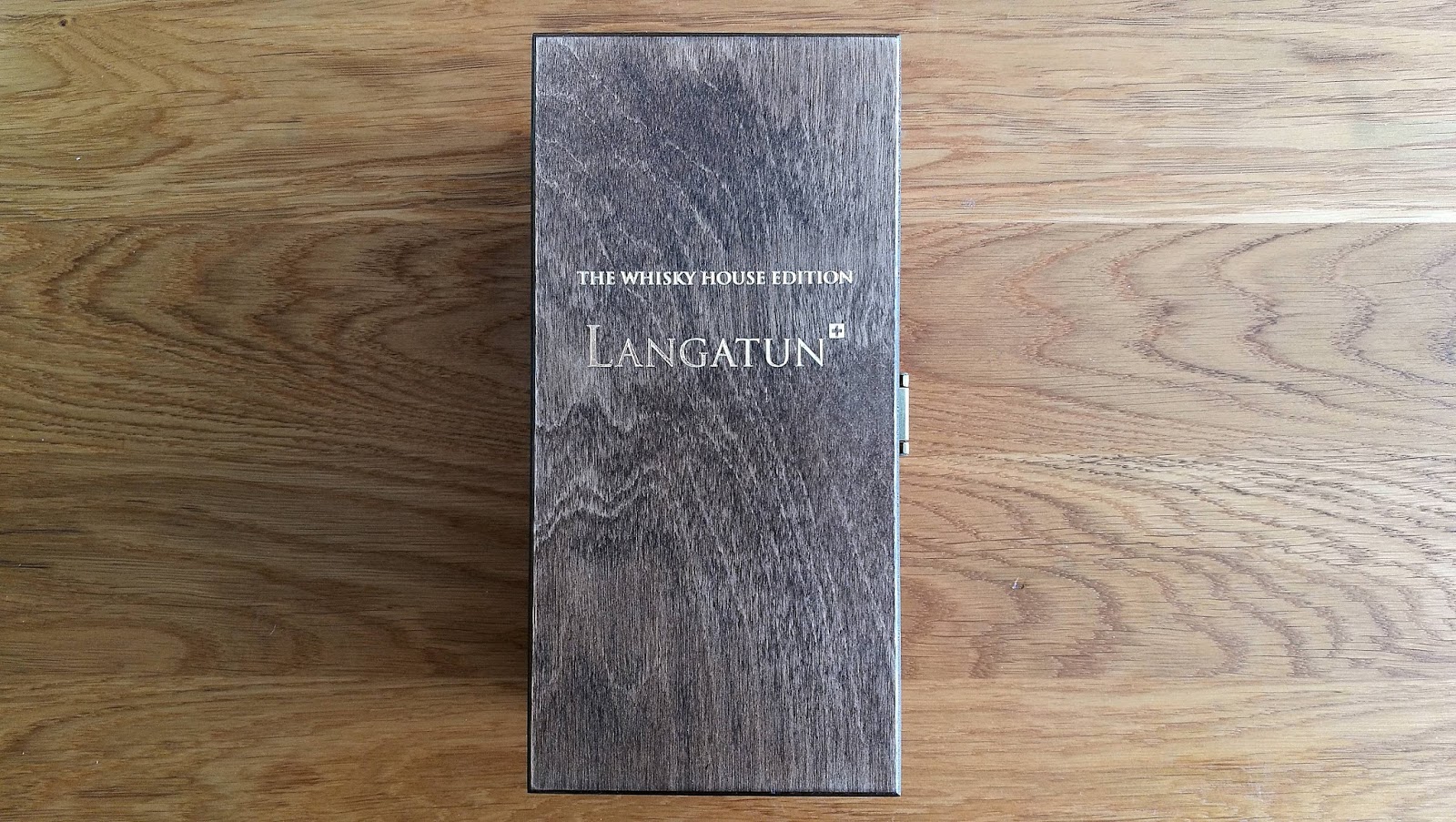 There was a pronounced, authoritative even, knocking at the front door. Answering, I was politely handed an envelope sealed with a distinctive wax stamp and red ribbon. The envelope itself was of significant quality and firm to touch. Significantly intrigued, and somewhat relieved that I hadn’t been summoned once again to appear before the Whisky Writers Guild of benigness, I retired to my whisky den.

Reaching for a Haru folded steel Japanese knife – where’s a good letter opener when you need one? – I opened this mysterious arrival. Inside there was a very brief letter, on what must be said was very fine paper indeed, with a short statement. Namely from whisky royalty himself, Duke of Derbyshire, Mr Mark Newton, he of Whisky Magazine fame apparently. Oh I thought, another decree or demand that I find him another case of the Billy Stitchell Caol Ila release. No, it simply stated Langatun Jacob’s Dram Pinot Noir cask; astonishingly good.

Your immediate reaction I expect is Langatun-what?Exactly, and if someone mentions Jacobto me, then I’m into Shepard’s Pie territory and debating which breed of lamb produces the best mince. Such are the stimulating chats I have in local pubs with farmers; that and the price of combine harvesters. In reality Langatun is a distillery and not one of these blink and you miss it, incoming Scottish producers, but situated in Switzerland. Switzerland? Exactly my thoughts.

This whisky was highlighted by another overlord of whisky namely Jim Murray’s 2017 Bible, receiving the award for single cask European Whisky of the Year. It’s an interesting coincidence as for a while now I’ve debated whether Mark is the pen name of Jim Murray, or at least a younger version. On occasion, the cracks have appeared. For instance, I do recall his eyes glowing red last year when experiencing the tragedy that is the Epicurean last year. At least when 2 prestigious sources highlight a whisky then you’re immediately interested, as word of mouth is the best form of advertising. I’m still forever surprised and humbled when a reader approaches me and says they purchased a whisky based on one of my reviews.

Still, back to this Langatun which was distilled on 8th November 2010 before being bottled on 13th December 2016. It’s spent its entire 6 years in a Pinor Noir cask (#140) before being bottled at 49.12%. It comes in a dinky 50cl bottle, which I must say is housed in a very sturdy box unlike some of the flimsy and cheap efforts we’ve had from Highland Park and their wooden frames of late. It feels proud and assured, continuing the theme that this is indeed handcrafted and loved from the moment of distillation to bottling. A rare commodity in Scotland these days with distilleries eager to fleece consumers on a regular basis. 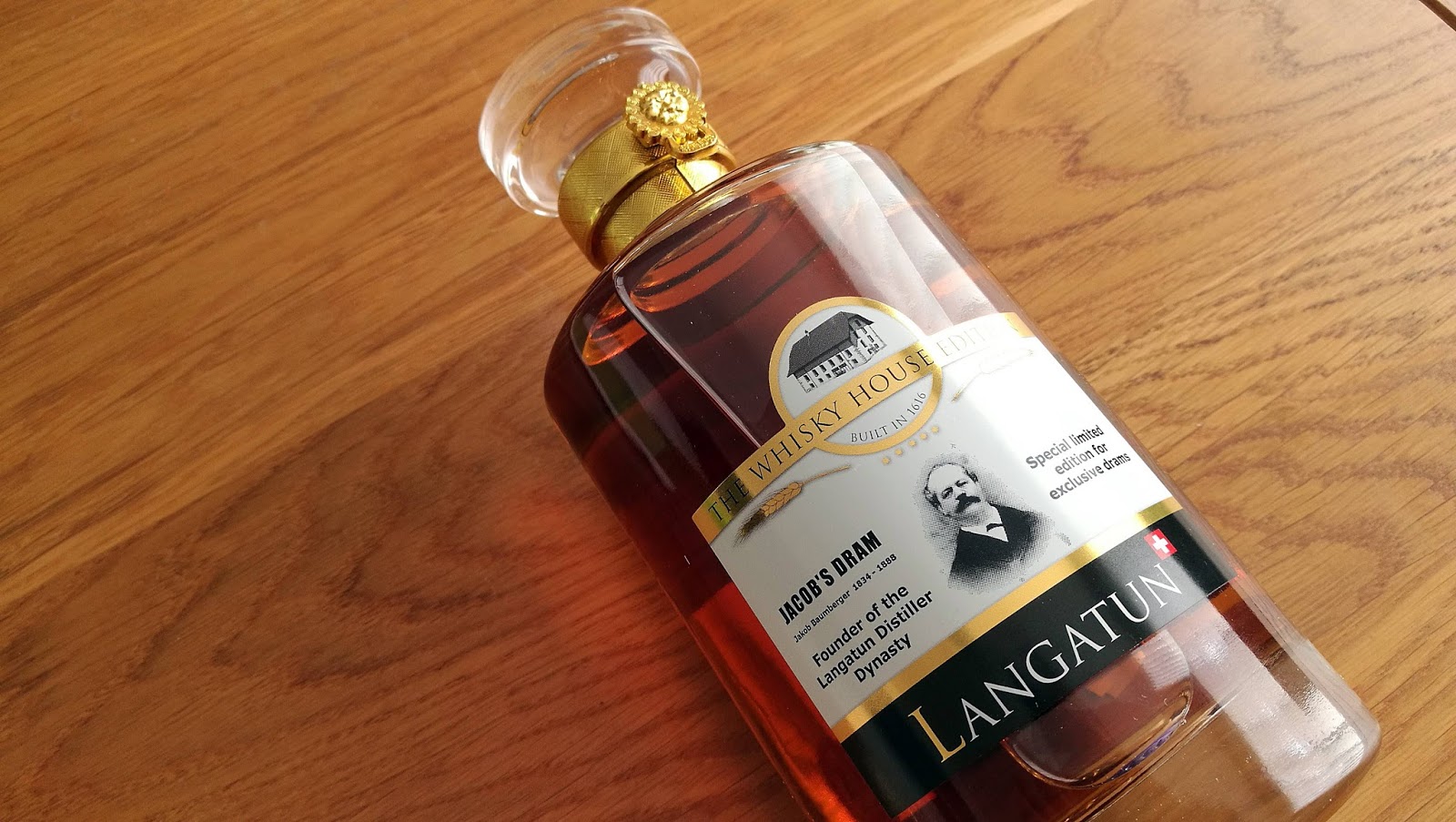 To ensure consistency we have to convert the 50cl pricing of £77.92 or thereabouts into a 70cl price, and this equates to £110. Clearly it’s not cheap yet this is generally the case with European whiskies and most things from Switzerland cost a little more don’t they? For me having purchased this myself, it comes down to the experience to gauge value; so let’s begin.

Colour: candied orange peel
Nose: it’s certainly a rich and intoxicating arrival with cherries, dark chocolate, a touch of rubber moving into rust. I’m split between dried cranberries or fresh raspberries; there’s a certain red aroma lightness that is engaging. Then over time it sinks into a homemade millionaire’s shortbread with the emphasis on the caramel. Water, if you want to experiment and believe me it’s good enough without, delivers ginger, more vanilla and returning to the empty glass reveals Turkish Delight.
Taste: I could rattle off here about the flavours, but the thing that strikes me most, or two things should I say, is firstly the density of the texture and then prolonged journey. It’s frankly and I say this through clenched teeth (as I never like to agree with Mark), an excellent whisky. There’s chocolate tablet, more caramel, strawberries and in the middle it goes all Rich Tea biscuit like. A rich nuttiness with a blend of hazelnuts and walnuts unfolds towards the end, before blackcurrants and raisins come in for the finale. Throughout underpinning the ride is a decadent maple syrup with figs and cloves.


Overall: I’m not going to descend into Jim Mark’s comments about this potentially being the whisky of the year and the remainder of 2017 being a colossal disappointment. That’s not my style. Instead, this is indeed an excellent whisky and a real eye opener coming from Switzerland. I’m not a massive fan of wine casks but here it’s certainly delivered a luxurious experience.
Currently you can go off chasing the Craigellachie 31-year-old for an excessive price given its recent award. Follow the marketing and ambassador breadcrumb trail as you’re expected to do, or venture off the beaten path. Live a little dangerously. Discover something new, far more exclusive and interesting at a fraction of the price. Langatun, your card is marked and expect more whiskies from this distillery to be reviewed in 2017.
47.21207867.7905623
CategoriesUncategorised