Recently I referred to the Glenfiddich as the Ford Fiesta of whiskies. This wasn’t meant as an insult although some did take it that way, but I felt it summed up the reliability, availability and standardisation of the whisky itself. Yes, it can be a little boring but with Glenfiddich you know pretty much what you’re getting in advance.

You can package it in bling or white stripes and fancy alloys but essentially the DNA beneath remains that reliable Glenfiddich. At least the distillery does offer some character unlike Glenlivet, which you really have to go back in time to discover. ‘Livet to me has sold its soul in pursuit of output and sales; what’s left is pretty mundane, inoffensive tumbler material.

Whenever I’m asked about distilleries that disappoint, or someone is struggling to find some solace within then I recommend 2 avenues. Firstly, the independent bottlers, who often bottle without master blender tampering or other additives to create a sea of uniformity. In essence you’re looking for the distillery DNA that restores your faith in their whisky and it’s not for everyone. Sadly, some distilleries are not bottled by the independents for a variety of reasons and Glenfiddich is only seen nowadays as a teaspooned malt and even then rarely. Instead you need to visit the distillery and bottle your own.

Admittedly it’s not an accessible option for all but plenty of bottles seem to appear on the secondary market for those unable to travel. The actual bottling is performed in the distillery shop and is a satisfying experience. I always struggled with Auchentoshan, writing it off as a substandard whisky until the 2006 Bordeaux bottle your own option was recommended and then you realised what it is truly capable of. It’s a valuable outlet and opportunity to try a more robust and rugged, untampered whisky. All of this brings us nicely to the whisky at hand this evening. Yes, it’s a Glenfiddich bottled as part of the Spirit of Speyside Festival, which I’ll be attending once again this year and will make an effort to visit the distillery and bottle my own; sidestepping the expensive chess sets and ornaments. 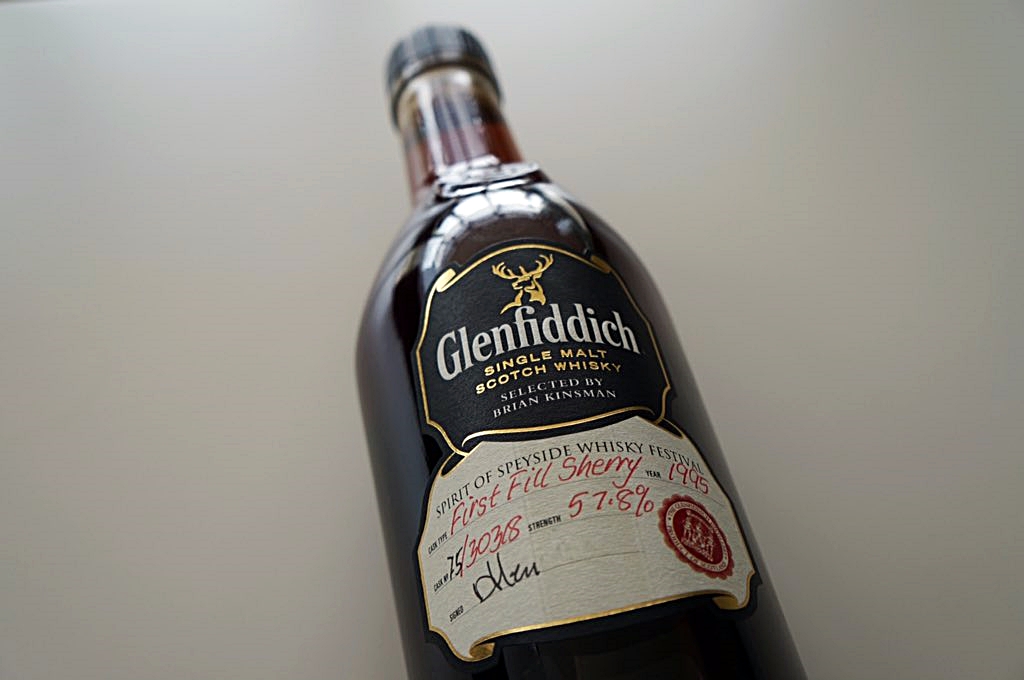 Once again I have to thank WhiskyLifeStyle for the sample of this Glenfiddich and the photographs on this piece. I’ve attended the festival twice in the last 3 years, or if you’re reading this after April 2017, it’ll be a hat-trick over 4 years. It’s Scotland’s best whisky festival and bottlings such as these are a reward for enthusiasts who make the journey and take the time to attend such events.

This Glenfiddich was distilled in 1995 before being bottled in 2015 to celebrate the arrival of the Spirit of Speyside Whisky Festival that year. Sold as an exclusive from the distillery shop, it’s a popular annual bottling with the staff and visitors. Announced on the eve of the Festival, you just don’t know what Glenfiddich are going to produce. Bottled at 57.8% strength from a first fill sherry cask (number 30318), resulting in an outturn of 250 bottles, this is a unique opportunity to try a cask strength ‘Fiddich without additional tampering.

Colour: mahogany
On the nose: a rich assortment of chocolate and plums with cinnamon and treacle. A little brown sugar with prunes and coffee beans. The 1st fill cask has been pacified by the Glenfiddich spirit resulting in a gentle unison.
In the mouth: the subtle and harmonious nature continues with stewed apples, Christmas pudding dried fruits and spices including all-spice. Cola cubes and figs with elegant and gentle treacle and brown sugar finish.

It’s nice and not the aggressive beast I was expecting on paper. This Glenfiddich has more to say than most official releases and yet retains a balance suggestive of being more a malt blend than a single first fill sherry cask. Very good, and hopefully the 2017 Spirit of Speyside bottling keeps up this high standard.