This will be the third Blair Athol review of 2017 here at Whisky Rover, at this rate we’ll have covered the complete range of releases by Christmas given its scarcity generally as a single malt. As a refresher we had the Fauna & Flora classic bottling that is still widely available at most Diageo distillery shops. Then a recent visit to the distillery itself prompted the purchase of the Distillery Exclusive bottling that was pleasant enough.

The distillery when I visited it earlier this year was closed for the silent season, thereby allowing the replacement of a still that had endured for over 60 years. The still room was particularly fascinating as 4 stills are squeezed into a space that seemed only slightly larger than your living room. In theory you could outstretch your arms and touch 2 of the stills, not that this is recommended as the heat in that room must be something else when they’re all in operation. Such was the confinement that to replace this ageing still, the roof of the building had to be removed and the fat copper still plucked out in a scene I like to imagine along the lines of Monty Python.

I’ve got another Blair Athol lined up with the Manager’s Dram bottling, but don’t worry my allegiances remain with The Tormore. With all this official-ness (I guess that isn’t a real word), we should take a look at the fertile independent sector and none other than Cadenheads. Now, if you’ve stumbled across this website only recently, or only follow those than indulge in PR friendly news updates, then you’ll be blissfully unaware that Cadenheads for their 175th Anniversary have been depriving whisky enthusiasts of their regular social activities by releasing bottles on a monthly basis.

It’s been a tough gig let me tell you, with this 28-year-old appearing in their March outturn and representing only the sixth review I’ve gleamed for that particular month. Even now as I type this introduction, April’s releases will include a Ledaig, a 31-year-old Canadian whiskey, an inviting Bladnoch that I’ve already tried and a rich Glen Grant sherry butt. All incoming here and another month spent eating beans on toast; but its worth if for the whisky.

For now, we’re sitting down with this Blair Athol, distilled in 1988 before being bottled at 28 years of age in 2017 resulting in an outturn of 306 bottles. As it’s an entry in the Small Batch range it’s actually a vatting of 2 bourbon hogsheads and 53.6% strength. This method of combining casks can produce an interesting dynamic where distillery characteristics are amplified and potentially a weaker cask still brings something to the equation. This bottling would have set you back around £118, which considering its age and scarcity of single malt bottlings from Blair Athol, is good value indeed.

Colour: a sister ratched vanilla marshmallow
On the nose: continuing that vanilla and cream feeling, its punchy without water and has plenty to say! There’s a surprising level of waxiness that I wasn’t expecting here nor the hint of strawberries, or is it raspberries if you leave it to stand for longer? A certain redness that’s for sure and it mixes in well with the sugary caramel and almost beeswax reverting back to the beginning. A sticky, fruity jam quality as well, blackcurrant I reckon and red liquorice. With water it was almost as if I had a cold once again and was picking up cherry menthol lozenges.
In the mouth: very juicy on the palate with that charred cask around the edges, smothered in molten chocolate. Dirty vanilla as I like to refer to it as; very active wood dynamic influence here. Almost a saltiness tang towards the end – have Cadenheads kept these casks at Campbeltown I wonder? There’s an earthiness and almost balsamic depth to the experience here with a dark chocolate finish.

Well, another overlooked star amongst the March Cadenhead outturn. For the price this delivers and it does make you think whether Blair Athol deserves more of the single malt spotlight if it can free itself from the shackles of the Bell’s blend. A robust and well defined whisky with more to say than you’d envisage and perfectly drinkable at cask strength, speaking of which time for another… 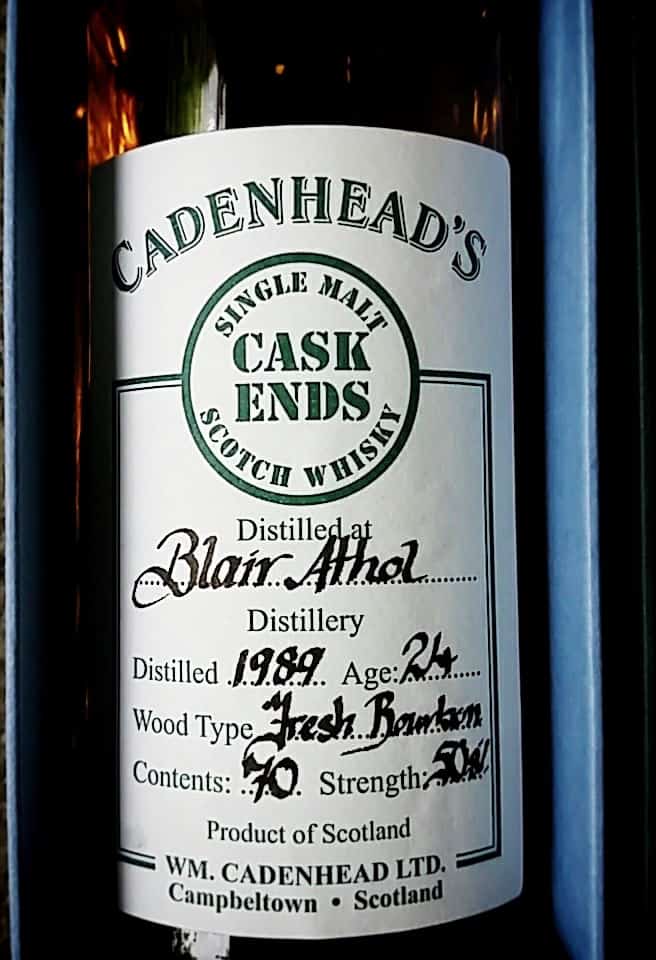