With the imminent return to Speyside as I sit in front of the laptop typing this introduction, I felt it only apt that we should review a whisky from Speyside’s greatest distillery.

During the 2016 Spirit of Speyside Festival a group of likeminded whisky enthusiasts combined to form an elite special unit that is now referred to as the Tormore4. The name was inspired by the location of our accommodation during the festival. As part of paying homage to our host we also put together a detailed Tormore vertical tasting and even ventured behind normally closed doors for a private tour of the distillery. These and many more events formed a highlight of 2016 for many of us, including Mark who as a Royal ambassador of whisky goes on all sorts of trips nowadays. Even the most affluent and tweed-rich found solace within a group of educated whisky enthusiasts and whilst stories have slipped out about our activities including those breakfasts; you’ll never know everything.

Since we disbanded to various parts of the UK, our appreciation and communication around Tormore has continued. At the turn of the year I sat down with a couple of missing pieces of the jigsaw to definitively cover every official bottling there has been from this picturesque distillery. One vital avenue has been the continued work of the independent bottlers to showcase what Tormore can deliver. In particular Signatory does seem to have access to a large number of casks dating from the early 1990’s that through our experience are exceptional in capturing the essence of Speyside.

This Signatory bottling was part of a bottle share organised by The Nosing Arse. Clearly he has been listening as have many I presume, because when visiting the excellently stocked Edradour distillery shop there was only bottle of interest; the Tormore. What I also love about Signatory is their willingness to provide as many details as possible, starting with the distillation date of 7th April 1992, before being bottled on 11th April 2016 at 24 years of age.

The whisky is comprised of a vatting of 2 bourbon casks (5694 & 5695) at 54.3% strength, resulting in an outturn of 338 bottles. This approach of vatting casks can iron out any flaws in a particular barrel but adds credence and amplification to the characteristics of a distillery. And through my experience, the 90’s is throwing out some excellent Tormore’s despite the rather lacklustre current official range. This particular bottling if you can find it would have set you back around £80, but fear not Signatory have bottled other Tormore’s including vatting and single cask examples. Any of these is a commendable way to begin your appreciation of this distillery. 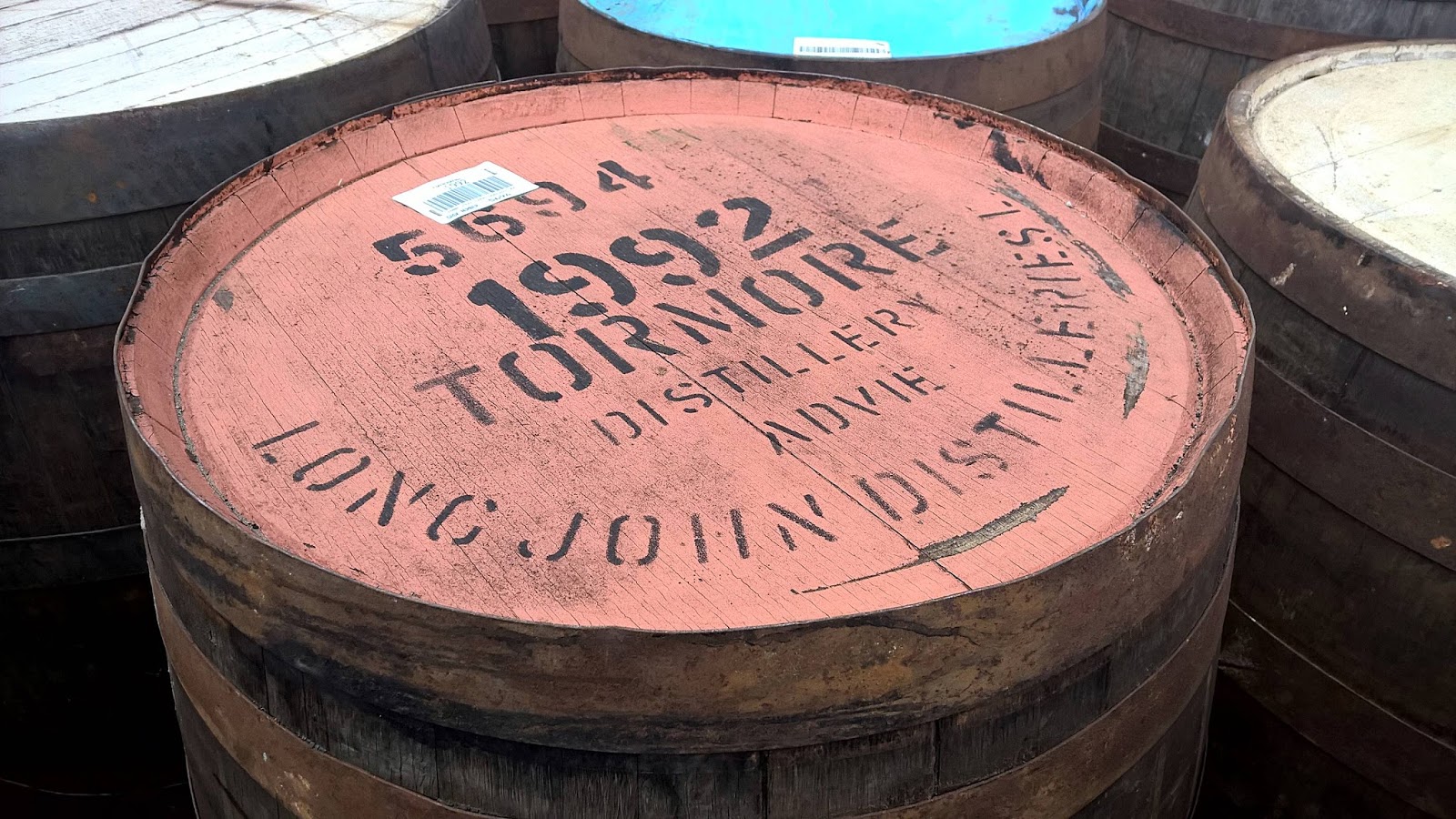 By coincidence, as Mark and I were travelling up to Speyside for the 2016 festival. We stopped at Edradour and stocked up on vital supplies for the cottage. Whilst in the car park we noticed a couple of casks of Tormore sitting empty and although I was very tempted to take one home, we were already ferrying too much whisky. Instead, it turns out this photographed cask is one of the 2 component originators for this bottling. Now, you cannot make this up! Let’s delve into what that cask has given us today.

Colour: ginger snaps
On the nose: caramel laced with nutmeg, a golden syrup consistency and sweetness unfolds. Plenty of vanilla from the wood but it’s not bourbon-dominant and transitions into an ice cream cone. Stewed apples laced with some sweet cinnamon thrown in and red liquorice.
In the mouth: subtle and rounded, a sprinkling of brown sugar with vanilla sponge and memories of butterscotch angel’s delight. It’s not hugely detailed, provocative or layered but offers enough assurance. Almonds in their shells and water moves this into peanuts with more ginger.

I feel that this lacks the fruity aspect of some Tormore’s I’ve enjoyed recently. In this respect it lacks that additional layer but still maintains plenty of vibrancy and delights. A solid example.