With each passing day my appreciation of old blends grows. Whether it’s the distance between what’s served up today as whisky and a bygone era, or just rose tinted glasses is debateable. The proof as they say is in the pudding and the comparison between today’s blends and their forefathers.

Unfortunately, the blends of this current era are pale imitations of previous examples from the 1980’s or before. Take the taste test for yourself to confirm the outcome. The reasons for this are numerous, but at the heart of the matter is the pursuit of profit through pushing down costs. This is achieved through more efficient distilleries with less staff and centralised facilities to mature the whisky, as opposed to warehouses on site. The ratio of grain versus malt whisky has become dominated by the former and even those grains themselves have become more benign. Through the closure of facilities such as Cambus, Garnheath, Port Dundas and their ilk, we’re left with more neutral grain spirit. Even now it seems North British is about to move away from its use of maize which may have a detrimental effect.

We could continue onwards discussing the direct heating of stills, more efficient barley strains, the youthful age of casks from micromanaged forests and other changes. There isn’t one silver bullet but an accumulation of reasons that result in subtle changes whether its malt, grain or ultimately blended whisky. So whilst the marketers may suggest we’ve never had it so good, I suspect that they’re referring to shareholders rather than the end consumer. Sadly, this is in an introduction that I could slip into any review nowadays, but it seemed apt for this Old Guns Finest Scotch Whisky.

This is a blend bottled by Low Robertson and Company Limited who were based in the Leith area of Edinburgh. This port area was originally the major hub from whisky arriving and departing from Scotland for many years, with various warehouses and merchants established in the area. Today its dominated by restaurants and the terrible city apartments inhabited by the fashionistas. Much like whisky, whether this is progress is open to debate. 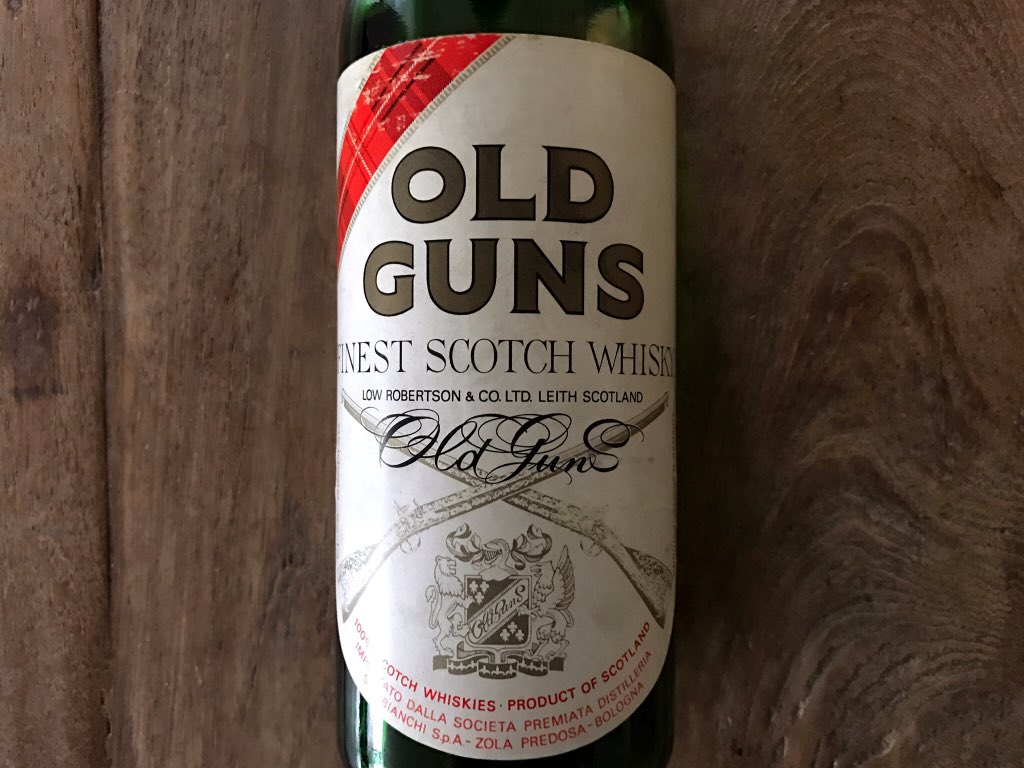 On paper Old Guns represents an intriguing prospect not only because of its unusual name. This was a blend that existed in the 1970’s for export purposes and its main market was Italy. For enthusiasts the interesting nugget concerns the bottler, the aforementioned Low Robertson. As in 1967 they took over the license of a distillery called Port Ellen on Islay. The distillery had been closed since 1930 although the maltings and famous warehouses had been in use over the years. Work began in 1966 to revive the distillery and enable production, this lasted 18 months and involved doubling the number of stills to 4. The company was eventually swallowed up like many Scottish bottlers by a larger firm, in this case the Distillers Company, before being acquired by Guinness and eventually becoming part of Diageo.

As for Port Ellen, we all know the history of this iconic distillery that mainly produced for blends, having never really enjoyed a single malt profile until it was long departed. This sample was kindly provided by WhiskyLifeStyle and the question is there a distinct Islay, if not Port Ellen, influence?

Colour: a baked lemon cheesecake outer layer
On the nose: oily with a gasoline peaty exterior followed by thyme and Western Isles gorse. There’s a coastal scrub with a salty spray and honey lapping the fringes. A fruity aspect with apricots followed by moss, brine and a sooty chocolate.
In the mouth: initially gentle it lulls you into a false sense before the peat arises and continues into liquorice, seaweed and a mineral aspect. There’s a sugary sweetness before the brine kicks in with a twist of lemon for added effect. A lovely prolonged finish leads you towards another dram.

Ah, when they actually did blends that offered an experience rather than the bottom line. We can laugh nowadays about claims thanks to the marketing scams we endure as whisky drinkers concerning the finest casks, rare, limited edition and hand selected whiskies. It’s all complete nonsense. However, here’s a whisky that claims to offer the finest Scotch whiskies and upon tasting you will conclude that there is some element of truth to that statement.

It’s another vertical tasting but I’m breaking away from the focus on a single distillery to instead concentrate on a famous blended Scotch whisky. In..