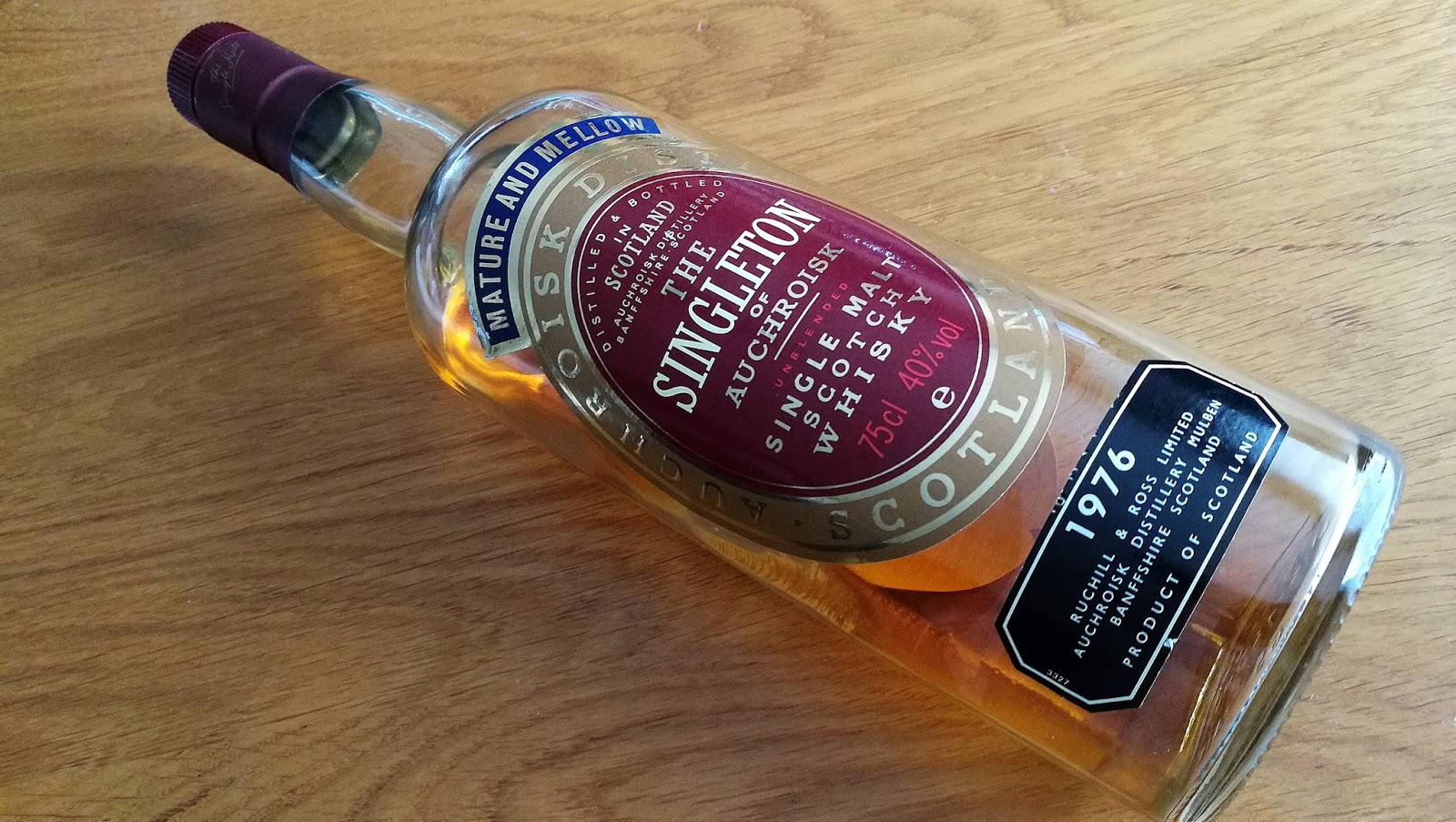 Last year as part of the Spirit of Speyside opening gala evening, we and its very much the royal we in the sense of the Tormore 4, were part of a group invited to tour Auchroisk distillery, which isn’t normally open to the general public. It was a nice touch despite the rather hectic car journey where we became fashionably late, but arrive we did. I’m not normally used to invites or official gatherings as I still prefer the shadows although my notoriety seems to grow with each passing month. However, I’m glad that I did tag along and notch another distillery to the visited list.

In fact, without knowing it, Auchroisk was set to make a series of impressions during 2016 here at Whisky Rover. Later that year, Cadenheads bottled as part of its exclusive Club a 1989, 27-year-old Auchroisk from a sherry butt. Then whilst on Speyside we met Colin who is the distiller for the up and coming Ballindalloch distillery, who used to work at? Yes, Auchroisk. Today it’s a massive producer, capable of producing nearly 6 million litres annually mainly destined for the Diageo J&B and Johnnie Walker blends. Touring the distillery with the manager, it was clear how much pride and effort they put into the Auchroisk we know today.

This particular bottling itself dates from the 1980’s and was the debut single malt from the distillery, which was only established in 1974. So this is very much the DNA of the distillery during its infancy. Originally conceived and financed by the IDV Group, ownership had changed by the 1980’s and its then new owners realised that this young distillery primarily built to produce stock for the blended scotch market was capable of much more. Hence this release which have here that was part of a bottle share kindly organised by Tom over at Jura’s Whisky Reviews. When the chance arose to experience such an early bottling from this Speyside distillery, well I had to make a purchase.

Those of a numerical disposition will have already calculated that this bottling is around 12 years of age. Making it a standard age for a distillery bottling. It’s also worth highlighting the Singleton aspect here that adorns the bottle. Today, we associate the brand with the Diageo juggernaut hybrid-single malt that encompasses several distilleries including Glen Ord, Glendullan and the Dufftown. I recently sat down with the 12-year-old bottling from Dufftown and frankly wasn’t impressed is putting it mildly, so I remain optimistic that this Auchroisk will buck the trend. 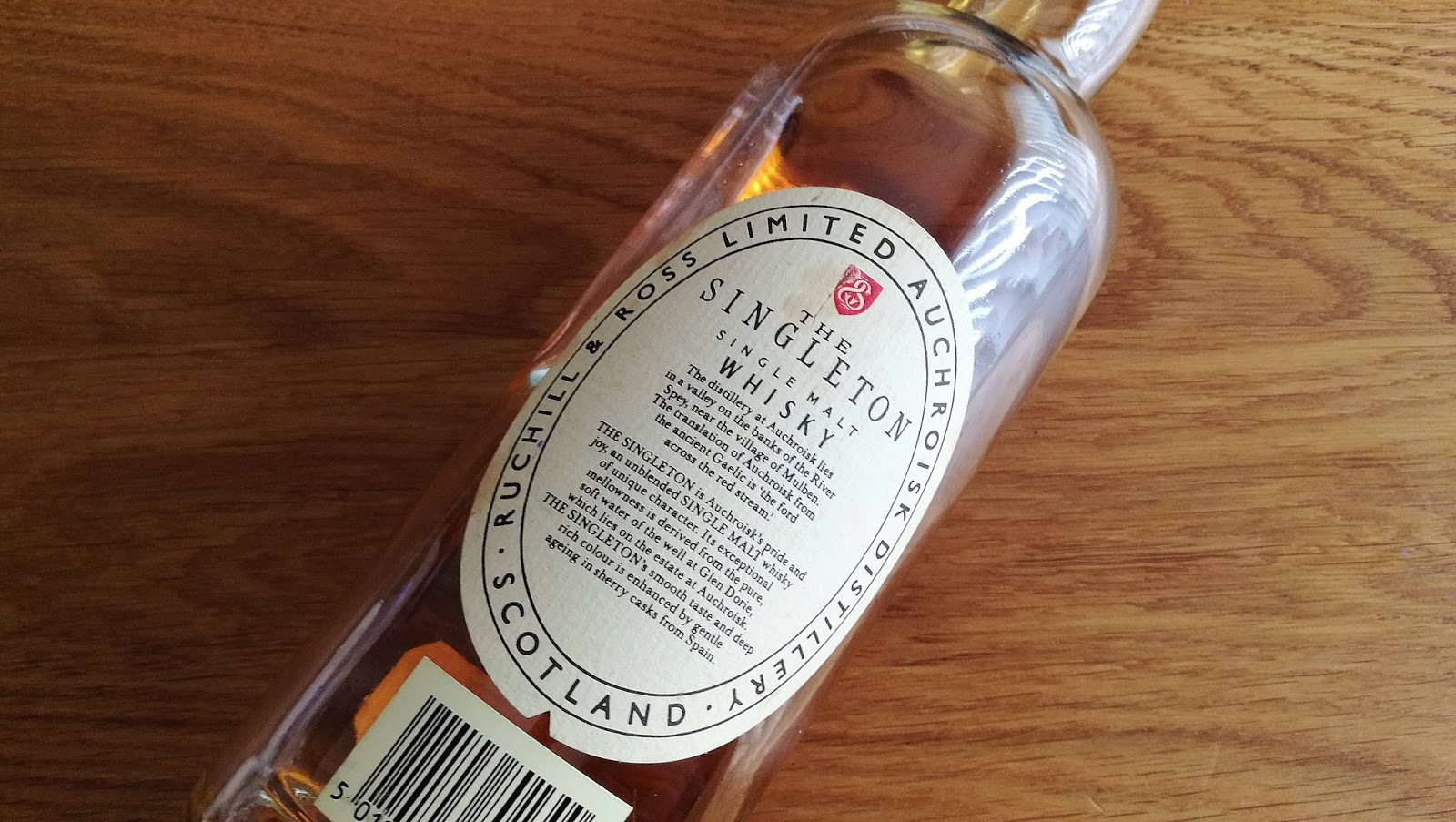 Back in the 1980’s, the Singleton was specific to Auchroisk that revived the name. Originally it was used by whisky merchants to describe the last remaining cask from a distillery that they had within their inventory; the singleton. When you think about the name Auchroisk, which means ford of the red stream, there are a multitude of ways to say it wrongly, so the revival of an old term made perfect sense. Let’s see if this release sets the benchmark for all things Singleton.

Colour: a fresh honeycomb
Nose: an interesting arrival with caramel and a hint of orange. Then there’s a buttery almost herby aspect with thyme before lapsing into sweet tobacco and Papier Mache. A sticky resin followed by dark chocolate and a touch of mint leaf.
Taste: it has a little bit of an alcohol kick that soon evaporates into a more streamlined Speyside affair. The gentle traits of apples, caramel, raisins and a twist of pepper trot by. A handful of coffee beans and cardamom followed by marmalade rounds off an enjoyable trip.

Overall: with Speyside whiskies bottled in the teens unless you’re experimenting or going down a sherry or wine cask aspect they are only going to say so much. This Auchroisk has an above average amount to proclaim and is very easy drinking, enjoyable Speyside dram without any fuss or flannel. Well worth tracking down a bottle instead of the current Singleton offerings.

The reassuring thud of the car doors closing reverberated across the stark Speyside landscape followed by the growl of an engine springing into life. The satellite navigation..