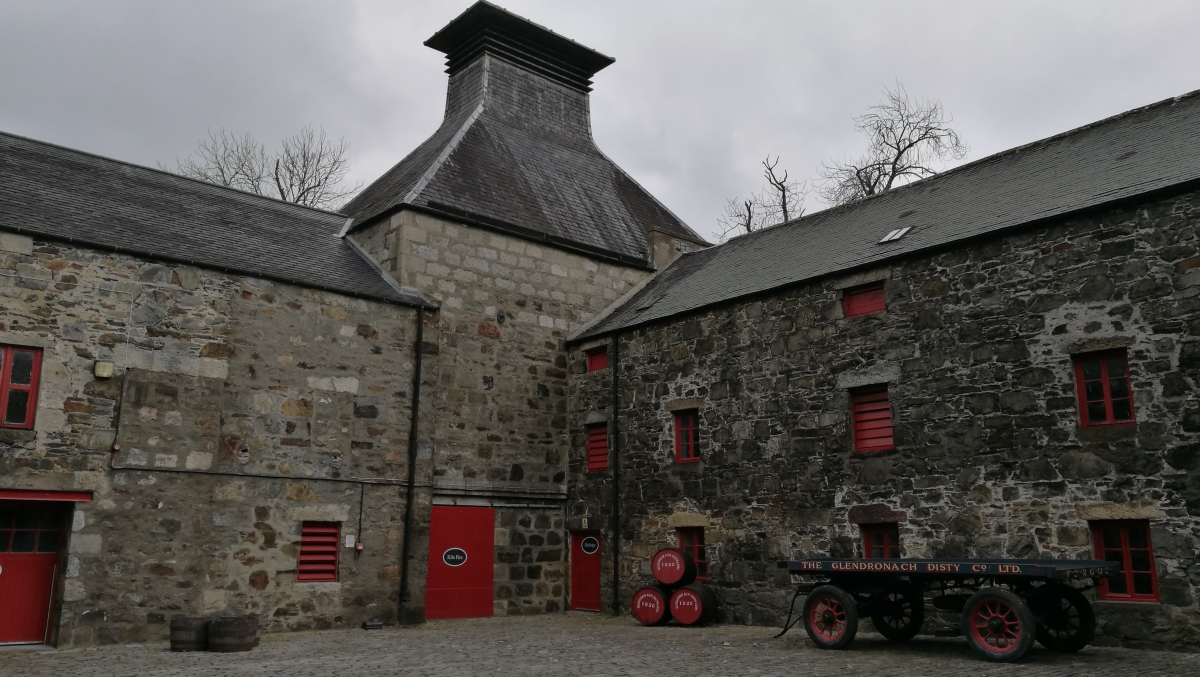 For the second year running, on our Spirit of Speyside Festival Super Sunday, we headed towards Huntly to pay homage to GlenDronach. Last time we took the staple distillery tour which was ideal timing given the takeover by Brown-Forman. A year on, we wanted to see what changes had arrived at this remote whisky outpost and opted for a more luxurious option with the GlenDronach Connoisseur tour. It’s a pleasant drive across the rolling countryside as #theTormore4 rolled out, allowing us to shake off the ill-effects of the night before and the persistent odour of the epic cottage campfire.

Upon reflection, the standard GlenDronach offering is more of an entry level tour and doesn’t grant access to a warehouse. That’s a disappointment, as it’s my favourite part of the tour; being able to share the dunnage atmosphere, sense of time and patience. This environment is always my advice to anyone feeling pressurised by the demands of modern day life. Get yourself into a dunnage warehouse and switch off. Soak up those aromas and dream about the whisky potential.

We reached GlenDronach on what was developing into a beautiful refreshing morning. Checking in for our Connoisseur Tour, our presence seemed to influence a travelling German malt brigade who decided against the standard tour and thought if it’s good enough for #theTomore4, then they should opt in as well. Clearly there’s no Brexit when it comes to whisky and our European chums.

Thankfully during this #dram17 weekend, GlenDronach had the foresight to call up a very experienced guide and Karen was to take us back around the distillery, into a warehouse and then finishing with a tutored tasting of 6 whiskies that she had selected. Standing outside the main distillery buildings, our band had now swollen to 8 and we remarked on the stylish still house that was added to the original distillery buildings. A marvellous example of 1960’s architecture that I suggested to the group reminded me of my old primary school. Talk of the water source and the site history, no doubt allowed Karen to gauge the level of experience amongst the cartel she was accompanying. 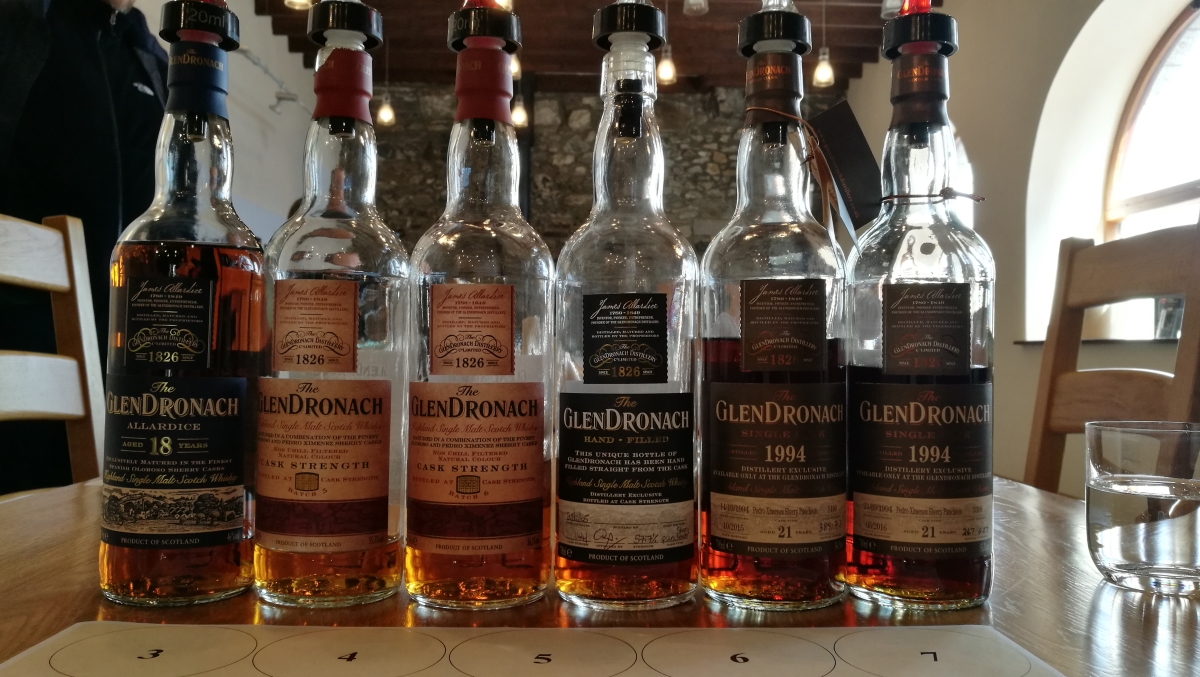 From the outside, little has changed since the arrival of Brown-Forman with the only exception being the Stars and Stripes that flies alongside the Scottish Saltire and the United Kingdom. This is welcome as GlenDronach is visually a charming and classic distillery with the exception being the added still extension that was commonplace across the industry during the swinging sixties. Moving into the stunning cobbled courtyard, discussion turned to the farming community and the local desire to be chosen by the distillery to provide barley, as it pays more than going down the cattle feed alternative. Thankfully, there was no discussion about soil type.

Then the disappointment of no photography allowed indoors. This is a rule we’re seeing across many distilleries nowadays and given GlenDronach isn’t in production during the weekends, I do feel there should be a compromise. After all, we do see official photographs and the last distillery in Scotland to meet a tragic fate was from memory Talisker and that had nothing to do with a camera. A shame, but it didn’t hamper our tour experience as Karen kept us entertained with facts and tales about the distillery. Of particular interest were the mini-condensers, perched behind each still that prompted an informative discussion. Having recently seen within an old full-sized condenser at Knockdhu, it was interesting to hear about their maintenance and the problems associated with such a piece of equipment. They can have a short shelf life but pay for themselves within a year, although I remain a fan of worm tubs in general.

Ushered into a nearby dunnage warehouse we sampled the atmosphere of these slumbering GlenDronach casks. Again, no photographs, but you were able to take some shots from outside with the doors opened as a memento. This tour highlighted that the key component is the guide. Karen was fantastic and elevated what is a standard walk through a distillery into a memorable experience. Engaging, knowledgeable and enthusiastic it reaffirmed our faith in the mothership that is GlenDronach.

Then for some, the best part of any tour was a set of 6 whiskies she had selected and guided us through. Sadly, I was the driver of #theTormore4 chariot again, but it was great to see GlenDronach catering for the nominated driver. Remember whilst in Scotland you have to abide by our drink and drive rules with a zero tolerance approach, its best to opt for the labelled samples to enjoy at a later date. Hence why I can now bring you my thoughts on each whisky, including 2 specific distillery exclusives and the current (at the time of writing) bottle-your-own Manager’s Cask. 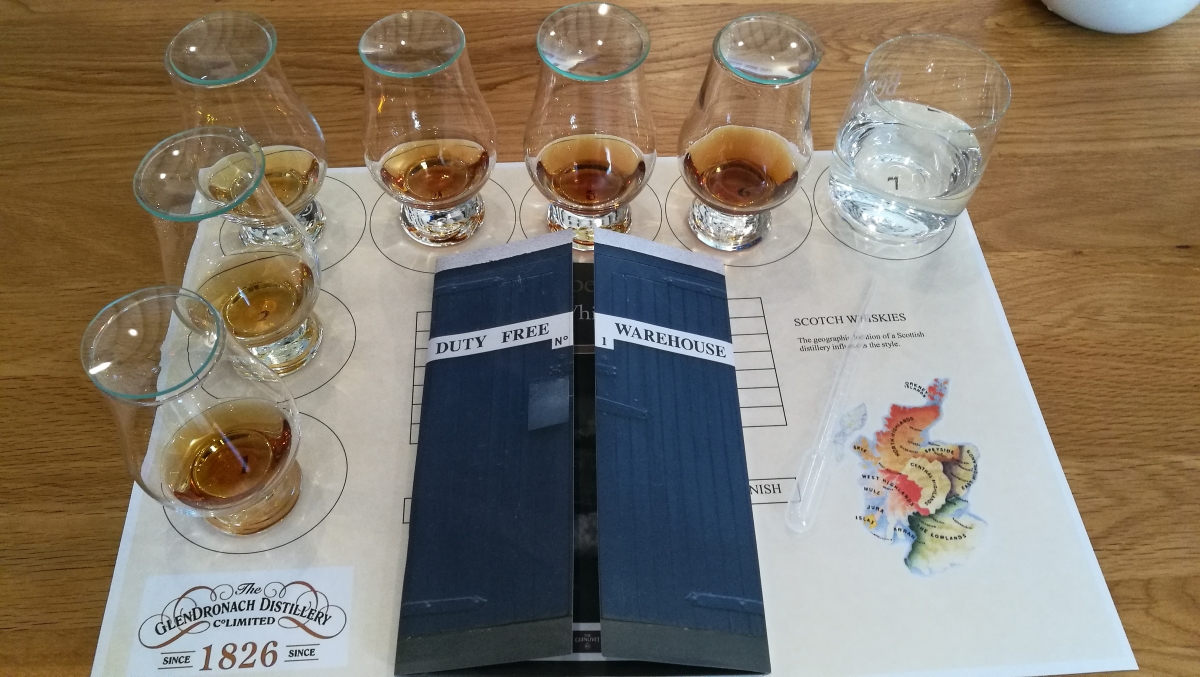 Colour: a bronze rubbing
Nose: almonds coated in dark chocolate, also caramel and a ginger freshness. Also evident are cherries, raspberries and spent matchsticks. Returning to the glass gives syrup tart and honeycomb plus ginger ale! With water cloves are noticeable.
Taste: more chocolate and treacle, almost a Black Forest Gateau cake in some respects. Honey and olives, there’s a bitterness from the wood that is firmly in place – with water cloves and grapefruit come through.

Overall: a stronger opener that leaves you excited as to what follows, rather than looking back with fondness.

Bottled at 55.3% strength and containing whiskies from Pedro Ximenez and Oloroso sherry casks.

Colour: honeycomb
Nose: punchy arrival with cherries and strawberries. There’s plenty of redness here with cranberries, marzipan, ginger and orange marmalade. Water unlocks apricots and fudge notes.
Taste: surprisingly restrained at first, as I was expecting a dominant sherry beast. Instead its more rounded and salacious with dried cranberries and marzipan again. Raspberries inject some sweetness and then an assortment of spicing with cinnamon, dried fruits and candied orange.

Overall: there’s much to enjoy here for the asking price of around £55. A very solid session dram, with just enough edge to keep your interest.

Bottled at 56.1% strength and containing whiskies from Pedro Ximenez and Oloroso sherry casks.

Colour: a rich amber
Nose: initially its strawberries and golden syrup with a hint of creaminess. Then a satisfying blast of sweet cinnamon followed by figs and then more spices with all-spice and nutmeg.
Taste: a nicer texture and less of the alcohol even though this one is slightly stronger. More marmalade but the orange is muted with dark chocolate, strawberries and meringues. Towards the end more vanilla and some black pepper.

Overall: this is my favourite of the cask strength editions. It just has that little touch of glass and elegance that separates it from the bravado of the 5th release.

Cask number 1441, bottled at 57.7% from a sherry puncheon available at the distillery as the current bottle-your-own for £85.

Colour: cherry wood
Nose: some classic notes here but a noticeable herbal vibe is in the mix. Black olives sit alongside red liquorice, cranberries and red apples. There’s an element of cherry as well, beeswax and raspberry jam. Tarragon cuts through the sweetness with an earthy resin, orange marmalade and sweet cinnamon.
Taste: rich and decadent are the initial emotions. It’d be too easy to replicate the nose with colourful red characteristics on the palate. It’s the spices that grab you here.  Nutmeg, cinnamon, cardamom and vanilla. A dark chocolate finish with Brazil nuts. Maple syrup, treacle and plump cherries.

Overall: well, #theTormore4 walked away with 4 bottles of this after the tasting so that should give you a summary of how it went down. It’s only now that I have that moment to sit down and appreciate it fully.

Bottled at 53.2% strength, this single cask #3399 is only available at the distillery and will set you back around £130.

Colour: mahogany
Nose:  a deep intoxicating resin laced with cinnamon and cloves. There’s a beef dripping quality assisted by walnuts and furniture polish. The fruity warmth of poached plums is noticeable, as are the cherries.
Taste:  a lovely texture and childhood memories of conkers and cola cubes. All-spice, cardamom and some sweet cinnamon with liquorice. There’s a rich creaminess offering balance with the driving force from the sherry cask. Molasses and blackcurrant jam with vanilla round off a satisfying experience.

Overall: I’d be happy to pay £130 for a bottle of this but I was limiting myself to the Manager’s cask upon our visit. It’s a chunky but well balanced GlenDronach and is a real crowd pleaser.

Bottled at 54.1% strength, this single cask (number 1189) is only available at the distillery and will set you back around £130.

Overall: it’s a close run thing between these 2 distillery exclusives both from 1994. Cask 1189 is I think the more interesting, whilst its brother is more immediately accessible. My favourite overall is actually the Manager’s Cask that on paper is a bargain and delivers.


The Connoisseur tasting rounded off a delightful start to our Speyside Super Sunday. Before too long after claiming our bottle-your-own souvenirs, we were back on the road towards Dufftown and lunch, followed by some whisky ice cream, Glenfiddich, Aberlour and then Murray McDavid Art of Blending, to bring to an end a marvellous few days on Speyside. Yes, I seem to be doing these events in reverse order somehow, but whatever way you approach this festival, it’s a formidable catalogue of events and experiences.
CategoriesUncategorised