Whisky like so many things in life is all about discovering and expanding your knowledge and appreciation through experience. This sphere of alcohol is home to many trends and fashions that become almost periodical in their appearance. One noticeable pattern is the self-appointment of whisky consultants and writers from a variety of backgrounds. There’s very little stopping a homebrew blogger from claiming to offer and excel in consultancy, brand work or my own personal favourite; an influencer.

You can quite easily nowadays create a brand, buy and stock polo shirts or Glencairn glasses with your logo and proclaim to be the next Charles MacLean. In reality I couldn’t care less and ultimately if you care passionately about whisky and discovery, then you’ll identify reliable sources almost without realising it.  For the committed such avenues as Sunday Brunch, columns in magazines or newspapers offer little meaningful information other than what fashions to avoid. Apart from the gospel of word of mouth, books themselves are a vital resource for the general facts and history of whisky. Whether its tales from a bygone era of illicit distilling, lost distilleries or the fundamentals of maturation, collectively they offer a vital resource.

When I was asked whether I’d like to review the debut book from Blair Bowman I accepted, as I’m always interested in how someone has tackled the realm of whisky and created a piece that appeals to all levels of experience. I’ve met Blair a couple of times (albeit briefly) normally in-between tastings with a faint memory of dashing between Dufftown events whilst carrying a box of whiskies being the last occurrence. Blair unlike many of the aforementioned blogging sphere does have an influential history in whisky starting with creating World Whisky Day as a student in 2012. There is some animosity around this creation, harboured by some who prefer the Michael Jackson international whisky day to honour the legacy of the acclaimed writer in 2008.

Personally, I have no real preference as everyday could be a whisky day given the choice. Blair eventually sold the rights to his Day in 2015 to the publishing firm Hot Rum Cow for an undisclosed sum, before joining Uisge Source as an international business development manager. In 2016, he moved into the realm of consultancy and writing and the Pocket Guide to Whisky is his first entry in a very competitive genre. 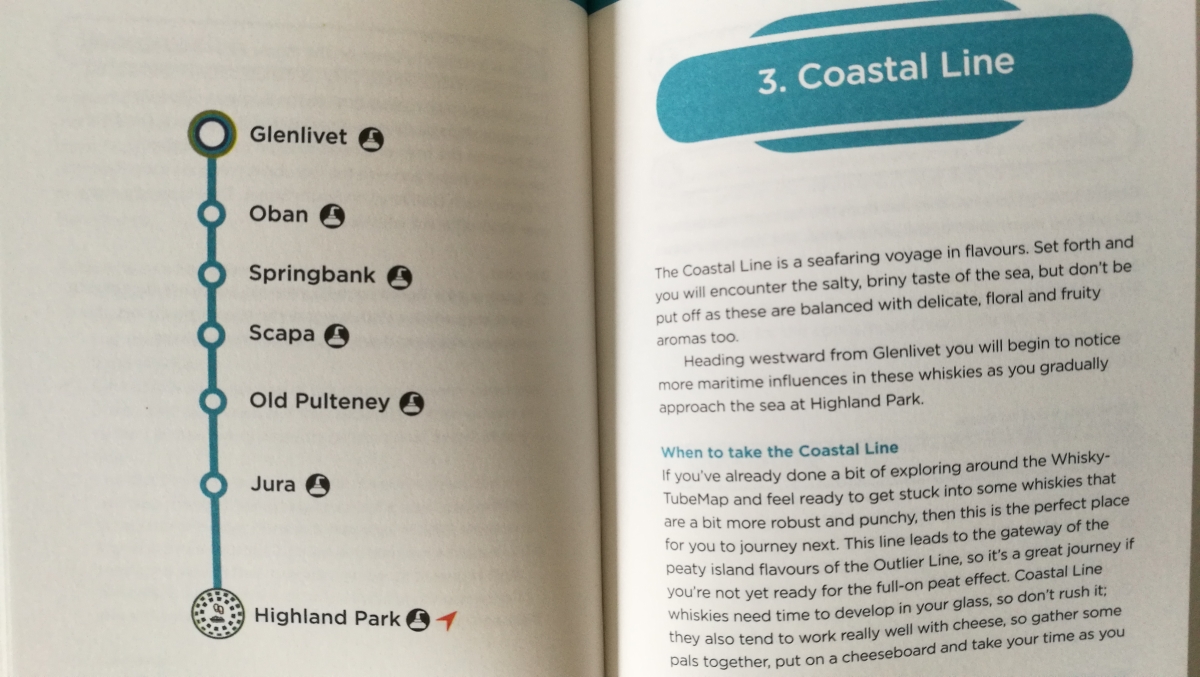 It’s worth underlining that the heart of the book is the whisky TubeMap and this concept was developed by Nikki Welch for her Pocket Guide to Wine, published a couple of years ago. Rather than the flavour wheel we’re so used to in whisky circles, the TubeMap allows you to explore similar features of whiskies that you enjoy. Whether you wish to push your experience by heading for the end of the line where the flavour is at its most extreme, or change lines at an interconnecting distillery; it’s all within your control.

As this is a pocket guide, the line isn’t an almanac of all things whisky. It’s been simplified to 2 pages and for newbies to whisky, everything is to hand and easy to grasp. If your knowledge is a little more detailed or expansive then you may question some of the omissions or station order developed by Blair. There is no Tormore for instance, which is a bitter disappointment but knowing its characteristics I can place this whisky within the map. The Additional Whiskies Index offers some suggestions to brands and whiskies that are not contained within the map itself as stations, and where these should be located. For instance, another oversight is Clynelish, but unlike Tormore, this is within the Additional Index and quite rightly falls within the coastal line.

Personally, I would have kicked Glenmorangie off the Decadent Line and stuck it onto the Easy loop where my taste buds suggest it should reside; arguably at the expense of Tamdhu or Benromach that deserve to be elsewhere. Dalwhinnie on the Amber Line? Springbank on the Coastal Line? Yes perhaps, but midway below Scapa and Jura? I’d love to see the reaction of someone tasting one from Campbeltown’s finest after moving up from Oban. We could go on for infinity regarding placement, but at least it prompts debate and discussion.

In essence it’s the flavour wheel reinvented for a new generation and I welcome this. I can recall starting out on my whisky voyage, when the books were a little dusty and old-world-like pitched to the more experienced end of the market. For me, all those years ago, the whisky process was very much trial and error. Making my own choices and seeking out sources that were reliable and in tune with my own preferences was a key component. Nowadays, whisky sadly isn’t as affordable as it once was and arguably as tasty. This has been counterbalanced by the promiscuity of the internet, an annual bible and those aforementioned self-proclaimed experts. However, the most reliable sources remain friends, word or mouth, whisky festivals or clubs, or maybe just taking a punt yourself and seeing what takes your fancy. 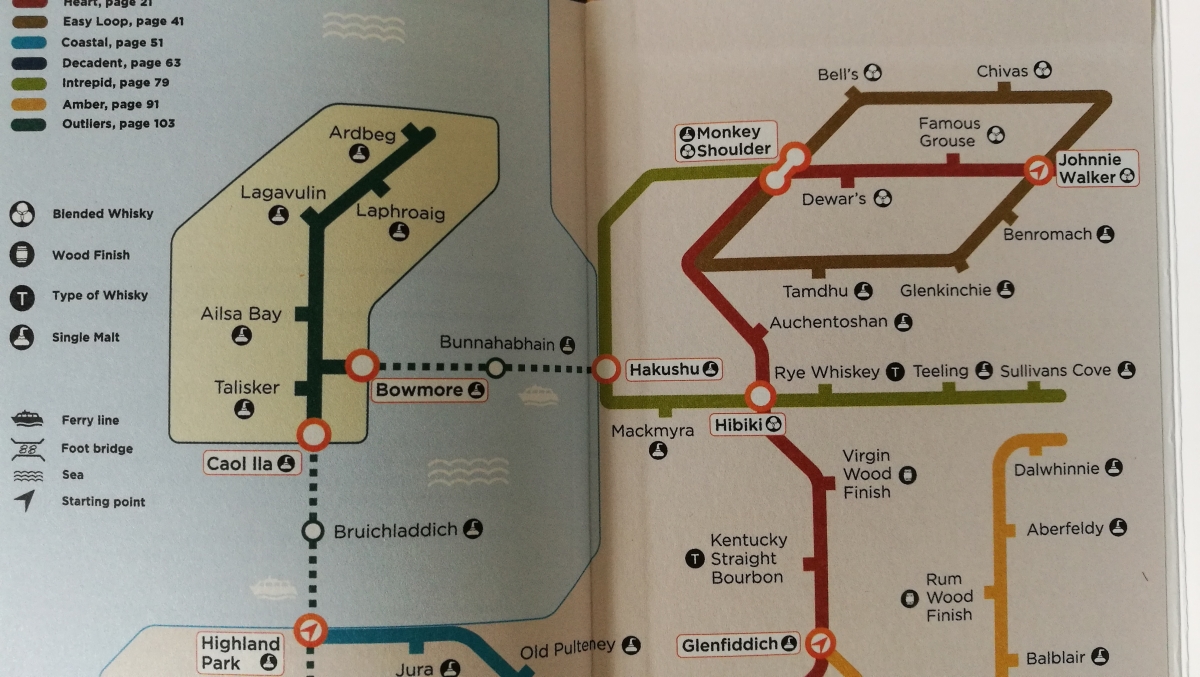 Devouring the Pocket Guide to Whisky over the past fortnight hasn’t provided me with any new insight or boring facts to bounce off fellow enthusiasts about distillation or soil types. Yet, what it has revealed is that this book does have a place for those just commencing their whisky journey. Being fortunate enough to bathe in Port Ellen and use Jura to clean the dead flies from my car, I can still just recall what it was like to be bamboozled by the array of whiskies and possibilities. The poor purchases I instigated during those formative years and then the horror of sitting down with a whisky I didn’t appreciate. Folk state they don’t like whisky, which is rubbish, as I always reply that they just haven’t found the one they like yet. Finding that bottle is half the fun of whisky and much like wine, seeing your palate develop over time and experience as you seek new destinations.

At the heart of the book is the map and whilst limited – I had expected a more sizeable tourist fold out utilisation truth be told – I would have found it invaluable during my rookie years. A couple of facts under each distillery follows, as does how to enjoy your whisky. Being the critical sort, with any future editions I would expand the map and ditch the virtual setting the scene as a waste of space. The best way to enjoy whisky is either with friends, or at home in your whisky den whilst listening to Melt Banana or a salvo from Boris. Look to expand the interesting facts or what makes this distillery unique and include specific examples of bottles to seek out thereby providing an underground to the line itself. The layout is intuitive but there are half page gaps which is suggestive of either not enough research being carried out, or a tight deadline for publication. At the rear is a catch all section that includes cocktail recipes, troubleshooting, collecting and storing whisky along with myth busting.

Overall the gaps are a moot point, as this is a pocket guide in essence for a worldwide phenomenon. If this publication attracts more to the whisky realm and acts as a gateway to the delights that await, then fantastic in my book. If you’re more versed in whisky matters, then it’s little more than an occasional conversation piece. Having been given this book for free, I’ll make sure it is passed onto someone who I think will benefit from its use.