At the turn of the year I nominated a couple of distilleries to focus upon during 2017 and one of these was the Balvenie. It represents one of those classic Speyside distilleries that we all at some time during our whisky voyage pass through. I’ve not done too badly so far with the 15-year-old Sherry Cask release being a solid experience.

There’s very little to dislike about Balvenie or criticise and it remains immensely popular, especially in North America. The problem has always been for me that once you’ve sampled and experienced, you move onto bolder and robust whiskies, rarely returning. In some respects, that’s just a reflection of how much choice we have nowadays as whisky drinkers. There are whiskies out there that I really enjoy as staple drams such as the Talisker and Ardbeg 10’s, but I’ll never return to them simply because I have to feed the monster that is Whisky Rover.

One growing trend in whisky is the pairing with food and why not? During my years I’ve had many a fine meal accompanied by a lovely selection of well-chosen whiskies.

In fact, I have a tremendous meal planned for November as part of the Whiskybase Gathering that will feature only closed distilleries. I have no idea what Dutch cuisine is all about, but if it comes to it then a liquid lunch is a viable option, followed by a pizza (if they do such a thing) on the way back to my hotel room. Seriously though, there are many fond memories around a table with complete strangers experiencing fine dishes, enhanced by a whisky. A personal favourite being the Scotch Malt Whisky Society at the Illusionists Table; recommended for anyone during the Edinburgh Festival. A word of warning; don’t drink the whisky like wine.

It was a virtual table I sat down with others from across the country on the 7th June for this Twitter Tasting compared by the Whisky Wire and featuring the presence of Balvenie and their UK Brand Ambassador, Alwynne Gwilt. It offered some much needed respite with a formidable day ahead with my own sold out Closed Distillery and Distillate tasting in Edinburgh and the nuisance of another General Election. 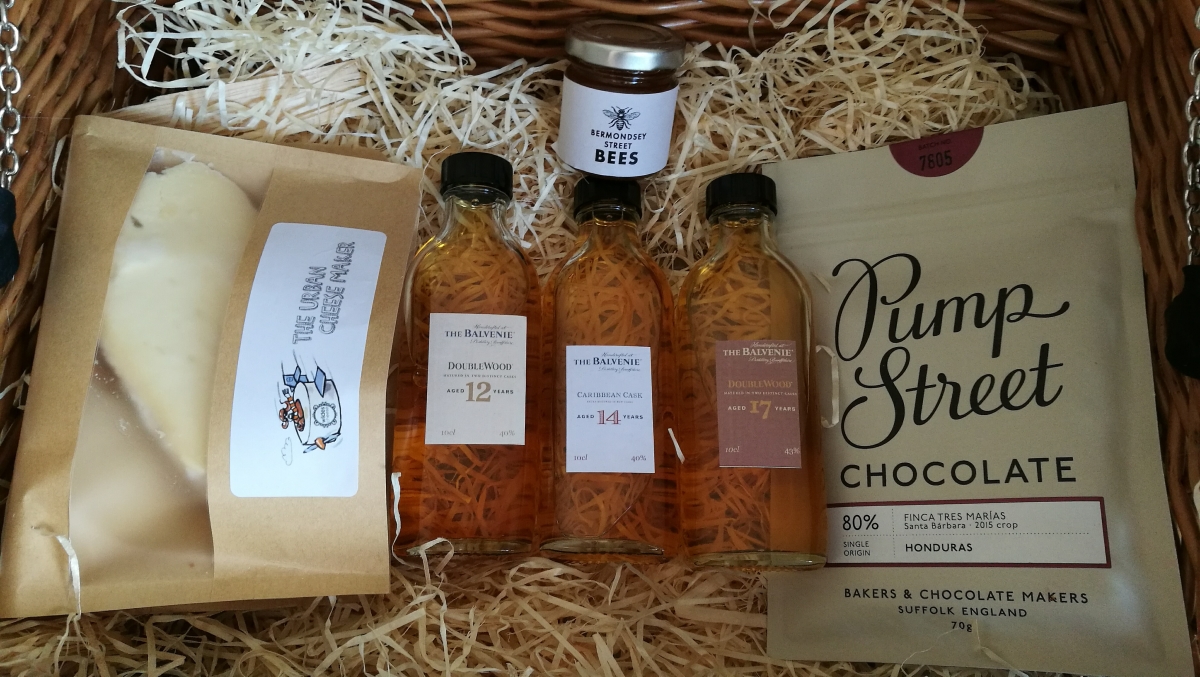 On the menu we had the trio of classic Balvenie whiskies in the form of the DoubleWood 12-year-old, Caribbean Cask 14-year-old and the DoubleWood 17-year-old. This trio were very familiar to me and I expect to many readers, but this time around they were accompanied by specially selected ingredients of honey, chocolate and cheese. Made by artisans these were featured amongst the Balvenie Craftsmen’s dinner series, hosted by Michel Roux Jr and available online here.

The program is a celebration of artisan craftsmen from up and down the country, which is now in its second season. This is home turf for me as I’ve always been a strong supporter of local farmers and craftsmen, as seen when I commissioned Frazer at FAR Cabinet Makers, who lives further up the Fife coast, to build my whisky display cabinet. If Balvenie are looking for talented craftsmen for their 3rd season, then they’d do well to take a look at what Frazer is creating. Clearly, I’m not alone in need for a splendid vessel to store and display some of my finest whiskies, as this partnership was the genesis for further whisky cabinets of all shapes and sizes. Yes, as with all artisans, things can cost a little more but the end result is always worth that extra and thus its the same with whisky.

Prior to sitting down for this tasting extravaganza, I watched the episodes for the latest season that underlined the care and dedication that each of the producers bring to their own speciality. The meal hosted by Michel featured a special single sherry cask Balvenie brought down from the distillery by Alwynne to finish off a memorable event. Touches of Balvenie also featured throughout the courses themselves, as you can see.

We have honey from the Bermondsey Street Bees that feed on the flowers throughout private gardens across London. This will be on interest, as I prefer the Highland heather honey generally and have enjoyed the gift of private stock from friends on the Isle of Skye. Then we have a cheese that has been washed with the Balvenie from Wildes Cheese and again comes from the capital. I’m a huge of cheese, but rarely have the opportunity to engage with anything beyond cheddar due to my better half disliking almost everything else. Cheese like whisky is best shared and enjoyed, as is chocolate although I appreciate the art of sharing may be more difficult to replicate. The presence of Pump Street Chocolate was required for our bean to bar chocolate.

Now, I appreciate many enthusiasts will be reading this and thinking what a load of nonsense. Having recently seen men in sea monster costumes to launch the Ardbeg Kelpie; I’d suggest that is nonsense. Instead, there is a validity between the art of craftsmanship whether its food or whisky. Yes, the link is tenuous at times given the huge scale of production across distilleries nowadays including the Balvenie. I’ve had several chats with fellow whisky enthusiasts about what actually constitutes craft nowadays? This arose in my Waterford Experiment piece and is best left for another article.

For our Tweet Tasting the important aspect at Whisky Rover is the interplay between the whisky and the food elements. To underline this I’ve reviewed the whiskies as I would normally, but added a separate section for my thoughts about any possible marriage. Ready? Shall we begin then…

Colour: butterscotch
On the nose: an approachable assortment of raisins, marzipan, honey and vanilla unfold. Those typical sherry notes such as cranberries, ginger, sweet cinnamon, cola and some nuttiness that adds a little more depth and substance. It does require a drop of water to open up and relax.
In the mouth: just a lovely and simple whisky. Yes, some may view it as inoffensive but I’d rather view it as a classic refined everyday dram. More of those nosing notes coming through on the palate now with a rich seam of vanilla, some added Brazil nuts and milk chocolate. It would certainly benefit from a higher strength as in this form is remains idly passive.

With the accompaniment of the honey from Bermondsey, it initially marries very well before amplifying the whisky. It’s impressive from this stance but such is the power and longevity of the honey (and I was only using a few drops) that it outlives the whisky itself.

Bottled at 43% strength and featuring that additional set of maturation in a rum cask, expect to pay around £50.

Colour: peach skin
On the nose: the effect of the rum cask is most evident across the nose with sun kissed aromas such as coconut, lemon peel, mango and pineapple. There’s a bucketful of vanilla with lemon loaf and freshly baked shortbread. Followed by a light brown sugar dusting more ginger and a resin-like quality resulting in a very approachable and summer themed nose.
In the mouth: fails to live up to the nose with most of the fruits moving aside for a strong vanilla essence, golden syrup sweetness, oranges and shortbread once again. A reasonable brown sugary finish with elements of nutmeg and cinnamon tries to resurrect the overall experience. It’s very inoffensive and immediately approachable. If Glenfiddich is the Ford Fiesta of whiskies then this is the sun weathered Nissan Micra; a bubbly and inoffensive whisky that will appeal to the masses. No, that’s harsh, actually make that a Nissan Qashqai.

With the accompaniment of the cheese from Wildes, there’s an immediate symmetry between the creaminess of their creation and the wood of the Balvenie. A Fellowship of understanding and harmony, a more successful marriage than the honey which is surprising.

Matured in 2 types of cask before being bottled at 43% strength, expect to pay around £91.

Colour: sandal wood
On the nose: an intense nose with delicate layers of toffee, maple syrup and cloves. Beyond awaits 5 spice, cinnamon, apples, a twist of lemon and a concoction of shoe polish and freshly waxed leather footwear.
In the mouth: woody initially, which I wasn’t expecting before it then moves into a  vanilla lemon sponge; no maybe curd now and some bacon bits. Moving on Crème brûlée which accounts for more vanilla and a faint toasted edge. Of the trio this is my least favourite, partially because of the asking price that doesn’t really represent a significant leap forward over the 2 younger siblings.

Combined with the Pump Street chocolate initially there’s a quarrel, disharmony but then the sides come together in mediation. There’s still an alcohol presence before diving once more into the chocolate rum like concoction.

A very thought provoking evening with acquaintances and complete strangers brought together by the Balvenie to feast upon its whiskies and artisan producers. Of the trio my favourite whisky was the 12-year-old partially due to affordability but a higher ABV would be a request. The cheese pairing was the most alluring from the evening and full of flavour.

Summarising this evening also revealed a couple of overlooked elements that I had not envisaged. Firstly, the increasing cost of whisky since I last reviewed this trio a couple of years ago as prices have increased. Albeit not dramatically, but just enough to notice now and this isn’t just a particular criticism of Balvenie rather the industry as a whole. The other aspect is that its often good to go back and engage once again with whiskies you’ve left behind. This trio are very agreeable, much like my Tormore4 brethren, however they lack that depth of character to truly capture your attention.

Efficiently engineered and delivered, its a slick brand and as a whisky should be your gateway onto greater delights. A memorable combination of the Balvenie and the Whisky Wire livened up the Tweet format albeit with the usual thrust of ass-kissing comments. Sometimes I do feel like the only voice of reason amongst a garrison of crazed orcs.