A conspiracy had deprived our #theTormore4 group of a key member, but at the same time, it had reunited the remaining trio for our 1stday on Speyside. The opening gambit on our long weekend of whisky delights was a tour of Glen Keith distillery.

Why Glen Keith do you ask? Good question, the distillery is normally closed to the public and three-quarters of our membership had yet to tour the distillery. I myself had managed that feat during the 2014 incarnation of the Spirit of Speyside Festival and had opted against touring it again in 2017. At £60, the tour included a full-sized bottle of the current Glen Keith cask strength release thereby making things more palatable. This was a feature Chivas had instigated across many of its tours during the festival, with those fortunate to visit the glorious Tomore, receiving its own cask strength release. Having politely refused to follow the remainder of the group, I opted for Dalmunach distillery only to make up the vacant spot when Dave could not join us until Saturday morning.

We pulled up at Strathisla and settled down in their lavishly furnished lounge area for the tour to commence. Why Strathisla? Well, the two distilleries have been linked in many ways and this continues. Today, they may share management but their ties go back decades with Glen Keith being the research facility for Chivas. There’s much speculation as to what happened within the walls of Glen Keith during the hotbed of experimentation during the 1960’s and 1970’s. It’s all a little secretive and mysterious which adds to the intrigue and desire to visit this distillery. The offices and laboratories are still on site, situated next to the impressive still room at the distillery. During our visit we were being observed by women and men in white coats in the courtyard area; for a moment it felt like we had stumbled across a secret facility.

The current assistant manager of Glen Keith and Strathisla ushered our party out through the backend of the distillery. Even from behind this distillery still looks photogenic and has much to admire. Yet, this wasn’t our destination as we walked along the river bank that connects both distilleries and then a section of the old railway that is no longer used. As we climbed the stairs to traverse the old tracks, it felt like we were stepping back in time and you could image steam trains powering their way across Speyside laden with filled casks.

Only a couple of minutes later we were standing outside the splendid exterior of Glen Keith. This was the first distillery created in the region since Glen Elgin in 1898. In fact, I’m sure the famous architect, Charles Doig, remarked that upon completion in 1900 that it would be the last distillery for decades. A remarkable bit of forecasting. Truth be told much of Glen Keith prior to its transformation in 1957 as a distillery, was a former corn mill. This may account for its historical exterior rather than the more efficient and functionary distillery builds that were to appear in the next decade. 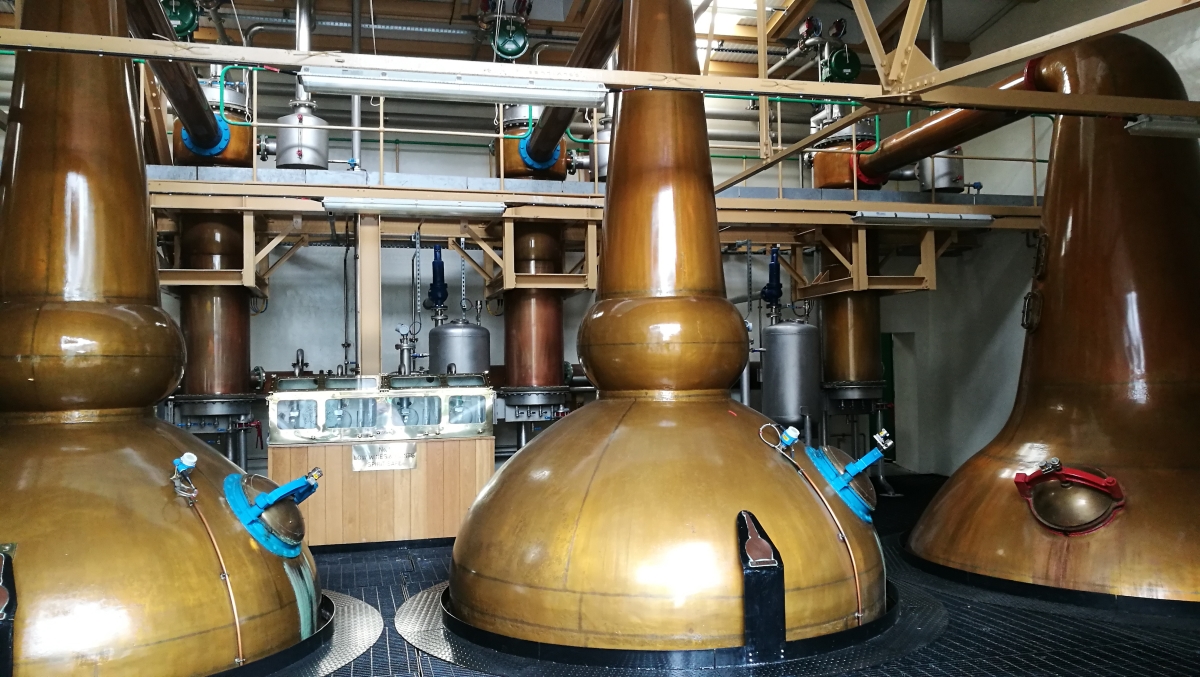 Internally Glen Keith has benefited from the extensive refit that prompted its revival in 2013 following its mothballing in 1999. This has added a more modern and efficient atmosphere with computerisation evident throughout. We discussed the early life of the distillery alongside its boundaries before being ushered inside and climbing an endless array of stairs until we reached the mill, which predates the refit.

From here we descended until we arrived at the most impressive feature from its overhaul; an epic-sized mashtun. This is a serious piece of kit. Almost UFO-like in its size and shape, it’s a statement piece and is overseen by a nearby console desk. For our tour, this was the only employee we witnessed on site. This could be a reflection of its efficiency nowadays as several Chivas distilleries are capable of being operated by just 1 or 2 employees.

Whilst our Assistant Manager guide fielded questions, my own thoughts drifted towards the courtyard behind where Chivas tankers waited to take off the spirit to a more central facility. This is the way of the whisky world nowadays. At times it is arguably stark and a little characterless and I am more of a traditionalist like so many others. However, there is also something dominating about such technology and its application that ensures consistency. Glen Keith isn’t let’s be honest, handcrafted or traditional, but nor has it claimed to be as such. It has enjoyed a riotous youthful history full of experimentation and dabbling in unknowns before settling down into a more rudimentary and efficient existence that we know today. The whisky, in my opinion, has always been solid and because it doesn’t have much of a following, it remains affordable.

Refocusing my attention, we moved away from the mash area and reached the 1 of 2 washback rooms onsite. These were all impressively maintained and we were allowed to explore the room ourselves, whilst I looked up at the ceiling where some further renovation is required. There’s little else to say about the washback room as is per the case in most distilleries. We could talk about production and fermentation but lets not, instead, our next stop is often the highlight of any tour. The still room at Glen Keith is the heart of its legacy as a place of experimentation. Here they originally practised triple distillation before settling on the traditional Scottish approach. Today, it’s an impressive cluster of still with the long lyne arms capturing your attention.

With no warehouses on site, our party was ready to retrace our steps back to Strathisla for a tasting of the Cask Strength Glen Keith, which remains the only current official bottling available at retail. More questions were fielded, before #theTormore4 thanked our guide for her help in bringing the distillery to life. We then made plans to enjoy additional whiskies from this distillery to round off our experience and place Glen Keith in context. I’m actually able to bring these to you below with this miniature vertical that features 2 official and 2 independent bottles from a variety of eras. 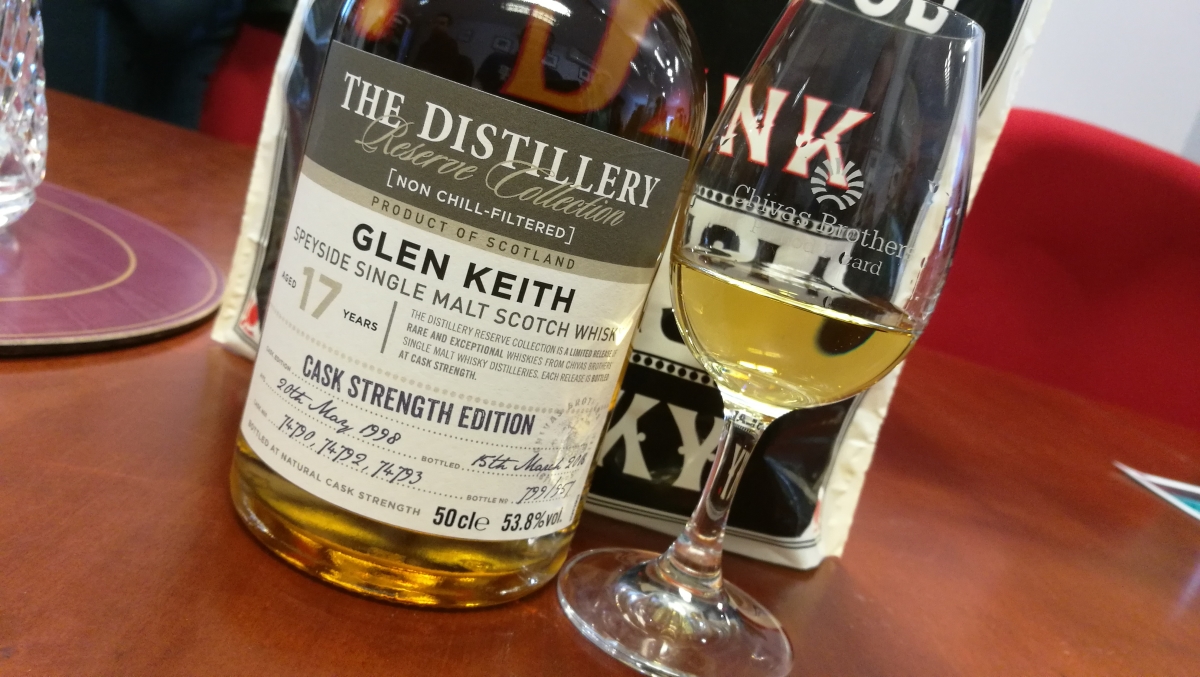 Overall: it’s a very limited Speyside dram upon this presentation with a fruity nature but not as pronounced as the 1993 that follows shortly. A solid whisky, we will see if Glen Keith is capable of more. 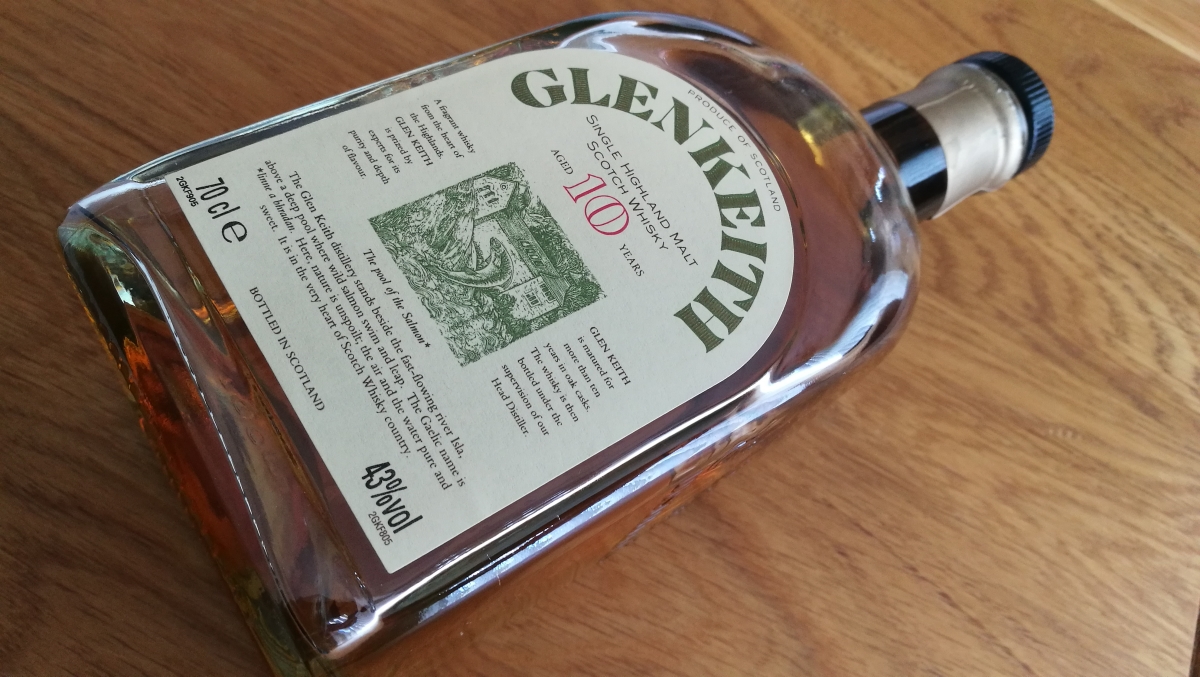 Bottled in the early 1990’s at 43%, this was the first official distillery bottling.

Colour: apple juice
Nose: a lovely fruit salad with apples, peaches, apricots and a little Kiwi fruit. There’s oranges and a touch of sherbet in what is a classic Speyside presentation. Plenty of juicy character with a squeeze of lemon and a ray of sunshine.
Taste: very gentle on the palate with hints of sherbet, apples and oranges. There’s nothing forceful or turbocharged here, instead a touch of cinnamon, caramel, vanilla nougat and a slightly drying finish with marzipan.

Overall: a great wee session dram that I’d hope everyone can appreciate without too much effort. This is a bottle you’ll see at auction fairly reasonably and represents great value compared to what you can purchase down at the supermarket. 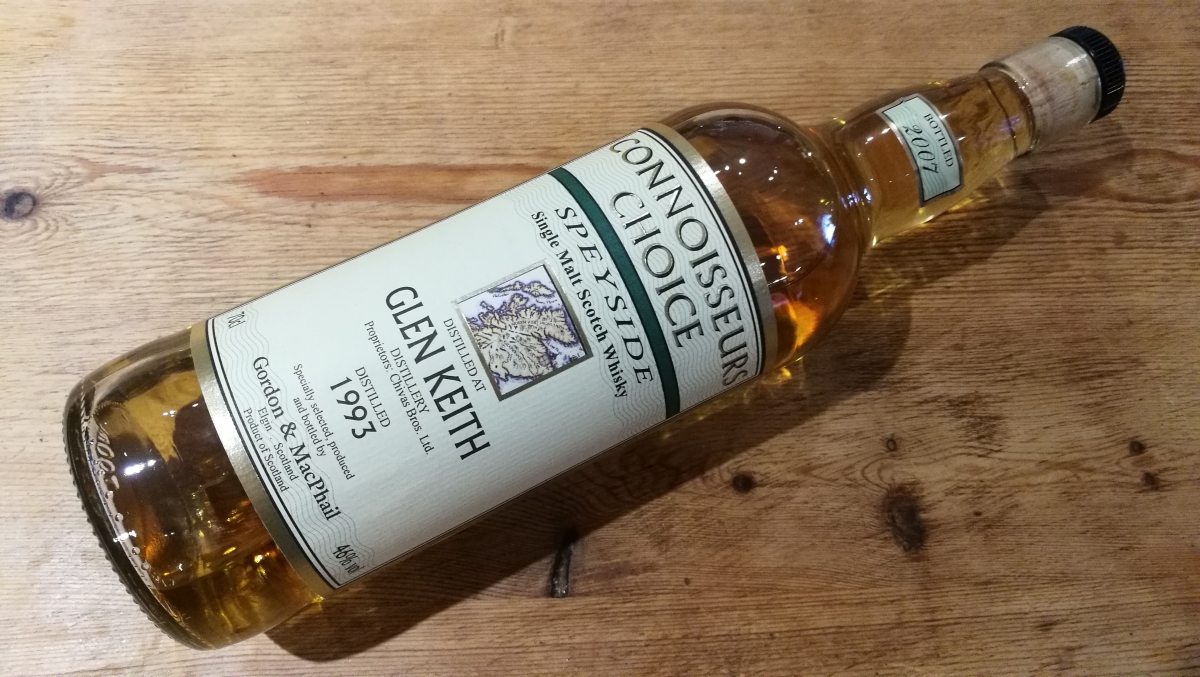 Bottled 2007 at 46% strength at 14 years old, from American refill hogsheads.

Colour: apple core
Nose: a very strong fruit nature with plump apples with a hint of lime at the rear. There’s an icing sugar dusting with flaked almonds and some fleeting strawberries. Sugar candy followed and with the addition of water there’s pears and marzipan.
Taste: again very light with more vanilla and nutmeg alongside the apples and pears. Marshmallows and icing sugar with a touch of sunflower oil and vanilla carry us through Speyside. With a touch of water barley and grapefruit arise.

Overall: I felt this was better without water, as Gordon & MacPhail have pitched it at the right strength. This is a more rounded and detailed whisky than the Cask Strength Edition. More fruity impact and an engaging interplay with the spices. 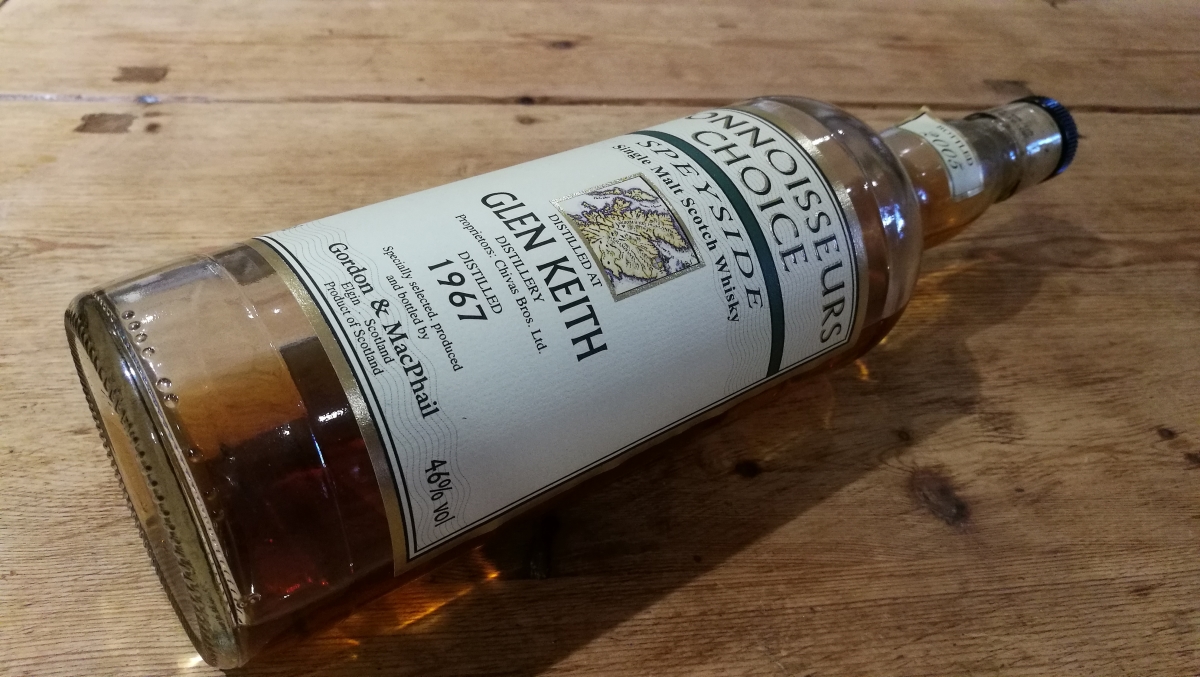 Bottled in June 2005 and triple distilled in November 1967, which puts this around 37 years of age, this is a rarely seen triple distilled Glen Keith, bottled at 46% strength. A combination of 1st fill and refill sherry casks.

Colour: honeycomb
Nose: a lovely assortment of caramelised apples with a lashing of cinnamon. There’s an aged vanilla followed by a slight bitterness then a black Scottish tea. Chocolate richness and a resin quality followed by more of that sweet cinnamon.
Taste: very tasty and in some ways subdued with the wood influences of vanilla, apples and raisins taking over. Stewed black tea, cinnamon, cardamom, dark chocolate and charcoal.

Overall: an experience and a whisky that tastes old but one that also seems out of place within the context of these whiskies. The least Glen Keith of this assortment.

Upon reflection, a great day out at the rarely seen Glen Keith distillery and that’s what Speyside is all about. The new discoveries, friends and possibilities. After an enjoyable day out on the road, we headed home from AnCnoc to prepare ourselves for the arrival of the Dave with a couple of Glen Keith’s to keep us company.

To pull out a favourite here is tricky overall, as they all have likeable qualities but I’m a sucker for the approachability of the 10-year-old. No fuss, well made and one to enjoy with friends. It’s a close call as just behind would be the 1993 Gordon & MacPhail bottling that just captures the essence of why we enjoy whiskies from this distillery so much.

Part of the appeal and vibrancy of the Spirit of Speyside whisky festival is being able to visit distilleries that are normally closed to the..