The Cadenhead monthly outturn has been an onslaught of financial doom, disappointment, wonderful experiences and an expansion of knowledge. Enthusiasts knew that one particular month would deliver a Muhammad Ali salvo of epic proportions and thus one Friday morning, World War 3 was unleashed.

Personally, I’ve had mixed success with the bottles this year. You cannot hope to catch ‘em all despite some believing in a god given right to do so. That particular Friday morning I was beset with technical problems whilst trying to work from home. Once a recovery had been made and some equilibrium established, I was fortunate to grab one bottle for which I’m thankful. Top of my list would have been the 40-year-old Banff, the last cask Cadenheads have from this closed distillery, but it wasn’t to be. On the grapevine I have heard it’s an oddity and one I hope is opened and experienced by all. Its disappointing yes, but it wasn’t a Glen Mhor or Tormore which would have been almost a match for Maybot’s dissatisfaction come 9th June to put it mildly.

Next up on the hit list was a 39-year-old Caperdonich with its epic colour thanks to a long duration in a sherry cask. This distillery is Mark Watt’s (Cadenhead master of ceremony) favourite, who rumour has it never travels without a bottle from this lost Speyside distillery. Unleashing another cask of Caperdonich from the Cadenhead archives must have been a bitter pill. It represents the oldest Caperdonich that I can recall, as normally they’ve been encamped in the teens and twenties.

The distillery itself despite being established on the crest of a whisky boom in 1898, was open for only a fraction of its existence. The Pattison Crisis and its seismic effects on the industry forced Caperdonich to close its doors in 1902. The distillery stood silent for a remarkably long period, until 1965 in reality when a surge in demand brought to life this silent distillery previously known as Glen Grant Number 2. Refurbished internally, the distillery was revived by Glenlivet Distillers and such an event heralded a new name thanks to its water source.

At last Caperdonich was a working distillery and remained in production until the turn of the millennium, when a change in ownership prompted a culling of distilleries within the Pernod Ricard ranks. This ageing distillery with no real single malt presence or history, was an easy candidate for closure and sadly Caperdonich is no more.

The price for this bottle was £360 and an entirely reasonable one given the level of flipping most releases receive nowadays.

Remember those folk orchestrating being first, grabbing bottles to immediately turn a profit? Welcoming auction sites on every corner with their vans, ready to load up and sell? These fellas are responsible for the increasing cost of whisky more than barley, technology or taxation. I’m sure when discussions are held across Scotland and new releases are being formulated, there’s the price they believe is reasonable and then potentially the secondary market prevention mark up. 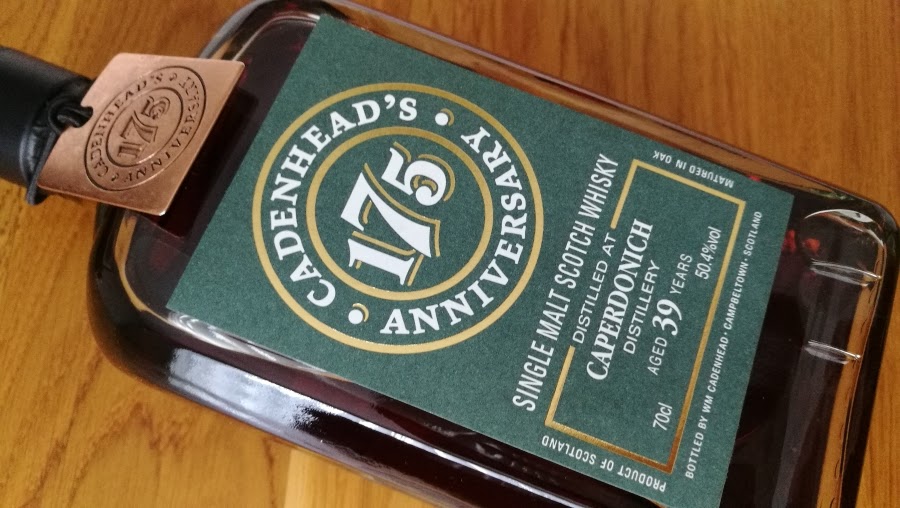 For the record having managed to acquire a bottle that many were dying to try, this was split either into 10cl or 5cl and the cost was split according to the Cadenhead retail price. No profit, no hoarding, just opened, split and hopefully enjoyed. I’ve seen this bottle for sale at one online retailer for £580, a sweet mark-up, and I’m sure it’ll appear on the secondary sites soon enough.

Distilled in 1977, before spending 39 years in a sherry butt and being bottled at 50.4%, resulting in an outturn of 462, needless to say this sold out quite promptly and it’s a privilege to sit down with such a mature statesman.

Colour: cinder toffee
On the nose: immediately the impression is one of a great cask, it has that old wood and distinguished presence. There’s a surprising earthiness and resin-like foreboding as we dive into the cinnamon and flat Cola aromas. Vanilla? Yes, a buttery popcorn as well and plenty of chocolate shavings combining with plump figs, beeswax and those luscious leathery qualities. Hints of treacle, a rich toffee and the freshness of ginger.
In the mouth: delicious symmetry here with plenty of sherry influence but not unbalanced. I’m almost thinking of a Tiramisu with the layers of flavour with cream, sponge and underneath it all that robust coffee influence. Sweet cinnamon, a slight drying finish with elements of raisins and dark chocolate.

Dangerously drinkable, this is a wonderful whisky to sit back with and watch the evening fade away. The nose is invigorating and detailed, with arguably the palate a little more modest but so juicy and ravishing, it’s a shame there’s nothing left.